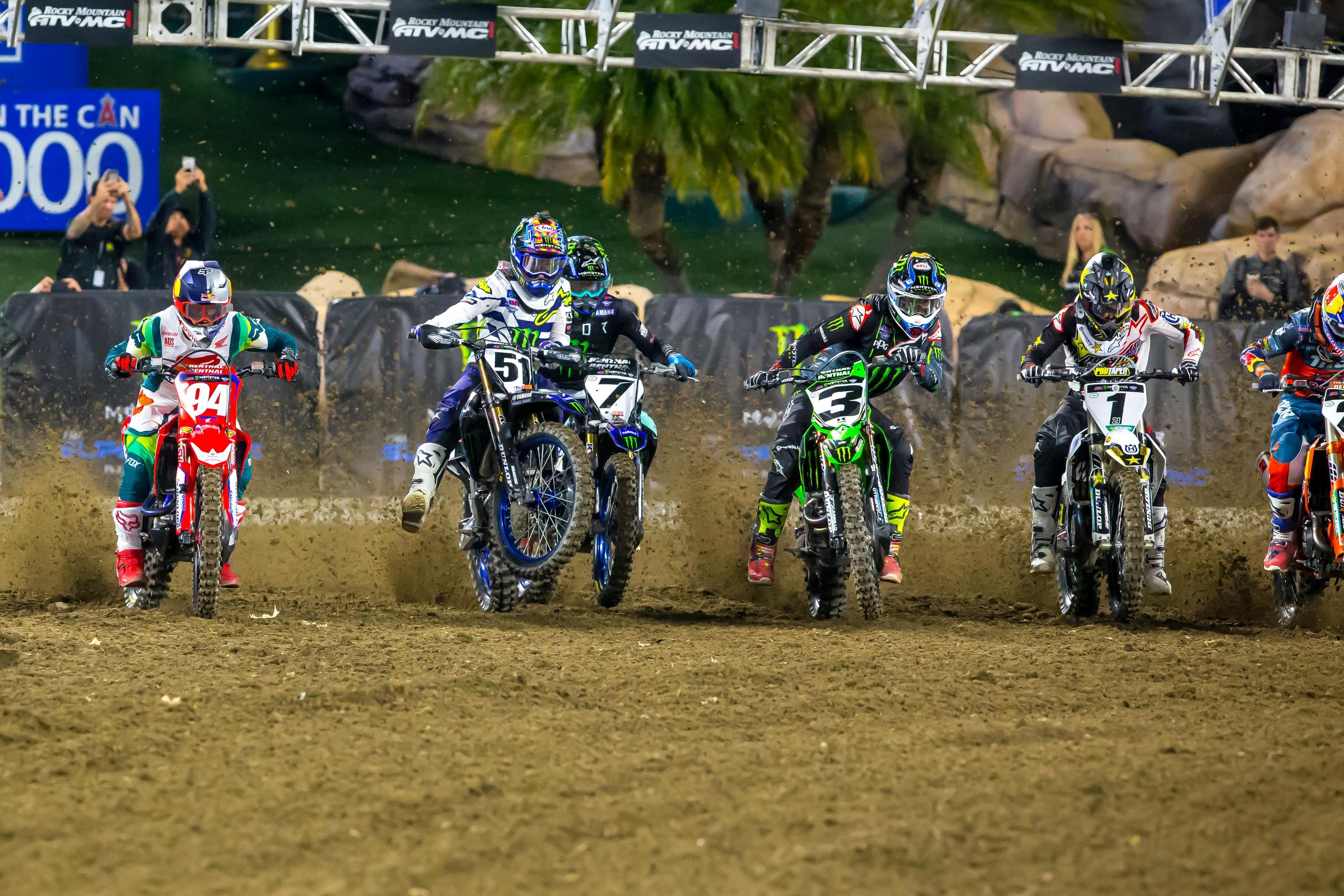 After spending two of the past three weekends in Orange County, the championship moves up the California coast to Oakland. While this venue’s future might be uncertain in other sports, it has provided a great home for Monster Energy AMA Supercross over the past eight or nine years. The weather can be dicey, and the dirt is a bit softer, but overall, this race has become a good one. We have seen James Stewart rise to the occasion (2011), Trey Canard find a win (2015), and an incredible battle between Jason Anderson and Ken Roczen just last season. Say what you want about Oakland, but it has brought a great event nearly every year.

One thing to remember when analyzing an Oakland layout is that the dirt will break down significantly. A rhythm section that looks easy on paper is usually much harder due to ruts, soft spots, and overall deterioration. I would typically have the fastest line as my game plan, but I would also work out an alternate line for the second half of the main event when the track starts to change. For a great example of this, go back and watch last year’s 450 main event and how difficult the track was to navigate for the world’s best.

The start this year is fairly long before bending left slightly. I think we will see a few riders spill into the next rhythm section as these flat corners become treacherous for the ambitious on the outside. The good line will be right in the middle as they will be able to control the first turn and also maneuver for the very important second turn. Many times, a rider will get a great start but then get pinned to the outside of the first bowl berm and lose several spots.

Coming out of said bowl berm, riders enter the first of several rhythm sections. There are two basic ways to get through this section with similar results for both. Coming out of the berm, riders can jump on-off then triple-triple into the following turn. Very simple approach and effective. They might also choose to triple out of the turn, then triple onto the next tabletop-ish jump and off, and still triple into the turn. The dirt consistency, track conditions, ruts in the turn, or steepness of the take-offs and landings could all determine this decision.

The next 90 degree right sends riders over a standard supercross triple and into another fast, open right hand turn across the mechanics’ area. The next jump combo is a bit strange, but riders will either triple up to the top of the tabletop or possibly jump over the entire jump. That would either allow them to step off and single into the corner or double into the corner. I would assume both of these will be attempted but the determining factor will most likely be the initial jump just past the mechanics. The angle of that jump will decide what the riders can execute and what they can’t.

Another 90 right lies before two rhythm sections back to back. Riders will double out of the corner (cutting across the inside of the corner), then have a decision to make. The distances of these jumps is a bit awkward for the traditional plan (2-3-3-1) so I think they may have to check down to a 2-2-3-2 option. That’s definitely a slower line but with the jumps being odd distances (some are smaller gaps than others), riders will have to figure out what’s actually possible.

The next rhythm is preceded by a bowl berm and much more of the standard variety. The ideal line is to triple-triple but most 250 riders will double and then wheelie over the last single and then hit the main triple. The 450 guys might resort to this line as the corner gets rutty but it won’t be much slower.

The only whoops section is up next and in usual Oakland fashion, should break down more as the night goes on. The main event should see riders hopping and jumping through these so watch for Marvin Musquin to figure out an efficient plan early and exploit it. The whoops lead into a bowl berm and finish line jump, guaranteeing some last dash block passes. Word to the wise: go to the very inside in this turn and roll the finish line if you are in the last qualifying spot.

After the finish line, there is a left-hand sand turn that once again crosses over the start straight and into a short double. A left-hand berm sees more sand and then dumps riders back into the first turn.

Can Justin Barcia salvage the weekend and stay in this title fight?

Did we see the beginning of Eli and Marv’s return to winning form?

Is Cooper Webb for real?

Shane McElrath put himself squarely back into title consideration with an impressive win.

Eli Tomac found his rhythm in the final main event and looked like the real Eli for the first time in a main event this season.

Ken Roczen may not have a win, but he still holds that red plates.

Jason Anderson suffered an arm injury and will be out a while.

Justin Hill is capable of leading laps in the 450 class but hasn’t found a way to put that result on paper yet.

Adam Cianciarulo was in prime position to win the first main event but a small mistake spiraled into a rough night. He will win more races this season, but he has to figure out a way to minimize the mistakes.

Sean Cantrell hasn’t had a great 2019 yet but there is still time to leave his mark.

Feld announces the series will move away from Oakland in 2020 in favor of two Vegas rounds.

Jon Gruden comes over to watch some racing action, dropping useless clichés at every turn. He says Roczen has great fire, Tomac is a guy you’d want in your locker room, and Musquin is the prototypical leader of men. Great stuff, Jon. Thanks.

David Vuillemin is simply unbearable after both of his riders win their respective main events.

I spend several hours trying to decipher the difference between a thumbs up and shooting a finger gun at someone.

With two French riders winning their main events, Oakland fans sit through two podium speeches in which they have no idea of what was said.