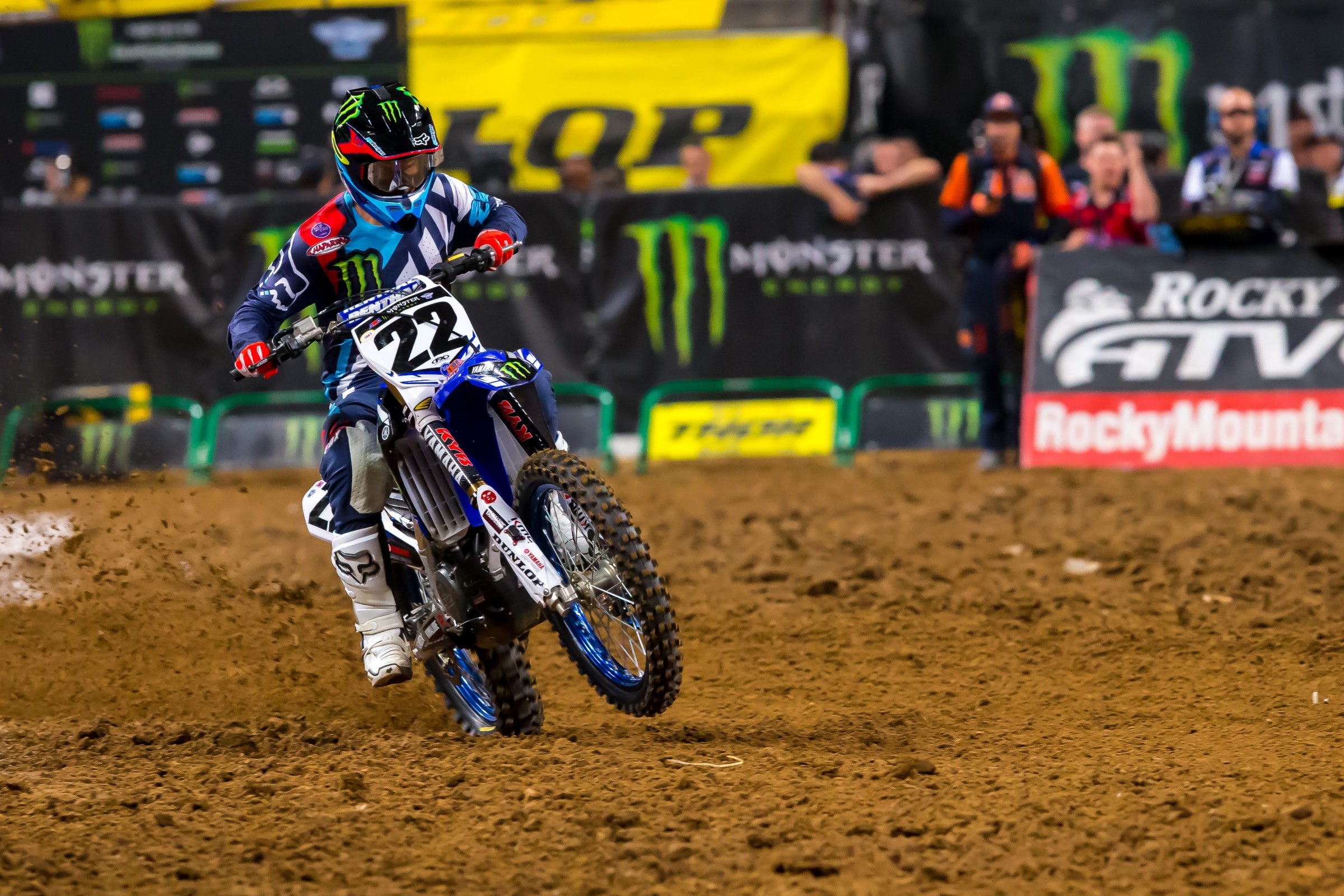 Well, that was fun, wasn’t it? As if this 450 title chase needed any more excitement or suspense, Chad Reed and Ryan Dungey had a run-in that will be the topic of most debates this week. In the spirit of full disclosure, I am very good friends with Chad Reed. I was his riding and training partner for seven years and spent holidays, vacations, and more time together than most people should. I want to make that clear as I want this article to be as transparent as possible. Having said all of that, I am not here to take sides or lobby in the court of public opinion for Chad or Ryan. I simply want to walk through the situation and add my perspective.

From what I understand, this whole mess began in Detroit. In the first turn of the main event, Ryan and Chad locked bars and Chad hit the deck hard. He lost a lot of skin and even more patience. For Ryan, he didn’t get a good jump out of the gate. With the way Eli Tomac has been riding, Ryan simply can’t afford a bad start. As he was jockeying for position going into the first turn, he knew he needed to force the action and hope to sneak inside of those in front of him. The problem with forcing action in this spot is that it involves heavy contact. If Ryan can bump those in front of him a bit deeper into the first turn, he can create a vacuum to turn sharply inside and come out with a good start.

I can only speculate, of course, but I have seen this work before and desperate times call for, well, you know the drill. At most, he was trying to create room and an opening on the inside. At the very least, he was simply fighting to make the most of a bad start. In any case, he got entangled with Reed and there was a big crash. Ryan undoubtedly had zero intention of Chad going down, but often times there are crashes that no one intended.

As for Chad, we all know that 2017 hasn’t been the best series for him. He’s had highlights, like Glendale, but he hasn’t been able to consistently put himself up front. One of his biggest hurdles, among many, has been poor starts. The field is healthy and too deep for Chad to overcome any setback. Starting 15th is certainly a big setback. So, as Chad came into the Detroit first turn near the front, he had to be energized.

With Chad’s bad starts this year, he needed that good start and felt he had one. When he and Dungey collided, that went out the window and he was dead last again and missing a few layers of skin, too. Chad was upset about the incident and blamed Ryan for causing the pile-up. Right or wrong, at fault or not, that’s how Chad viewed it and he was fresh out of patience as St. Louis arrived.

My opinion is that there was racing blame to be aimed at Ryan, but Chad also suffered from a build up of frustration. He was angry at the season and that crash just made things worse. Ryan forced the issue and caused a crash. Chad was in the wrong spot at the wrong time. That happens every weekend, though.

As for St. Louis, it was basically a powder keg. Chad was ready to take Dungey on and motivated to race him. He jumped out to a good start in the heat and was visually aggressive early. Just how aggressive is always going to be a matter of opinion (just ask me how I view Vince Friese’s racecraft versus how Steve Matthes views it). Chad re-passed Dungey on the first lap and then again a few laps later and this time made contact. It was both intentional and effective. Dungey was moved out of the line and Chad continued on in the lead. Was it dirty? Ehhh, maybe. I could be swayed to either side. It was basically side-to-side contact and I would probably ride the fence if pressed (waffle waffle waffle). I assume both sides vehemently disagreed with each other’s viewpoint on the move and added even more fuel to the fire. Eventually, Dungey would get by and go on to win the heat race. Chad would transfer as well and even though there was some contact and understandably raised eyebrows, things weren’t too far from the norm. Racing hard for the lead is always going to get some extra leeway, no one crashed, and the pecking order found its rightful place.

The final straw for Reed in this whole scenario was when Ryan let his own frustration get the best of him. Ryan made a comment about Chad not being mature and, I am assuming here, I doubt that sat well with the oldest rider in the field who also happens to be a two-time champ. Ryan was frustrated with the contact and I can understand his thought process, too. He is embroiled in a dogfight with Eli Tomac and simply has no time or energy to worry about Chad.

The trouble there is that the other 20 riders in the main events don’t really care about Eli or Ryan’s championship battle. Chad’s thought process doesn’t include Ryan and Eli’s personal struggles. Chad has his own season and career to worry about, as well as trying to put his Yamaha on the top step in that very heat race. The same could be said about the whispered criticism I heard for Davi Millsaps fighting so hard to beat Dungey in Detroit. A few voices were upset that a fellow KTM rider would make it difficult for Ryan to move forward. Unfortunately for those voices, Davi needs a factory level ride again in 2018 and a podium finish means a bit more to him than helping Ryan Dungey. That perspective is going to change from semi-truck to family members, fans, and team managers. These riders are out to do the best they can for themselves, their sponsors, and their teams. Whatever Eli and Ryan have going on at the front of the points heap is between them.

As to the “mature” comment, Ryan is a man and spoke what he felt. He is under a ton of pressure right now as his points lead has evaporated in recent weeks. I can’t even imagine how stressed out he is and the last thing he needs is drama with Chad. The only real opinion I have on it is not so much about whether Chad’s move was immature, but that it may not have been the wisest choice to fuel the fire.

A relevant story here was told to me once by multi-time Arenacross champion Josh Demuth. Arenacross is basically a war zone. Everyone smashes into everyone on a weekly basis and it ends up being a war of attrition more than straight-forward racing like supercross. In a casual conversation, I asked Josh how he avoided all of the carnage that was so prevalent for all of his fiercest rivals. His answer was so simple yet genius. He explained that he never, ever gave anyone a reason to retaliate on him or cause undue trouble. He only passed cleanly, treated the other racers like gold, and greeted everyone with a smile no matter what the outcome of a race.

In a nutshell, everyone he raced against liked him. He didn’t create enemies that could cost him dearly in a championship scenario. No one took cheap shots and no one entered main events with a vendetta. That exact point is the singular and only misstep Ryan made in this whole process. Not Detroit’s main event start (I think that was just racing), just the comment. Regardless of how mad he was after that heat race, voicing it on national television could only make the situation worse. Chad was already looking for a run-in and that comment surely pushed things to a breaking point. Chad had nothing to lose and for Ryan, that’s a terrible scenario to have looming.

It’s irrelevant to me whether or not Chad was right or wrong (I do think he was in the wrong in the main event). I would probably lean toward an overreaction from the Detroit crash if anything. I do know this, though, Chad didn’t take that comment lightly and somehow, some way, would repay the favor. That’s just his nature, even if it’s to his own detriment. Unfortunately for Ryan, his team, and fans looking for a battle, Chad decided to make life hard for Ryan on lap 16.

As a former rider who has been lapped my fair share of times the blue flag is a real nuisance. To be quite honest, I could have cared less about the guys coming to lap me. I was in my own race and trying to beat the riders directly around me. The leaders are racing and the guys in 12th are racing. The last thing anyone wants to do is stop your own race to move over for someone else whether they are in first or 20th. Having said that, I knew that I didn’t want to be the guy everyone was screaming at after the race for not moving out of the way. I moved simply to avoid the fall-out, not because I cared about the leaders. Sometimes, the leaders simply blew past regardless of what I was doing. Other times, I had to consciously get out of the race line so they could use it and continue on. No matter what, though, I knew whether or not I was making it hard on the leader or if I wasn’t. Chad knew, too. There is no doubt in my mind that he was making things hard for Ryan. Chad might disagree but in his heart of hearts, he knows. Lappers have gotten in the way of the leaders since the beginning of supercross existence, though. Sometimes on purpose, sometimes out of sheer obliviousness. This was the former. Chad had an axe to grind and used an effective tool to make his point.

The only advice I have to give is that there is no upside for either party in continuing on with the madness. Chad needs to put in good results and smashing Ryan’s KTM won’t help accomplish that. For Ryan, the last thing he needs is an angry Yamaha looking for an angle to upset his apple cart. Josh Demuth’s tale may be the wisest course of action moving forward. As angry as Ryan surely is, there is nothing to be gained from retaliation. His attention needs to rest entirely on stopping the green #3, not the blue #22. In the spirit of his immature themed accelerant, maturity may be the difference in keeping or losing that #1 plate.