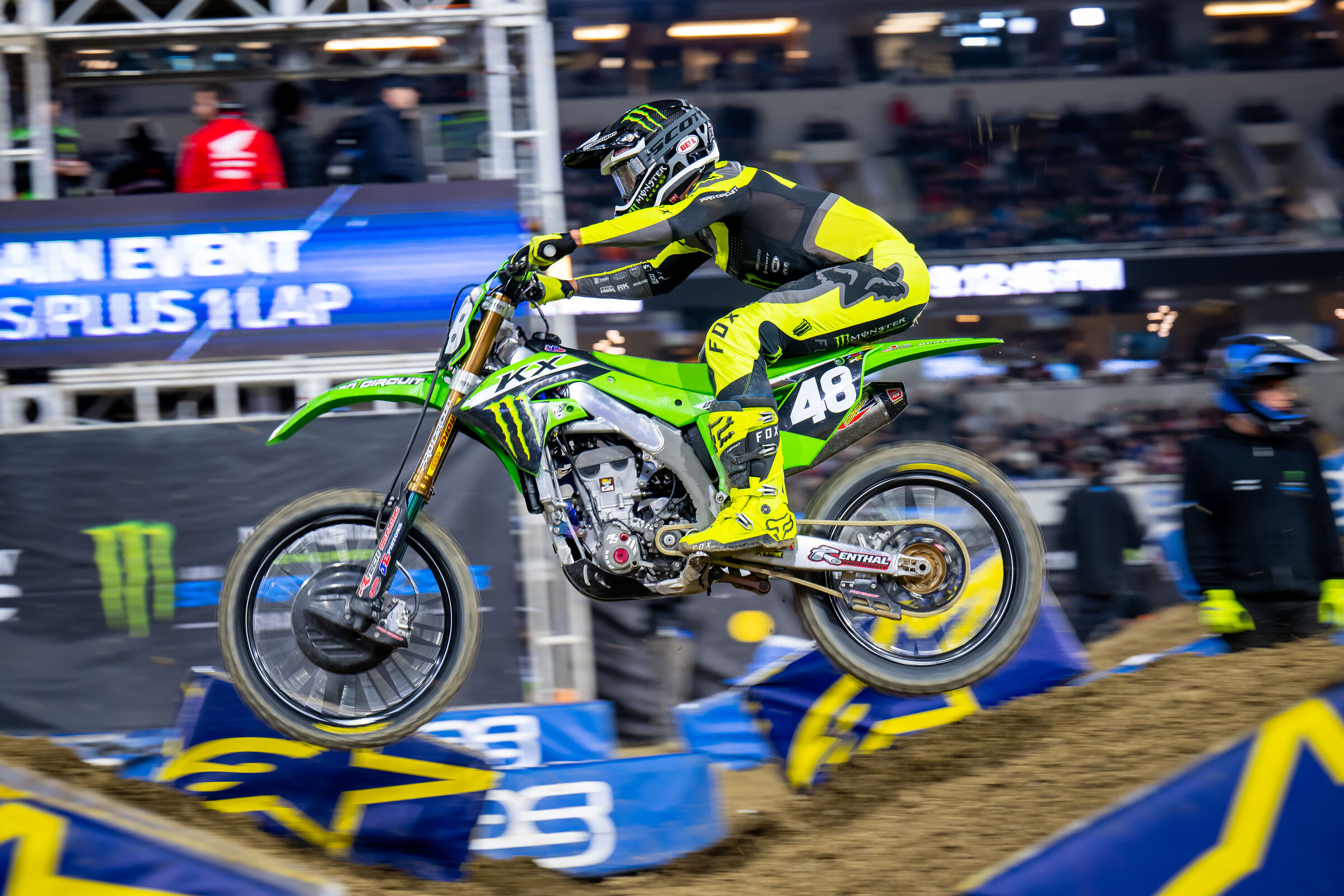 For the second race in a row to start the 250SX West season, Rockstar Energy Husqvarna’s RJ Hampshire caught and passed Monster Energy/Pro Circuit Kawasaki’s Cameron McAdoo for second place late in the main event. This San Diego race looked very similar to Anaheim 1 as both riders battled just a few seconds back of Jett Lawrence who had slowly pulled away with the lead before continuing on to win the main event. Afterwards at Anaheim 1, McAdoo revealed he got arm pump as a result of a close call causing him to strain his arms and apparently the same thing happened again in San Diego.

This left Hampshire with another great runner-up finish, although this one wasn’t as easy as Anaheim, because he’d suffered a big crash leading up to the race. After the dust settled and the same podium finishers ended up at the post-race press conference again, Hampshire and McAdoo talked about their nights and that interesting late race dynamic.

RJ, you had a big gap to Cameron, but you set back-to-back fastest laps of the race on lap 13 and 14. What were you doing to make up such a big deficit and how were you staying focused?
RJ Hampshire: The beginning laps weren’t that great for me. Once I got into third, Cam actually pulled me a little bit. I had a rough week. I was honestly like, okay, third is what I’ve got tonight. Then I just started clicking them off and I started hitting that outside after the long rhythm and was able to kind of push through 2-3-2 and was making up time. I saw the gap kind of closing up a little bit. He ran into a couple lappers and had a couple mistakes, and I was able to click them off. I haven’t been able to do that much, so to have back-to-back races where I kind of can close the deal late in those motos is huge for myself and our whole program.

RJ, why did you have a long week?
Man, I smacked my head hard on Thursday, I believe it was. We went to Hemet. Honestly, I deserved it, because we didn’t want to be there, and I just had that bad attitude. Just a stupid mistake in the whoops and had a good one. Smacked my head. Did not feel good. Went to see G Thursday or Friday. I didn’t really know necessarily how I was going to feel tonight. Woke up this morning with a sore throat again, just to add to it. One of my tougher weeks but did not show there in that main event. I was pretty stoked that I turned it around.

Was this Thursday/Friday this week or before what would have been Oakland?
This was this week. It was either Wednesday or Thursday. It was Wednesday. Wednesday, I smacked my head pretty good. We rode Tuesday up in the high desert, found the track Wednesday to ride. Deserved it. It kind of humbled me a little bit again. This week I won’t be jacking around. I’ll have a good attitude and go do my laps and hopefully we can stay off the ground.

In the heat race, it was red flagged while you were leading. How did the red flag affect you and the delay? Did it give you a couple minutes to have a drink of water or whatever? I don’t understand the rules, because I would have assumed you would have had the first position. Can you talk about that?
Yeah, I don’t understand what happened and how I got moved back to second, but then the same time stayed on. They said they were going back to what we finished the second lap on when the guy crashed, but I don’t get that because then we did a whole other lap plus the next lap was the red flag. So, they moved it back to second but left the same time on the clock. Which, I came around the first lap and when I hit the finish, I looked up and there was only a minute and twenty seconds left or whatever, which I don’t know the ruling on that. I don’t know if that was correct or what the deal was.

In the past, you’ve had a little bit of a reputation for a guy that could have podium speed or crash. We talked about that, and you said you need to work on that. So far this year, it seems like you have kind of figured that out. Has there been something specific that you worked on to overcome that?
To be honest with you, it’s a lot to do with my confidence in what I’m racing on. You’re going to try to ride a bike harder that should not be rode that hard or try to get to that speed. Last year we didn’t have that bike that we could go out there and do that. Maybe in the years past, I haven’t been confident in that. I made it pretty vocal even coming into this year that these guys, they did a lot for me. I’m just stoked that it’s actually showing on the weekend. I put my balls out there quite a bit, so just to back it up two weekends in a row is huge for myself and huge for this whole Austrian brand.

What have you figured out with the bike? What have you changed that has made those improvements? Chassis stuff, suspension, all of the above?
Man, it’s so much. It’s the same with Coop. You can tell with him. He’s a different rider also, and Malcolm. I don't think we’ve had this strong of a team in a while. Today was looking awesome for both of us. Engine, we did a full-on rebuild on that. We also have more stuff coming for outdoors, which I’m pretty stoked on. Bringing Hansen over was huge also. We got a really good base. They kind of stopped telling me exactly all what they had, just because I want to know about everything. I’ll know what Coop’s on, or what whoever else is on my bike is on. That’s just how I am. I want to know how that works or what’s better with that than mine and what I feel. I ride the bike super different than my teammate or anyone else on that 250. There’s still some things that can be better. My starts for sure are one of them. That main event start, I can’t keep doing that and come from the back like that. I talked to Tony already, our crew chief, and we’re going to go to work this week and try to figure this out. Hopefully we can battle with Jett and Cam a bit more.

You’ve only raced the west once, so take it one step further. Just being back on the west in general and racing baseball stadium at Anaheim, Oakland coming, and then being in San Diego, open roofs, this is different for you.
Yeah, for sure. Honestly, I’ve been kind of someone that hates being out here and spending time out in California. All we did was change where I’m staying at now. I spent the whole month out here with my family. We’re honestly enjoying it. We enjoy where we’re at right now, and I think that kind of leads into the weekend. Coming down here, I even got to stay at my Airbnb last night again, which was huge just to have that little bit more comfort than staying at a hotel. I think the track was really well, and for how much rain this place has taken the last few weeks, the track crew did an awesome job. The stadium was sweet. I think it was cool for the fans. Our whole pit setup out there was much better I feel like here than Petco. Hopefully we can come back.

All three of you guys are representing brands that are very proud of you guys to be up on the podium after the night. What’s going through your mind as well?
I appreciate it. We have respect for all the guys out there, no doubt. Cam and I both have a lot of respect for each other for I think multiple reasons, and we’ve been through a lot. We’re late in our career now. We’ve seen a lot. We’ve been teammates before. We’re going to race each other hard, but you’re not going to expect anything crazy, and I don’t expect anything crazy from him also. I feel like both weekends, we raced hard but it was clean. Same with Jett. He’s new to it, and I don't think he’s been through as much as us, and he’s good. That’s all you can say. He’s talented and he’s been able to knock it off. It’s cool to be up here with Cam and be battling for podiums every weekend. I don’t think either of us have been this close to the lead two weekends in a row. Hopefully we can stay in it and hopefully have some good battles.

Cameron, a couple weeks in a row where RJ passed you late. I’m sure it’s disappointing. What do you need to work on? Is it bike setup?
Cameron McAdoo: I don’t think I’m looking for setup. I got into some lappers, and I didn’t navigate them so well, so that cost me some time. Then I made a few big mistakes that cost me in the rhythms, and he was up on my back wheel. Yeah, just eliminating those little moments that end up being big for me. It was frustrating to lose that with a lap and a half to go. He’s riding really well and so is Jett, so I just need to be better.

Talk about how at one point in your career where getting up on the podium was huge, and now it’s expected. Talk about that transition. Now it becomes frustrating if you don’t win.
It’s all perspective to me. Yeah, at one time it was a dream to get up here, but once you work for it and you get it a few times, then the expectation becomes winning. Then once you win a few times, third isn’t where you expectation is. Especially getting passed late in the race, that’s a tough one for me. It’s pretty hard to accept, so like I said, I’ve just got to get better.

You mentioned that you tightened up at Anaheim. You were laying down some of the fastest laps tonight and then the same thing happened. Did you tighten up again?
Yeah with three laps to go, similar thing as Anaheim, I made a pretty big mistake and I got arm pump, if I’m honest. Arm pump is pretty foreign to me, it’s not something I usually struggle with. That’s on me, I made a mistake and that’s where it’s coming from. I just need to execute better and hit every mark every time.

Is it creeping into your head now? Now that’s it’s happened two races in a row.
No not really, because I know what’s causing it. I know what happened. Tonight I clipped the top of a tabletop, and it sent me forward. It was a big moment. It’s very obvious when it happens, it’s not like I’m getting pumped up all day and dealing with it. I just need to eliminate those mistakes.

What are you going to do during the week?
When it doesn’t go how you’d like it to go, it’s easy to get frustrated. We’re going to go back to the shop, we’re gonna watch the race on Monday, we’re gonna ride this week just like the rest of these guys. I’m not going to be down on myself.