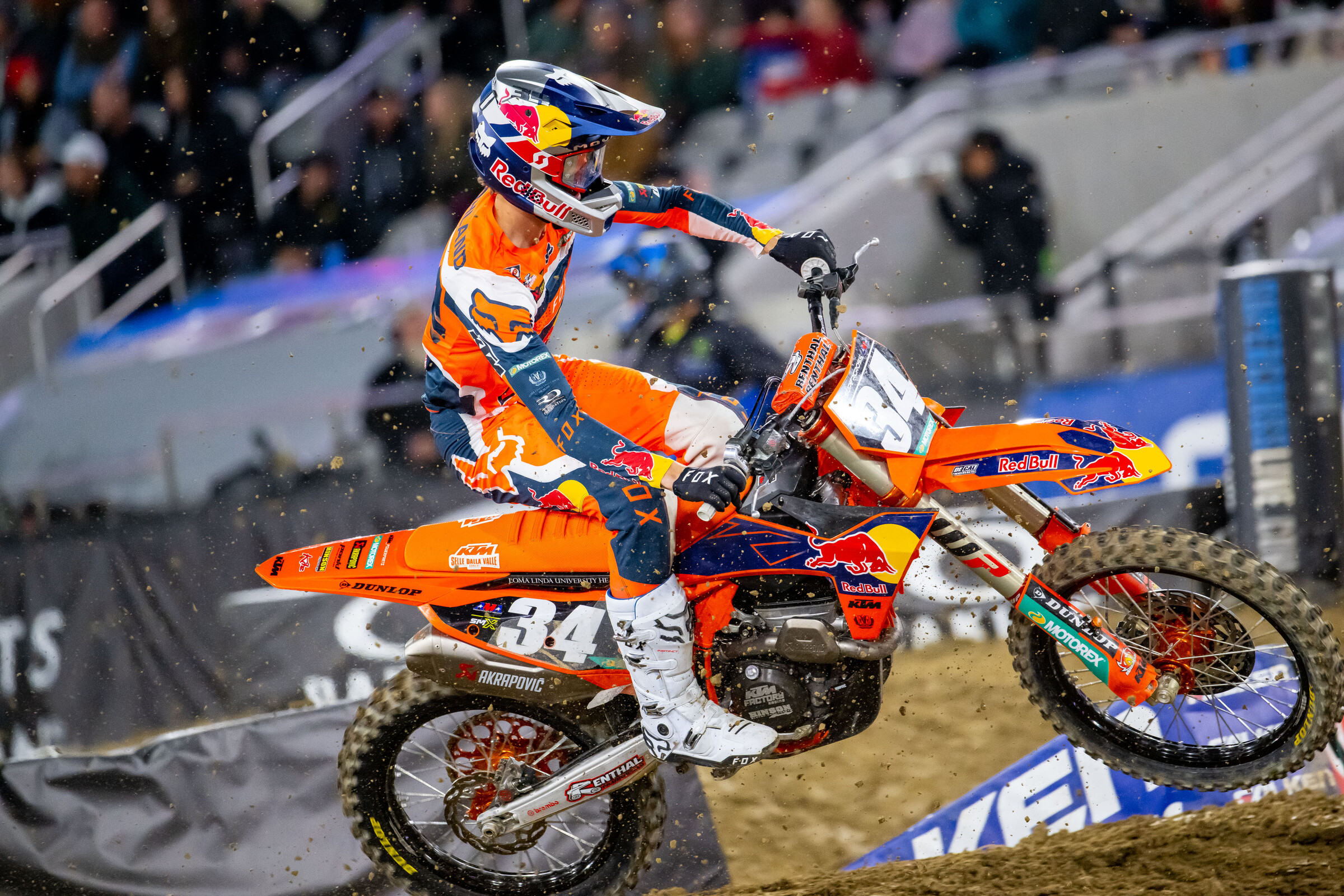 The San Diego Supercross over the weekend, better known as round two of Monster Energy AMA Supercross, saw a rather peculiar sight. Even for early in the season, it was odd to see factory riders in both the 250SX and 450SX Last Chance Qualifiers. Red Bull KTM’s Max Vohland found himself in the 250SX LCQ while Honda HRC’s Chase Sexton and Twisted Tea/Progressive Insurance Suzuki’s Shane McElrath both ended up in the 450SX LCQ. Sexton and McElrath converted on their end, finishing in first and third, respectively, to qualify for the 450SX main event where the points are actually paid for the championship. Vohland, however, did not convert and it’s become a bit of a talking point for the 19-year-old out of Granite Bay, California.

It all started in the heat race for Vohland when he was pinched off the start and came into the first turn nearly in last before clipping someone’s rear tire and almost going down which did put him last. Vohland was able to make it all the way up to sixth before the red flag was displayed as Colby Copp had crashed at the end of the whoops heavily. That led to a staggered restart of the heat race and it also reverted the running order back several laps which put Vohland a little further back when the green flag waved. Unfortunately, the same thing happened again as a small stack up in the first turn caused Vohland to actually go over the bars and remount in dead last again. With only a handful of laps remaining after the restart, Vohland could only make it back to 13th which put him in the LCQ.

The LCQ didn’t exactly go to plan from the start for Vohland who tangled some bars coming into the first turn again and got shuffled towards the back of the pack. He was able to come across the line on the first lap in 11th. He then moved up to ninth on lap two, seventh on lap three, fifth on lap four, and finally into the fourth and final transfer spot on lap five. He had just made the pass into third on the sixth lap when he got sideways in the long rhythm lane, and when he landed on the tabletop, he hooked left and jumped off the track, clipping an Alpinestars medic as he went down. Fortunately the medic and Vohland were both okay as they stood right back up, but Vohland was outside of the top 10 at that point and could only get back to eighth by the checkered flag as he missed qualifying for the main event.

“In the first heat race I had a very bad start, made my way up to sixth, and then the red flag came out,” explained Vohland. “On the restart I crashed in the first turn and, with only two laps to go, I was outside of the top nine and had to go to the LCQ. In the last chance, I worked my way up to a qualifying position, but then made a mistake on the last lap and went down, unfortunately putting me out of the main. Of course, I’m very disappointed, but I’m healthy and will be back at A2."

Factory riders have missed plenty of main events over the history of supercross. It happens. Unfortunately for Vohland, this is not the first time. In an odd set of circumstances when Vohland came back from a shoulder injury last year, he happened to return to racing at the Triple Crown in St. Louis and then the next weekend was the East/West Showdown in Atlanta. Only the top 18 riders qualify on time right into the Triple Crown and the final four spots are filled by an LCQ while only the top 20 straight up fastest qualifiers make it into the East/West Showdown from each coast.

At St. Louis, Vohland was still nursing the injury and wasn’t back to full strength but went out and qualified 21st on the day. He then crashed on the first lap of the LCQ and came from 20th to end up 11th and missed the main event. Then at Atlanta, rain drastically changed the schedule for qualifying which saw only one session run for East, West, and overflow to determine who made the night show. Vohland ended up in overflow (due to missing the main the week before) which means he got a completely soaked track that was not worn in and he ended up third in the group. Then the A group went out on a track that had been worn in by overflow and 18 riders ran faster laps which left Vohland 21st and out of the night show by two tenths of a second.

It's certainly not a great trend but at least last year the two missed mains could be explained. KTM even shut it down for Vohland in supercross after Atlanta as it was determined he was not healthy enough to ride at his potential. When he came back to racing for Pro Motocross just a couple months later, he was great and ran up front often, eventually finishing sixth in points.

San Diego might be the worst one thus far, but it can easily be explained by a series of odd events. In the end, the blame for missing the main does fall on Vohland and his body language leaving the track on Saturday night suggested utter disgust in himself. But the talent is certainly there, and few would even realize that San Diego was just the eighth supercross race Vohland has ever attempted.

Back in 2021, he was thrust into the professional ranks thanks to KTM Groups purchase of GasGas. In shuffling around programs, the Troy Lee Designs/Red Bull KTM team became Troy Lee Designs/Red Bull/GasGas and they signed Justin Barcia. That took a whole 250 factory level program away from KTM motorcycles and they decided to start their own program under Red Bull KTM Factory Racing. Instead of hiring a free agent veteran, they chose to take Vohland right out of the Schoolboy class and give him a three-year deal with the team.

Year one was 2021 and right into Monster Energy AMA Supercross Vohland went. He did just fine through the first three rounds going 9-8-6 but then he dislocated his hip at Indianapolis and missed the rest of supercross. Then in year two, he crashed in the first turn of the first main event of the year which left him with a massive hematoma in his shoulder and a couple of small cracks in his collarbone. That set in motion everything that then happened at St. Louis and Atlanta about a month later.

Now in 2023, in what was supposed to be year three, Vohland finished a comfortable fifth at Anaheim and then had a strange night in San Diego. If all of those things had happened during his rookie year, it would look weird but make sense. Because it’s happening in his third year as a professional, it’s left many to begin calling for his ride. But again, nobody seems to remember he’s raced only eight supercross events ever and only started five main events. San Diego was an unfortunately large speed bump, but Vohland has the talent, and it might not be long before we forget any of this ever happened.