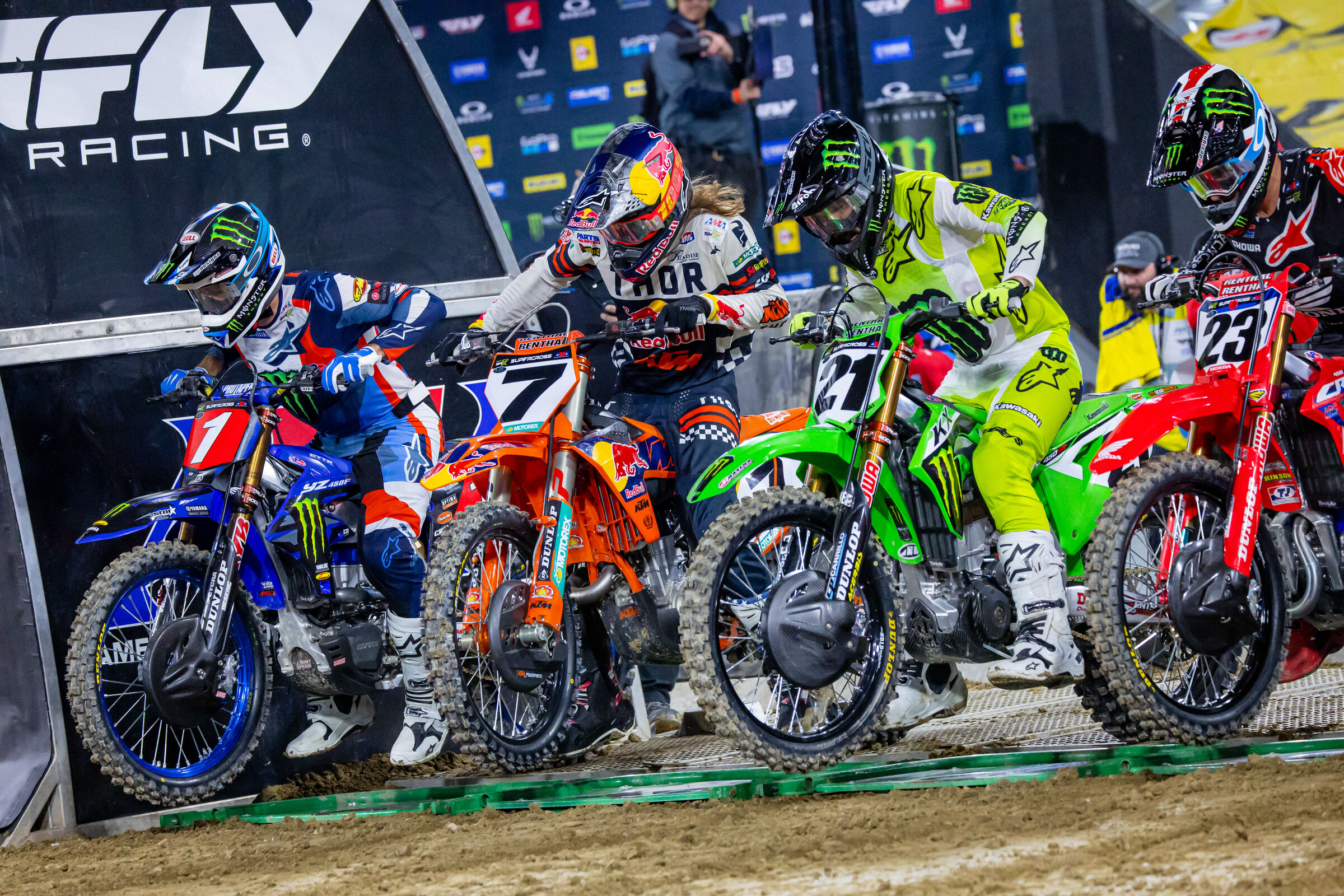 The gates have dropped, and the 2023 Monster Energy AMA Supercross Championship is in full swing! With lots of storylines coming from the San Diego Supercross over the weekend, we fired off several questions to former long-time pro racer Jason Thomas.

It was the first time racing in Snapdragon Stadium. What’d you think of the venue?
I loved it! I think there are pros and cons to both Snapdragon and Petco Park, but overall, the hope was that it was going to be a great experience. I think we can confidently say we achieved that. Having a new stadium with modern amenities with convenient parking and the ability to tailgate all made for a great Saturday. The pits were very near the stadium, which may not seem like a big deal, but for those of us who go back and forth several times, believe me, it matters. Fans can visit the Fan Fest area multiple times without needing a watering station in between. Overall, I grade it a solid “A.” Is it Arlington? No, but it’s miles better than Qualcomm was.

Anyone with half a set of eyeballs can see how good Jett Lawrence is. But what about weaknesses? Was there anything you saw in San Diego from him that his competition might be able to exploit?
He might have a few but I don’t think we will get to see them exploited until he’s racing against the 450 guys. He is simply too good for most of the 250 riders. I do think he can be challenged here and there by RJ Hampshire, Cameron McAdoo, etc., but over time, he will just wear them down with excellence and consistency. The real question will come when he has to race others who are just as good as he is. Can he maintain poise and be willing to accept a fifth on a random night on the 450? Time will tell, but as for weaknesses, we simply don’t know yet.

After being so good at A1, Max Vohland failed to qualify for the main in San Diego. From what you saw, was it just one of those weird races where crazy things happen, or does Vohland need to think about getting the panic button out of the drawer?
It was one of those weird nights, but, he is having too many of them. He has missed far too many main events recently. I don’t think it’s a riding problem, as he is plenty fast enough to qualify and even overcome adversity to do so. He seems to be putting himself into harm’s way too often, though, and that will cost you in the long run. Qualifying is often about just being situationally smart and avoiding unnecessary trouble. I’m sure he’s feeling pretty low after a tough Saturday but redemption is only five days away.

We saw some aggression early out of Levi Kitchen in his heat race. Are you a fan of him getting after it like that, or did you think he might have been forcing it a bit much?
There’s a balance that needs to be respected. I think he was needing to show some flash, though. His opening round was less than inspiring, and many have high hopes for The Chef. It was a bummer to see him go down in the first turn of the main event. This class needs more variety at the front.

Enzo Lopes was good in San Diego. What’d you think of his night, and what does he need to work on to get on the box?
He was good at A1 also! I think this is just who Lopes is in 2023. He needs to continue to put himself in positive situations and let things unfold. If you keep finding yourself in the top three on the first lap, eventually things are going to go your way. In the meantime, just keep putting together strong finishes and stacking momentum.

Justin Barcia struck again in San Diego, taking out Chase Sexton. What was your opinion of the move, and how likely/unlikely are we to see Sexton do anything about it in the future?
I have been told that Barcia is trying to avoid trouble in 2023. I chuckled when I heard that because I just don’t think it’s in his DNA. The trouble with Barcia is that he’s a really nice guy off the track but an absolute nightmare on it. No one is ever going to give him the benefit of the doubt because of his prior actions.

Eli Tomac has gotten lots of attention so far this season, and for good reason. But Cooper Webb has been sneaky good and even got pretty close to Tomac at the end. What parts of the track did you think Webb was navigating better?
He just looks much more like himself, or at least the 2019 and 2021 version. I think he and his teammates really struggled with the new KTM last season. There was a lot of frustration behind the scenes and they made sweeping changes to right the ship. He looks like he can corner much more effectively with this updated setting and he was respectable in the whoops, too. The real question will be when we face big, nasty whoops that require blitzing at speed. If he shows prowess in that environment, anything is possible.

Adam Cianciarulo was back in San Diego! For a few laps anyway. Clearly the speed is still there. What’d you like, and what’d you dislike, about his ride on Saturday night?
Listen, I just want to see Adam at 31 races this year. I don’t care where he finishes. I love that he’s leading laps and finishing inside the top ten. That’s great! But honestly, I don’t care what the result is. Just do all of the laps and finish every race. If he does that, success will follow. He is simply too good to not do well if he can accomplish the prerequisite of doing every lap.

The Triple Crown is this weekend. Based on what we’ve seen at the first two rounds, who do you think will benefit from the shorter races?
For the 250’s, I think it presents an opportunity to fluster Jett. Remember how bad of a night he had in Arlington last year? The shorter races usually lead to more variance, as a start is so much more valuable. If I’m RJ or Cam, I do everything possible to get the holeshot and then go at Jett with everything I’ve got.

In the 450’s, I think guys like Malcolm can get themselves a win. The longer the race is, the more things revert to the mean—the best guys will find themselves at the front if you give them enough time. A shorter race means that some of these guys can absolutely empty the gas tank and make it to the checkers. Malcolm can sprint with the best of them and could be the spoiler.