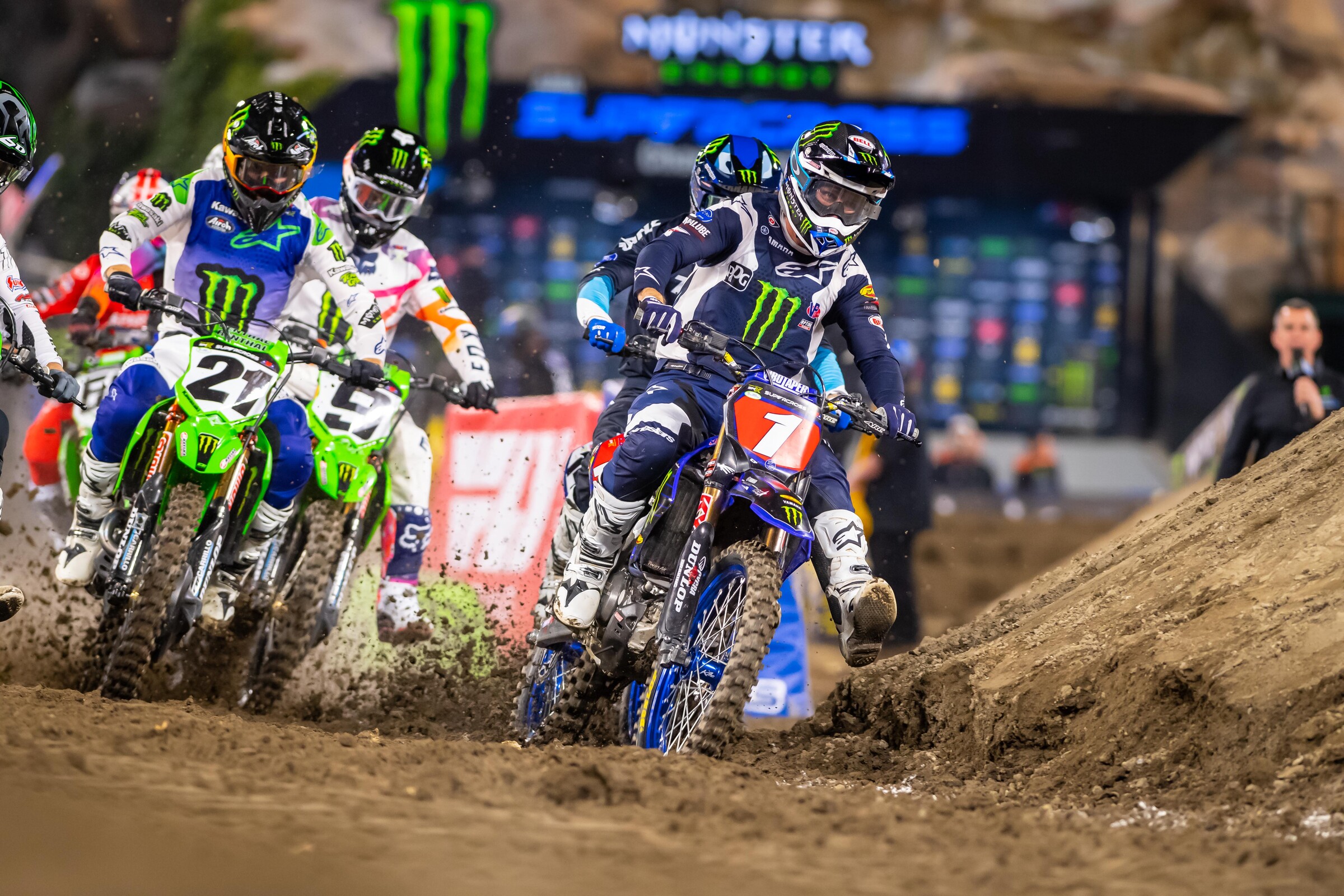 San Diego is one of the nicest cities this country has to offer. Mild weather year-round, beautiful beaches, and round three (or is it two?) of Monster Energy AMA Supercross are all feathers in San Diego’s cap. For 2023, the series moves to the brand-new Snapdragon Stadium. Many will remember this location as the former home of the San Diego Chargers in what was then called Qualcomm Stadium. The geographic location is the same but the new stadium itself should be a nice upgrade. I’m a bit torn on the move away from Petco Park as the downtown location had a lot to offer. However, pits, parking and FanFest convenience were not included in those so let’s see what upside Snapdragon has to offer.

The San Diego track is back to the football field layout after the Petco Park departure. That means long straightaways and big rhythm sections versus the back-and-forth tightness that baseball diamonds often bring. The start is also a benefactor here, using 80 percent or so of the stadium length before bending into a 180 left. A multi-option rhythm section greets riders immediately and brings some risk. These immediate rhythm sections have been controversial at times with riders so bunched up. One unwise decision can have devastating consequences but let’s try to stay optimistic, shall we?

A 180-right hand-turn sets riders up for a stadium-long rhythm section. There are plenty of opportunities to triple here but ruts could make things more difficult than they look on paper. The ideal approach would be 3-3-4-2 (or step-on step-off instead of 4). That’s a big ask and would only be for the elite on a perfect race track. Watch for this section to be very important, a la the third base line rhythm section at Anaheim 1.

A 90 to the right leads into another rhythm with a few oddly built jumps. Riders will want to stick to the inside in the 90 and then decide whether to roll the first single or to seat bounce double out of the tricky 90. That will dictate their rhythm through the rest of the section. On paper, the best approach looks to be 2-3-2 but that will all depend on the soil composition and angles of the jump faces.

A tight 180 right (netted) fires riders into the only standard supercross triple of the course and immediately back into another 180. A short chute cuts across the would-be first corner and into a dragon’s back (what would Snapdragon Stadium be without a dragon’s back, right?).

A tight 90 sets riders up for a small double and a long whoops section alongside the stadium wall. San Diego is notorious for tough whoops so watch for these to play a critical role in the results. A 180 sends riders over the finish line for the first time, followed by a small double and yet another 180 to the left.

A should-be-basic triple is up next and then a unique, long 180 is set up on the start straightaway itself. This will be a flat corner that riders will stick to the inside through as well as passing by the mechanics’ area. A similar triple meets the end of this uncommon section and back into a 180 for lap two.

Overall, this track will test riders with the multiple rhythm sections, dragon’s back, and long whoops. There are a multitude of 180 corners so we should see lots of block pass attempts, too. This track seems to offer a bit of everything and I give it two thumbs up.

Eli. Tomac. What a statement ride from the defending champ. If anyone was wondering where his motivation was after such a stellar 2022, wonder no more.

Cooper Webb needed a ride like he had at Anaheim. He is one of the most headstrong riders in the sport, but everyone needs some validation now and again.

Colt Nichols hasn’t raced in a full year, let alone on a 450. He put in consistent laps, stayed out of trouble, and found himself in sixth when the checkers flew.

Okay, okay, I know Mookie got 16th but he was still riding incredibly well. If that’s his level each weekend, he’s going to get a win.

Jettson Lawrence put a tough A1 afternoon out of his mind and went on to win the main event. Turns out, he’s pretty good on a dirt bike.

RJ Hampshire was a solid, consistent podium guy all night. I knew he would be fast, but he had less sketchiness in his riding. New year, new RJ?

Marvin Musquin looked solid in the afternoon, but the main event just didn’t come together for him.

Austin Forkner was my pick to win the main event after a stellar qualifying program. That was not meant to be. Poor guy cannot catch a break and will now miss the remainder of Monster Energy AMA Supercross.

Shane McElrath had a tough opener on his new Twisted Tea/HEP Motorsports Suzuki. He has had to wait a full two weeks for redemption, but Saturday is a chance to reset.

Union Pacific joins the series as a major sponsor as several privateers turn to train travel to handle the Oakland rescheduling.

Several NBC executives mumble curse words at my smirking face while I relentlessly reference the dragon’s back at Snapdragon Stadium.

Cade Clason had a rough weekend at the AMA Arenacross Championship round in Arizona but somehow avoided baseless claims of wearing his sister’s jeans.