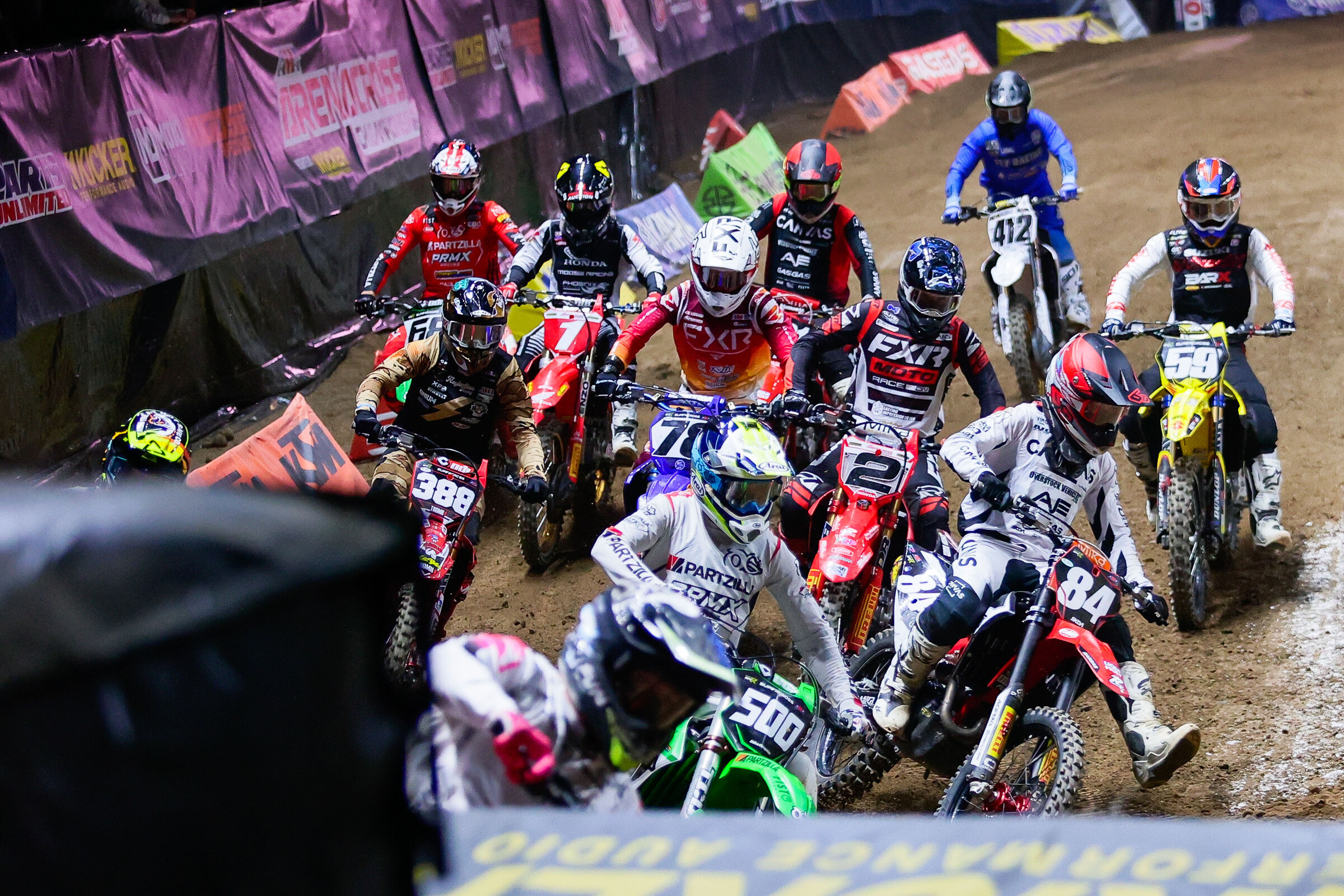 Unless you live under a rock, you already know that round two of Monster Energy AMA Supercross was postponed in Oakland due to weather. This was obviously sad for supercross fans, but it also led to several SX regulars driving to Arizona to take part in some AMA Arenacross Championship action. Along with causing the purse to double, it also doubled the competition and made for some VERY close racing all night long. The only downside was that it also left a few AX regulars sitting on the sidelines when they didn’t qualify, most notably, points contender Izaih Clark. It truly hurt not to see him in the gate for the main, but he should be able to shrug this off and come back swinging at the next one.

Shots were fired early in the “SX vs AX” battle when SX regular Cade Clason ripped off the fastest time in timed qualifying. The stage was set for some intense battles as the AX regulars weren’t about to let the “opposition” steal all of the glory—and prizes.

Cade Clason got the holeshot, closely followed by Izaih Clark and Austin Politelli. Clason went down on lap three, handing the lead to Clark, but Clark’s lead was short lived as he had a minor bobble two laps later that put him back to third. Politelli cruised to an easy win, with Devin Harriman taking the second transfer spot. [Editor’s note: Gared “Stank Dog” Steinke went down in the second turn of the heat and retaliated while being lapped, sending Clason over the berm. Steinke was later disqualified for the night after an altercation with Clason off the track afterward. Watch the retaliation below].

Matthew Curler and Brandon Ray jumped out front early. Dominique Thury had a great charge through the whoops on lap three, passing Curler for second. Mitchell Harrison had an okay start but looked to be the fastest racer out there as he moved up through the field. On lap six, Harrison ran off the track trying to pass in the whoops and found himself head on with the leader, Ray! Neither rider went down, but their heart rates certainly spiked! Harrison ran out of laps, ending up third and having to take a trip to the semis. Ray led nearly every lap for the win, and Thury finished second.

Kyle Peters made it look easy with his trademark holeshot and checked out for a convincing win. Behind him, Jerry Robin looked to have the second transfer spot under control until a problem in the whoops on lap four dropped him to fourth. Julien Benek capitalized on the error and held down the second spot all the way to the finish.

Kyle Bitterman got spun around in a little turn-one chaos, but executed some excellent damage control and was able to come out relatively unscathed in sixth. Grant Harlan had the holeshot on his 450 and took off at the front. Bitterman wasted no time and immediately started picking off riders, taking over third place on lap three. Also, on lap three, Robbie Wageman caught Harlan, but went down trying to pass going into the whoops, dropping him to fourth. The last three laps were quite intense, as Robbie Wageman was catching Bitterman and Bitterman was catching Harlan. A tiny bobble by Bitterman on the last lap gave Harlan the slightest bit of breathing room while Robbie Wageman waged war on Bitterman in the last turn. Robbie Wageman passed going in, but Bitterman showed his experience, squared it off got the better drive out, securing the second transfer spot. By far, the most exciting of the four heat races!

Matthew Curler took the holeshot, followed by Geran Stapleton and Preston Taylor. Taylor took over first when the front two came together in the whoops, with both of them going down. Harrison was the fastest guy on the track but had a gap to overcome. Harrison made his move in the whoops on lap seven and claimed the only transfer.

Jared Lesher showed everyone how to do it in style on his retro bodywork clad YZ250 two-stroke, taking the holeshot and leading every single lap. The bigger story was the big hitters who didn't make the transfer. Points contender Izaih Clark, fastest qualifier Cade Clason, and the very quick Robbie Wageman all found themselves having to move on to the LCQ with the grim knowledge that at least one of these very talented riders was not going to make the main.

It was “Wageman vs Wageman” in this fun, thre-lap sprint for cash. You could see the sibling rivalry as these two wasted no time pushing each other very hard. They fought hard, but you could also see a little respect in their moves. They both tried every clean trick they knew to get by each other, but neither resorted to any truly dirty tricks. Younger brother Robbie seemed to have a bit more pace, but older brother RJ was just saving it for the last lap and made two attempts to get by. Robbie was not to be denied though and held off his big brother for the win.

Stapleton had the early lead followed by Clark, but Clason was on fire, picking off Clark on lap two and Stapleton on lap three to cruise to an easy win. Clark pushed hard, but didn’t have the speed in the whoops, leaving the points contender without a spot in the main.

Curler had the holeshot and early lead, but Robbie Wageman was not to be denied. He put the extra laps from his 1v1 race to good use, passed Curler on lap four and took the final transfer of the night to the main.

Kyle Peters took the win in convincing style after chasing down fast starters Grant Harlan, Devin Harriman, and Julian Benek. Lap two saw fireworks as Harlan and Benek came together. Neither rider went down, but the damage was done and both Harriman and Peters went by, with Peters taking over the lead. Once in front, Peters showed everyone that the #1 on his bike is there for a reason, as he was never challenged. Behind Peters, the battle for second was very intense, with Harrison and Harriman giving it everything they had while fast qualifier Clason sat and watched in fourth. Politelli joined the party on lap seven, passing Clason and making it a four-way battle over second place. It all came to a boil on lap 11 when Harriman bobbled in the whoops and collected both Harrison and Politelli. Clason capitalized and slid into second while Politelli had the best damage control and got going again in third. The lead three stayed the same for the remaining laps as Kyle Peters took the win over Clason, Politelli, Harlan, and Robbie Wageman.

Harrison and Harriman had great starts and resumed their battle from the first main while points contenders Peters and Bitterman were mired farther back in ninth and 12th. In the mid-pack, Politelli and Robbie Wageman were both moving towar the front, working their way up from poor starts. After making his way up to sixth, Peters had a miscue that sent him back to 12th, ending his hopes of another win. At the same time, Harrison started opening a gap on Harriman and was starting to look like he might win it. On lap nine, Politelli and Robbie Wageman both came by Harriman, putting them on the podium and Harriman back to fourth. The best battle in the closing laps was Wageman vs Politelli, as Wageman, who had been following Politelli all race, started applying pressure and finally made a pass for second stick on lap 13. At the checkers, it was Harrison, Robbie Wageman, and Politelli. Bitterman managed to claw his way to sixth and main event one winner Peters overcame diversity to finish eighth. Politelli’s 3-3 gave him the overall win over Robbie Wageman’s 5-2 and Peters’ 1-8.

AX Pro Championship Standings After Round 4

Kudos to the entire AMA Arenacross Championship crew and all of the racers for putting on an AMAZING show!! The added competition from the SX racers made for even more excitement than usual. Tough break for a few of the Arenacross regulars that ended up losing points but that’s part of racing too. See y’all next week in Oklahoma!

If you want to support your favorite riders in the AMA Arenacross Championship, check out the video below.