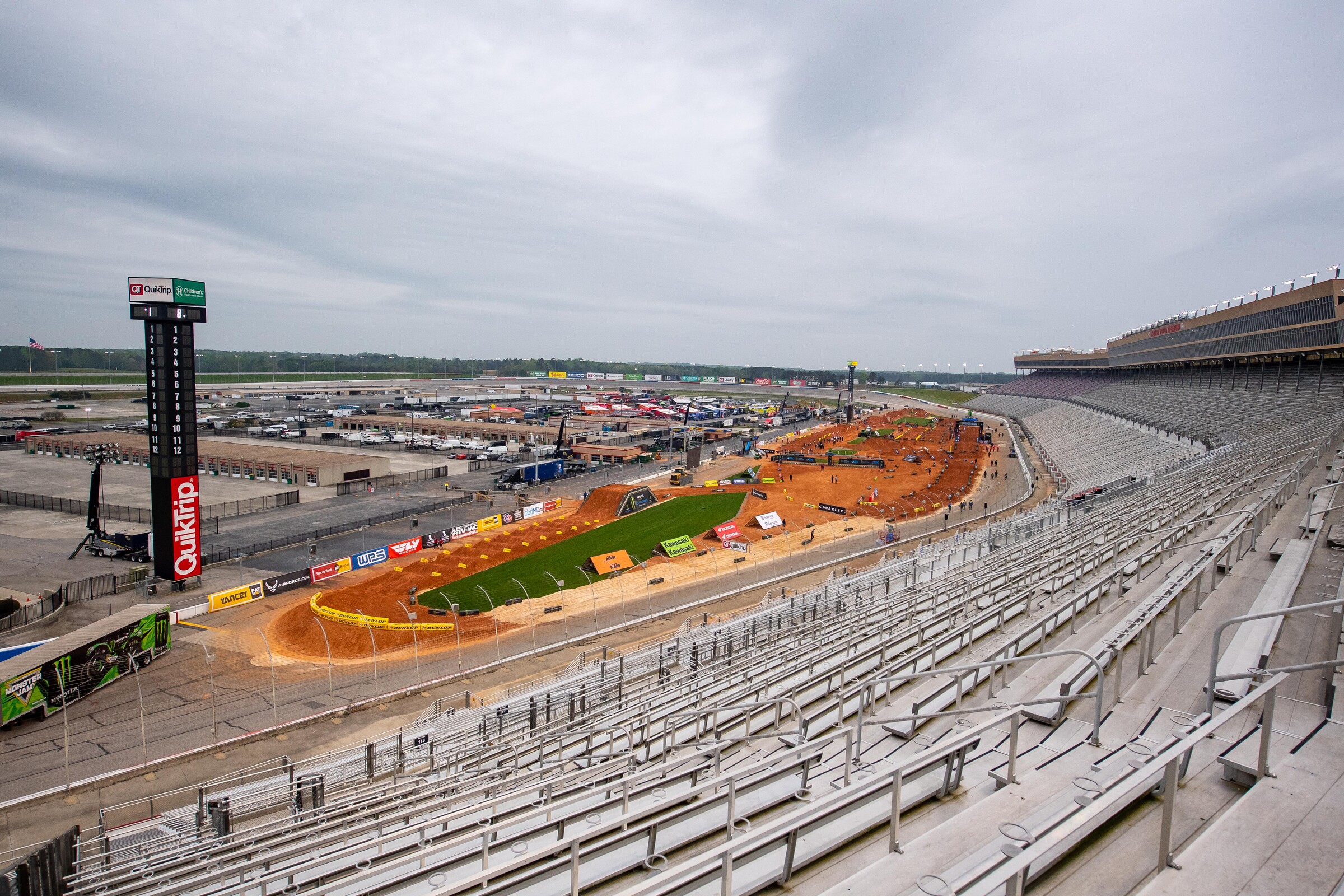 This weekend in San Diego, California, Monster Energy AMA Supercross will race at Snapdragon Stadium for the first time. In doing so, it will be the 11th different new venue the series has visited in the last decade. That got us thinking back at the other newest venues that supercross has been brought inside of in recent times, so today we look back at some of them.

Note that not all of these stadiums or venues are necessarily brand-new facilities, but rather that Monster Energy AMA Supercross had not raced at some of these places until very recently. Also note that the SuperMotocross World Championship (SMX) will also visit zMAX Dragway in Concord, North Carolina, and Chicagoland Speedway in Joliet, Illinois for the first time ever later this year, but we did not include those on our list. So without further ado, here are the 11 most recent “new” venues to be added to the Monster Energy AMA Supercross schedule.

San Diego will host supercross in what technically is its third ever venue this weekend. The series first visited San Diego in 1980 in what was then Jack Murphy Stadium and raced in that venue through 2014 in what eventually became known as Qualcomm Stadium. The series then went to Petco Park in downtown San Diego from 2015 onwards until this year.

Snapdragon Stadium is built just a few hundred feet away from where Qualcomm Stadium used to be, but the old venue was torn down in 2020. Because of the location though, this weekend’s race will certainly feel like a throwback for locals who can hop on the trolley into Mission Valley or hang out in the large parking lot around the stadium again.

While the COVID-19 pandemic was at its height, Feld Motor Sports had to pivot their strategy for the 2021 season and chose to have only seven venues host multiple supercross races at a time. In came Atlanta Motor Speedway in a bit of a twist as the stock car racing track held rounds 13-15 of 2021. Since then, the venue has stuck and remained on the schedule, hosting the 250SX East/West Showdown in 2022 and continuing now as a 250SX East round in 2023.

The facility is unique in that it creates a huge floor space to build a track on. Given that it is also a speedway, it creates a similar vibe to the Daytona Supercross with the grandstands being the front stretch of the speedway and spanning a long distance from one end of the track to the other.

Supercross finally graced the great state of Tennessee in 2019 for the first time and will be back on the schedule again in 2023. Nissan Stadium drew a great crowd for its first go around also and looks to become a bit of a staple of the calendar late in the season moving forward. It is also the closest race to Loretta Lynn’s Ranch which of course hosts the Monster Energy AMA Amateur National Motocross Championship every year.

Supercross splashed its toes in Denver for 1996 at the old Mile High Stadium before taking a 23-year hiatus from the location. In that time, Mile High Stadium was demolished, and the new venue built right next door popped up to host the Denver Broncos. The popularity of Colorado native Eli Tomac has made Denver a loud venue cheering for their home-state hero and Tomac delighted them in 2022 when he clinched his second 450SX title in the stadium. Empower Field will host round 16 again in 2023.

Every other stadium on this list so far is still part of the current schedule but we’ve reached our first venue that is not. When the old Georgia Dome was demolished in 2017, Mercedes Benz Stadium was then built right next door to the tune of $1.6 billion. Supercross visited the new venue in downtown Atlanta in 2018 but rumors of a large rental fee was perhaps part of the reason the series headed a half hour south to Atlanta Motor Speedway. Maybe someday we’ll be back inside of the home of the Atlanta Falcons.

Another venue that has come and gone in the last decade was U.S. Bank Stadium in Minneapolis. Supercross had gone to the Hubert H. Humphrey Metrodome intermittently from 1994 to 2013 before the venue closed and was demolished. U.S. Bank became home of the Minnesota Vikings and Monster Energy AMA Supercross landed inside of the $1 billion facility just in time for local fans to see Minnesota hero Ryan Dungey’s final year of supercross. The venue was set to be round 14 of 2020 before COVID-19 shifted everything around, though it did make a comeback in 2022. It sounds likely that we’ll see it back on the schedule in coming years.

In 2016, State Farm Stadium became the third different venue to see supercross in the Phoenix area and has certainly nestled in as a staple on the yearly schedule. Previously, Sun Devil Stadium had hosted supercross in 1986, 1987, 1991, 1997, and 1998 before Arizona found their permanent home for supercross in what eventually became Chase Field (formerly Bank One Ballpark) in downtown Phoenix. The home of the Arizona Diamondbacks was also home to some early rounds of Monster Energy AMA Supercross from 1999-2015 before the series headed 20 minutes west to State Farm Stadium. Given that the new venue is home to the Arizona Cardinals, the series tends to race in the venue slightly later in the year (typically February) than it used to at Chase Field, but 2023 presents a different obstacle as NFL Super Bowl 57 will take place on February 12th this year at State Farm Stadium. As such, supercross will visit a little bit later this year when the series comes back west for round 12 on April 8th.

The bay area of San Francisco/Oakland/Santa Clara/San Jose has seen several venue changes over the years. The series first visited the bay area in 1979 in the Oakland Coliseum and has gone to Spartan Stadium in San Jose (1990-1995), AT&T Park (2003-2010), and eventually Levi’s Stadium as well in that time. The new home of the San Francisco 49ers only saw two races in the new stadium though but the Oakland Supercross also taking place earlier in the year in 2015 and 2016 seemed to detract from Levi’s Stadium hosting a larger crown. In the end, the Oakland Coliseum remained on the schedule and still does while supercross has not returned to Levi’s Stadium since Ryan Dungey won a 14-minute (20 lap) main event in 2016.

As previously mentioned, downtown San Diego’s Petco Park was part of the schedule for the San Diego fans from 2015 until… well, now. Petco Park provided great landscapes for the race as the stadium sits right in the middle of downtown San Diego and often you’d see the high-rise buildings in the background of many photos or video shots. But logistically, Petco Park was tough for a lot of reasons with limited parking, a split paddock, and teams needing to pit several blocks away from the stadium and wait for car traffic and even a trolley crossing to ride all the way to the stadium. As such, it appears Snapdragon Stadium will nestle right back in as the spot for San Diego in the schedule moving forward.

Last but not least, MetLife Stadium welcomed Monster Energy AMA Supercross just about a decade ago and will still see itself on the schedule in 2023 as it continues to swap every other year with Gillette Stadium. The race is sometimes referred to as the New York Supercross as the stadium is just a few interchanges and a trip through the Lincoln Tunnel away from Manhattan, but we’ll just stick with the East Rutherford Supercross name for now. This particular location hosted supercross at Giants Stadium from 1987-1991 but that stadium was demolished in 2010 and the new $1.6 billion MetLife Stadium has welcomed supercross with open arms ever since its first installment in 2014.