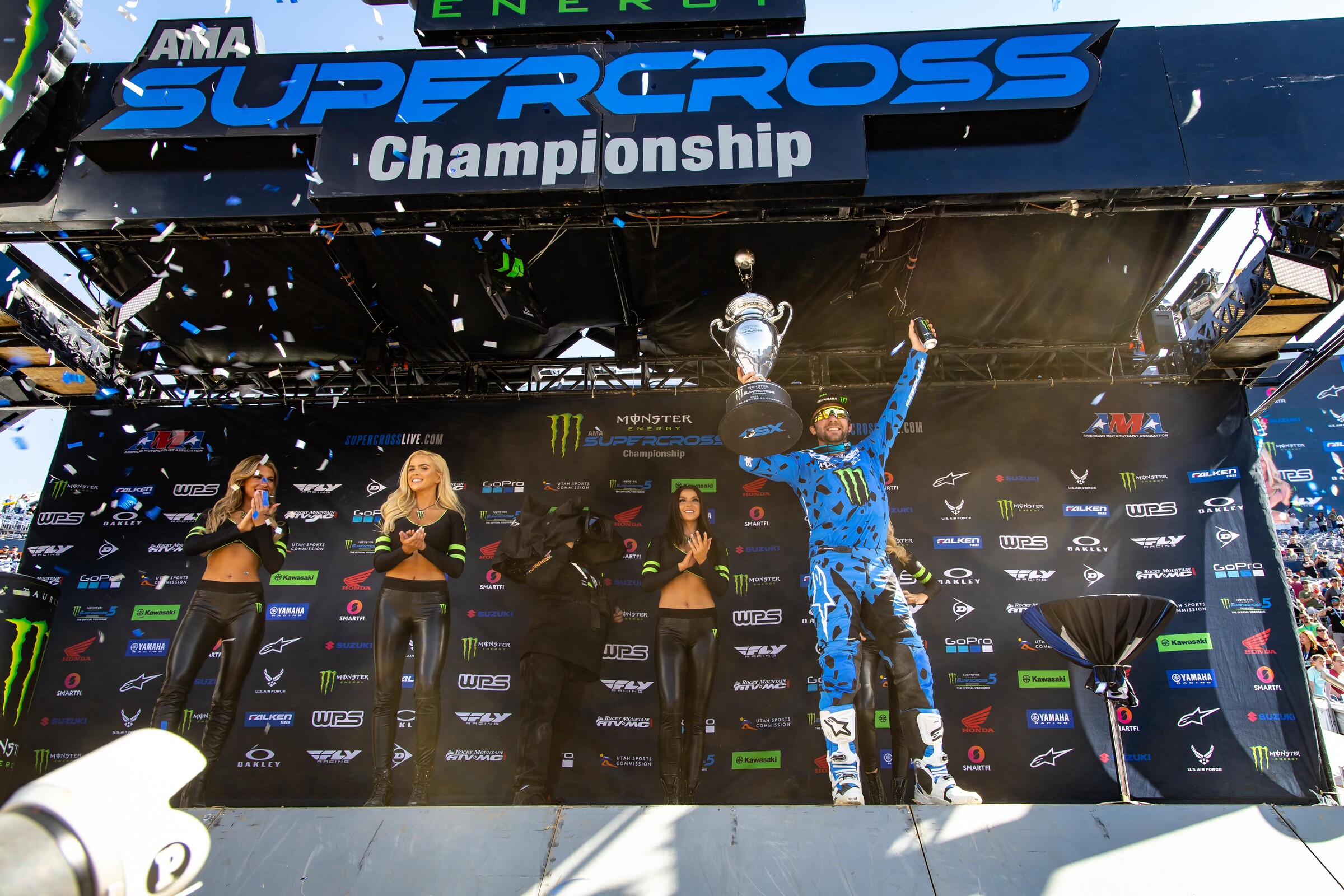 Every year there is a rider who will score more points than anyone else when you combine Monster Energy AMA Supercross and the AMA Pro Motocross Championship. This year it was obviously Eli Tomac who won both the 450SX and 450 Class titles during the 2022 season, pulling in a whopping 905 points along the way. But it’s not always so obvious as just last year, Ken Roczen actually scored more points than anyone else with 799 points despite finishing second in supercross and third in motocross.

With that in mind, we thought it would be fun to check out who ended up in the top 10 in combined points when you factor in supercross, motocross, 250 class, and 450 class together from 2022. While it’s true the 250 riders only compete against half the talent in supercross (because 250 supercross gets split into east and west, while 450s have to go head to head with the full field every weekend) the 250 riders also only get about half the races in which to score points during the stadium season.

The AMA actually uses standings like this to determine AMA National Numbers for the season. The top 10 riders in combined points each year get to select a permanent two-digit number. Most of the riders on this year’s list, though, already had one. Without further ado, let’s check out the top 10 AMA riders from 2022.

You could have been living under a rock in 2022 and still somehow would have known that Eli Tomac had one of the best years of any rider ever. He was able to win his second 450SX title collecting seven wins along the way and then won five races in Pro Motocross to narrowly defeat Chase Sexton for his fourth 450 Class Pro Motocross title. Then he led Team USA to the top step of the podium at the Monster Energy FIM Motocross of Nations for the first time in 11 years as well. He also won an ESPY for Best Male Action Sports Athlete. He did all of this in his first year with Monster Energy Yamaha Star Racing after six years prior spent with Monster Energy Kawasaki. Tomac bet on himself with the move to what he characterized as a move to equipment he felt he could win on. Turns out he was absolutely right.

The changing of the guard is coming with several 450 veterans about to turn 30 years old, and the now 23-year-old Chase Sexton in quite an opportune position. In his second full year of 450 racing, Sexton won his first 450SX main event, gave Tomac everything he could handle for the 450 Pro Motocross title, and helped a winning Team USA Motocross of Nations team. The one blemish from Sexton’s 2022 season was his frequency to crash during supercross which likely cost him several more race victories. Even so, he was a consistent front runner and looks poised to make 2023 the year of #23.

If not for a year for the ages from Eli Tomac, the story of 2022 could have easily been the resurgence of Jason Anderson in his new home at Monster Energy Kawasaki. Anderson left Rockstar Energy Husqvarna at the end of 2021, a team which had been his home since his professional debut, and immediately found success with his new program at Kawasaki. He won the second race of the year at Oakland and would tally up six more wins along the way during supercross. If not for some ill-timed on-track run ins or a crash out of the race in Detroit, Anderson could have been the 2022 champion. He doubled his career win total and won more races in 2022 than his 2018 championship season. He also won his first ever 450 class overall in Pro Motocross to put together what arguably may have been the best year of his career.

At this point, there’s almost nothing you can say about Jett Lawrence that hasn’t already been said. He’s a generational talent who put every piece of the puzzle together in 2022 to win more races than anyone and claim both a 250 Supercross and 250 Motocross title along the way. The stats show he was dominant but the visual showed a much more controlled and mature Jett Lawrence in 2022. He’s arguably ready to be on a 450 already at 19-years-old but Honda HRC are being as patient as possible to keep him on a 250 for supercross in 2023, before going 450 for 2023 Pro Motocross. As he prepares to transition to a 450, 2022 was certainly quite a preview of what may be soon to come for Jett in the premier class.

Hunter Lawrence checked off a lot of boxes in 2022 as he became a consistent title contender both indoors and out. He only scored 29 less points than his brother all year but was helped slightly by the fact that 250SX West is one round longer plus Jett missed the supercross finale with a tweaked ankle. Regardless, Hunter won four supercross races in 2022 and gave a legitimate scare to Christian Craig down the stretch after Craig had opened up a huge points lead. Hunter rode well outdoors too but could never quite claim another victory as he saw his brother and eventually Jo Shimoda eclipse him in points outdoors. He did sign an extension with Honda HRC through 2024 this year as well so the future remains bright for the elder Lawrence brother.

Jo Shimoda’s 2022 felt like a tale of two halves. In supercross he could just never really get rolling. After winning his first 250SX main event in 2021, the ceiling looked tall for Shimoda in 2022 but he only hit the podium once during supercross and even injured his ankle at Anaheim 3. Outdoors though, it all changed. Shimoda became one of the fastest 250 riders on the planet on a number of occasions and he parlayed that into two wins overall and eight podiums from 12 rounds. Shimoda finished second in the 250 class championship to Jett Lawrence and certainly factors to be a title favorite heading into 2023.

Justin Barcia was the only rider to finish in the top 10 on combined points for 2022 that did not convert on a race victory. He was close on a number of occasions and remained right in the mix for the 450SX title until well into the second half of the season due to his consistency. He eventually finished third on points in the championship but was penalized 10 points at the final round due to a collision with Malcolm Stewart that pushed him back to fifth. Pro Motocross was a bit more of a struggle for Barcia who picked up just one podium overall en route to eighth in the points. All in all, it wasn’t the best year of Barcia’s career, but he still scored the fourth most points in the 450 class all year which is very solid.

After trying for over a decade to put all of the pieces of the puzzle together, Christian Craig finally claimed his first professional championship in 2022 with the 250SX West crown. Craig was the class of the field for the first six rounds of the championship and built himself a sizeable advantage to which he was able to manage down the stretch. That title clinching moment will now also be the last time Craig ever raced a 250 professionally as he moved up to race 450 Pro Motocross in the summer where he fared very well. He also signed a two-year deal with Rockstar Energy Husqvarna in the off-season to compete on a 450 full time moving forward. Saying 2022 was a career defining year for Craig would be putting it lightly.

How good is Ken Roczen? Well, he himself said he was never comfortable on the bike pretty much all of 2022 in what was now his final year with Honda HRC, he missed half of supercross after pulling out for health reasons, and despite that, he still won the opener and scored the fifth most points of anybody on a 450 in 2022. By no means was 2022 a great year for Roczen based on his usual standards, but he was still very solid in Pro Motocross where he won the Thunder Valley National and finished fourth in points. His move to Suzuki for 2023 has been the talk of the off-season and how Roczen does returning to the brand he left in 2016 will remain a huge storyline through much of the upcoming year.

RJ Hampshire’s win at the 2022 St. Louis Supercross was certainly one of the feel-good stories of the year for a guy who had been so close to a supercross victory many times before. This time he finished the job. Hampshire was simply solid in 2022 picking up another outdoor win at Budds Creek later in the year and being the final rider to eclipse the 500-point mark on the year. He was outspoken about his struggles with Husqvarna’s new 250 package in 2022 but still had one of the best years of his career regardless. He’ll certainly have his eyes on a championship heading into 2023.