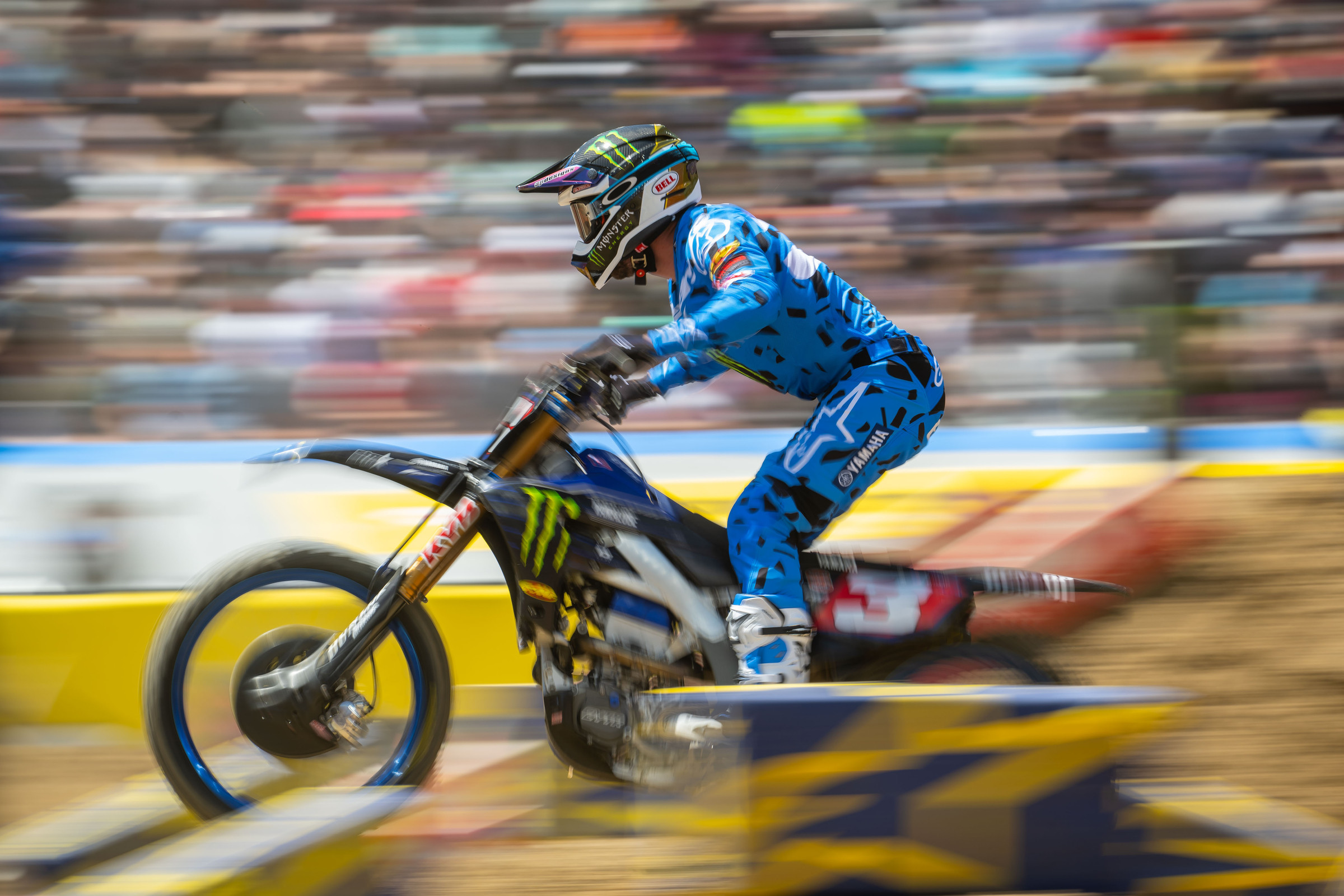 Stats of the Week: Two-Time Tomac

With his fifth-place finish on Saturday, Eli Tomac claimed his second premier class 450SX title in Monster Energy AMA Supercross. Here are a bunch of stats on Tomac’s title:

-12th with two (or more): Tomac became only the 12th rider in AMA Supercross history to earn at least two premier class titles.

-8th with two (or more of each): Tomac became only the 8th different rider to earn at least two AMA Supercross and Motocross premier class titles.

-4,746 days or 13 years: Since the last time Yamaha won a premier class AMA Supercross title when James Stewart was crowned champion in 2009.

Jason Anderson claimed his sixth main event win of the season, moving him to 13 career 450SX wins. It was also the first time in Anderson’s career he won three consecutive main events in a row.

Hunter’s Third in a Row

Honda HRC’s Hunter Lawrence Claimed his third 250SX main event win in a row and he has won four of his last five main event starts.

Hunter Lawrence now has four wins on the season, joining his brother and 2022 250SX East Region Champion Jett Lawrence, who also has four main event wins this year. Through 16 rounds, the Lawrence brother duo has claimed half of the 250SX race wins! The Anaheim 3 Supercross is the only race this season without a Lawrence brother on the main event podium, as Hunter officially scored 18th after crashing hard in the whoops.

Christian Craig has yet to lose a heat race in 2022, finishing first in all seven heat races in the 250SX West Region after winning his heat in Colorado. Craig also finished on the podium in the main event as he continues his perfect streak of being on the podium at every 250SX West Region round of the season so far, as he eyes his first professional title on Saturday.

Malcolm Stewart, who entered the season with one 450SX podium to his name, tied his 450SX career-best with a second-place finish at the 16th round, which was his third podium finish of 2022. It was also Stewart’s 12th top-five finish of the year as he sits third in a battle with Justin Barcia and Marvin Musquin for third place in the standings.

Stuck in the Webb

Unfortunately for Cooper Webb, his name is once again in this feature for not the reason he wants since he has yet to win a main event win, as his longest win-less streak since his maiden 450SX win continues.

Jerry Robin returned to action for the Denver Supercross and for the race at the home of the Denver Broncos, Robin and his crew had this NFL-inspired kit set up for their “sport series” gear.

“I qualified first again and won my heat race, which was good. I had a really good day going and pulled the holeshot in the main event but just made a dumb mistake – hit the little curb they had by the mechanics’ area and fell over. After that, I feel like I rode pretty good and made some good passes to get all the way back to fourth – not ideal, but it’s something I can build off of because I feel like I rode well after my little incident. I’m looking forward to having a good week and doing the final round in Salt Lake City.”

“Denver was an average day for me. I had a decent start in the main and kind of got pushed wide on the opening lap. I got up to sixth and I kind of stayed there the whole race. I latched on with the guys ahead of me and some guys went down and I made some passes. Overall, it was kind of a struggle of a day. The track was very dry and sketchy, so not ideal conditions, but we’ll give everything we can for this last round.”

A little bit of a difficult day. I had another really good start in the main and was having a really good race, charging hard and really close to the podium. Unfortunately, I had a crash and that was pretty much all the race wrote. I’m definitely disappointed in the day but definitely did a lot of great things as well. I had a lot of great starts today and I’m looking to bring those into SLC and get after that podium!”

"I felt really good qualifying, I think I was eleventh, about .5 seconds off of fifth place which I'm happy with. The heat race went smooth, but in the main event, I picked a far outside gate just to get a good rut. But then I just butchered the start. It upset me because I knew I shouldn’t be that far back. I was in about 18th and then fought my way back to eleventh. I'm not happy about eleventh, but we'll take the positives out of the day. We're looking forward to the last round and I'll fight to hold eighth place in championship points."

"Qualifying started out pretty well, I felt comfortable and got up to speed quickly. Then, it was not a great heat race. I had a fall, came together with another rider, and just barely made the main event. The main event was pretty much a wash. The silver lining here is we're healthy and will go again next weekend in Salt Lake City and wrap this season up."

"I've been trying to work on my starts during the week and get it figured out, but I just haven't found the right technique to get out of the gate. I went into the LCQ, I was around eighth and was moving forward. I made a mistake in the sand section. My rear tire slipped out from under me. The track was really dry and hardpack, but it was on me. I was trying to get to the inside and make a pass and it just slid out from under me. After I crashed somebody came up and hit me so that was the end of my night."

"We didn't ride to our potential. Adam had three pretty big falls today which put him behind the eight ball. Justin had an issue right at the start of the main that he tried to ride through, but it just kept getting worse. He rode great all day, all through practice. He was top of the board at one point, and it was looking to be a good day for him. It's just a bummer that it ended this way. It's on the team and we'll regroup and do better for him so we can finish this season on a high note. Brandon's locked in a pretty tight points battle for eighth. We go into the final round up three points on the ninth-place rider, and that's a place we want to keep. For Brandon to be in eighth in the points is a big deal, especially considering the growth that he's shown since last year. So I’m pumped for him."

"The early part of my Main Event was really good with all of the passes I was making to get up into third place. A better start would have made it much easier to get into the battle at the front but, I still had a chance at second or at least a podium finish. Unfortunately, I made a mistake and lost third pretty close to the end and that never feels good but, I fought back for the spot and I feel my racing was strong. I will aim for a podium finish next weekend in the Showdown at Salt Lake.”

“Today was a step in the right direction in terms of comfort on the bike. I was towards the front way more than the back and I had some really good starts. In the Main Event, I hung in third for a little bit but just couldn't find that pace and lost a few positions to sixth. On the last lap, I got caught behind a couple of lappers and they went like they're going for the triple and backed out at the last second and I had nowhere to go, so I had to roll the triple and lost a ton of positions. That one stings, for sure, but we'll come back and try to be a little bit better in Salt Lake.”

"The track was super slick all day. That was my first LCQ of the year so I'm very glad to get out of that clean and also get the win. In the main, I came from very far back and ended up 13th. It's not the best result, but I'll take it for today."