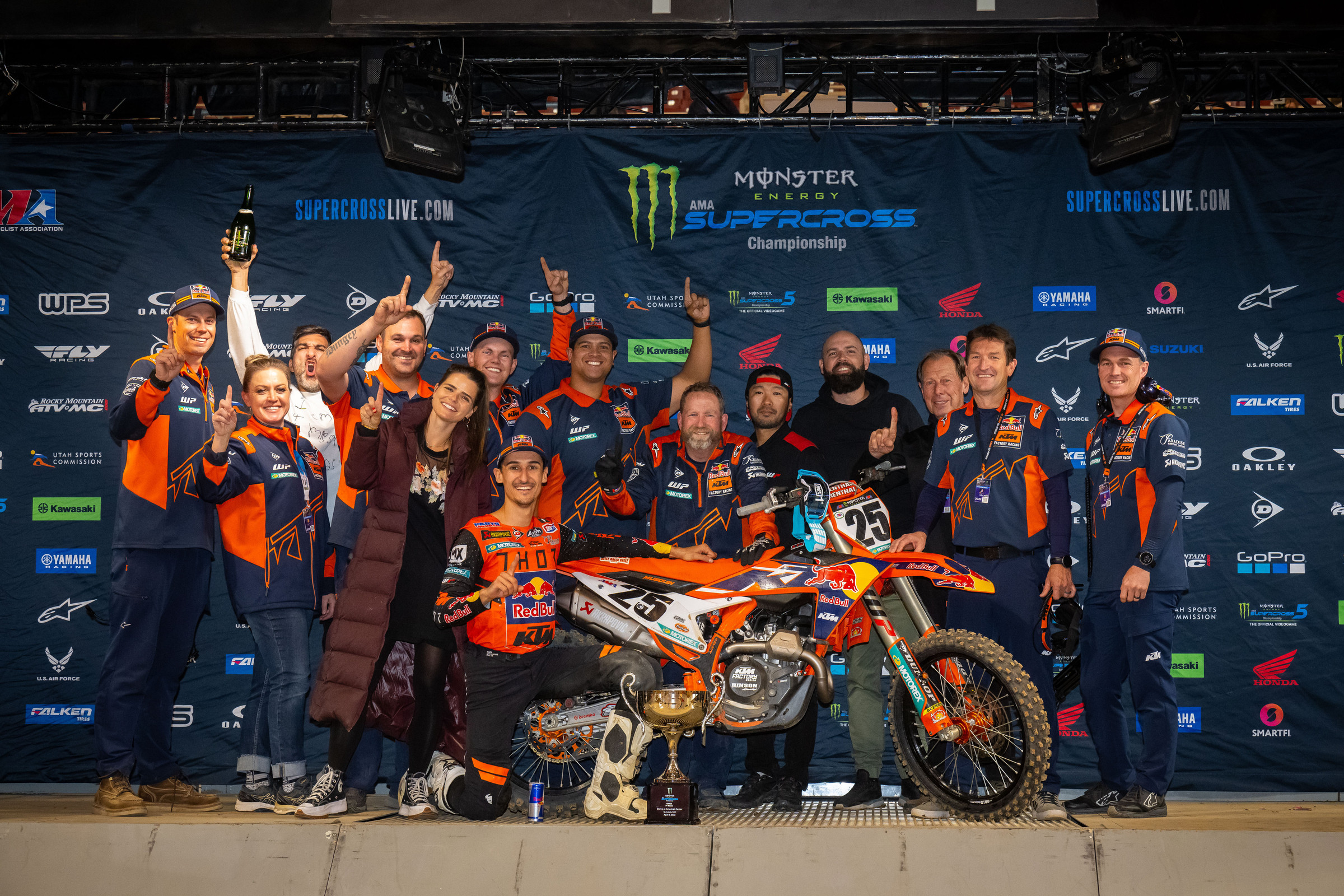 There’s a lot happening right now under the Red Bull KTM tent for both the Monster Energy AMA Supercross Championship and the upcoming Lucas Oil AMA Pro Motocross Championship. I caught up to the Director of Motorsports in North America of the KTM Racing group Roger De Coster after the Denver Supercross to cover a few different topics within his team. As usual. “The Man” was pretty honest and forthright about the teams plans and his thoughts.

Racer X: I want to talk to you about the outdoors stuff, because you guys made some big news. But first, Marvin Musquin, another podium. Riding really well. It was kind of like a supercross-only, last-minute thing and he’s really coming around.
Roger De Coster: Yeah, he’s been really good. He is in really, really good shape, as you have seen, especially the second half of the supercross season. So, it’s nice to see him doing as good as he’s doing. I’m happy for him.

You had [David] Vuillemin at Suzuki when he wasn’t in great shape, and now he’s Marv’s trainer. So maybe he figured some things out.
Vuillemin understands our sport really well. I think he learned. I remember I think in ’99 when he came up, Ricky was really worried about him. At that time, he was pretty stubborn. He did things his way. If you look back, he probably could have won if he did what he is advising Marvin to do now.

That’s the joke we make with him. You’re absolutely right. Cooper Webb, so-so day today. We know he’s not doing outdoors. Hasn’t gone his way. Probably a little bit of bike, a little bit of Coop. What’s your take on that?
He lost his way. Once you’re behind, it’s very tough to keep the confidence and to be on the very top. I think he was a rider that relied a lot on that. He made too many changes after the last supercross season, and now he’s been trying to correct it. But, like I said, it’s really tough once you’re behind.

When Ryan Dungey first told you he was thinking about coming back, did you think he was joking?
I thought it was the same old what he had told me. He had asked us multiple times over the years since he stopped. Already maybe a few months after he stopped, it started already. In a way, I am surprised that he took as long as he did, but I didn’t think it was going to happen anymore. When he came back this last time, I basically told him, “You better speak to Pit [Beirer, Motorsports Director of KTM] because if I speak to him, you’re going to change your mind and then I look like the dummy.” But he went over to Austria and talked to Pit and Pit said, if the team is okay with it, you can do it.

And Antonio Cairoli coming over. Do you think there’s chances if everything goes okay that both those guys go more than two races? If they’re happy and you’re happy?
Of course, I want to see both of them do good, but it’s not going to be so easy. Also, we have, I feel, a little bit of a false idea because we have not done so good at Des Nations the last few years. So, I think that the general thinking is that any of the top Europeans that come over will just walk away with it. I don't think it’s going to be that easy. They are of course super good in outdoors. That’s what they do all the time. Still, I think the Americans on their home ground…

Their track prep, their bikes, their home ground…
Yeah. They’re not just going to lie down and allow them to take the podium.

I hear [Jeffrey] Herlings isn’t looking good. Tried to ride. Didn’t go well. We’re less than a month away, so I wouldn’t look for him to come?
The idea from the factory side is he should take care of his foot, both of his feet, 100 percent before taking chances to aggravate it and mess up his ’23 world championship season. I’m sure that’s what Pit wants and we all want for him. Now they only have him as a top dog in the 450 class on the KTM side, so they really need him.

Note: Since this interview on April 30, KTM announced on May 3 that Herlings would be officially sidelined for all of 2022 with hopes of being fully prepared to make a run at the 2023 FIM Motocross World Championship (MXGP) title.