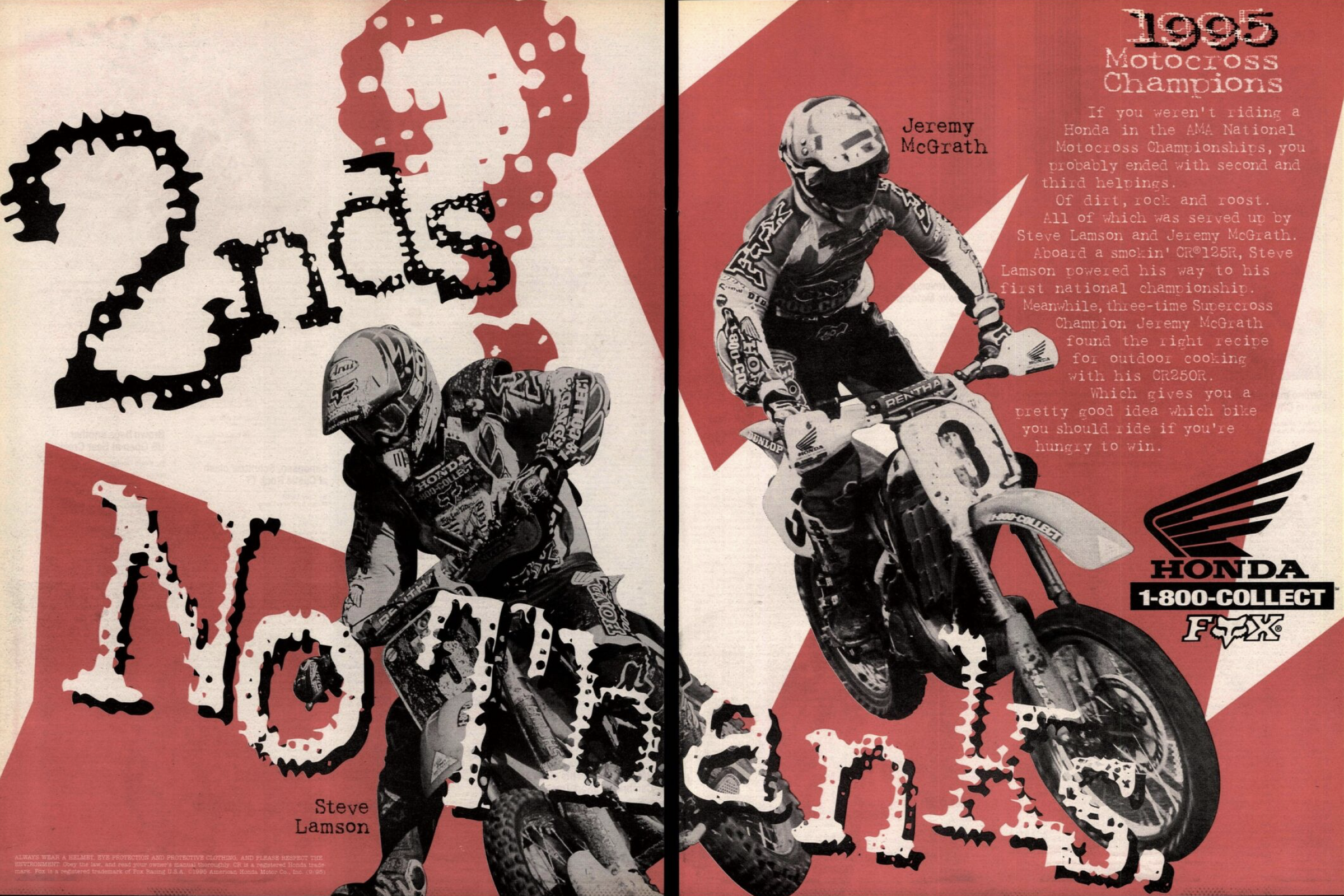 As we approach the opening round of the 2022 Lucas Oil AMA Pro Motocross Championship, we are counting down to the days by going through each of the 50 years in the history of AMA Pro Motocross. Today, the MAVTV+ Countdown hits 1995, a fun slice of ‘90s moto.

In our previous coverage of the 1994 AMA National Motocross Championship, we mentioned the demise of the 500 class and how it would eventually inject deeper competition into the now season-long 250 class. That began to show in 1995, which boasted a super-deep field in the 250s. Kawasaki’s previous champions Mike LaRocco and Mike Kiedrowski were there. Honda moved up two-time 125 National Champion Doug Henry. Yamaha moved up 1992 125 National Champion Jeff Emig, alongside 1994 up-start and series runner up John Dowd. Suzuki was attempting to turn its lackluster U.S. racing fortunes around by hiring its old leader, Roger De Coster, back to the brand as team manager. Roger left Suzuki to go to Honda in the 1980s, setting up a run of dominance. Could he do the same with Suzuki?

He had some talent to help, as 1994 250cc World Champion Greg Albertyn was coming to the U.S. He also brought his mechanic Ian Harrison over with him, and Harrison would later become De Coster’s right hand man. Albee was first big import to the U.S. since Jean-Michel Bayle. Unfortunately, he would separate his shoulder in the Orlando SX opener, a sign of things to come for the South African.

Lost in the hype of riders moving up, defending titles, or moving over was the fact that supercross superstar Jeremy McGrath had gotten in shape and vowed to start winning in motocross. He had already blitzed the field in supercross again (although LaRocco was keeping some pressure on until he broke his arm at the Charlotte Supercross.) McGrath had already claimed the all-time wins record in just three seasons in the 250 class, ending ’95 with 29 AMA Supercross main event wins.

The outdoor season started at Gatorback, and the anticipated showdown between AMA #1 LaRocco and GP #1 Albertyn started immediately, with a fantastic first moto showdown and a narrow win for LaRocco. But in moto two, they both broke wheels and DNFed, and McGrath took 3-1 scores to the win, his first 250 National overall.

Kiedrowski rebounded to win round two at Hangtown, then a shocker showed up at High Point: Damon Bradshaw, who retired at the end of 1993, returned to the races with Team Yamaha. On a muddy day, Henry would score the overall. This led to a wild race at Budds Creek, with Henry battling his teammate McGrath for the points lead, only for Henry to get out of control on his Honda and absolutely launch down a massive downhill. He broke his back and ended his season, and nearly his career. That section of the track is now called Henry Hill.

LaRocco’s title defense was already looking grim when he missed races with that broken arm, then he tore his ACL in a first-turn crash at Spring Creek. Albertyn broke his wrist. Meanwhile, McGrath was dominating the races with Emig providing his stiffest comp, and they battled hard. In the end, McGrath prevailed, proving to his critics that he could indeed win outdoors, the 1995 AMA 250 National Championship now on his mantle.

Honda’s CR125 was still hard to beat in the 125 Nationals. Steve Lamson was the favorite but hurt his knee early in the season. This left Suzuki’s Damon Huffman and Kawasaki’s Ryan Hughes fighting for the title, until Lamson mounted an incredible comeback from 60 points down. It came down to Lamson versus Hughes at the Steel City finale, and Lamson got the better of it to win the last moto and the title in clutch fashion. On the last lap of the year, the chain snapped on Hughes KX125, so he pushed his bike to the finish, creating one of the most iconic images of the era.

Hughes had another shot at history in the FIM Motocross of Nations in Slovakia. With Team USA’s record-breaking win streak snapped in 1994, the squad aimed for revenge in ’95 with Lamson on a 125, Emig on a 250 and…well, the 500 class was tough for the Americans without a 500 National Series. Kawasaki had an old KX500 laying around, so they just needed a Kawasaki rider to ride it. LaRocco was leaving for Suzuki and Kiedrowski was retiring, so Hughes got the pick. He rode valiantly, as did Emig and Lamson, but ultimately came up just short to the Belgian team of Marnicq Bervoets, Stefan Everts, and Joel Smets.

And speaking of Smets, he won the 1995 FIM 500cc World Championship aboard a Swedish-made Husaberg. They advertised his success with a win ad in Cycle News that begam, “Forget what you think you know about 4-strokes. Sure, most have the acceleration of a moped, yes most weigh about the same as a ’56 Buick and handle about as good. But you haven’t ridden the one that just won the 500cc World Championship.”

Also beginning to become a thing was the freestyle motocross movement, powered by VHS tapes like Fox Racing’s Terra Firma series and Crusty Demons of Dirt. Kawasaki Team Green’s Ricky Carmichael won his last AMA Amateur titles as a minicycle rider and was a year away from going pro. And terrible news came out of the Baja on June 3 when off-road icon Danny Hamel was killed when an unmarked police car pulled out in front of him as he was going 100 mph just after the start of the Baka 500. He was just 23 years old. News of his passing even made the New York Times.