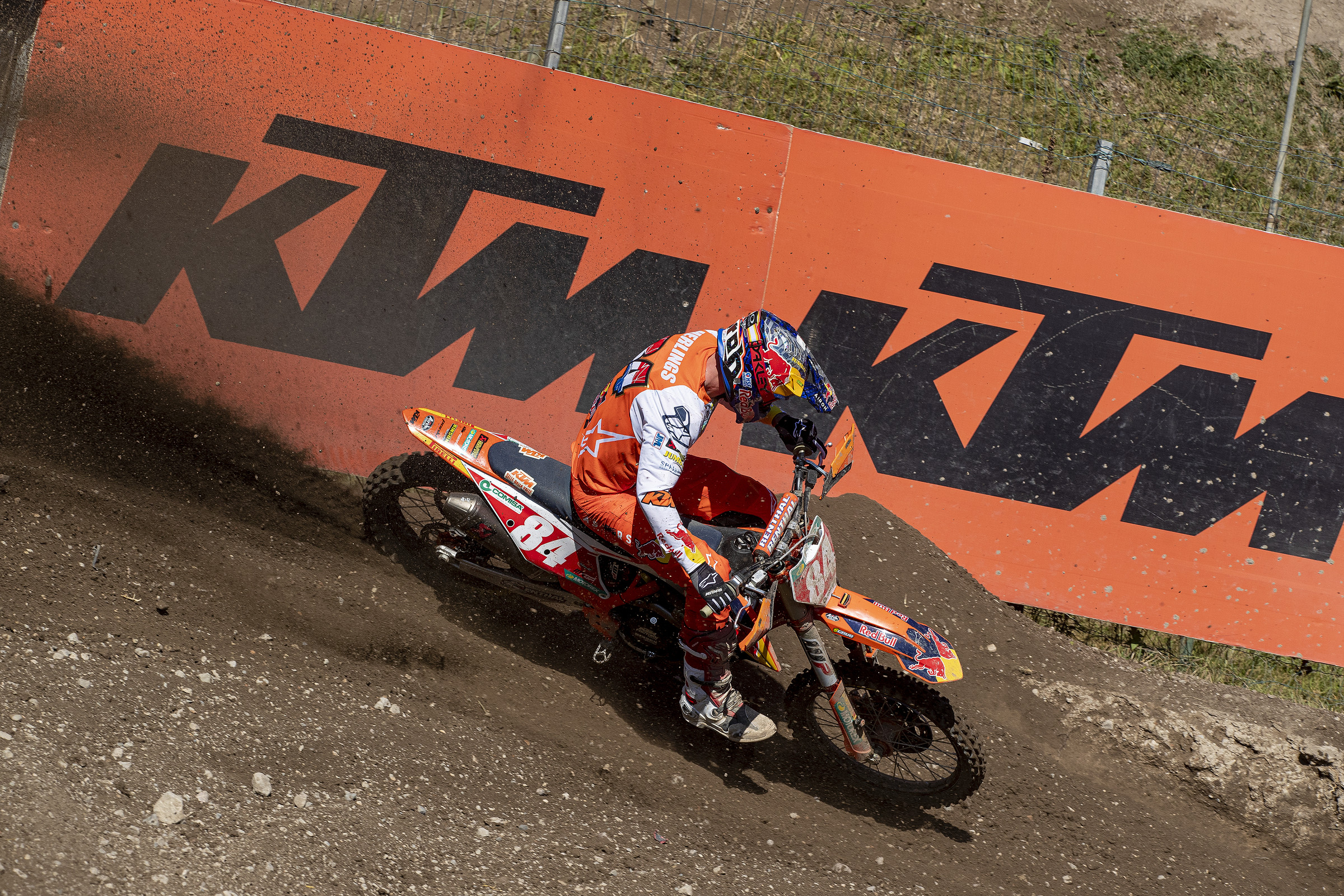 The FIM World Motocross Championship (MXGP) has but two rounds remaining, and they’re set to be all-time in terms of drama and tension since three riders on three different brand sit within three points of each other with four motos remaining. Currently Monster Energy Kawasaki’s Romain Febvre sits on top, with Honda HRC’s Tim Gajser one point behind and Red Bull KTM’s Jeffrey Herlings third, three points behind Febvre.

These three have had many close battles on the track but so far everyone has avoided the take outs or T-bones that could make emotions boil over. However, there was added drama over the weekend when Herlings, who crashed twice in the second moto, got a gift of one extra position when his fellow KTM rider Tony Cairoli moved over for him on the final lap. It moved Herlings from fifth in the moto to fourth.

There was no shortage of opinions on this after the race, from both the KTM riders and also the camps for Febvre and Gajser. Herlings does have allies with teammates Cairoli and also Jorge Prado, who seems to holeshot every moto.

Here are some key thoughts after the race.

“What he [Cairoli] did, I don’t know if I could have done it,” Herlings was quoted to our GP scribe Adam Wheeler. “Only the greatest and the biggest champions would do that. To me he not only showed his loyalty to KTM but helped me a lot because those are two very important points for me. Only a real team player would do that. Jorge as well; I had to pass him three times in that second moto. It was a real team effort, and I cannot thank them enough.”

“I’d prefer to be on a KTM right now because Jorge is the holeshot master and Tony is also so fast,” Herlings judged. “The Honda and the Kawi guys are basically alone. In the second moto Tony was matching my speed and he could have attacked me, but it was like he was my wingman. He made sure nobody could get around me; for what he did…he’s the best-ever.”

“Where can I start?! The day actually began quite good but then went downhill from there! My start was alright in the first moto but I could not get in my rhythm for the first three laps and at one point I was 4th but lost a lot of time passing Jorge. Basically, Romain and Jeremy had then gone. 3rd place was still OK. In the second moto I really wanted to attack and go for the win. I was into 2nd on the second lap and I thought ‘this is going to be my moto’. I went over the finish line jump and wanted to chase Tim because I felt I had the speed but the bike went left-right and I was shot-off. It was my mistake but the bike was then a bit bent and I needed some laps to get used to it. The rhythm was coming back and I was close to Romain but my hand came off the bar over that same jump and I was shot to the moon. That was a big hit with a big crash. The bike was even more bent! I knew then I would need something special today. I was 10th and I needed to keep pushing because every point counts. To go home only 3 points down, I know it is still in my own hands. I didn’t make it easy for myself and the last two GPs here have been tough but it is all still possible. Thanks to Tony. Only the greatest and the biggest champions would do that. To me he not only showed his loyalty to KTM but helped me a lot because those are two very important points. Only a real team player would do that. Jorge as well, I had to pass him three times in that second moto. It was a real team effort and I cannot thank them enough.”

“Pretty good today. In the first moto I had a good start but made a few mistakes on the first laps and dropped from 5th to 7th. I passed back to 5th but it was difficult to make those moves: sadly I couldn’t make the same excellent start that I had on Wednesday. The guys in front were too far by the time I could get through. I felt a podium was possible, even if a top-five is always good. In the last moto I had the pace to go a bit faster but I did not want to get in the middle of the fight for the championship. Jeffrey made a crash in front of me and again there was a big gap. I had settled for 4th when I saw Jeffrey was coming on the last two laps. For me 4th or 5th was not that important because I knew I wouldn’t have been on the podium so I gave [away] my position. I hope a few points more will help him and KTM for the championship. That’s KTM’s goal for this year.”

“5th overall today. Happy with the speed, not with the result but sometimes you need to Respect team orders and Help your team mates. Every Brand would have done the same if they had a team mate fighting for the world title. So to that few people sending me life threatening direct messages. STOP! I don’t deserve this because I always behave like a real gentleman INSIDE and OUTSIDE of the track!
Grazie a tutti per il tifo come al solito super☺️🇮🇹📣”

“For sure when there are some KTM boys we have to take care of what they are doing,” Febvre said to Wheeler.

“We worked on the start again this week and the first moto was good, but not the second. But I was feeling really good today and could make some nice passes to come to second in the first moto. Jeremy was riding really well in front but with two laps to go I saw that I was catching him; we had a gap so I knew that if I made a mistake I could still be second. Unfortunately I had quite a big crash but it didn’t affect me; I went down hard but luckily I don’t even have scratches. My start was not so good in the second moto and I was a long way back but I passed something like eight guys on the first lap, worked my way to third and came close to Jeremy when he made a mistake. Then I started thinking too much – do I go for the GP or settle for the red plate? – and in the end I lost my pace. It feels good to take the red plate with two to go. I don’t feel any pressure; I always take everything as it comes. It is several years since I have been in this position and we are so close; again just three points for three riders. It’s good to be where I am but in the end one of us will be champion and two will be disappointed. If I crash, then I crash but for sure I will give my best and let us hope it is enough. I can smell the taste of the championship!“

“It’s like that. They have a good team with three top riders: we don’t have that,” shrugged Gajser to Wheeler. “Myself and Romain are alone. We can only give our best.”

Gajser might not be alone for long. This week, Honda announced that MX2 class contender Ruben Fernandez would move to the MXGP class on a CRF450R for the final two rounds of the season. He will continue to pit with his 114 Motorsports Honda team, not with Gajser over at Gariboldi. While Honda is billing this as merely a change for Fernandez to gain experience on the larger machine, the timing is pretty suspect, considering Fernandez will return to the 250cc division for 2022. Here's a snip from Honda's PR:

With Fernandez able to ride in MX2 again next year, these two races will just be an opportunity for him to showcase his talent and see where he stacks up and give him a little bit of experience before he has to make the full-time switch to MXGP in 2023.

Tune in Sunday to watch the MXGP of Lombardia