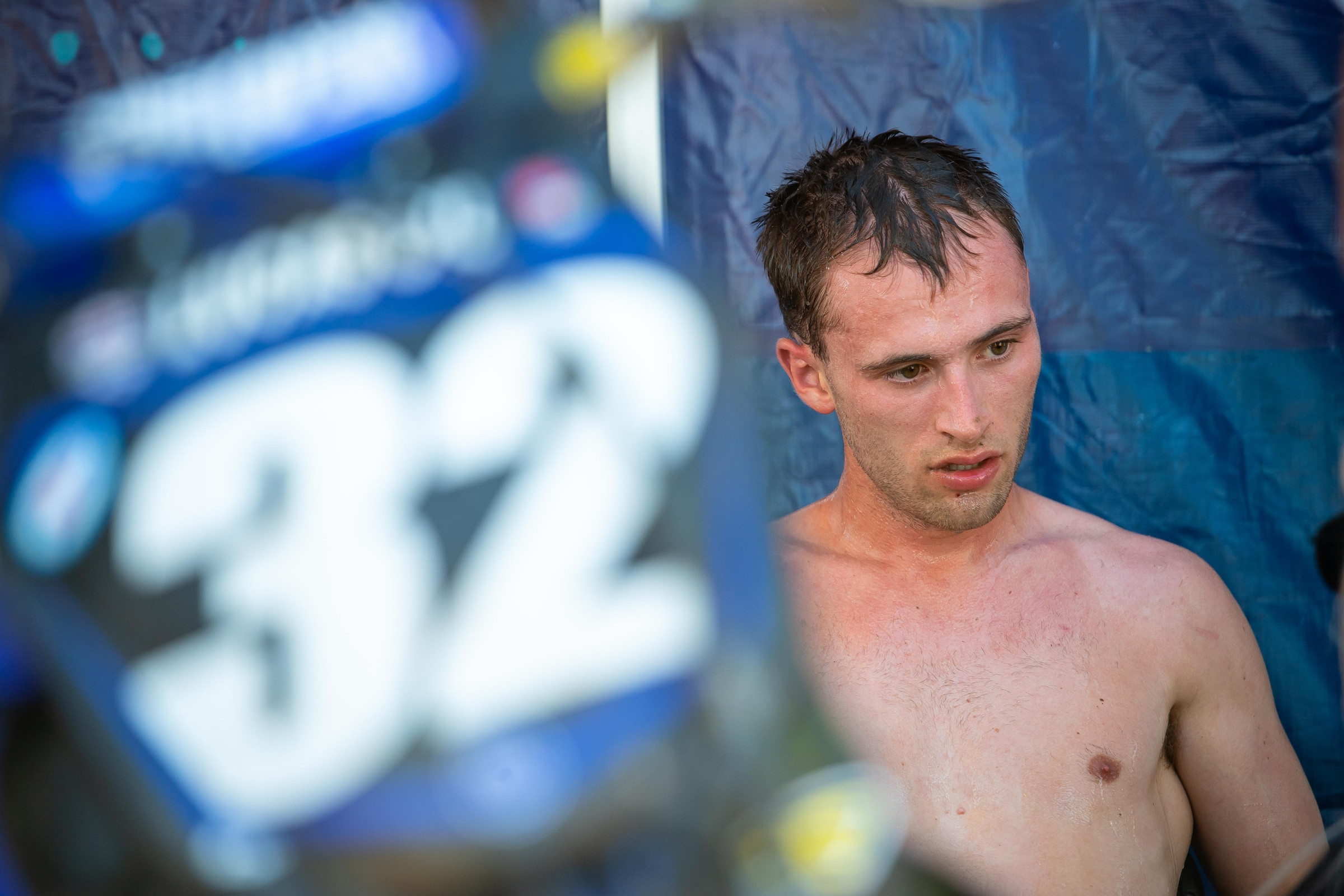 The Conversation The Long Season

In the long racing season from winter through summer, Justin Cooper was the only rider embroiled in a title battle the whole way. Both 450 champions Cooper Webb and Dylan Ferrandis weren’t in contention for long during the championships they didn’t win. The 250SX East Champion Colt Nichols was not a factor in the 250 Class motocross chase. And 250 Class National Champion Jett Lawrence won races in supercross, but crashed out of title contention. Cooper was in the thick of it the whole time. He learned from that pressure, he was better for it, but he came up short of his ultimate goal of winning two titles. So after wrapping the 250SX West Championship and coming up six points shy of the 250 National Motocross Championship, Cooper left the track at Hangtown and took a long break.

When we talked to him on October 20, he had not even ridden since Hangtown on September 11. He was scheduled to get back on the bike right after that, so he took five weeks off.

“I needed the break,” Cooper said. “It’s been a long year and I haven’t missed much racing over the years. I’m thankful to not get inured that often and when I do they’re pretty small. It’s caught up to me the last couple of years. You need some downtime when you’re not struggling with injuries.”

Cooper did deal with injuries, a foot problem before supercross and a thumb injury that proved costly in motocross. At the Washougal National, it looked like Cooper was set to take control of the 250 Class, having grabbed the points lead from Lawrence at the previous round. Cooper was headed to the overall win with 1-2 scores and a big points gap since Lawrence was suffering from a mediocre day. Then, with two laps to go, he crashed going up Horsepower Hill.

“Yeah, Washougal was awesome for me, I really felt good that day, and the first moto was good for the championship, I think I gained 11 points,” he explains. “Second moto, I was just starting to settle in for second. I tried to make a run at Jeremy [Martin] a couple times, but it’s hard to make a pass and we were both going pretty fast. Then all of a sudden, I was on the ground. It was my best feeling race and then my worst. That’s how it panned out there.”

It wasn’t long before Cooper realized something was amiss.

“Once I got up, I was tired at that point. I just couldn’t get going—I felt like I was going two miles an hour. When I pushed down on the bar in the breaking bumps, I felt something was wrong,” he explained. “It was definitely not good—it shouldn’t be hurting that quick, that bad. I was looking forward to the break we had, and luckily it came up right after the race. It was hard to get around that track the last two laps. I remember spraying the champagne and it was painful. I remember everyone was so happy with the way I rode, but I knew something was wrong, and it was going to be hard to get back to that level.”

The series went into a three-week break. Cooper stayed off the bike hoping the thumb would heal in time for the five-race stretch run in the series. The thumb did heal enough, actually, for Cooper to deal with it. But he lost a lot of fitness because he couldn’t ride during the week.

“I was leading the championship and there’s only one thing to do,” he said. “We had three weeks. My heart sank and I knew what I was in for. I had broken my foot before supercross. I was able to get through that, but the thumb is way different. It was the throttle hand and it was not comfortable at all, to say the least. I knew what I would be facing.

“There was no riding at all,” he said of the time between Washougal and Unadilla. “Looking back on that, that’s what cost me the championship, the lack of seat time. Honestly, I could deal with the pain. I was doing what I could to let it heal. We had five races in a row at that point. So I did what I could on the spin bike. I was getting my heart rate up to 185-190, doing everything I could to resemble riding, but at the end of the day it took me down a notch. I couldn’t sustain that race pace. My cardio couldn’t keep up with it.”

Hindsight is always 20/20. Cooper wonders if he would have been better off riding more, staying fit, and just fighting through the broken thumb.

“The thumb was painful and very uncomfortable, but I was able to push through that,” he said. “I just couldn’t catch my breath in the motos.”

Cooper chose not to go public with the info. This is a sticking point for everyone—fans wish riders would stop keeping secrets. Cooper thought he would give Lawrence a mental advantage if the word got out.

“It’s a close championship and you don’t want to show any weakness, and if your competitor shows weakness you’re going to be more motivated to go after it. I was just trying to keep it a level playing field. I think people would feel like, ‘This guy’s not 100 percent, I’ve got him this weekend.’”

Before Unadilla, Lawrence was on the ropes, taking 9-3-4-6-7-2 finishes at the previous three races. Cooper had the momentum, but he knew, with the injury, he’d probably give all of that up once they rolled out at Unadilla. He had kept the injury secret, but if he rode poorly, it would be for naught.

“Oh I was terrified!” he said. “In practice, it kind of reminded me that I could still do this. I wasn’t feeling good going into Unadilla. First moto, yeah, there were a lot of rumors going around that I was hurt, and I think some people got word of it. I had to prove that nothing was wrong and that I was there to win. Big monkey off the back to win that moto, for sure. I didn’t expect much. I was just hoping to be maybe a podium guy. I didn’t expect to win, that’s for sure.”

For a brief moment, it appeared he might have avoided disaster. Then Lawrence won moto two and soon took control of the series. Lawrence cured the troubles with his starts and took off with wins and points. Cooper also got sick before the Budds Creek round, where he again won the first moto but struggled in moto two. In a long season, a rider has to either avoid illness and injury to win titles, or manage them well enough to survive. That’s part of the game, and Cooper just missed.

So does that make it a good season or a bad one? He notched his first professional title, and this was his best outdoor campaign yet. Good or bad?

Cooper did grab his long-awaited 1-1 at the final round of the season at Hangtown. He dismisses some of that, though.

“I feel like everyone else was saying, ‘It’s the last race of the year let’s just get through it.’ I was racing for a championship. It was good to get that 1-1 off the back. I was really pumped on that day, it was much needed and a long time coming.”

But Cooper was far enough back in points by then the pressure was off. Lawrence had to deal with it, and it almost snapped him, with crashes and 8-3 finishes. The 2021 season marked a first-time experience for both Lawrence and Cooper to go this deep into professional title fights. No doubt they will be stronger for it. For Cooper, he simply learned to dig deeper and push harder. He’s always been consistent. He needed to win more races. For a moment, before that crash at Washougal, it looked like he was ready to do that.

“I’m really consistent, I can go off that, but leading a championship, it requires you to go out there and win,” Cooper says.

When it didn’t happen, he didn’t take it easy on himself, nor did his team. Cooper took over the points lead at Millville but only went 2-3 after leading both motos. He and his team weren’t happy with the effort.

“There’s a lot of pressure and there’s no hiding that,” Cooper said. “It’s good pressure, you have to be held accountable when you don’t perform your best. Maybe sometimes you don’t get your best self if you don’t have that pressure there to reinforce it. There’s no getting lazy on this team, that’s all I can say!”

So, after a long break, Cooper gets back at it, with the same goal in 2022 that he had in 2021: win both titles. It will start at Anaheim, with the #1W on his Monster Energy/Star Racing Yamaha YZ250F. After a season dealing with the pressure of trying to win titles, now he gets to see what it’s like to defend it.

Listen to the full interview with Cooper on the Exhaust Podcast in the embedded player below: