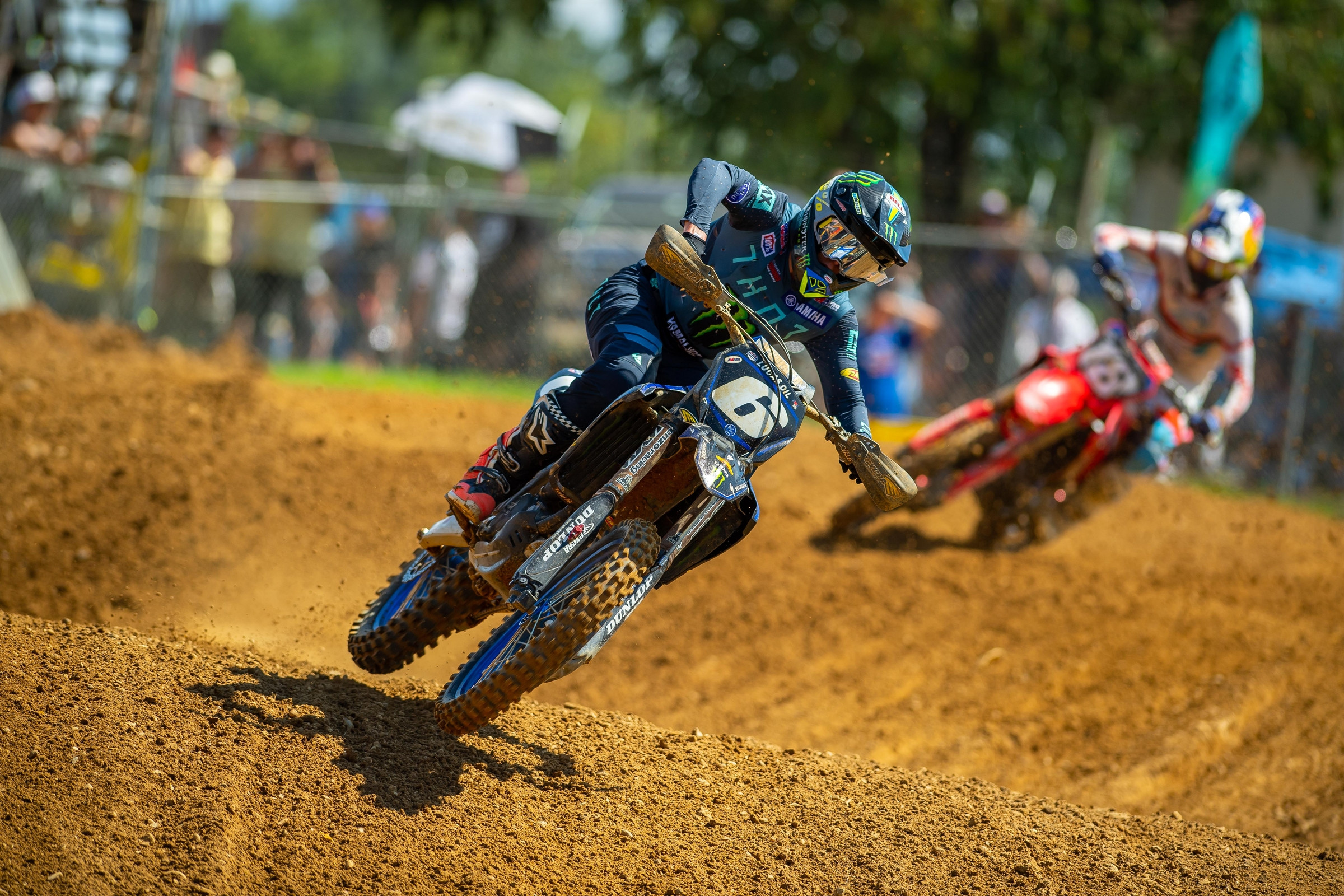 Two-time 250 class Pro Motocross champion Jeremy Martin has himself in an odd situation. He has now won three of the last four rounds, has more wins than anyone else in the class, and is not in the title fight. After an early injury sidelined him for a round and hampered his speed upon return, Martin sits a distant 60 points off the lead with now three rounds to go. As such, he’s now winning races and splitting points with his teammate Justin Cooper and former teammate Jett Lawrence who are just three points apart at the top of the standings. After another win at Budds Creek going 3-1 on the day, Martin discussed his situation and how the day went as a whole with the media via Zoom.

Jeremy, talk about your day. A solid first moto, but kind of a quiet third place. I think everybody was kind of looking at what was going on at the front. You got by into the top three pretty quickly there and then just settled in and then went on the attack. You got the holeshot in moto two and went to work and put the gap out and was able to maintain that. Maybe one of your best rides of the year all in all there in that second moto and the way you were able to control it from start to finish. How do you feel about the day? Championship is maybe not really in the reach, but you’re making it interesting. How does it feel to be kind of the middleman in this battle for the title between your teammate and Jett right now?
Jeremy Martin: I don't know if I really like being the middleman, but it is racing. It is a part of the sport. Obviously, I missed three complete motos this year. Coming into Budds Creek today, I didn’t know how it was going to go. I don't know if I’ve ever won a moto there. I’ve never really jived there pretty well, so to be able to go 3-1… In that first moto, those guys were going good, and Jett just straight up got me around the outside and I had nothing for him. That was that. That was moto one. Then moto two we made some bike adjustments, and I was really a lot more comfortable. I felt like it definitely showed in that second moto. I got a great start and then was able to lead it from start to finish and get the overall and get the third win on the season.

You just talked about making some setting changes in-between motos, and last week your teammate, Justin Cooper, said he should have made some changes that he didn’t. Of course, our boy [Steve] Matthes always says, too much emphasis on settings. What settings do you make that make that much difference? Is it just a click here and there, or is it something more significant?
To be honest, between moto one and moto two it was just a little change to the shock and then one adjustment to the fork, on the bottom of the fork. That’s all it was. From the first practice, I felt not bad, but I was kind of trying to find the setting all day and I rode in to finding the setup for the day, and that was the second moto. Honestly, when you’re at this level, Jett and J-Coop and all the guys are going really fast. Obviously, you guys saw moto one and then moto two I was more comfortable. Settings aren’t everything, but I think it does obviously help, and my second moto proves that.

Since the announcement that you’ll be returning to Star Racing Yamaha for 2022, does that take a bit off your chest that you don’t really feel like you’ve got to go out there and prove everything, put everything on the line to sort of prove that you’re going to be worth the ride for next year? Do you feel a little bit better?
I don't know. To be honest, I’m stoked to have a deal for next year. I didn’t know. I’m happy about that. So, I get to go do what I love for next year and go racing. So, that’s good. Obviously, I do get quite a bit of flack for being in the 250 class for as long as I’ve been in there, so the flack is not really fun to listen or to hear, but I get to do what I love, and the Yamaha is an amazing motorcycle. I enjoy riding it. I get to race some really good guys again, Jett and Cooper next year. I’m looking forward to it.

You mentioned that you just felt like you had unlocked another level there in that second moto and you were on rails. What does it take for you to get there and what’s that feeling that you search for? You can almost see it in you when you ride that you’re feeling it. The corners look different, everything looks different. What’s that feeling?
It’s probably one of the best feelings that I’ve ever felt, to be honest. I always feel that during the week. You hit your lines, you prep the track… I always feel it during the week. So, when you don’t feel it on race day or you haven’t found that feeling yet, I get pretty frustrated sometimes, but things lined up. It’s just cool. You kind of feel like you can go anywhere on the track, and you can haul ass and carry some speed in them turns.

Is that something like today it’s a bike thing for you? Or was it just the lines and everything just gels together as one?
I think it was a combination of both. I learned some good lines off Jett when he went around me. I wasn’t ever close enough to J-Coop in the first moto. So, I learned some lines off Jett and then we just kind of got in the ballpark as far as what I was looking for, and then it was just game on.

You had a response that seemed very specific about a setting or a change to a fork. That seems incredibly specific. I’m just curious, at your level, is that just unique to you at a certain elite level that you’re able to notice or recognize that there’s something missing or needed? It just seems incredibly specific that detail. I’m just curious if you could elaborate a little bit how attuned you are to the bike.
I’m pretty in tune. I think I’m probably one of the more picky guys out there on the track. I can tell a difference between a click softer on high-speed compression or low speed or just rebound adjustment, everything like that. I’ve done so many laps. I used to not be a good tester and I kind of didn’t really know what was out there, and then just through the years of trial and error, hitting the ground, I learned a lot when I went to Honda, too. Learning how to set up a different motorcycle. Different manufacturers need different things to bring out the best of each bike. With coming back to the Yamaha, I obviously kind of knew that window from before. I think with me being a smaller guy, and I don’t have much leverage on the motorcycle, I think I notice more than maybe somebody like Jett who is really a tall guy that can get the leverage over the back but can still keep his head over the front. So, I’m pretty finicky and sensitive to what I want on the motorcycle.

Obviously, the end goal is the championship and like you said, the 450 ride you want. In the meantime, you’re still able to win and you’ve proven that now. You’re climbing up the all-time ranks of the 250 overall wins. Is that something that you pay attention to, and you continue to realize, or as people just telling you about that?
I guess because people have been talking a little bit more about me kind of climbing up in the 250 ranks, I guess I notice it more now. I kind of feel mixed emotions on that. I know I’ve been in the class for a long time, and then with every year that goes on, obviously I’m going higher in the rankings which is cool, but those guys before me, I feel like they definitely crushed it and they were not in the class as long. So, I’m my hardest critic on myself. It’s a cool feeling. I’m not going to lie. But it’s kind of bittersweet.

Like you were stating earlier, you missed various motos earlier in the year. Hypothetically, if you didn’t miss those motos, where do you see yourself in this title fight?
I don't know. I feel like I’d obviously be closer. It’s tough to say. If you were perfect on those three motos, obviously that’s 75 points for grabs. To say that I would have been perfect against Jett and Coop would have been tough. So, I don't know. I’d definitely be closer. I think I’d be in the fight. You always wonder.

Have you spent any time in Florida yet with the team at the GOAT Farm, and do you intend to train there at all next year?
Yeah, absolutely. I intend to train there next year. As of right now, basically since April 14th, I’ve been back in Minnesota training at Millville every day. We have probably five to six tracks within 15, 20 minutes of my parents’ house there at Millville. We’ve got sand. We’ve got obviously the national track Millville. We’ve got a bunch of stuff. I love it up there in the summer. We have our hot days, and we have our cool days. It’s not Florida where it’s a swamp and crazy hot, but I think that’s also an advantage in some ways, too.