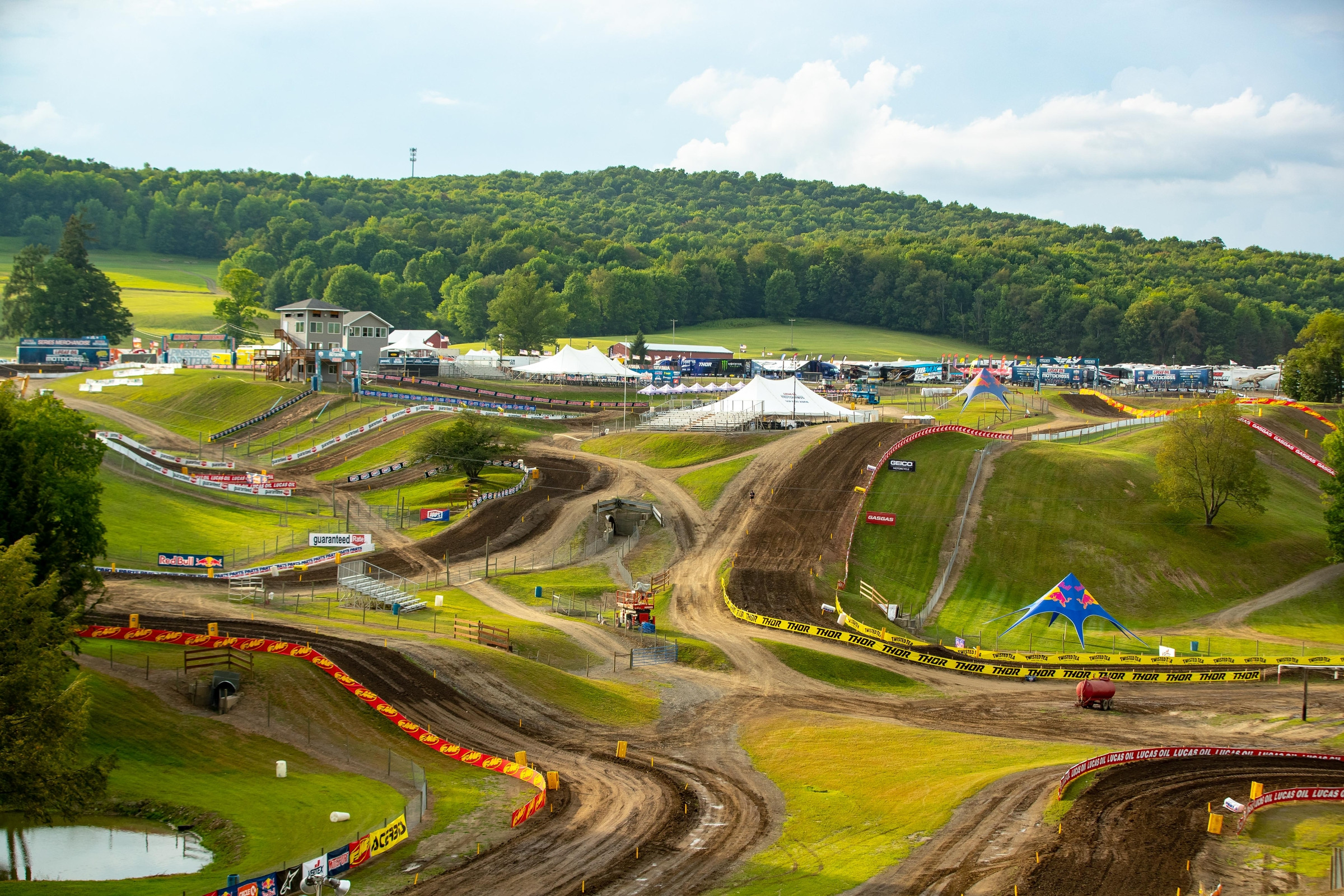 After the longest break the Lucas Oil AMA Pro Championship has seen in several years, we are back in action! The paddock here at Unadilla MX is set and ready for another round, just over two years after the last time the championship was in this historic venue. While the track stays true to how it was in 2019, there are a few changes to the layout—most notably a difference in one of the back sections. Aside from that, riders are anticipating the typical hard, rutted dirt as hand guards were added to several bikes throughout the pits yesterday.

Last night, the track received heavy rain. While the radar is showing possibly passing showers during practice, it does look like we could luck out and have a sunny, dry afternoon with some sun. After temperatures in the low 90s on Friday, this afternoon is expected to be mid- to low-70s. We could luck out and miss the opportunity for this to be a complete mudder like it was here in 2018—let’s hope so.

As far as the action on track, the racing could not be any better. So far we have watched as the 250 Class continued to provide us with close racing and a tight championship. Six different overall winners in seven rounds and now the championship battle is a mere eight points between leader Justin Cooper and second place Jett Lawrence. With five rounds remaining, Cooper and Jett Lawrence are not the only two mathematically able to still win the title, but Hunter Lawrence sits 44 points down in third, Jeremy Martin sits 61 points down in fourth, and RJ Hampshire sits 76 points down in fifth. Honda HRC’s Jett Lawrence had the moment rolling early in the season but he slipped back the last few rounds as the veteran Cooper got the ball rolling. We should be in for another great one today at a historic venue.

A few things to note in the remainder of the field:

-Jalek Swoll is in following a first-turn crash at the Washougal National.

-Garrett Marchbanks underwent an arm pump procedure during the break after the seventh round in order to help his performance. While the procedure is more advanced and requires a shorter recovery than it used, the team said it was successful. Marchbanks has had limited time on the bike since but is still active for today’s race.

-Seth Hammaker is making his return to racing this weekend after he was sidelined with an illness for rounds two through seven. So watch for the #150 to find his footing again.

-Luke Renzland is back in action on his Husqvarna TC 125 so no, it’s not the beer making you think you’re living in the good ol’ days and hearing two-strokes, it’s actually just the #443 on a two-stroke!

- Colt Nichols and Michael Mosiman are both out with separate injuries—Nichols is still nursing and injured shoulder from round seven and Mosiman from a practice crash this week. Sidenote: bummer for fans not to have Nichols in action because you know he would probably throw a Nac Nac or two over the Sky Shot jump.

In the 450 Class, the racing has not been bad, but there has not been as much diversity in terms of results. Rookie Dylan Ferrandis has a commanding 47-point lead over Ken Roczen in the championship, as he has taken four of the seven overall wins this season.

it appears the Frenchman will claim the #1 plate at the end of the season—and history agrees that it could possibly be his title to lose. As Kellen Brauer pointed out recently, in the last 15 years, only three times has the points leader with five rounds remaining not been crowned champion. Ferrandis hopes to claim his first premier class title as two-time Champion Roczen aims to reclaim the #1 plate for himself. Roczen, Eli Tomac, Chase Sexton, and company are in desperate need to slow Ferrandis' roll as soon as possible before the #14 gains a day's worth of points and starts to build a 50-plus point lead. Sexton earned his first win of the season at the last round in Washington and Roczen claimed a victory at round two, but Tomac still searches for his first overall win of the 2021. Could it come today after a refreshing break? We will have to wait and see.

A few things to note in the remainder of the field:

-Justin Barcia is out for this weekend following a practice crash.

-Dominique Thury is making his AMA Motocross debut on a ClubMX Yamaha YZ450F. The German native will be the #464 on the blue front, white rear Yamaha.

-Fredrik Noren (hand) and Alex Ray (wrists) are both out with injuries. Kyle Endriss will fill in for Ray with the SGB Racing/Maxxis/Babbitt’s Kawasaki team aboard a #607 KX450. The SGB crew is also welcoming back Jeremy Smith, who is making his return from a broken collarbone suffered at the second round.

And lastly, just a quick note on the race day schedule/broadcast schedule: the 450 Class motos will be first this weekend, followed by the 250 Class motos. You can view the full TV/streaming broadcast below.

And lastly, while the Unadilla National is typically where the Team USA roster for the Monster Energy FIM Motocross of Nations is announced, the 2021 roster will not be announced this weekend. As Davey Coombs explained in Racerhead #33, Mike Pelletier of the AMA said the announcement would instead come next week at the Budds Creek National.