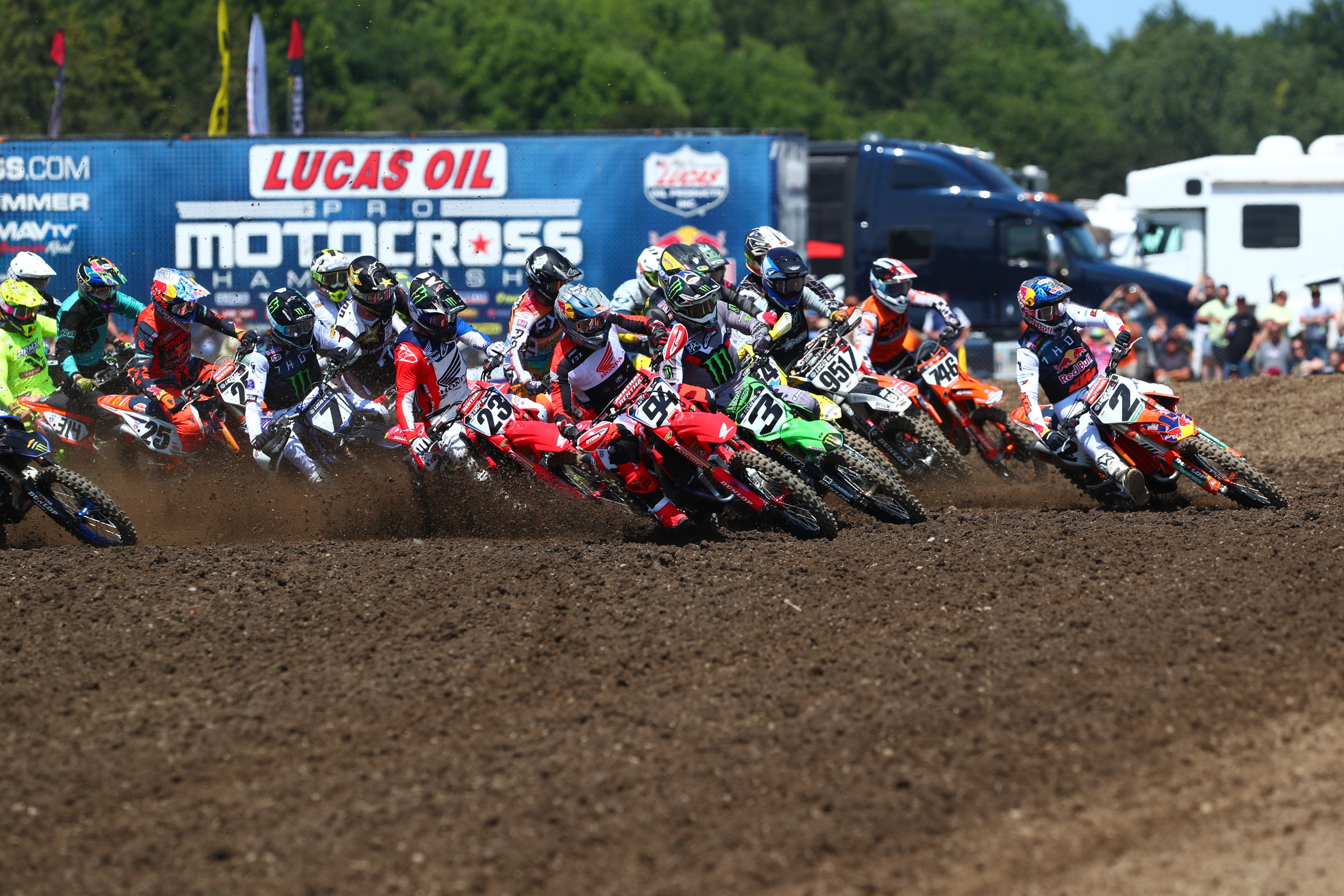 If you missed our morning report for everything leading into today’s race, make sure to check it out. And view the qualifying report as well.

When the gates dropped on the first moto, it was Ken Roczen who picked up right where he left off in qualifying—right out front. The #94 grabbed the holeshot and would lead every lap of the race. Going through the holeshot line his teammate Chase Sexton’s back end swapped back and forth and eventually the #23 slammed down hard in the middle of the pack. He took a minute to get up and going but eventually he finished the moto and managed to push from almost a lap down to finish an incredible 11th place. He held his hands in his head in frustration while the team worked on his bike after the race.

Out front, Roczen had Aaron Plessinger all over him. The #7 kept closing the gap on the leader until he was within striking distance. Unfortunately for Plessinger, his race would end early when he suffered a big get off after crossing the finish line jump, slamming down hard to the New York dirt. He only completed eight laps before he was helped off the track by the medical crew, as officials removed his mangled bike from the track. The initial report from the team is that Plessinger did not suffer any broken bones, but he did hit his head hard and knocked the wind out of himself. At this time, we are unknown if he will lineup for the second moto or not—we will provide an update when we learn more information.

Update: Plessinger is out for the remainder of the day following his crash.

When Plessinger went down, Roczen was given some breathing room as Dylan Ferrandis was over 15 seconds back as he moved to second place. Behind Ferrandis there was an impressive ride by several privateers. Jace Kessler, fresh out of racing from the Loretta Lynn’s Ranch last week, the Yamaha-mounted rider was inside the top five with Justin Bogle, Jeremy Hand, and Coty Schock. Eli Tomac, Cooper Webb, and Marvin Musquin shuffled their way into third through fifth but then Joey Savatgy started to battle with Joey Savatgy. Tomac was aiming to charge at Ferrandis but late in the race he had over a 15-second gap and about just as many lappers between the two. The three-time champion came home in third place. Eventually, Webb would get the better of Savatgy, as the Red Bull KTM rider would claim fifth place behind his teammate Musquin. Kessler would come home 13th in a great ride. Christian Craig finished seventh as Max Anstie rode his way to a solid eighth. Bogle finished tenth but had some great style sending the wall jump going up the hill after the Sky Shot. Where everyone else was scrubbing, Bogle was launching his KTM to the moon before grabbing a handful of throttle to get up the steep hill. Brandon Hartranft scored tenth place and Schock held on for 11th. During the midway point of the race, Shock was charging and his rear end fish-tailed as he was going down the “Screw You” section. It looked like he was not going to save it but he quickly came back up the hill so he must have straightened it out.

Like Roczen, Justin Cooper picked up right where he left off. The #32 grabbed the holeshot and—just like Roczen—went on to lead every lap of the moto. But he had heat all moto long in the form of Honda HRC’s Jett Lawrence and his teammate Jeremy Martin. Jett Lawrence would close up on Cooper but he would put on a heater. Then as Cooper would open the gap, Jett Lawrence would close the gap up and make a push. Martin was trying to stay with the lead duo as he hoped to catch a tow from the #18, but he was not able to get close enough to make a pass attempt of his own. Cooper took the checkered flag as Jett Lawrence claimed second and Martin third.

RJ Hampshire was in the “no-man’s” land in fourth, too far behind Martin to make up ground but far enough ahead of KTM rookie Max Vohland. Vohland was pressured from Hunter Lawrence, who made a pass late in the race. Yamaha’s Levi Kitchen finished 12th as Preston Kilroy finished 16th, and Tommy Rios finished 27th in his first pro moto. Peirce Brown had an awkward crash in the same spot that Plessinger went down after the finish line. He remounted before finishing 29th.

Garrett Marchbanks, who was having issues with his bike during practice where it would take a few tries to start, had issues where his Yamaha was bogging early in the moto. He pulled off and went to the ClubMX pits so the team could work on the bike. Austin Forkner has a crash on the fourth lap, and he went back to the Kawasaki pits to get checked out and worked on. He is expected to lineup for the second moto. TPJ-back riders Derek Kelley and Ramy Alves both exited the moto early as well.