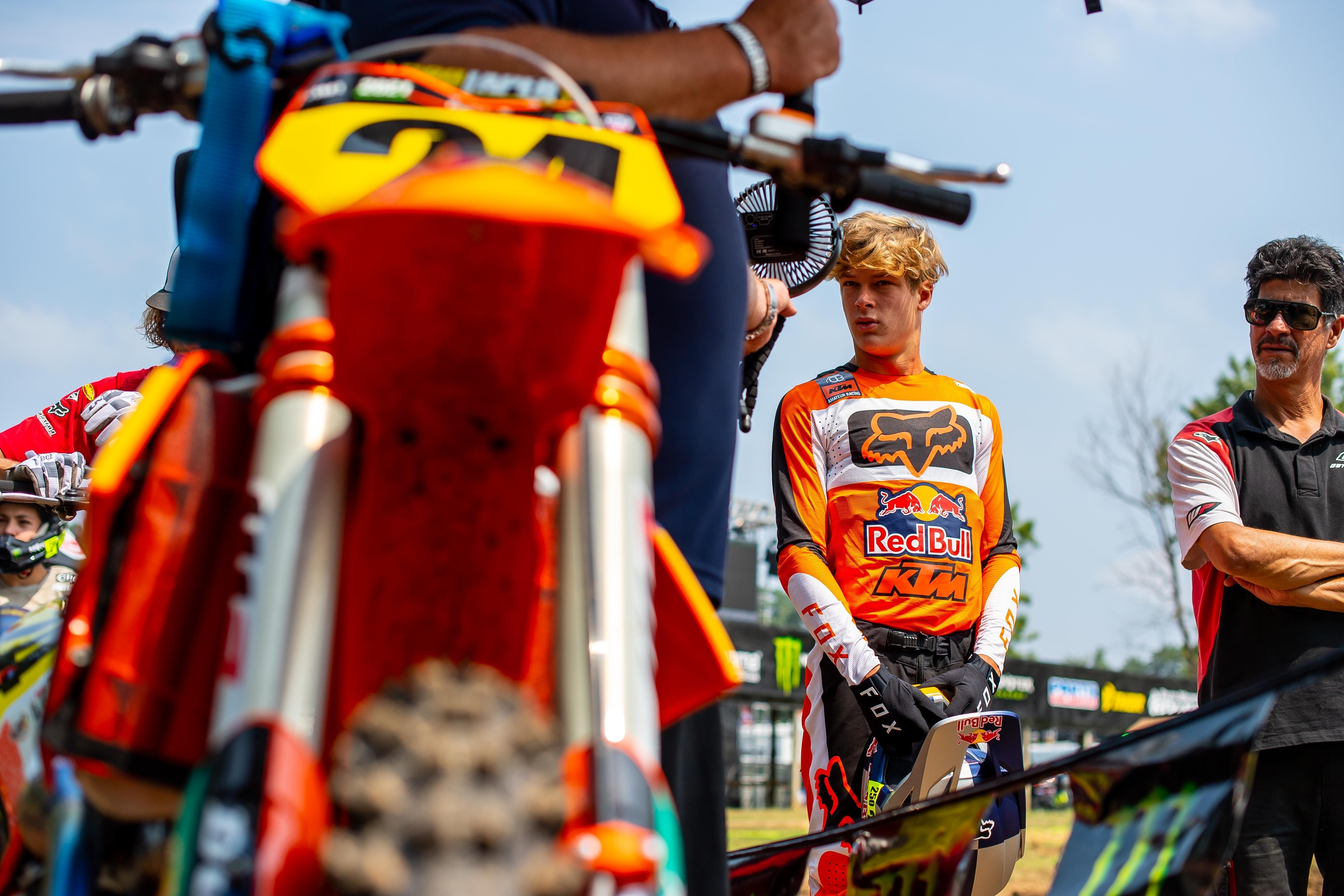 With a dizzying array of classes at an amateur event, it’s probably hard for a fan to even know what to watch. With the Monster Energy AMA Amateur National Motocross Championship at Loretta Lynn’s Ranch beginning tomorrow, we’ll give you this brief scouting guide to what’s coming. However, in full disclosure, I’m not a full-on amateur motocross expert. I only attend two amateur races a year, the Ricky Carmichael Amateur Supercross at Daytona (RCSX) and Loretta’s. The following is based on what I saw at Loretta’s last year as well as industry scuttlebutt. I explain this only to avoid crazy amateur parents who will no doubt be very upset their kid didn’t get mentioned in this story. Hey, we could take the easy way out and just put the entire rider roster from every class right here and hand out nice participation trophies, but the whole point of Loretta’s is to go out and make a name for yourself. (Check out the official rider roster if you have not yet already). This is the week to make people like me look clueless, and then get mentioned in this story next year. If you know of a rider who is ripping coming in, mention them in the comments section below. No wrong answers!

For now, here’s how things are shaping up for Loretta’s. At the end of the week, the whole landscape could look much different.

Sometimes people come to Loretta’s and say, “Well, what’s the main class?” and you already know they don’t quite understand what’s happening. Treating every class the same is a trademark of this event, and sometimes the result in a minicycle class will impact a rider’s life more than anything else. But, if the basis of “the main class” is simply “who is turning pro soonest” then the Pro Sport Divisions (the A classes) are the ones for you.

Here’s something cool: at times there were up to four different A classes at this event, splitting the division into two bike displacement classes and also between those who had raced a few pro races (Pro Sport Class) and those who had not (A class). Now everyone is crammed together—if you’re an A rider, 250 Pro Sport, and 450 Pro Sport are the only options. All the big names in the same classes. No hiding. Let’s dig into some of the stories from the class where riders will turn pro the soonest.

Kitchen Cooking: Last year’s B and Schoolboy 2 (250F) classes were some of the most stacked ever, and yet the real accolades from Loretta’s went to a rider who didn’t race those classes. Levi Kitchen raced the two Limited B classes (for bikes with fewer modifications) and dominated all six of his motos. Could he win against the other hot prospects in those B and Schoolboy modified classes? Apparently, he did throughout the rest of the amateur calendar, including races like the Mini Olympics and The JS7 Spring Classic at Freestone. Next thing you know Kitchen is sitting on a Monster Energy/Star Yamaha Racing machine and will probably have the most eyes on him this week.

Bummer news for his Star teammate Matthew LeBlanc, who won 250 B and 450 B last year but hurt his hand a few weeks ago and is out for Loretta’s.

Return of the Jett: Jett Reynolds was once the biggest name in amateur moto, absolutely dominating the minicycle ranks for Kawasaki Team Green. He won a whopping nine-straight titles at the Ranch, winning every title he raced for except one between 2013 and 2017. People were already doing the math to see if Reynolds, part of the Bakersfield, California talent pack, would break the James Stewart/Mike Alessi/Adam Cianciarulo tie of 11 Loretta’s championships through the mini and amateur ranks (Vet rider Kevin Walker holds the all-time Loretta’s title record). Then the injuries started coming for Jett, and they wouldn’t stop, until he missed the event outright in 2018 and 2019. He was banged up coming into the 2020 event and rode his heart out, but another big crash in the Ten Commandments ruined his title bid. Reynolds is now in the A classes, and no one would have guessed by the time he was there he wouldn’t be the absolute most-hyped name in the amateur game. But, adversity builds character. Can Reynolds get his Loretta’s mojo back this week in Pro Sport?

Take a Chance: Chance Hymas jumped into the league of the big names last year by winning the Schoolboy 2 (250F) Championship, now he’s in the A class and is highly sought after by several teams. He turned 16 in May so he might have another year in the amateurs before he goes pro, but once Kitchen and others graduate, he might be the next guy to watch.

Too Many to List: This week, Cullin Park doesn’t expect to do much of what his last name says. Instead, he will look to take his Phoenix Racing Honda CRF250R to battle in the 250 Pro Sport and Open Pro Sport Classes. Hunter Yoder, Luke Kalaitzian, Jack Chambers, Jace Kessler, Kaeden Amerine, Austin Black, Preston Kilroy, and more will look to wedge themselves as high as possible on the results pages as well. There will be a few former pro racers in action with the top amateurs as well, as Brandon Scharer (who trains riders at ClubMX and actually raced three rounds of the Lucas Oil AMA Pro Motocross Championship with the team) will compete in the 250 Pro Sport and Open Pro Sport classes, the latter where he will be joined by New England favorite, long-time Pro Motocross racer Robby Marshall and former SX/MX racer Heath Harrison, who now works within the Phoenix Racing Honda program.

There are tons of other fast kids in Pro Sport—the whole point here is that they one have last chance to upset the “chosen ones” and make a name for themselves.

Check out the RacerTV.com broadcast schedule below.

We’ve seen a recent change in amateur racing where riders who maybe didn’t stick out on minicycles suddenly go next level when they get onto big bikes. Hence, the B and Schoolboy classes are often where the real talent shines and sets the tone for the future. That happened last year via great performances by Kitchen and Hymas, who really changed their profile with Loretta’s wins. This year’s B class features some established players who have already won titles (see the two names below) but hanging in the balance is a chance for others to bust out. Who will it be in B?

romano Returns: Nick Romano was right in there with older kids in the B classes last year, but a few bad motos kept him from title contention. He’s still in that division on his Star Yamaha, so he will be a player. He’s entered in 250 B and Schoolboy 2. When you’re already fast enough to podium in B but come back even older and stronger a year later, you’re going to be tough to beat.

Bennick In B: Daxton Bennick used to be the minicycle mirror-image of Haiden Deegan, as those two buddies battled all the time. Then Daxton hit a huge growth spurt and found himself on big bikes quickly. He rode well as a B rider last year but couldn’t match the much-older Levi Kitchen. Like Romano, he’s back for another year, and racing 250 B and Schoolboy 2.

GT Money: Gavin Towers is another Team Green prospect. Kawasaki isn’t backing as many kids as it used to, so that means those on the green bikes are expected to be at the sharp end of the field. Towers, of Pennsylvania, is in 250 B and Schoolboy 2. Just like last year, those really are two must-watch classes.

Hunting Hawkins: Talon Hawkins, on Rockster Energy Husqvarna equipment, needs a mention here as well as he will be racing the 250 B and Schoolboy 2 (12-17) B/C classes. He has been fast since he jumped to the four-stroke FC 250 and would like to add his name into the title conversation early in the week.

gauging Linville: Gage Linville jumped from a KTM 250 SX-F to a Rock River Yamaha YZ250F in the fall of 2020 right before he went out and won several classes at the Mini O’s in Florida. How will the #40 fair against some of the top-level names on his new ride? The Georgia native will be racing in the 250 B (with the names mentioned above) and in the 250 B Limited class.

It’s cool that some brands recognize the 125 class as a way to continue the development of talent. Last year, KTM had Max Vohland playing the long game and winning on his 125…he wasn’t expected to get scooped into the pros so quickly, but KTM’s factory team had an opening. Anyway, Evan Ferry was underrated fast at Loretta’s last year (he was second quite often to Loretta’s master Ryder Difrancesco, who is out this year with injury). Evan will bring his Rockstar Energy Husqvarna into the 125 Schoolboy and 125 B/C divisions. That’s where his teammate Jalek Swoll was a few years ago and Swoll went on to win the AMA Nicky Hayden Horizon Award a few years later. Another kid to watch is Indiana’s Mark Fineis who is said to be finding a new level this year.

The Best: With any luck we’ll be making puns about Logan Best winning—and thus, being the best—for years. Logan is a Yamaha BluCru rider who was second to Haiden Deegan in Mini Sr. last year, and now is YZ125 mounted. He’s in the same classes as Ferry and many other talented kids. Good to see Yamaha also recognizing this as a class to develop riders. Should be some great racing to watch on the tiddlers.

The Deegan Factor: Okay, onto the minicycles, and Supermini, which must be mentioned because that’s where Haiden Deegan is racing. Deegan is of course very famous and popular, but at the core of this story is the fact that Haiden is just a very good dirt bike racer. But when someone is good and popular, that inspires others to try to beat them. Plus, minicycle rivalries are a tradition!

CAsey’s Turn: If you’re looking for someone to challenge Deegan, Casey Cochran, now with GasGas, is definitely fast and has won plenty of races. He was a Suzuki kid last year, but he’s been ripping in red lately. You know every kid on that Supermini gate knows a win this year would really help push them to another level. That’s the whole point of this event. Established riders building their legacy as amateurs, and a determined pack trying to beat them. We’ll see how it turns out in 2021, starting on Tuesday.

Run it Back: Drew Adams is probably wishing he could redo the 2020 event. He finished second overall in the 85cc (10-12) Limited class (3-2-1 finishes) but he ran into some issues in the first 85cc (10-12) moto when he had a bike problem and DNF’d. It cost him a shot at the overall win, as even after a fourth and a win in the second and third motos he finished 12th overall. This year, Adams will be back in the 85cc (10-12) looking for revenge. Adams will have strong competition in that class in the form of Seth Dennis, Deacon Denno, and Canyon Richards—all of who could claim moto wins. The Team Green Kawasaki rider will also compete in the Mini Sr 1 (12-14) class.

Main Image: Daxton Bennick during practice for the 2021 event, photo by Align Media