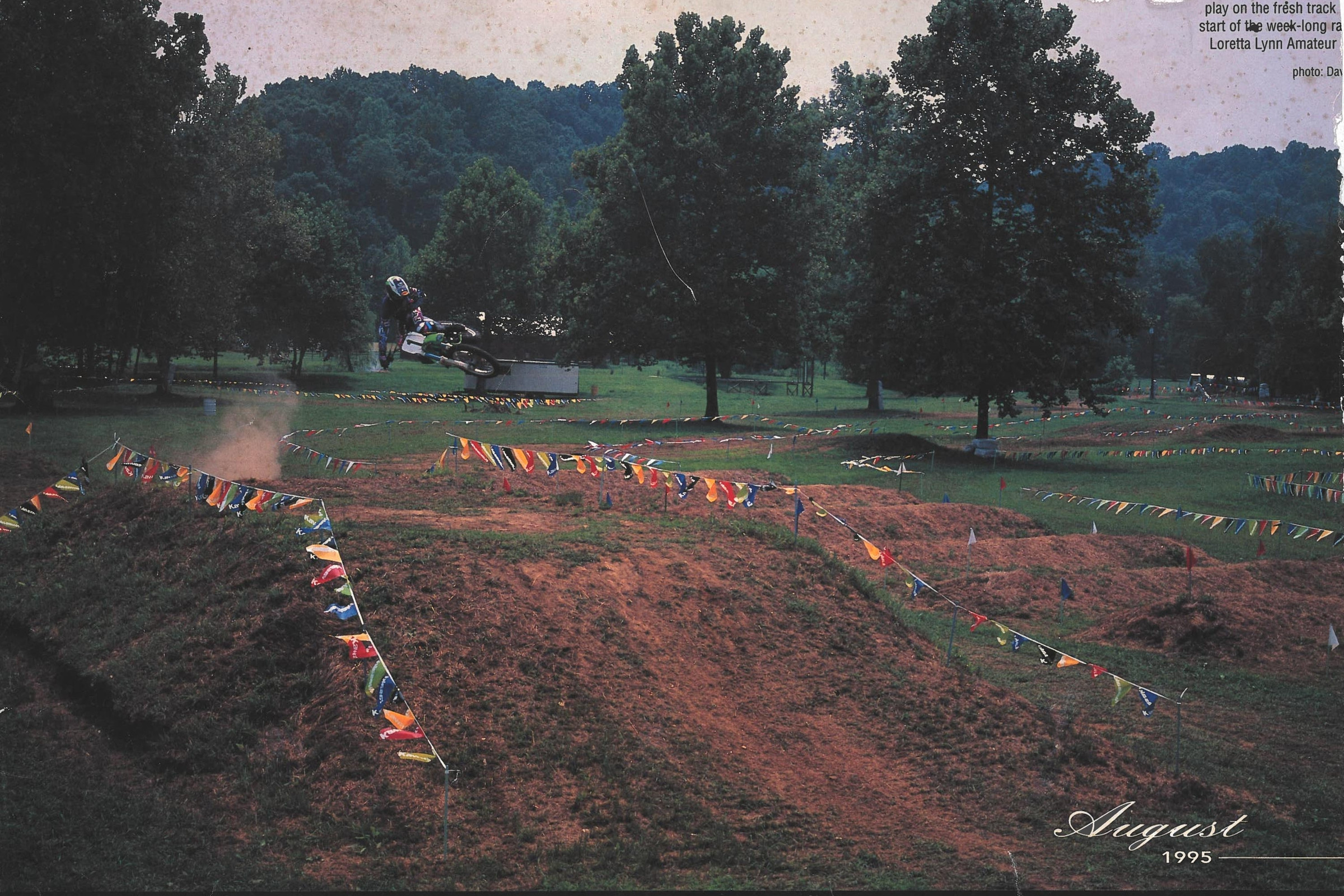 One of the founding principles of the Loretta Lynn’s AMA Amateur National Motocross Championship is the fact that the track is as neutral as can be. It is completely off-limits for each of the other 51 weeks of the year. You can’t rent it. You can’t have a motocross school there. You can’t ride there for any reason. The idea is to have an even playing field, where no one has an advantage over anyone else because they live nearby or can frequent the track (or they can afford to rent it). When the races are over, the gates are locked and the grass is replanted. The track just sits for the rest of the year.

But there was one time when Big Dave Coombs—my dad—made an exception. In 1992 and ’93, Pete Fox of Fox Racing was doing a “Dream On” advertising campaign for all of the big magazines. He would take Fox Racing riders like Robbie Reynard and Ezra Lusk and shoot them out riding by themselves at places like the old Hollister USGP track in California, or the beachside track at the Costa Club in Acapulco, Mexico. The idea was to show an amazing, off-limits track and a single rider out there riding alone, in some kind of dream session. That in turn would get the reader thinking and dreaming about what it would be like for him or her to be in such a lucky position.

I was an aspiring photographer in July of 1993 and really wanted to get one of the Dream On shots, but where? I first thought of Unadilla, which back then was still all grass before the USGP or Pro Motocross race came to town, but they had just run their national and the grass was all gone. Then I remembered Loretta Lynn’s, where I was headed in a couple of weeks to help work on the track. I begged my dad to let me get out there on the track with a rider for just a few minutes to get a shot on the big tabletop, then the centerpiece of the track. At first he said no—it wouldn’t be fair to let one rider out there for a practice session—so I kept insisting how cool it would be to have the track featured in this really popular advertising campaign. He finally said okay, but with some stipulations: we could only use the one jump for the shoot, I had to cut the grass and put up banners around the whole track and make it look nice, and we had to do it at least a full week before the actual race so no one else would see it.

The next challenge was finding a rider, but that was easier than I thought. My good friend and riding buddy Davey Yezek, then a 16-year-old Pro-Am rider from Pennsylvania, just happened to be a Fox Racing rider and of Kawasaki Team Green’s top prospects that year. He had already qualified for Loretta Lynn’s ’93 in the 125 A Modified and 250/Open A Modified classes, so he was already going. He loved the idea, but his parents hated the fact that he would have to get there an entire week before the race. But they finally said yes.

And then there was Fox Racing themselves—were they even interested in this kind of shot? Turns out Pete was into the idea but they wanted Yezek to wear their brand-new gear, so longtime team manager Todd Hicks was sent to Loretta Lynn’s early with a gear bag full of new swag.

On the Monday before the Monday of practice—one full week—Yezek, Hicks, and I all met at Loretta Lynn’s Ranch at Hurricane Mills, Tennessee. Big Dave was already there, and the grass had already been cut by the Ranch, so we spent the morning putting up the old pennant-style banners that used to line most motocross tracks. Once we were done, Yezek unloaded his bike while Hicks pulled out the big gear bag. At that point Big Dave laughed and said, “You’re not going to have time to change outfits—I’m only giving you guys five minutes to get this shot.”

Talk about pressure! I grabbed my camera and loaded it with 35mm Fuji chrome film while Hicks picked out a gear set and Yezek got dressed. We opened the gate and Davey rode straight out to the start of the middle straightaway and took one practice leap on the tabletop. I got into place on what is basically now the tunnel jump by the starting line and gave Yezek the thumbs up. He turned around and hit the jump on his KX250, whipped the bike sideways, and turned around and did it again, maybe three times. And that was it. I would have to wait to get the roll of film developed in Nashville to see if we got the shot. In the meantime, Big Dave had one other chore for me and Yezek and Hicks: we had to take all the banners down so they could start hauling in sand!

Yezek and Hicks both stayed in Hurricane Mills all week and were kind enough to volunteer to help us work on the track and get everything ready. We put in days of work out there, picking rocks, putting up hay bales, mowing, weed-eating, and then finally re-bannering the whole track. When Yezek finally got out there on the track for real with everyone else, he promptly won the first 125 A Modified moto over fellow Fox Racing rider Scott Sheak from New York. I remember being worried that someone might say something about Yezek having been out there a week earlier, but the issue was never raised. I also remember thinking that any track advantage he had going into that first moto was not from the four times he did the tabletop, but rather from the week of volunteer work he’d put in out there. It became a moot point when Sheak ended up winning the rest of their motos together that week, Yezek finishing a close second every single time. (Finishing third in the 125 A Modified was Brian Deegan.)

As for the photo I was aiming for, we pretty much got it, though the grass was not grown in on the actual track as much as I’d hoped. But Pete Fox liked it enough to use it for a magazine spread as well as the August shot in their 1995 Fox Racing calendar. I think I got paid $150 for the shot—hardly worth a week of hard work at Loretta Lynn’s—but in both Davey Yezek and Todd Hicks, who hung out all week long after that five-minute photo shoot and helped work on the track, I found lifelong friends.

Davey Yezek died in November 2019, after suffering kidney and liver failure. When we went to the celebration of life they had for him in Mt. Pleasant, Pennsylvania, his mother, Mary, put the “Dream On” photo of Davey—the one photo shoot ever allowed on the Loretta Lynn’s track—on display in a glass picture frame. If the photo shoot and the week of work weren’t really worth it back in 1993, it sure was now.