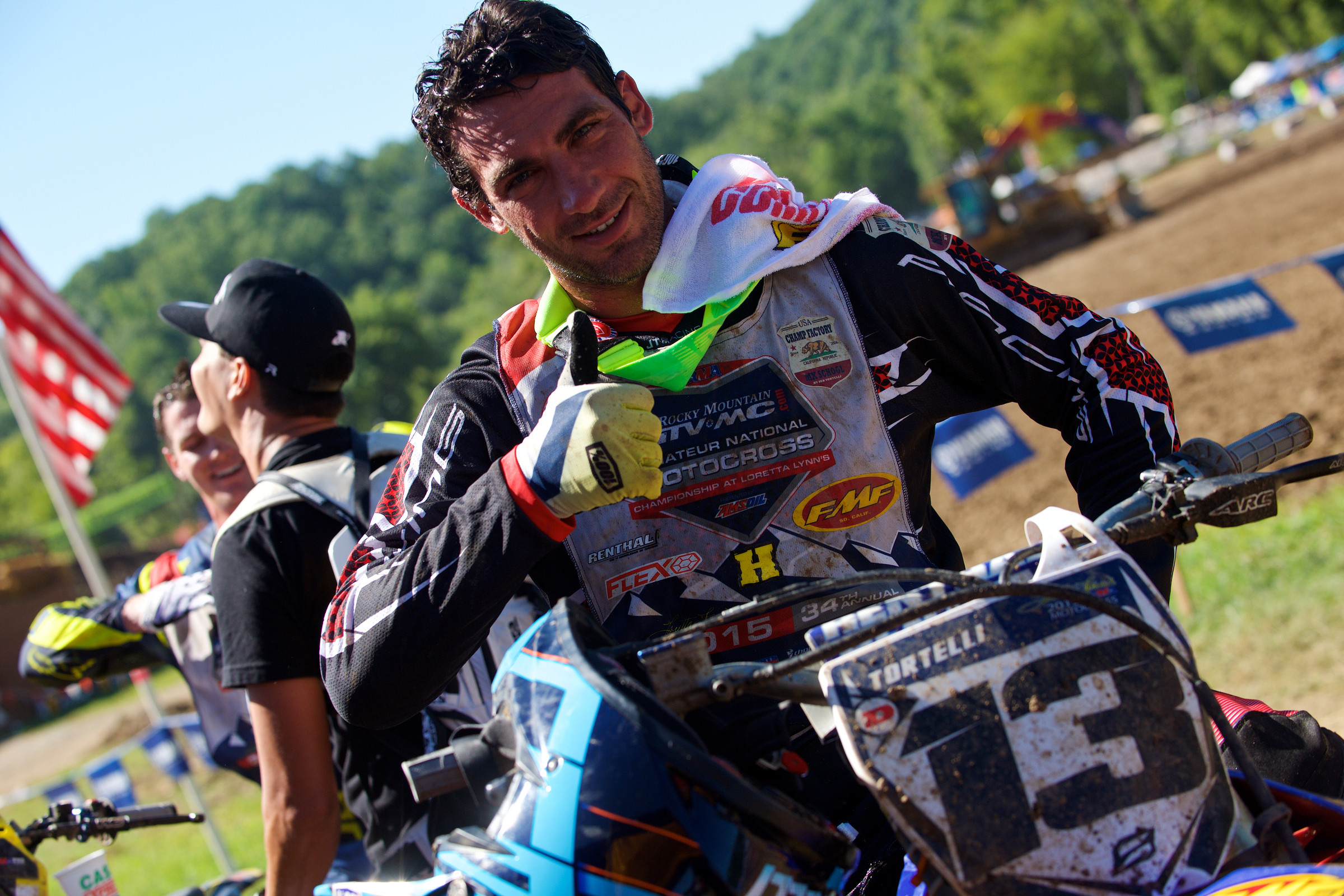 30 Stories From The Ranch When Ex-Pros Return

Ever since Day One at the Loretta Lynn’s AMA Amateur National Motocross Championship, at least one senior/vet class has been open to former professional riders. And as you can imagine, it’s been a point of controversy ever since. Some will argue that once you are a card-carrying AMA Pro Motocrosser, you are always a pro—leave the amateur races to true amateurs. Others will counter that most people hold a pro license for two years at most, and half never actually make it into an AMA Pro Motocross national or AMA Supercross main event. Once they drop their pro card, where else can they race except for amateur events? The only AMA Pro Motocross–sanctioned events are the 12 rounds of the Lucas Oil AMA Pro Motocross Championship, and that’s a tall order for any rider of a certain age, unless you’re John Dowd (and it’s been a few years since his last try).

Over the years, we’ve seen a steady stream of ex-pros who still ride and race and want to race Loretta Lynn’s like they did when they were kids, only this time they’re bringing their own kids as well. They’re allowed to ride in the Junior +25 class as well as the +45 and +50 classes. Off-limits to ex-pros are the Vet +30 Sportsmen and Senior +40 Sportsman classes.

The first ex-pro to enter the amateur national was Barry Higgins, who finished 11th in the Senior +30 class in 1982. Higgins, who hailed from New York but had moved to Georgia, was the winner of the first two AMA Pro Motocross races ever held, the ’72 Road Atlanta National and the ’72 Memphis National. I can’t remember anyone complaining about Higgins riding that class, but Loretta Lynn’s was a little more relaxed back then, especially the vet class.

By the way, the winner of the Senior class in both ’82 and ’83 was a man named Gordon Bowden, who was actually an Irishman who won national titles back home before emigrating to the Gastonia, North Carolina.

The first real “superstar” to show up as an ex-pro and enter Loretta Lynn’s was Pennsylvania’s Tony DiStefano, the three-time AMA 250 National Motocross Champion (1975–’77). But Tony D. found out something that’s become a big part of Loretta Lynn’s folklore: no matter how good you were as a professional, when you come back here and try again as vet rider, chances are you’re going to get beat by someone you’ve probably never heard of! In Tony D’s case, he was beaten in all three motos by South Carolina playground legend Robbie Neeley, a multi-time champion here. Neeley did have a pro license, but only for two years. He qualified for AMA Pro Motocross races, finishing 23rd in both of them.

In 1988, another superstar came for the one and only time: Mark Barnett, the three-time AMA 125 Pro Motocross Champion and ’81 AMA Supercross Champion. He won all three of his motos handily.

Others big names would follow, with varying degrees of success: Marty Smith, Kenny Keylon, Kevin Foley, Billy Liles, Denny Swartz, Andy Stacy, Trampas Parker, and all the way through to Jeff Emig, who came back in 2002, two years after he was forced to retire from his AMA Motorcycle Hall of Fame career due to injuries. Emig found out exactly what many of the other old pros found out upon coming back here; his nemesis was all-time amateur vet winner Kevin Walker from Penhook, Virginia, who also had a cup of coffee as a pro, racing in a handful of nationals and 125 SX races in the early ’90s. Emig did get some titles, but it was a little humbling battling with Kevin Walker when you were used to battling with Jeremy McGrath.

Ricky Carmichael has come back, as has Tim Ferry, Scott Sheak, Nathan Ramsey, and Buddy Antunez, and this year we’re going to see Emig again, as well as Ryan Hughes, Mike Brown, and the ageless Kurt Nicoll, one of Great Britain’s all-time best riders, but someone who has never been here before and has no idea what to expect. He may be in for a few surprises.

Which brings me to two of my favorite stories about ex-pro riders trying the Vet class here. In 2015, Sebastien Tortelli, two-time FIM Motocross World Champion, came to Loretta Lynn’s for the first time in Junior +25 and Senior +40 (before it became a Sportsman class). I warned him before the race to be ready for a muddy moto, a hot moto, and not to be surprised if he loses to someone he’s never heard of. Tortelli did just fine in the +40 class, winning the title, but in the Junior +25 class he lost to Florida’s Ricky Renner. When I saw Seb afterward, he said he was a little surprised to lose in all three motos, but at least he’d heard of “Renner, the guy who always wins Step-Up at the X Games.” I said no, he’s thinking of Ronnie Renner who always wins the X Games. This is his little brother Ricky.

The very next year, 2016, Michael Byrne, the Australian who had a long AMA Supercross/Pro Motocross career and now manages the Rocky Mountain ATV/MC/KTM-WPS team, decided to come back and race Junior +25 just like Tortelli did. He asked me what to expect, as he had never raced here as a kid. I told him those same three things: one muddy race, one hot race, and loss to someone you’ve never heard of. Byrner laughed and said, “We’ll see.”

At the end of the week, I ran into Byrne near the My Laps scoring trailer and asked him how it was going. He just shook his head and said, “My first moto was a muddy mess, my second one was a scorcher, but I finally won my last moto … and I have no idea who the winner is.” In a Junior +25 class that included not only Michael Byrne but Robbie Reynard, Austin Stroupe, Barry Carsten, Jim Polvony, and more, the overall winner was someone named Michael Stryker from New Paltz, New York.