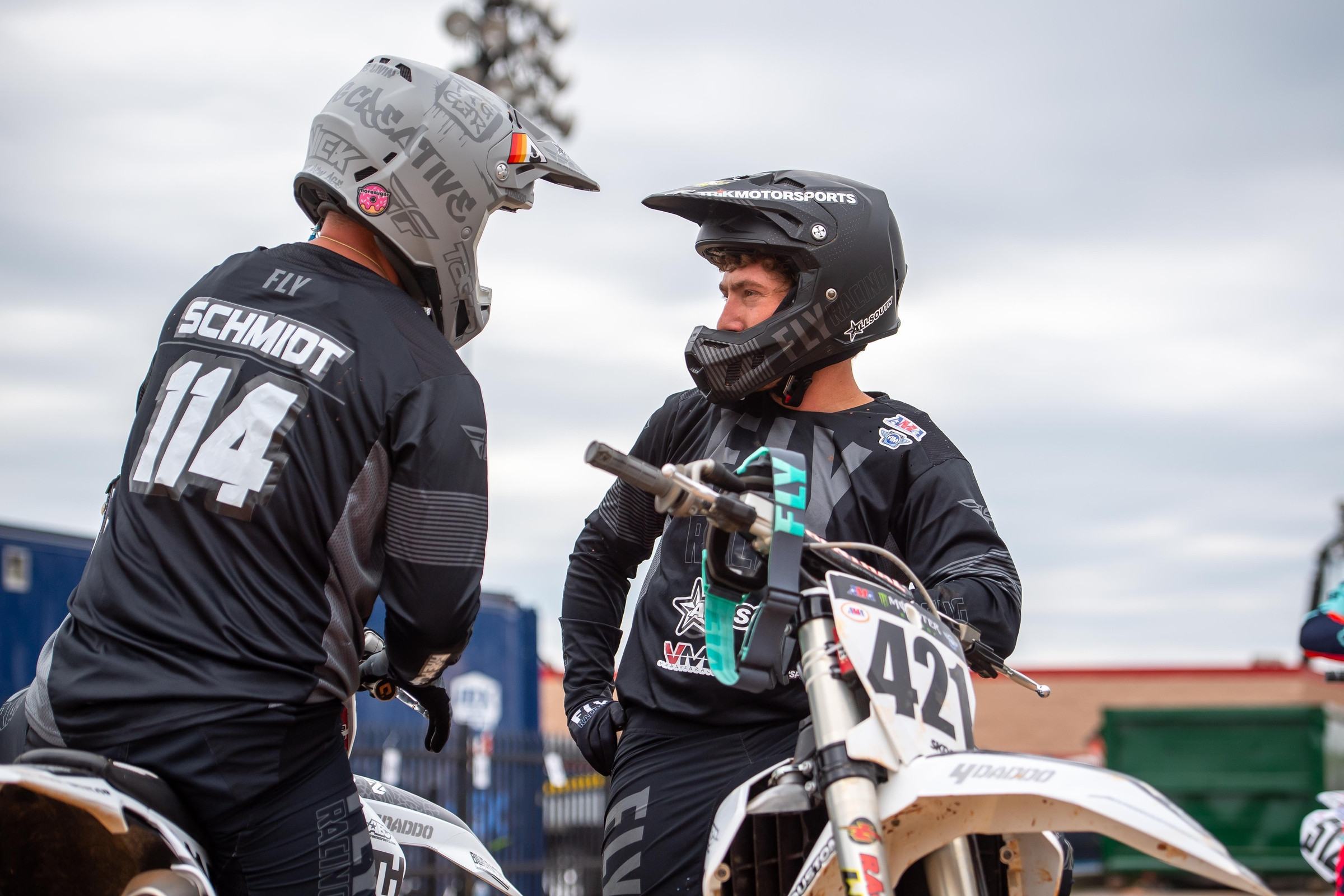 Privateer Weege and Matthes on the Privateer Teams, Part 3

Welcome to part three of the privateer team sweepstakes! The privateer ranks present competition of a different sort. These guys aren’t battling for race wins and titles like Ken Roczen and Cooper Webb, but they have their own goals. The riders want to make mains, make money, and get noticed… perhaps by a factory team. Then, the teams themselves would also like to get noticed by the factories. They would welcome more support, and since other former privateer units have graduated to factory status, such an upgrade is not impossible.

Our Steve Matthes and Jason Weigandt have been running down some thoughts on each team. This is Part 3 of our look, check out Part 1 and Part 2 as well.

Weege: It’s not what it once was, but it’s still cool to see some yellow out there on the track. On that note, it seemed like Bar-X Suzuki RM-Z250s were all over the place at Atlanta, as this squad put three kids into battle with Cantrell, Schwartz and Drake. I know it’s easy to pick on Suzuki these days, but I have high hopes for this team. Schwartz always mixed it up with the fastest kids at Loretta’s, and I still think Larry Brooks (the team manager) knows how to get the max out of a race team. Cantrell and Drake were once first-round draft pick types, with factory amateur rides through KTM and TLD. Neither reached the expected heights, and you know how it goes from there Steve: the teams will back you so hard for so long, and then, suddenly, you’re done.

It hasn’t gone so well in the squad’s jump into supercross. Drake might not have made a big splash in his TLD tenure, but I’d say he was better than most remember during the nationals last year. He was battling inside the top ten a lot and that’s legit. It’s been rough since, as he broke his femur badly while moving onto the Suzuki. Drake is a great personality, and it was great to see him back racing again in Atlanta, but that injury was nasty. Please don’t judge him yet.

Cantrell was building a nice comeback story after just about walking away from the sport, but then Bar-X called… and then he broke his collarbone. He finally got it into a main at Atlanta 3. Schwartz has speed but he’s a bit “sendy” out there and Atlanta was inconsistent for him. He ended it with a ninth, though.

On the other coast, this team sent John Short into battle. A long time privateer guy, this was the first time we've seen Short on a higher-profile team, although I think this squad was still hastily getting things together to be ready for the early races in Houston. Short is like a Chiz, he's not flashy but never gives up. Short's gonna Short!

Overall, I think this team and these riders can make the RM-Z250 look better than expected. By the way, this is an in-betweener team on the privateer level. They do get help from Suzuki but are not considered full factory like the old Suzuki teams.

Steve: Yeah, Brooks is back! LB manages this Suzuki team and although he’s a bit calmer and out of the limelight than he used to be, you know that these kids can benefit from his intensity. I’m all in on Schwartz, his rides last summer were pretty legit in the nationals, he is a bit loose as Weege says but I think he’s got the ability to become something. Drake I don’t know too well, and you have to feel for him, two injury years on factory equipment and now he’s trying to get back there. Perhaps both Drake and Cantrell would’ve benefitted from coming into lower pressure situations and had more appropriate backing for their skills, I don’t know for sure but both guys were a big swing and miss for KTM there. Look, TROLL TRAIN won a moto on an RM-Z last year and although he’s pretty much superhuman, I got to think these bikes aren’t that bad.

Bryson Gardner (out for season with fractures in back and pelvis)

Steve: Both Gardner brothers are good with Carlen seemingly being on the verge of every 450SX main event the last couple of years. Too bad he got hurt, he would be a front runner for my Yamaha LCQ challenge cash, no doubt about it. Also, Cade Clason and Alex Ray along with mechanic Derek Jericho Rankin (who is now Christian Craig’s wrench) are Team BWR alums which is cool.

Weege: Bryson Gardner had some gnarly injuries and hasn’t raced this year. It is not fun to read inferior pubic fracture in his pelvis every week in our injury report. Carlen is missed, also, because he was right in that Clason/ARay bubble group, and we all love those 450 LCQ battles. Please give us some rematches next year.

As for Wilson Fleming, he is the epitome of a make or break fantasy guy. Fantasy is the best and worst of worlds for privateers. They get all this hate if they don't make mains, but without fantasy, most of the fans wouldn't even know their name. In 250SX East, Fleming knows what he's doing and can make some points, but there are never guarantees on privateer island.

Weege: I will admit I don’t know everything about this team, but I think they’re Texas-based and hence they support some riders from that area. “Thurman Curren” has great hair, and the Race Day Live cameras just can’t stay away from him during practice. He’s a main event bubble guy in 250SX East so you’d better watch those Race Day Live shots closely before you select your team. “Vann Man” is cool, he’s been beat up quite a bit through the years but is still out living a bit of the supercross dream. Similar for Schmidt. I think his best years are behind him (he was a Chiz-style always make the main guy for a while) but it’s cool to see him out there still. We don’t get to go to the pits so much during COVID times, but these guys always seem to be having a good time when you walk by.

Steve: Love me some Vann Martin, he’s the epitome of the privateer guy just grinding away out there. He’s also overcome some bad injuries along the way. “Thurman” I feel has lost a bit from last year, not sure why or what but hopefully he can get it back. Maybe cutting his hair would help like Thor (Weege will NOT get this reference BTW). The story behind this team is pretty cool, the original team owner passed away and his daughter took up the reigns to continue helping racers out because that’s what her dad would’ve wanted. I’m here for Team All-South!

Steve: I don’t even know where to go with team owner Ted Parks. I mean, there’s this one time that he told us… wait, I can’t talk about that. Then there’s the time he said…nope, I we can’t let that get out, either. Anyway, yeah, Kevin Moranz! The Kansan has been a very solid privateer for a couple of years and has a strong hustle side as well. He jumped to 450SX after his coast ended and despite me giving him ZERO chance to make a main, he’s used his great starting ability to actually make several of them. This is awesome, he’s a good rider and I’m sure Ted Parks is over at KTM talking to DeCoster to get Kevin a factory bike at every race. Ted will say anything to anyone!

Weege: Indeed, Ted Parks is one of the wildest characters in the pits. If you Wikipedia the state of Texas, I think they just show a photo of Ted. He’s the classic cowboy hat, cowboy boots, no non-sense tough talking Texan, well, except when you get into some nonsense with him. Sometimes I’ll find GL hanging in Teddy’s bus during the nationals. Can you say, “Good times?”

Teddy used to host like 50 riders a weekend but are we just down to Moranz now? If so, he’s a good rep because Kevin really knows how to work the social media, marketing and sponsorship game. Really nice kid. Unfortunately, he had a scary one in Atlanta and I think his supercross season is done. What about those starts? What the heck was going on there? He was holeshotting 450 heats on a stock 2019 KTM!? I don’t know. Maybe I need to go hang out with Ted Parks some more and find out.

Weege: There was a time when Politelli was a real prospect on the verge of something big, I think even our man Jason Thomas was singing his praises for a while. He’d show up at nationals in California and get well into the top ten. Red Bull KTM even gave him a look at Monster Energy Cup once. Now he’s into 450 money-maker guy, I bet he gets enough from night shows and making some mains to keep the career going. He had an ugly crash earlier in the year though and has been out for a bit. As for HRT, I feel like this team has been around forever.

Steve: Yeah, HRT had Matt Lemoine for a while, I think they had a Jimmy Albertson around for a bit, they merged with some teams at some point, and I can’t keep it all straight. But props to them for continuing to support the sport. Politelli, just like Weege said, was at one time very legit and up and coming. Injuries and whatever else has stopped that from becoming a reality but he certainly has some speed here and there and can sneak into a main.

Weege: Steve, I know you don’t know much about this team because they have moved up from the amateur ranks. However, there are two things you do know: Saultz is trained by the great Tim Ferry and they’re backed by Buca di Pepo. I believe Saultz’ dad is the CEO there or something. When the pits open back up, you can guarantee Rides Unlimited will mean Lunch Unlimited for me.

Geistler is the son of the team owner, Greg, and in the amateur ranks we called this squad “the richest team in motocross” because their set up was factory-level in look. Heck, they bought the old RCH semi and pit out of it at Loretta’s! Geistler is also as tall as Benny Bloss. No joke. I saw them standing next to each other at Daytona. Both of these kids are brand-new to the pros, we’ll see how good they are at supercross in a year or two and then we’ll see what this team is all about.

Steve: I know I like pasta and I like Timmy Ferry so I’m pro Team Rides Unlimited!