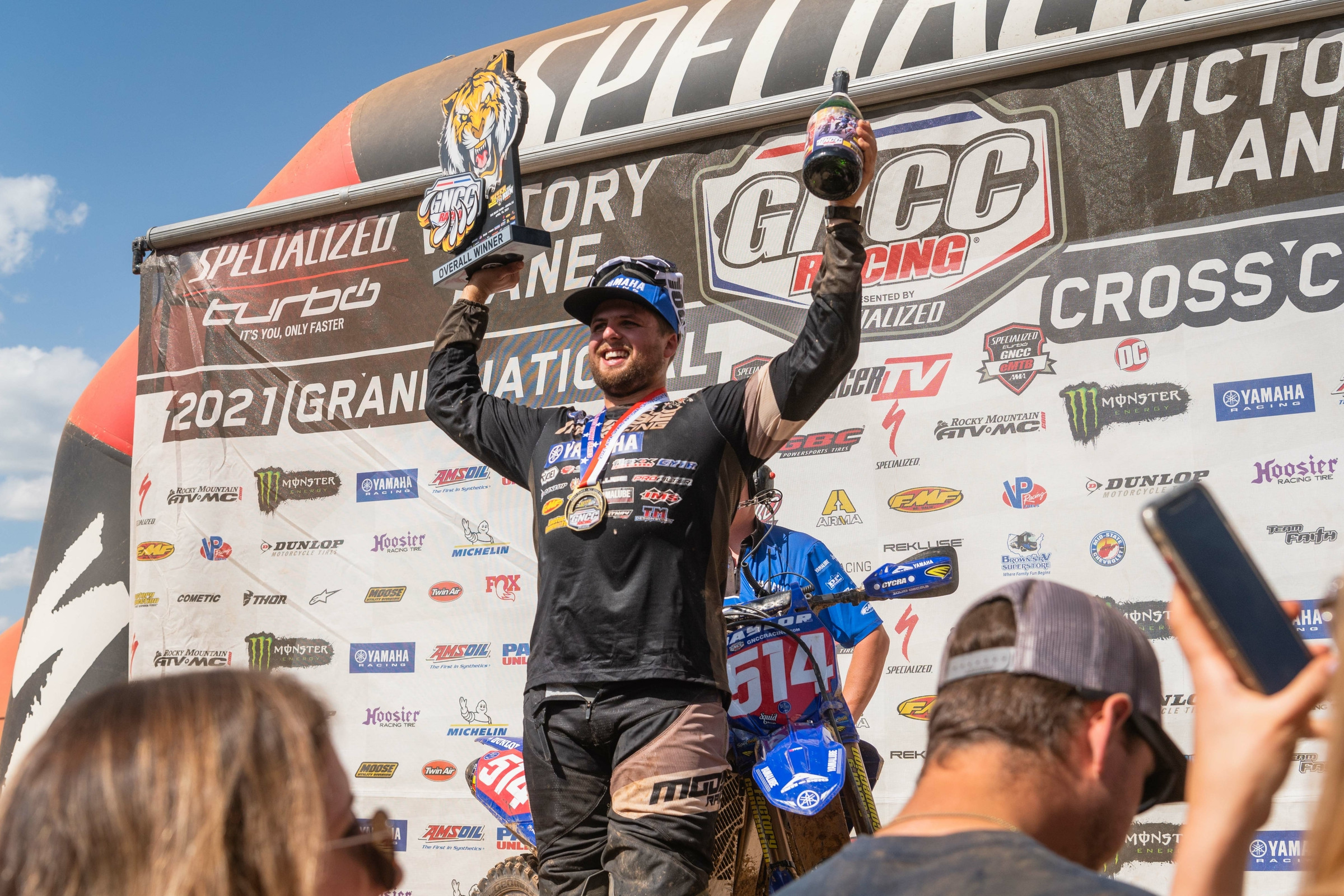 Round five of the 2021 GNCC Racing season would see a return to Union, South Carolina’s Big Buck Farm for the Tiger Run GNCC. The Big Buck Farm hosted the season opening Big Buck GNCC back in February and for the first time ever would host two GNCC events in a single season. While the course and conditions were different from the opening round, the last name of the rider taking the overall win at the two events would be the same; except the first names would be different. Here are a few keynotes from the Tiger Run GNCC.

The season-opening Big Buck GNCC was not a mud race, at least in GNCC terms, but a few muddy spots and wet conditions leading into the event made for some rutted and sloppy conditions. When the series returned for the Tiger Run, riders were greeted with dry and dusty conditions; a polar opposite of the opening round. While the majority of the racecourse was ran on different sections of trail, a few sections of trail were reused, and these would produce the most dust.

With vast layouts stretching through tight woods, fixing a muddy and rutted GNCC course is not like fixing a motocross track after a race. When the races end, generally just minutes after the checkered flag flies, part of the GNCC Track Crew immediately goes to work dozing the course with Sutter 500 Trail Dozers. These machines work wonders, but generally a GNCC course sits for multiple months, or even a year before it’s ridden again so Mother Nature also does a fair amount of work reclaiming the trails as well.

Prior to the pandemic a GNCC course would see one event per season. However, with limited facilities capable of hosting such large events and the uncertainty of scheduling events in certain areas, there have been a few venues in the past two seasons to have two GNCC events scheduled. While this is definitely out of the norm, the GNCC series used to do this a long time ago. Back in the 1980s, Loretta Lynn’s, Big Bear, and Fireball were all legendary GNCC events that hosted two events in a single season, for multiple seasons.

Tiger Run came just six weeks after the Big Buck event, which by my count is the closest together two GNCC events have ever ran on a single piece of property. Of course, South Carolina this time of year is already seeing very green trees and with the course changes from the opening round, most in attendance seemed to agree that the Tiger Run seemed like a totally different event.

At the first Big Buck event this season, Grant Baylor grabbed an overall win that not many folks predicted. Grant has been riding very well since then but actually hasn’t been back on the podium since then. Instead, Grant has remained Mr. Consistent, landing three fourth place finishes and his worst being a respectable seventh at the last race. Meanwhile, his big brother Steward Baylor missed the opening round of the season while a large cut healed on his back. Stu would run in podium contention at round two, but a clutch issue on the last lap dropped him to 14th.

Since then, Steward has gone in a tear. With yet another win at the Tiger Run, he now has three-straight wins. This has pushed him up to third place in the overall point standings, just ten points behind leader Ben Kelley and one point behind brother Grant. The next round will be the Hoosier GNCC, which actually takes place at Ironman Raceway. No, this isn’t a replacement for the season finale Ironman GNCC, but also the first of two events and promises to also be vastly different than the Ironman.

Ben Kelley and Steward Baylor are both previous winners of the Ironman, but the venue has never hosted a GNCC event this early in the season. The Hoosier round could ultimately prove to be one of the most pivotal events of the season, as everyone needs to stop Stew’s momentum before he rallies all the way into the points lead. Amazing to think that someone who started the year with DNS-14 scores could leave round six leading the points!

There’s Some Really Fast Guys All Over The Results

It seems like there was a real shake up at the Tiger Run. Early in 2021, Ricky Russell was a little off pace from what many expected. These were the first events that Ricky had raced since last May when he suffered a crash at the Bulldog GNCC in Georgia, which resulted in a severed femoral artery. Ricky faced a long road to recovery and was even told that he wouldn’t be able to race again. He defied the odds and returned to riding in just a few months, then returned to racing at the beginning of the season.

Some folks expected Ricky to come out swinging, but it’s understandable that things started a bit slow withs two sixths and a fifth. The Camp Coker event would see Ricky suffer through some issues and ultimately finish 17th overall, but Ricky rebounded at Tiger Run. On his Coastal Racing GasGas, he battled Steward Baylor throughout the entire race, eventually finishing in second place just 43 seconds behind at the end of a very dusty race.

While the day ended on a positive note for Ricky, title-contender Josh Strang would suffer through his worst race of the season. Strang ended up with a broken front hub and eventually finish the day 23rd overall. Unfortunately for Strang, this left him scoring zero points towards the GNCC National Championship, as the title is based off the series overall and you must finish inside the top 20 for overall points. Keep in mind, that’s top 20 overall among all the XC1, XC2, and XC3 racers and it’s not uncommon to see A class riders crack the top 20 as well. Strang, who battled Baylor down to the last turn for the win in the last race, now finds himself with ground to make up in the standings.

It would also be a tough day for Thad Duvall. Thad finished second place at the season opener but suffered a crash at the opening round of the US Sprint Enduro Series the following weekend. This crash would keep Thad out of the next three GNCC events before returning at Tiger Run. Unfortunately, Thad’s return was plagued with bad luck in the form of freak mechanical issues that cost him a lot of time and eventually dropped him out of the race with two laps remaining.

The XC2 Class Is Still Really Intense, But Girroir Is Pulling a Lead!

For the past two seasons, the battle for the XC2 class championship has been pretty close. Three riders have dominated the class, swapping numerous wins last season, while several others have played spoiler to the podium as well. Craig Delong, Mike Witkowski and Johnny Girroir were the top three XC2 riders last season and kicked off 2021 in the same fashion. Witkowski snagged the season opening win, but now Girroir is on a tear. He’s won four straight and has pulled out the biggest points lead the XC2 class has seen since 2019, but that lead is still just at 18 points!

Delong has been the most consistent rider in the XC2 class for a long time. While he’s only amassed nine XC2 race wins since coming into the XC2 class full-time in 2015, he’s always in the top five, and this year, Mr. Consistently Consistent has yet to finish off the podium.

This was a tough race for Witkowski, as a late race issue dropped him from first with two laps to go, then to third when the white flag flew, and he eventually finished the race 7th in the XC2 class. This would allow Factory Beta rider, Thorn Devlin, to grab his first-ever XC2 class podium and mark the first 250 two-stroke on the XC2 class podium this season!