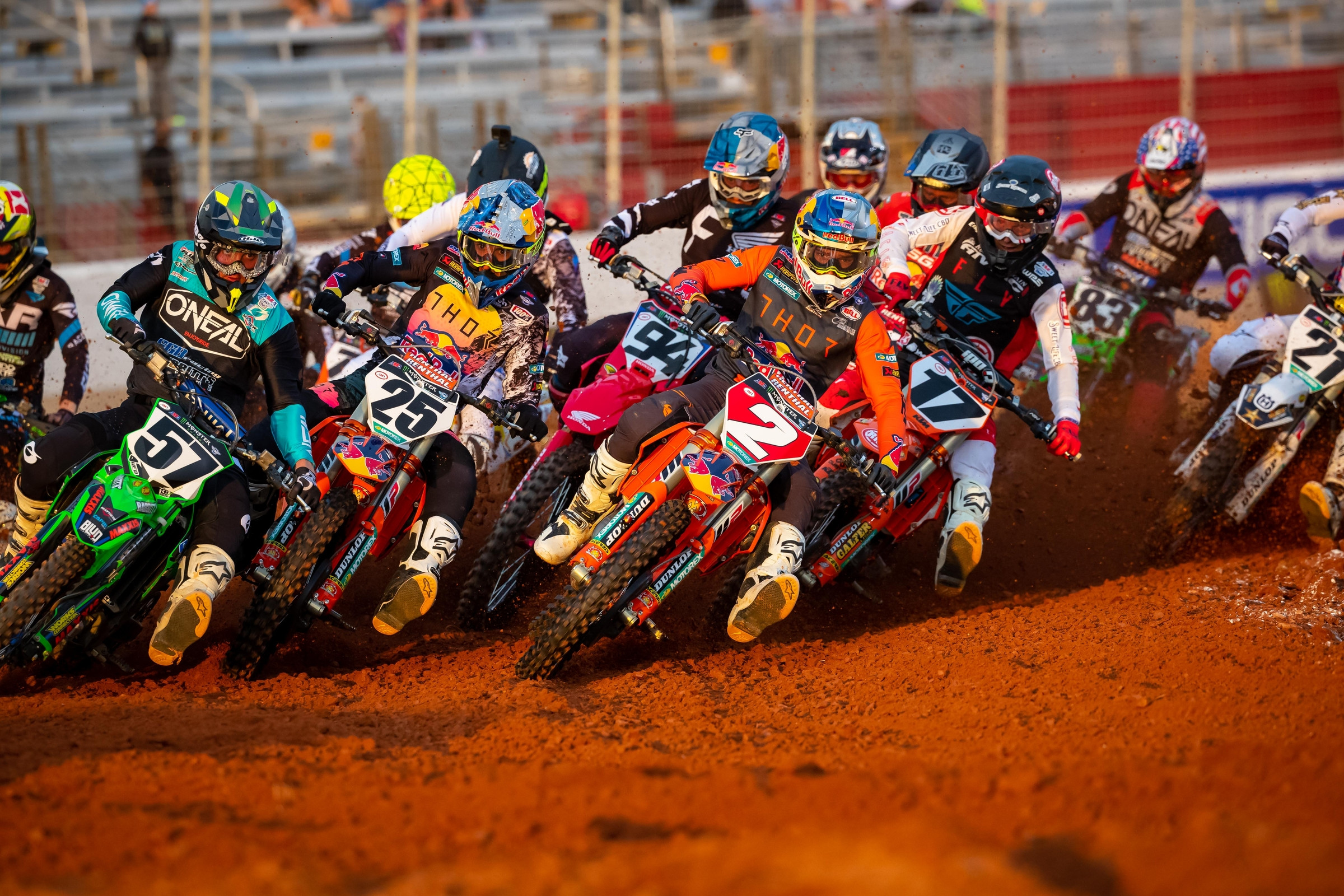 And then there were two. Salt Lake City will again host the final rounds of Monster Energy AMA Supercross. Instead of the eerily vacant seven rounds of 2020, Rice-Eccles Stadium will host a limited amount of fans this year and from the rumors I hear, tickets are in short supply. This sport desperately needs full stadiums again so let’s hope this is the final time we see a half-empty stadium for the sport we all love.

The track design for the penultimate round is a bit on the basic side but after three incredibly challenging ATL rounds, maybe it was time for a breather. It’s also very similar to Indy 3 so riders may be able to draw a few parallels.

The start is in the usual location for SLC, firing into a left hand 180. The first rhythm section will ask riders to triple onto a tabletop, but it might be difficult in the thin air that Salt Lake City presents. With torque and horsepower at a premium, look for the 250 class to opt for the basic line instead of the tougher ask. After the hopeful triple on, riders will step off and immediately into a triple. The first triple onto the tabletop is the most critical aspect. If you get that, the provided momentum will take care of the rest of the section.

A 180 right leads into the longest rhythm section on the track. There seems to be two ways to approach this section and that option will be decided on the first jump. If riders decide to step on-step off, they will then be set up for a 3-3-1 (or possibly 4 out). If they choose to step over the tabletop, they would then go 3-3-2. The biggest possible options are not really going to be viable, in my opinion, based on the lack of engine power. Riders could conceivably pull four out of the corner, triple through the middle and then quad into the next corner. I just don’t see that happening, though, considering the Utah dirt and previously mentioned engine difficulties.

A sweeping 90 right leads into the first standard supercross triple. Most riders will sweep across the inside of the corner and launch from the far left of the jump as their momentum carries them wide. They will “turn down” to the right on takeoff to make sure they don’t jump off the track. A 180 right fires riders into a steep finish line jump and into an another immediate 180 to the left.

Riders cross the start straight backwards and into a tight left before entering a short rhythm section. Expect most to double from the inside line and then triple into the next 180 right hander. The only whoops section is up next and SLC whoops can be tricky. The dirt deteriorates and traction is usually iffy at best. Watch for who blitzes and who jumps and when.

A short straight separates two right hand 90’s and then the second standard triple awaits. These sections are all in the same layout as Indy 3, with this second 90 being the section where Barcia and Friese collided. The next 180 leads into the beginning of lap two.

With two rounds to go, it’s full send time. Switching back to the 250 East presents a reset opportunity. I am curious to see who has gotten healthy since Orlando and if any of the trends have changed. The previous rounds will be my guide as for how to approach Saturday’s picks but also keep in mind that the picks range had gotten very narrow in this region. The injury bug had forced many teams to look eerily similar and it was difficult to make out-of-the-box picks work.

One other trend I would watch for is if those riders that participated in the 450 series bring an edge when they climb back aboard their 250’s. Riders like Logan Karnow, Kevin Moranz, Wilson Fleming, Bobby Piazza, and Curren Thurman have been gaining experience and momentum riding the 450 class but how that transfers to this Saturday is anyone’s guess. It’s something to watch, though.

In the 450’s, we have so much info at this point of the season. We know who is riding well and who isn’t. There is always the variable of pure luck and that is the toughest to navigate through. For instance, Chase Sexton went 2-2-10 in Atlanta. Those choosing him after two great races were rewarded with a really poor score. Similarly, Jason Anderson went 4-3-14, punishing those trying to ride the progression he has shown. Another guessing game comes in the form of Malcolm Stewart, posting 11-22-6 scores. These riders are all elite and yet could have burned you on a random race day for no other reason than pure chance.

I will be looking at these key guys and trying to find the most value. Sexton will present a little more value after his 10th place finish and he rode very well in Utah last season. Marvin Musquin sits just outside all-star designation and could be a nice choice on a track that should suit him. Picks like these, sprinkled in with more of a long shot could lead to a nice score. With injuries ravaging the back end of the 450 class and some of the 250 East riders departing their 450 swing, we could see an opportunity for more risk. Riders like Freddie Noren, Alex Ray, Brandon Hartranft, Justin Starling, and Henry Miller all come to mind as potential high upside picks.

Joseph Smith returns and qualifies for the 250E main event.

Eli Tomac gets back to his high elevation excellence in SLC.

Mitch Payton hits Cameron McAdoo with a tranquilizer dart just before the 250 main event, smoothing him out and calming the frenzy. McAdoo needs to wait a week before 250W races again anyway.