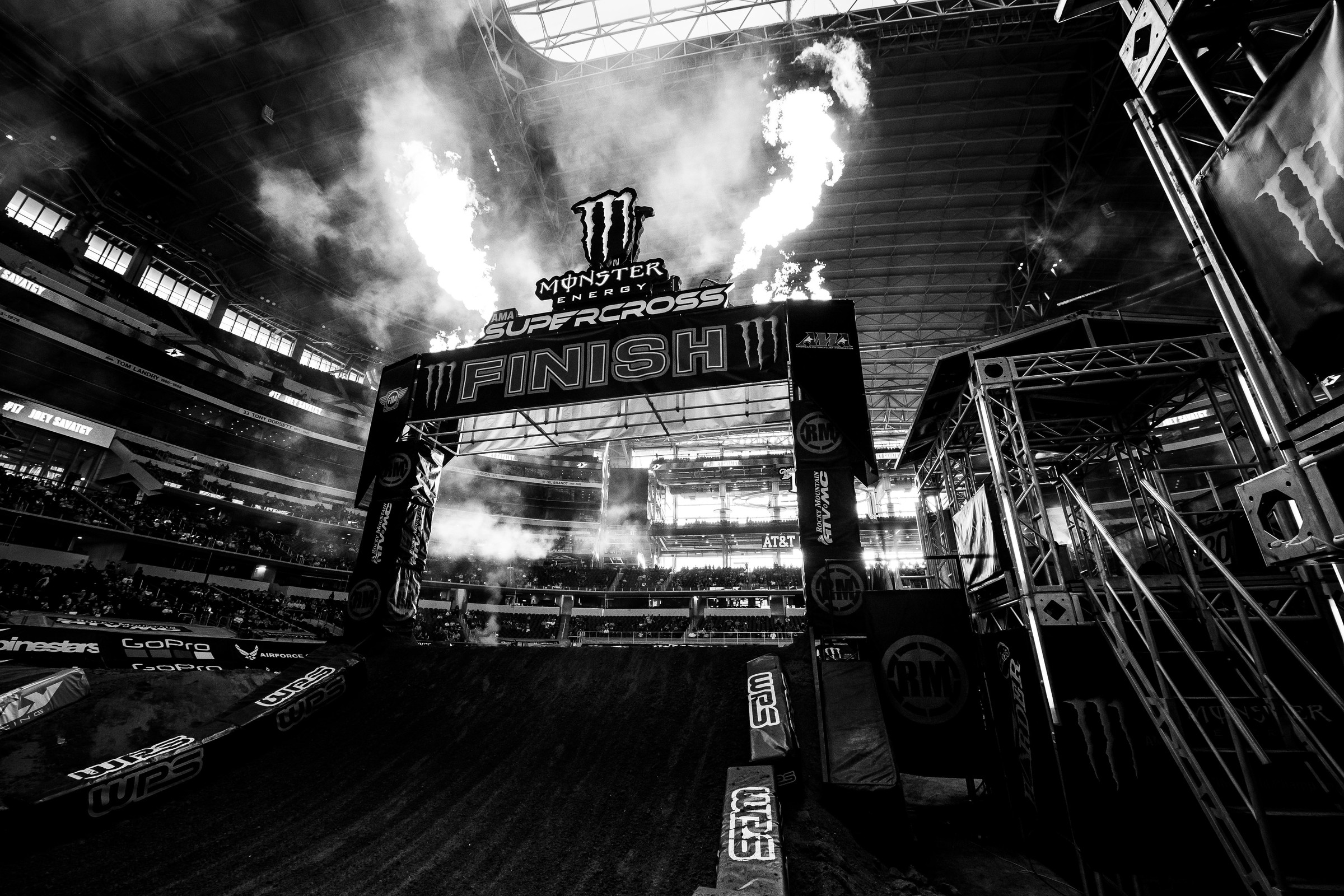 It was back to a “regular” supercross this weekend in Arlington, and another triple-header. Stop with the residency talk please and thank you, seven days does not make a residency. But yeah, just three cities left on the 2021 SX tour, which is a bit nutty to think about right?

Upon arriving in Arlington, I thought it was gonna be a great track. There was some imagination put into it, a few different things, but in the end, it didn’t turn out to be very racey at all. It was fast and kind of easy (the one big rhythm, a 3-4 after the whoops was two-tenths quicker and hard to do) so everyone was kind of doing the same stuff. The split lane was weird, and shocker, didn’t really work. Oh well, sometimes good plans don’t always come to fruition.

Supercross has always been, to a degree, “Startcross” but Arlington 1 took that to the extreme (shout out to Dallas’ own Vanilla Ice BTW) because with everyone doing the same thing and the whoops being small, it was all based off the start. More than usual, that is.

Cooper Webb had one of his easier wins as he grabbed the lead early and took off. He got caught a little bit by Justin Barcia there, but in the end, Webb won and also the points lead. What a swing that was, huh? The start was, as I mentioned, more important than ever before and Webb is good at that stuff. Whether it’s last lap passes, whether it’s starts he has to get, whether it’s raising his game after a crappy day of practices, you have to admire Webb’s ability to get shit done, right? Great day for Coop!

Regarding all the drama last week at Daytona (and really, what drama was it when a guy pushes another guy wide in a turn? I mean, somewhere out there every rider from the ‘80s is puking at the “controversy”), Webb had this to say in the post-race press conference: “Yeah, I love that shit. It gets me going. It was a good week for that, and we made the most of it,” which is hilarious. There’s no doubt Webb thinks he’s in Ken Roczen’s head and I suppose that’s half the battle. I myself don’t believe that Roczen, a World Champion, a National Champion, a rider who’s moved across the world to compete in a strange country, a rider who’s come back from so many surgeries to win again, is able to be mentally defeated by someone who just because he got pushed high in a turn, but hey, whatever works for Webb I suppose. I’m here for all the trash talk!

Ken Roczen saw his red plate go bye-bye with an uninspired sixth-place ride. He crashed in the heat (first crash all year?) and could only get seventh. On a track where you needed a great start, Kenny had the 13th gate pick, which wasn’t ideal. He was only two down from Webb on the line but it turns out the rut out front of the gate was, I guess, jacked up. Hence why that gate was probably open. Once he got a poor start, he just couldn’t do anything out there. It was a bit bizarre for sure, and it was Roczen’s worst race of the year. Crazy how things can flip right? I’m no Stephen A. Smith, but Arlington 2 is gonna be HUGE for how this title is going to go.

Justin Barcia was very aggressive early on to get into second place and at one point he was catching Webb for the lead. He was steady, no drama, and was very fast at Arlington 1. You know, basically KTM and Yamaha traded Nate Thrasher for Barcia and after JB51’s season, I think the Troy Lee Designs/Red Bull guys will take this trade all day long.

We all broke down Eli Tomac’s title chances this past week with his win in Daytona, and as great as he is, I frankly never was persuaded his chances were really better. The reasoning is that his starts haven’t been there this year. He got a good one at Daytona, but he was helped immensely by Webb taking Roczen outside. In Arlington, he again couldn’t pull off a good start, and on that track, it was all she wrote. ET gave back all the gains he got at Daytona and then some with his eighth-place finish. He never really seemed to get into gear out there but again, some of that was track-induced. I never thought I’d say this but the 2021 450MX championship is huge for ET in determining what direction the rest of his career is going to go. I can't believe I just typed that.

Seth Hammaker won in just his third career SX ever! That’s awesome, he’s been very good at all three races to start his pro career and I have to say, from what I heard back in November, this is a surprising start. I had heard Seth wasn’t adapting to SX that well but hey, look at him now! Great race and really, he was in command the whole time and looked rather effortless out there. He’s a big kid, he’s a bit older, and he looks to me a bit like a young Kevin Windham. Not saying he’s going to BE the next Kevin Windham, just the way he rides and how smooth he is, he looks rather effortless. Nothing special really stands out, he’s just fast.

I wrote about McAdoo last week and how these big team managers perhaps need to look into the pits at the pros RIGHT NOW and find someone to support instead of banking on the next 14-year-old who will have too much, too soon, and wash out. Hammaker, although more heralded as a young rider than McAdoo, didn’t have the profile of some of these amateurs and he looks pretty good as of now, right?

Hunter Lawrence has been a big surprise to start the year. After taking second place a week after his first heat race win, Hunter has now moved into my “yeah he could win” list. For me, there was plenty of doubt from me that he could’ve won before the series started. Hunter is approximately 79 percent less exciting to watch than Jett Lawrence, but he’s almost as fast indoors. Sometimes less exciting isn't less effective. RAM IT Wackers McAdoo has also tamed it down quite a bit this year but that appears to be working.

Yeah so speaking of, McAdoo salvaged a third from a poor start and widened his points lead at that. Great work from RAM IT. He’s not nearly as exciting as he’s been in the past but he’ll take that. He looks like he belongs on the podium every time he hits the track—just more composed and in charge, you know?

Jason Anderson rode very well all day. He won his heat race and worked up from eighth after the first lap all the way to third by the end. Yes, he pissed some guys off with his passes but they were all fine by me. I mean, there might be some dudes coming for some retaliation, but that’s just SX frontier justice. Either way, Anderson had his best race of the year.

The whole fake-starts-in-practice thing is dumb, in my opinion. It can cause chaos, injuries, and who knows what else? For the longest time we've heard riders complain about the Triple Crown format having three starts, which are the dangerous part in a race, right? So why do more of them in the day then? I get you want to test out the bike on the grate and all that, but the number of crashes we’ve seen indicates the process is flawed. Also, we have the AMA guy with the green flag sort of sitting there while the riders inch forward more and more in the other practices (which don't use the starting gate). If I was a team manager I would make my guys do a full start once everyone has gone or wait three seconds and go. Whatever it takes to stay out of the potential mess.

Having said that, Joey Savatgy got the “fake start” in the third practice off the grate and then proceeded to rip off two good starts on the night to a season best finish. I know the riders are mostly fragile little flowers and a good fake start would help the fragile confidence, but it must have worked for Savatgy, right? He rode very well all night long and even made a couple of pass attempts on Roczen at one point.

Great work for Justin Cooper to catch McAdoo late in the race and pass him. Yeah, he got re-passed but that’s still good to see if you’re Cooper right? What the hell happened to his starts though?

Alex “Troll Train” Martin was putting together a solid fifth-place night. “We” were looking great and our season was going to pick back upward until “we” had a motor issue on the last lap. Poor Troll Train.

Shout out to Kevin Moranz for pulling some incredible starts on his stock KTM 450 SX-F motor and making the 450SX main event for the first time. That’s got to be pretty cool for him.

Is Dean Wilson back? Was it all because of his starts? And why were his starts so good all of a sudden? I have many questions about Wilson’s Arlington 1 SX ride but it was awesome to see a guy who’s been down on his luck lately bust out a bit. Yeah, the ninth wasn’t awesome but the eye test was better.

Aaron Plessinger said he would be better and you know what? For maybe only the fifth or sixth time in SX history, a rider was right that a bike change will result in better results! AP won a heat (the first of his 450SX career), charged hard in the main event, and finished fifth. A very good result for him coming off that Daytona. Look out everyone, we might have something there!

Dylan Ferrandis has now taken the mantle from Zach Osborne for the “fastest guy with no results” as of right now. He got taken down by Jason Anderson in an aggressive but fine pass and DNF’d on the day. Still, he looked fast, I swear.

Yup, Chiz Chiz’d all over the 450SX class yet again. Almost got his season best at that! Never doubt The Chiz.

Thanks for reading, onto Arlington 2 tomorrow everyone!