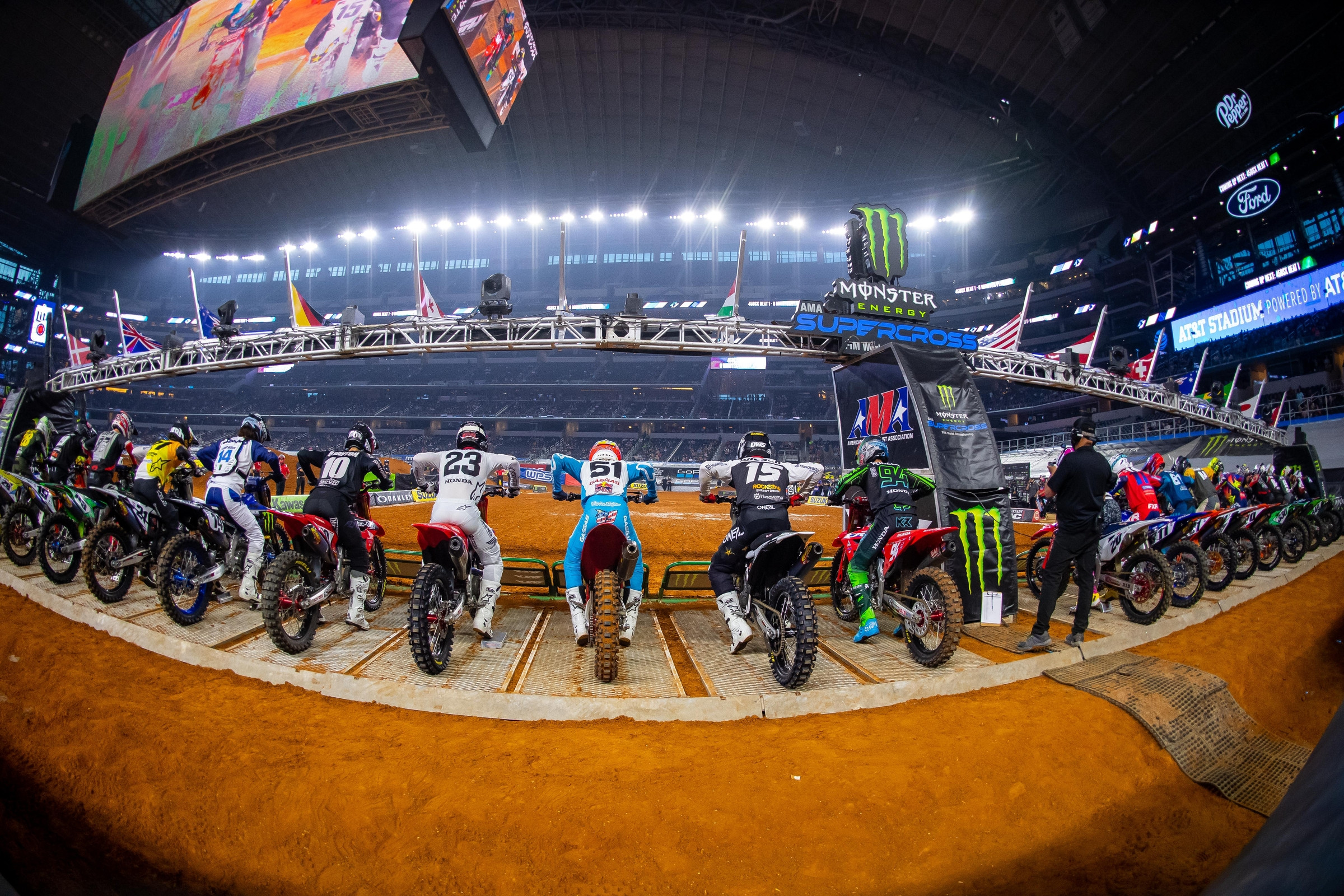 We are back in Arlington for round 11! The second of three stops in the DFW Metroplex is a quick turnaround from Saturday’s race. These “residency” trios are a whirlwind for everyone involved but man, are they fun! The workload is tough on the riders, industry, and media but for the fans, the racing comes in droves. The 2020 and 2021 seasons have redefined racing in many ways and even though I'm siting here typing at 3:30 a.m. to get things ready for another round, I welcome the three races per week variation. Let’s see what the track crew has in store for Tuesday night.

The start for round 11 runs the entire length of the stadium. I like these longer starts, even though they create higher speeds. Long term readers of Staging Area know I like the spacing of longer starts. Riders are able to establish their position and avoid the dreaded handlebar entanglement.

The first corner is a long left hander but I have to mention that having the riders on the inside have to drift right (to avoid the inside tough blocks) before turning left can be problematic. The natural flow of that dynamic can force collisions and those on the outside can find themselves off the track very quickly.

The first rhythm section is made up of six jumps. While that usually indicates riders going 3-3, I think the nature of the first corner will have riders staying inside and going for a 2-3-1 option. That will put them into a 180-degree left and back the opposite direction. This rhythm has seven jumps in short order. Riders will either go 3-3-1 or 2-3-2 here. That choice will be dictated by the take-off of the first jump and also the setup of the preceding bowl berm. If riders can get a nice drive from the corner and the take-off provides a nice upwards “pop,” look for the triple to start things off.

The same finish line jump is up next but instead of racing towards an option section across the start, riders pull a 180 and go diagonally across the start. A flat, right-hand corner sets riders up for the only whoops section. This section reminds me of Indy where riders will enter the whoops without much speed. That will encourage jumping through them and lower the effectiveness of those wanting to blitz with aggression. Cooper Webb is smiling somewhere seeing that setup.

A flat 90 to the right fires riders across the start horizontally and into a 180 left. There are two small step-ups entering and exiting the 180 as riders cut across the start twice. After passing the mechanics’ area, another 90 left sets up for a basic rhythm section and into a standard supercross triple. I look for riders to double from the inside line and then tabletop-to-single before firing over said triple. I could also see someone rolling the first single and going for an on-off here but I think trying to triple onto the tabletop will be too tricky from a flat, 90-degree corner.

The next 90 left shoots into a short straightaway and a S section of 180s. There isn’t much to dissect here but look for riders to stick to the inside line and play a bit of follow the leader.

Overall, the track is not my favorite. It lacks ingenuity but given the quick turnaround, I guess it’s to be expected. I know that the options are limited with the timing loops and finish line structure in place. I will reserve judgment until Tuesday but I just can’t find much to be excited about with this track’s layout.

Saturday was a tough go for most. The juiciest picks were complete fails. Riders like Alex Martin, Jordon Smith, Jerry Robin, Marvin Musquin, Dylan Ferrandis, Benny Bloss, Tyler Bowers, and Broc Tickle all had horrific nights for various reasons. There was a trail of tears for team owners made up of these riders. I was squarely in this fold, mumbling to myself as I drifted off to sleep late Saturday night.

For Tuesday, look for a bounce back in some of these same names. They come with high risk, though, too. Just because they are due for a good night doesn’t mean they will do anything more than what they did just 48 hours ago. Watch those qualifying times and keep up to date with how Saturday afternoon progresses.

With this week’s track layout, look for good starters to be the theme. There will be very little passing so be mindful of choosing outliers if they are likely.

With this week’s layout, the KTM Jr. event lap times are within tenths of Webb, Roczen, and co.

Justin Cooper flies in Mike Alessi to help get his starting groove back.

Ken Roczen rides into opening ceremonies on a flying carpet as part of his newfound mental clarity.