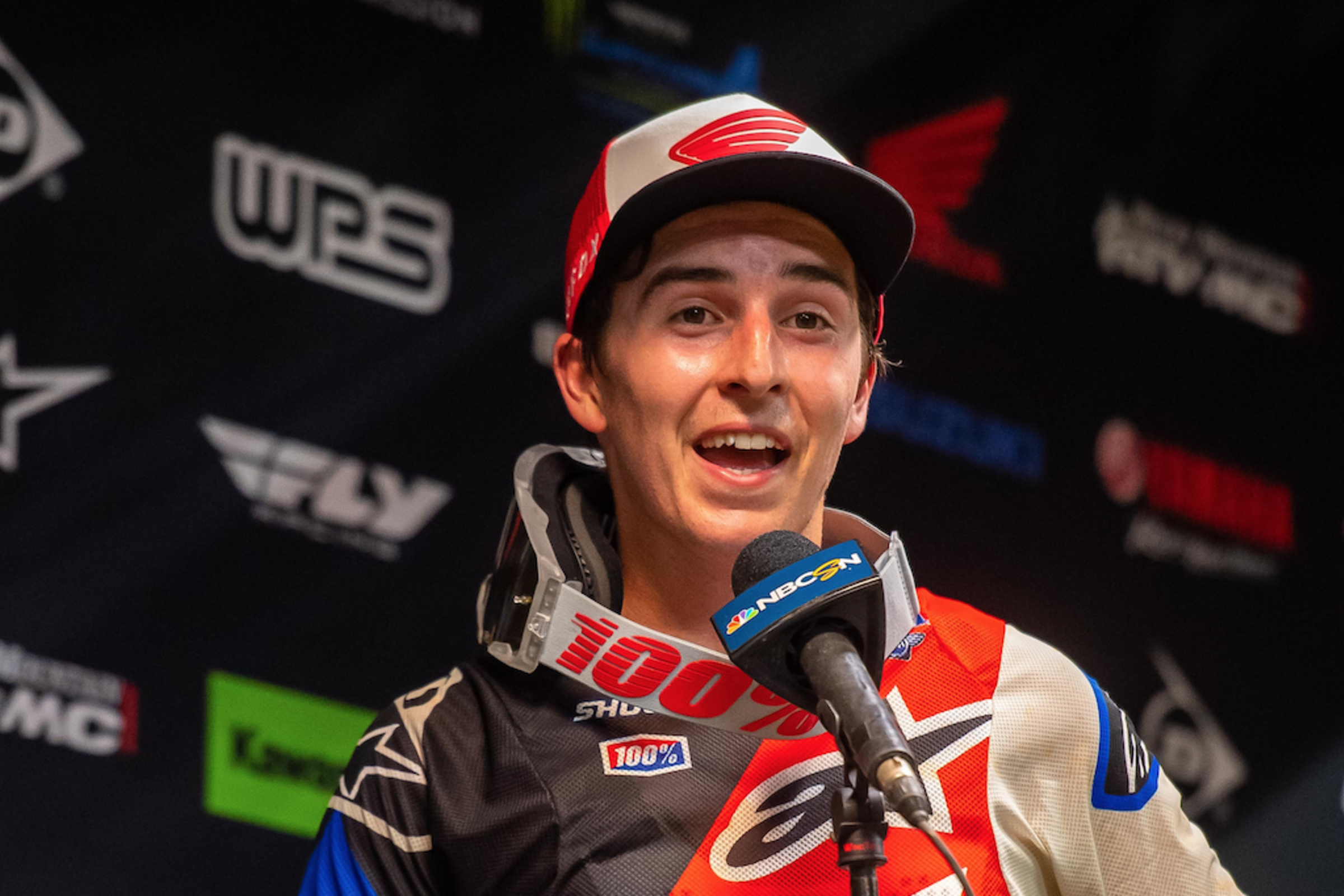 Supercross has not come easy for Honda HRC’s Hunter Lawrence. The elder Lawrence brother was forced to the sidelines in 2019 and 2020 due to injuries, making this year's third round in Arlington, Texas, on Saturday night, just his fifth career start. We're starting to see big signs of progress from Hunter indoors, as the Australian claimed his first career heat race victory a week ago in Daytona and followed it up last night with a career-best second-place finish in the main event.

Lawrence spoke with the media following the race via Zoom.

Racer X: You just recently told me in an interview that you were at your lowest in your career last year at the beginning of the nationals, facing another injury, almost giving up. What does it mean to persevere and get to this point and not only basically make it, but you got your first supercross podium?
Hunter Lawrence: Yeah, it’s awesome. It’s pretty cool to prove yourself right and just keep believing, keep believing. You believe in yourself for so long, and no one believes in you more than yourself. So, you keep telling yourself you can do it, you can do it, but when you’re not doing it, it’s tough. It mentally just chips you down and down. To push through that time last year when obviously Jett was doing really well and I was just struggling with my body and the injuries and stuff, it was like it was never ending. It took a big toll on me. We just dug deep and pushed through it. Even two months ago I wasn’t even doing the full supercross track, just due to coming back from that shoulder surgery after the outdoors. So, the progression rate is pretty steep at the moment. Every time I get on the bike, I just feel better, feel more comfortable, feel fitter, stronger, more confident, more sure of everything. It’s cool.

What has been the key to your success? What was something that was able to get you over the hump and actually start making sense of this?
I think the biggest thing was figuring out my body and getting that to work properly. My body was just so fueled with inflammatories and created autoimmune disease and basically, I’m almost a type two diabetic and stuff. That alone was a huge thing on just not being able to train. I’d do something and the next day I would just be like, I can barely move. So that was a huge thing alone. Then just being healthy. Every time I would feel good on the bike, I’m on it and getting better and stuff. That side of things is huge. Obviously, there’s little bits and pieces, but that was the biggest thing is just being healthy.

During the later stages of that race, you were starting to take some time out of Seth. Seth had a couple mistakes. Was there a point where you thought maybe that victory was in sight?
The victory, in my head I was like, “It’s right there.” When I got into second, I was right there. He was riding really well and wasn’t making too many mistakes. I think the track was pretty simple as far as the rhythms and stuff. Even if you messed something up in the turn, you could still hit all the rhythms all the same. Like we saw in the last five minutes, I was getting closer and closer. I think it was a lap or two to go, I was probably the closest I had been and then there was lappers kind of in their battle without even realizing it held me up a smidge. It kind of opened it up again. I kept trying to pull it in and ran out of laps. Everyone was riding good today. It was just the track was pretty simple for the most part. You had to do something a little better to pass and stuff.

Your physical state, how are you doing? How are you feeling going into Tuesday, having your first super Tuesday of the year?
Good, mate. I feel really good. I felt strong all day. Main event I was able to push all the way through the end and put in the fastest lap time as well. For the most that was cool. I’m looking forward to it. I think it’s awesome that we just get to race again. Maybe some of the 450 guys aren’t as stoked with the 17 rounds they do, but it’s only our third round. So, I’m eager to race. I look forward to it.