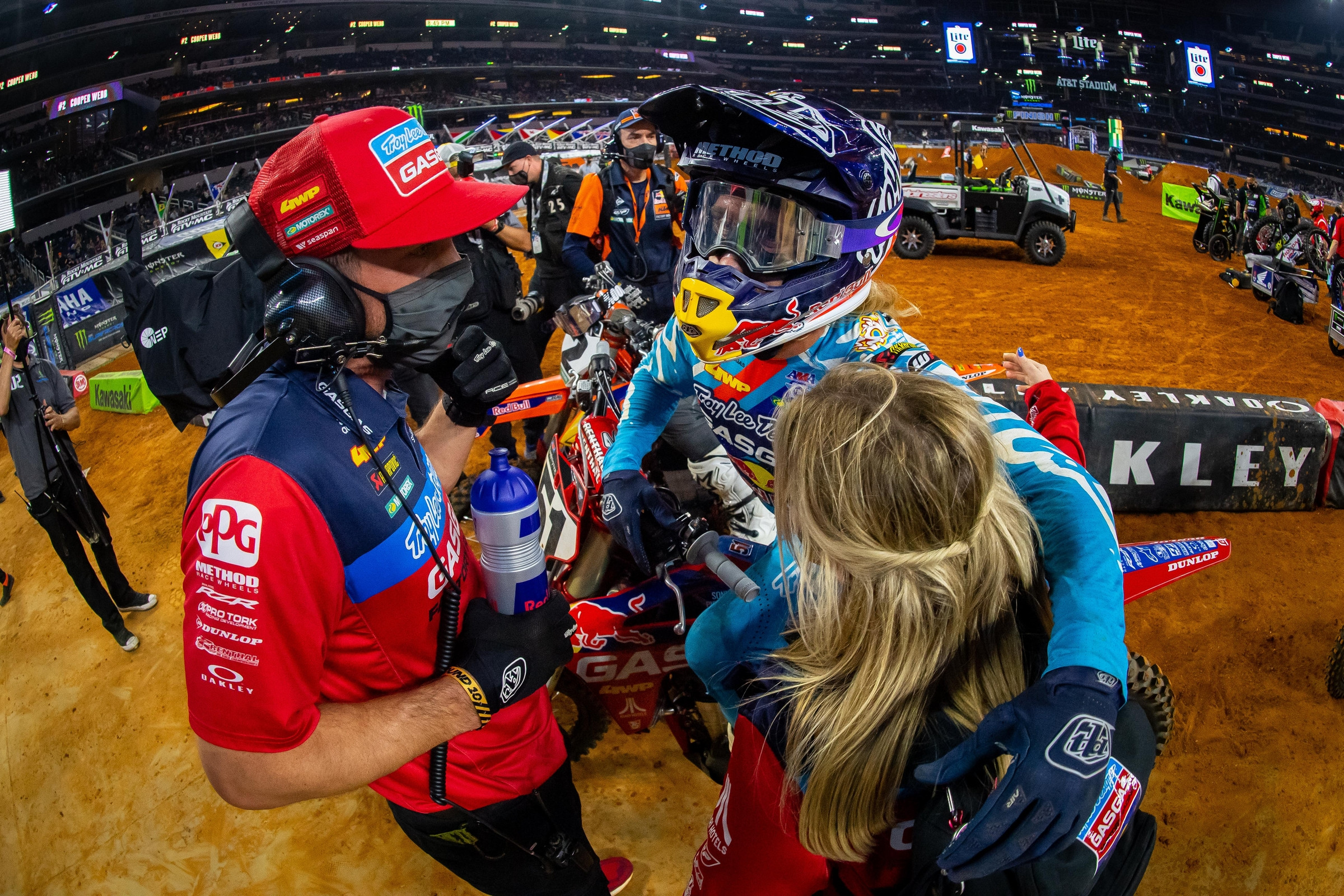 After falling into a bit of a slump following his season opening race victory at Houston 1, Troy Lee Designs/Red Bull/GasGas Factory Racing rider Justin Barcia seems to be trending in the right direction. The last four races have returned 4-3-6-2 results and Saturday night may have been the best he’s looked since the opener. Sitting fourth in points, 47 points down of Cooper Webb, his title chances are highly unlikely, but there’s still a lot to play for and Barcia looks ready to make a push in the second half of 2021.

He spoke with the media after his second-place finish via Zoom.

Racer X: Justin, how was your day? Seemed all was well in the main. Walk us through it.
Justin Barcia: For sure. It was a good day. I’m not like the best qualifier ever. I’m always in race mode, so my practice times are always kind of like where the pace is in the race, so I did like 45s, but the other boys were able to get down into the 44s. So that is a little bit annoying sometimes, but going to the heat race I know when it comes time to race, I’m always good. I didn’t have the best starts today but had decent starts. Heat race I pushed pretty hard, passed a few guys, ended up third which was cool. Then main event, I just got off to a decent start. I didn’t have the best rut, but I knew I could overpower a crappy rut and hold the inside of it. I had to definitely be aggressive the first few laps, make some good passes. That’s when I got into second and definitely charged really hard. Me and Coop were pretty similar lap times the whole entire race. The only thing I was doing a little different was skimming the whoops for a while, and I felt like I was a little better there. Just couldn’t make it happen, so second was what it was. Daytona was really difficult. We had to reset the week coming in here after Daytona and kind of get back to where I was really comfortable. Happy with second. Definitely always want to win of course, but I’ll take this and move on. These aren’t my best conditions. I’ve never been a great hard-pack rider, like throttle control. So just lots of learning for me and stoked to be on the podium.

How cool is it to have another rider in a press conference taking heat for contact (Jason Anderson)? You had no issues tonight!
[Laughs] That was good. I like it, though. I live for tight battling racing and aggressive stuff. I was just kind of in my own zone tonight, just making good passes, moving forward. I was super comfortable with the bike and stuff. All good. I’m super happy. I was just thinking about what Cooper said. You want to have that base [bike setting]. I kind of got away from that at Daytona a little bit because it’s a unique place, but this week I kind of before this got back to a home setting and just fine tuned here and there today and felt good. So, I’m looking forward to the next two here. I think it will be good for me. I hope to have some great racing with the guys. It’s been good this year. Some aggressive stuff, but that’s what it’s all about. We’re all going for it. We want it. It’s fun.

Fourth in points, two out of three podiums. You had the one win. What’s missing right now to get you back up on that top step? I know you don’t want to be one and done.
No, definitely don’t want to be one and done. I don’t really have any pressure on myself right now, just going out there and doing my best. Tonight, if I could have started a little closer to the front that would have helped me for sure. So, the next two, just put myself in good positions, really. I think that’s it. My speed is good, and my bike is good. Just need to put it in there.

That section after the finish line was really unique. Offset wall jumps, kind of a kink in the middle of it. What did you think of that section?
On press day it was not very fair, for sure. The inside was better, and the outside wasn’t good. Then today, it was like the outside was better and the inside was good. Then as the day went on, they kind of made it better and better and they were pretty fair. So, to me, yes, the track was fairly easy, but in the main event it gets really rough, it gets slick, it gets bumpy. So, I feel like jumping through whoops or skimming or whatever, there were separators for sure in the track. So, I think all in all the track was good. There could have been a few things here or there, but all in all, I feel like that option thing was quite cool because you could switch it up a little. For me, it was good. Like I said, I’m not the best hard-pack rider, so definitely going to have to work on my throttle control in these conditions this week.

Is that split lane something you’d like to see back in the mix in the future?
Yeah. I remember back when I was on Honda 450, they did some option stuff, and they would do it in rhythms and stuff which I think that was a bit weird. I think this one was good. You could charge into it fast. You could scrub it and put the power down. So, for me, I liked that better than them doing an option in a rhythm or something.

When you have a track that’s sort of hard to make up time, and you get to a point where you’re struggling to maybe make up time, what do you do to stay focused? What do you do to not just zone out, almost?
It’s definitely difficult, but for me, I had something in front of me to chase, and that was Cooper. For him, he just had to keep the power on because I was coming from behind. So, it was one of those things where I kind of could see where I was a little bit better, but there wasn’t enough on that track for me. I just couldn’t go any faster to close that gap. But for me, the best spot I was in was the whoops. So, I was trying to take advantage of that, kind of moving around, searching a little, to the left, to the right. Towards the end I started jumping the last few laps. So, you just have to try to find those marks and be really patient in the spots that are really slick. All in all, you just have to try to find those spots you’re good at.