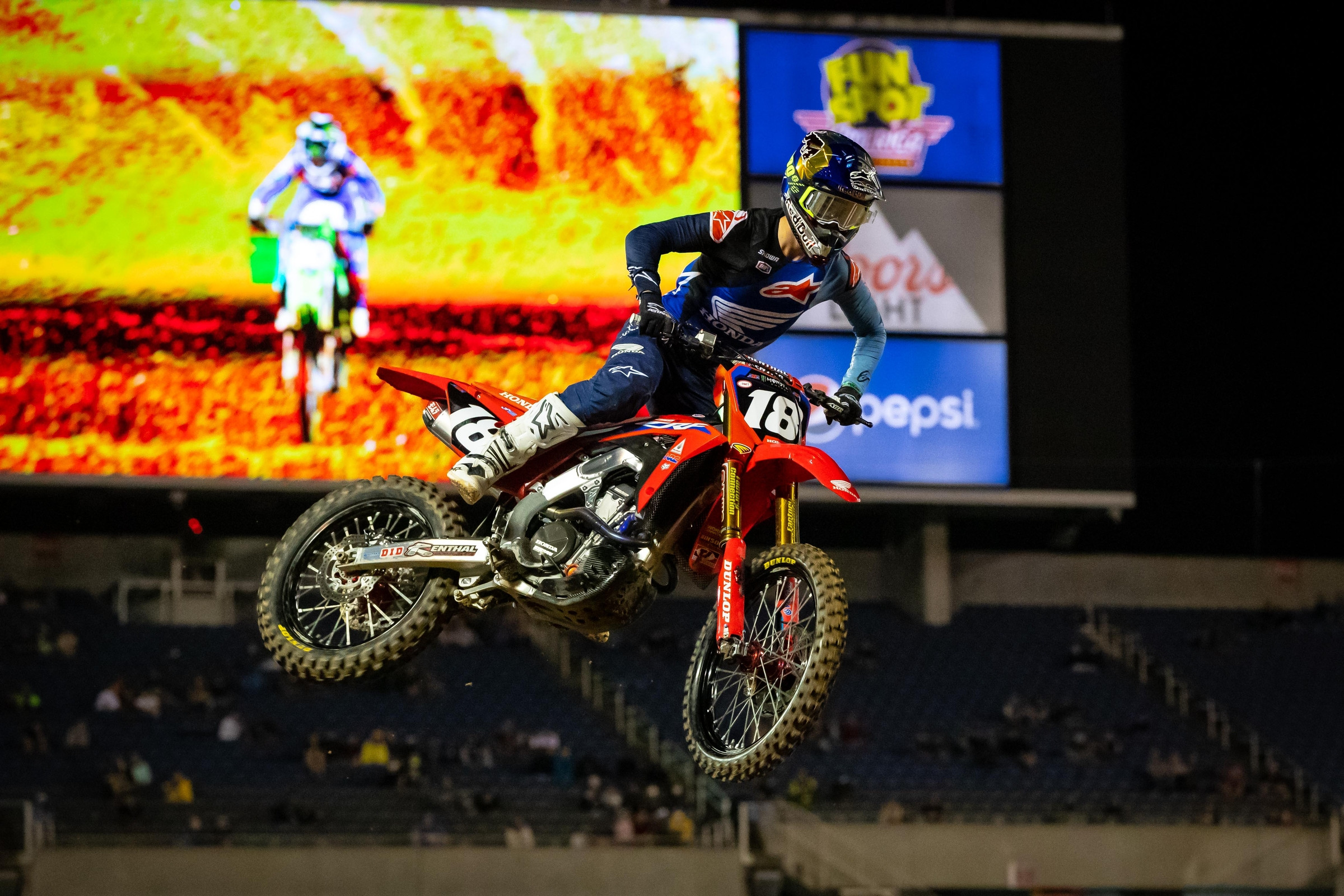 Teenaged drama. That’s been the story for Jett Lawrence this year, as his season has featured plenty of ups and downs, including wins, passes, crashes, and even a missed main event with injury. It came back together for him in Orlando. The 17-year-old Team Honda HRC rider got the early lead and held off 250SX East Region points leader Colt Nichols to net another win. The last time Jett got a start like that, he won round two in Houston.

Racer X: It didn’t look easy, but that’s the way you want to do it, right?
Jett Lawrence: Yeah. It went really nice. It felt similar to H2 [Houston 2]. Obviously H2 I had more of a gap, but it was good. It was a fun ride. I had Colt [Nichols] right there, so I had to make sure I hit my marks. It was all around a pretty good ride, I felt like.

He was catching you at one point. Did you know that? You were marking him? Did you pick it up somewhere? It looked to me like you picked it up a little bit, but I don't know.
It was funny because I had no spot where I could see him, actually. I kind of knew he was there, but I didn’t know how far he was, but I crept up on him one lap. It was like three seconds I think on the pit board. I was like, at least I got a bit of a gap on him. I had to look at the TV every now and then to kind of see where he was at and go, “Okay, he’s there. I have a bit of a gap now, or he’s right there.”

I thought you were doing really good in the whoops. Did you feel good in there? Did you have any sketchy moments?
Yeah, I felt like I made sure I hit my front wheel on every whoop. That’s what most people tell me to do! So I did that. I think I had one or two sketchy moments, but that’s going to happen when you do 19 laps. You’re at least going to have one sketchy moment, but I was able to hold the bike pretty strong and I rode it out fairly good. I felt really comfortable with the whoops tonight.

The track was slippery when you guys first got out there. It was kind of muddy. I thought you were getting that three over the table, pretty much the first guy. How much better was the track for the night show? A ton better?
Oh, yeah! The track, I heard the people actually watered the track! For how heavy it rained this morning, I thought it was going to be a mudder race. I was trying to get prepared. Even the first practice it was a little muddy on the flat spots, but still the track ain’t terrible. It’s pretty good, to be honest.

The lappers were though, huh?
Oh, yeah. It’s hard because I’m not bagging on them, but I’m getting pressure from Colt, I have to make sure I hit my marks and get on the fast lap and you catch them pretty quickly. When they’re singular, it’s not too bad, it’s just a real pain when they’re together. But there’s some guys that don’t listen to any blue flags! I felt like at one stage, this one guy, I thought I was going to blow my bike up because I was revving the bike at him so much. I need an airhorn on the front of my bars or something.

I know a guy who has got a horn idea for a bike, so I’ll pass you onto him. How’s your shoulder? Are we at 100 percent yet?
No. The shoulder is definitely not at 100 percent. I think it’s probably at maybe 75 percent, 80 percent. It’s still not there. I had G [Dr. Gubernick] tape it up really good, which helps. It’s definitely far away from 100 percent.

What are you going to do on the break? You going to hang out and watch Hunter next week?
Yeah. For Hunter, I think I’ll be coming out to Daytona to have a little watch and do some golfing, finally. Most of all, I got some new clubs and I’m going to finally go and use those things!