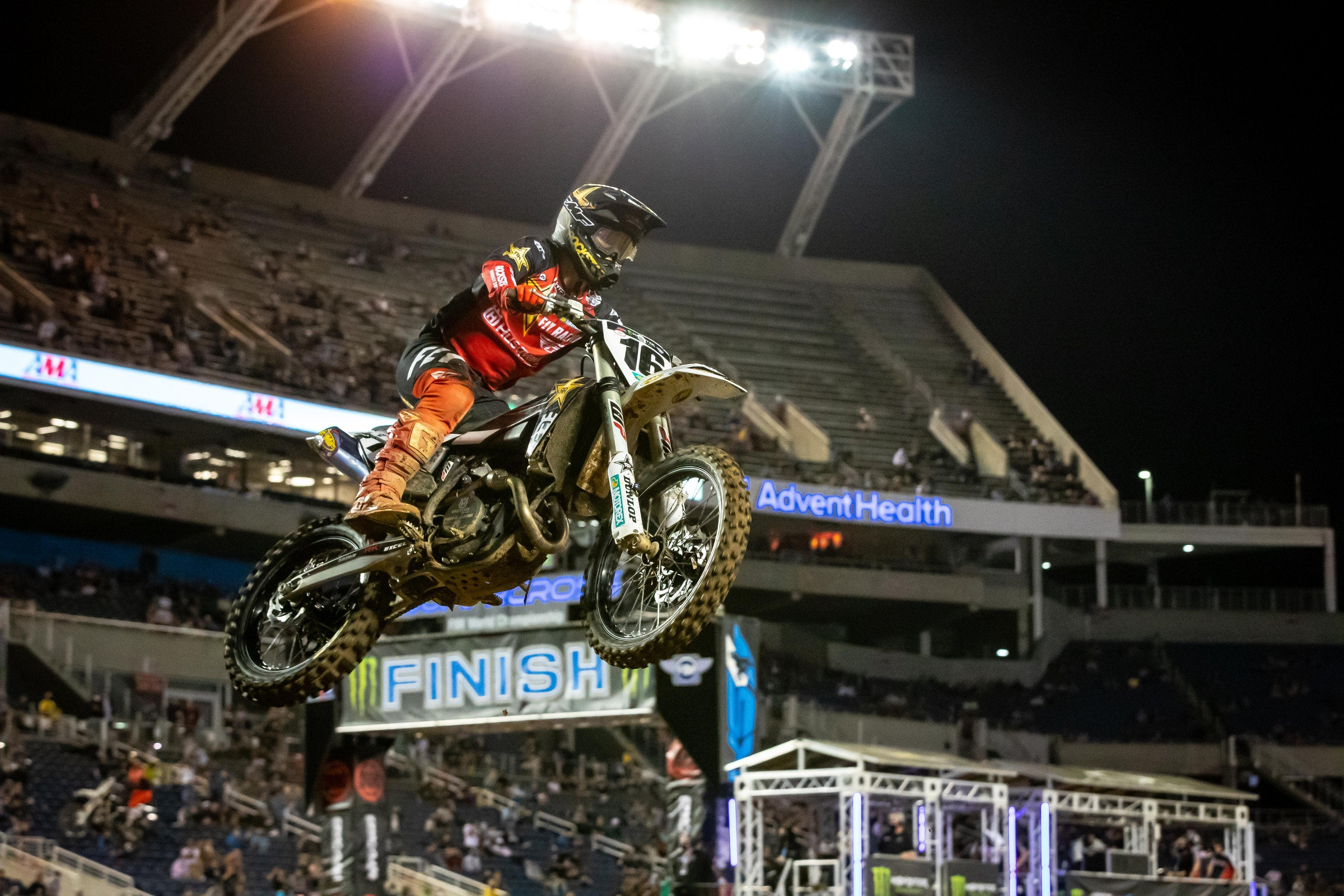 After a breakthrough career-first win in Monster Energy AMA Supercross last season, and the Lucas Oil AMA Pro Motocross Championship in the 450 class, Zach Osborne was at least expected to be a podium guy throughout the ’21 season, if not a race winner and title contender. The Rockstar Energy Husqvarna rider has been fast, but the results have not matched expectations, mostly due to bad starts, as well as some untimely crashes. Just as an example, Osborne started the year with a scary practice crash at press day before the day before the season, when his bike locked up on a jump. Then he was down in the first turn in the main event. At round two he was up to second and running with Eli Tomac until he went down late and was shuffled all the way back to 10th. Since then, more tip-overs and bad starts, including getting stuck in the starting gate at Indy.

Persistence paid off for Zach on Saturday when he nailed an incredible start and led the field into turn one. A big kick in the whoops cost him the lead, but Zach persevered as per usual, stayed steady, and when Justin Barcia bobbled late, he pounced to move back up to third. That’s Zach’s first podium of the season. Steve Matthes called him after the race.

Racer X: That has to be a good feeling for you. Orlando 1 podium, finally. What a relief.
Zach Osborne: Without a doubt. Finally got a start. I had a little mistake there in the whoops, I think on the second lap, and got shuffled back pretty quick. Then I sorted that out with the jump line and went to work there on the long haul and was able to pull off a podium. So it feels pretty good after a pretty rough day. Just was kind of off all day and qualified 17th after my throttle cable actually broke in the second practice. So I missed the good laps there at the end, but it is what it is. It feels nice to turn it around.

How close did you come to going down there in the whoops? It looked close.
In the whoops, I didn’t even remember that I had done it and the guys were like, “Man, that was a close one.” I was like, “What are you talking about?” I’ll have to watch it again. It wasn’t that close, because I wasn’t like flipping out.

You lost that spot to Bam Bam [Justin Barcia] and you rode around in fourth. That might have been where you finished, but you kept the pressure on, he had a big save in the whoops, you get third. That’s the kind of stuff, the luck, that has been going the other way for you, I feel.
Yeah, it was. Just like my little tip-over at Houston 2, which would have been a second. I was tracking Tomac down there for a little bit. That sort of sent that path in the wrong direction, I think. I had a couple of spills, like Houston 3 where I fell over passing for sixth. So, take those points back and I’d be in a different position, but it is what it is. I can’t complain too much. I’m happy to have made some progress tonight. Just to get a start and have some clean air was unreal.

I thought we were in for a mudder, too. It’s amazing how it turned out.
The track, it can’t be understated what a good job they did today. The dirt is not that great, and they made an absolutely awesome track out of what could have been a total quagmire and a mess. So they did a great job.

Did you have a plan on where to get Bam Bam, get close to him? I didn’t see many spots.
Well, I didn’t. There wasn’t a lot of passing, as you saw in my heat race. I started seventh and got seventh, or started eighth and got seventh. I just had a gut feeling that someone in front of me was going to make a mistake in those whoops because they were so gnarly, and I was doing that jump on, triple, quad, and it was very consistent. Justin kept going right down by the bales. It’s good there, but if you make any kind of mistake, exactly what happened to him happens. You get tangled up in the Tuff Blox and you can sometimes save it, which he did, or you end up just yarding it. So it was one of those deals where I just kind of trusted my gut and tried to grind him down a little bit. He was really close there at the end I think because of the jump line behind me. I knew he was going to try to run it in on me somewhere so I tried to just really execute that last lap and take it home.

I happened to be watching you off the start more than anybody else. I don't know why I was looking at you, but an amazing first 50 yards out of the gate.
Yeah. I basically changed everything I do on the start for the main event because my starts have been so bad. With my new bike setup I’ve been struggling to get that launch and I changed a bunch of stuff before the main event. Got a really good start on the sighting lap and crushed the main start. Once I got out of the gate, once I crossed maybe ten feet, I couldn’t see anybody left or right. I was like, “Holy cow, this is a good one.”