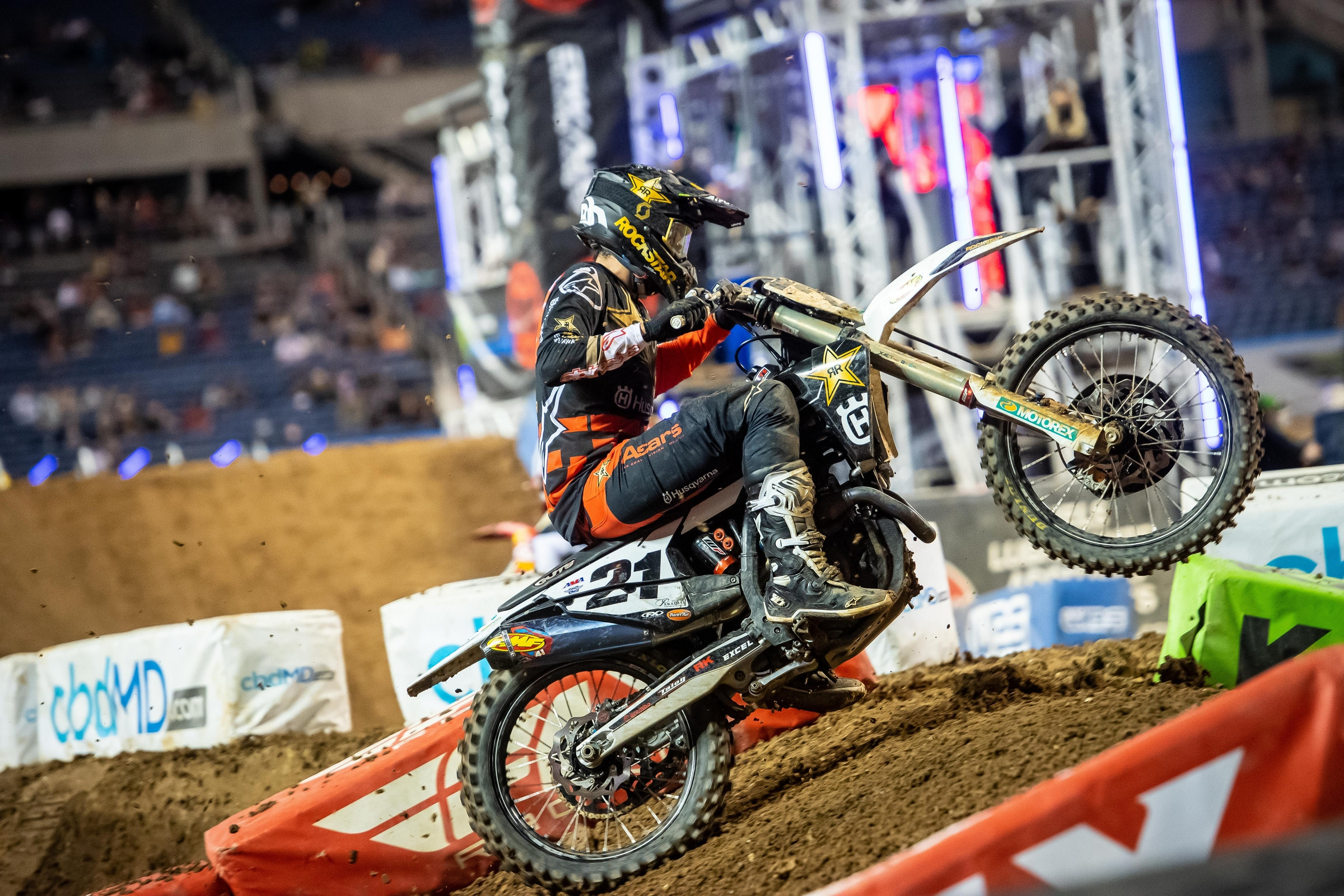 Cooper Webb and Ken Roczen are threatening a breakaway at the top of the Monster Energy AMA Supercross standings, combing to win the last five races in the series and pulling clear of the field in points. That doesn’t mean the field isn’t still stacked. Here’s a mention of some other riders in the pack.

Very underrated charge from 15th to sixth from Aaron Plessinger. The Monster Energy/Star Yamaha Racing rider is showing signs of improvement this year, right in line with team owner Bobby Reagan telling us, “You’re going to see a totally different Aaron Plessinger this year.” Well, the improvement has been quiet, but last year AP scored 77 points in seven rounds, this year he’s scored 99.

“It was one of my better days, for sure,” said Plessinger in a team statement. “I started off pretty hot in practice. Got up there on the board for a second, then I ended up qualifying 11th. I didn’t get the greatest start in the heat race, so in the main event, I absolutely went for it. I jumped the gate and then backed up, and then took off with all the other guys and came out 10th. Then somebody rolled the first supercross triple, so that put us back quite a bit. I think the guys said I was 17th going into the first lap, but I just put my head down and charged. The track was so slick and replicated the test track in Corona. I think my bike really liked that, and I really liked that. I charged as hard as I could until the end of the race and clicked off a lot of passes and wound up in sixth place. That’s one place behind my best career finish. If that doesn’t give me confidence, then I don't know what will. I’m really stoked about my riding tonight. I’m pumped to come back here next Saturday because I think I’ve got more to prove.”

Justin Brayton led the race briefly when Zach Osborne swapped sideways in the whoops. Brayton was then under heavy pressure from Cooper Webb, Ken Roczen, and Zach Osborne and they passed him quickly. Brayton then began losing more spots, and the Muc-Off Honda rider, who had a podium earlier this year, went all the way back to 11th. Turns out Brayton lost his front brake.

“I didn’t feel terrible but obviously I was feeling a lot of pressure from Kenny and Cooper, yeah and then ultimately I lost my front brake,” Brayton told our Steve Matthes after the race. “I still feel like I could do better than 11th, but it was a whole new system and it was my first time riding with it. I don’t know, lap 11 or so it would just come all the way in and it just wouldn’t do anything. That track was tough with no front brake because we were tripling into some turns, and quadding in before the whoops. The low line was the best line. I pulled it in and it did nothing, just down to my knuckles. Yeah, it got difficult and…next thing you know there was a pack of bees behind me!”

Brayton was also racing on his practice bike. The team planned to have a new engine shipped in for the race but bad weather held up the shipment.

“My race bike engine that was being shipped from California and it didn’t make it, so I had to race my practice bike,” Brayton explains. “I went and rode with Ken [Roczen] yesterday, just did some starts and stuff. Then I’m standing in line at Chipotle and [mechanic] Duff calls me, ‘Hey what do you think of racing that bike you just rode?!’ [Laughs] It was crazy, but oh well.”

Jason Anderson’s season has been far below his usual standards, and he even missed a race with a dislocated finger. Now he’s back, and suddenly at Orlando he was much better. Anderson was fastest in the first qualifying session of the day, then made a slick pass in his heat race to get around Adam Cianciarulo for a second-place finish. In the main, Anderson rode strong late. After a long battle with Musquin, he started pulling away and then began catching Eli Tomac for fifth late in the race. With two laps to go, Anderson ended up crashing while trying to lap Shane McElrath, which cost him spots to Plessinger and Musquin. That’s his third eighth-place finish of the season, but this was easily his best riding of 2021.

“It was an improvement all around for me today,” Anderson said in a team statement. “My practices were better and my racing was quite a bit better, so If I could get a start it would help my results. In the main event, I got up there after a not-so-good start and got behind Tomac in sixth but I came together with someone, it was more my fault than anything, and dropped back but we’ll move on to next week and keep progressing.”

Marvin Musquin has figured out nearly every way to start a race from behind this year.

Sometimes Marvin just gets a bad jump, sometimes he goes down with other riders, and last week he rode too conservatively early to make sure he didn’t go down. This time? Marvin hit a slick patch on the start got huge wheel spin, putting him last going into the first turn. He snaked up to 13th on lap one and then battled through to seventh. Plessinger did get Musquin on his charge through, but Marvin picked up a spot when Anderson went down.

“I was a little bit off in practice but I focused on the night show and made sure I had a good heat race to put myself in good position,” said Musquin in a team statement. “ I was so ready for the main event, I had a good gate and when I let the clutch go it started spinning and my rear wheel went sideways. I lost balance and was dead last off the start, exactly what I didn’t want to do. I put my head down and tried my best, as always. It was sketchy making passes in the beginning but I ended up seventh. I’m just bummed. It was a bit muddy behind the gate and things like that happen.”

Joey Savatgy was fast early, even getting up behind Zach Osborne at one point. Then Osborne pulled back away and Savatgy endoed on a jump. Joey picked it up in 14th, then got around Justin Bogle and Shane McElrath, but Dean Wilson got around Joey at the halfway mark. Joey finished 13th.

Speaking of, Dean Wilson was back in action for the first time since breaking his toe before Indianapolis. “My night was very difficult but it feels really good to be back at the races,” Wilson said in a team statement. “I think the hardest part for me was not being on the bike for almost three weeks, I felt like a fish out of water. I’m happy to get through the night, I know 12th isn't really what we want but I could see ninth right there and with a good start, I think I'll be pretty good.”

Shane McElrath made his season debut after a shoulder injury, it was also his first race for SmarTop/Bullfrog Spas/MotoConcepts Honda. McElrath made a big splash early by holeshotting his heat race and leading a few laps. He would eventually yield to Eli Tomac. In the main, McElrath was near the top ten early but ran out of steam late, and he finished 17th.

"This was a big day! I am so happy to be with the team and racing," said McElrath in a team statement. "The 450 Class is very competitive, and I didn't know what to think coming in. I was at a little bit of a deficit, with round seven being my first race, but it was fun. I tried to do my own thing in practice, which led to a good gate pick, the holeshot, and a few laps led in the Heat Race. It was pretty wild to do that I was trying to calm down a bit. I feel like I'm capable of doing that; it was just crazy that it was already happening. A lot was going on in the Main Event, and it caught me off guard because I haven't been in those positions in my career. It will be a learning curve, but I look forward to building from here on out."