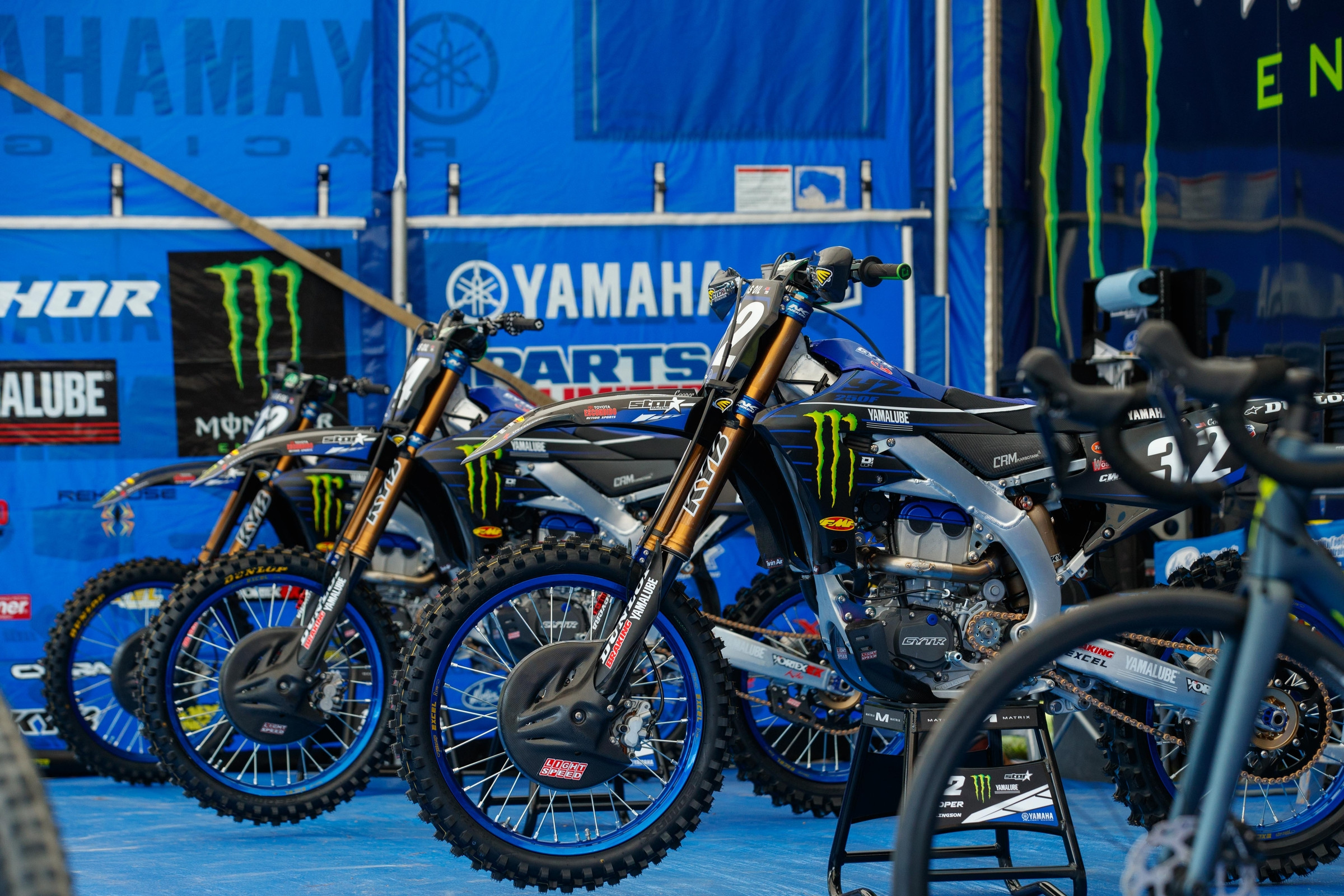 We know it’s painful to read Steve Matthes’ Observations column all the way to the end, but Steve at least packed a nice reward for those who hung on through that rough 30-plus-two. Did you miss it? Here it is:

…silly season stuff is that Ferrandis has signed with Yamaha for 2021 and Star Yamaha will run the factory Yamaha 450 effort, Gas Gas might go with Troy Lee Designs and they’re looking at Joey Savatgy, Shane McElrath, and Justin Barcia, or Barcia may go to MCR (SmarTop/Bullfrog Spas/MotoConcepts) Honda or Penrite Honda, JGRMX Suzuki looks to have that elusive casino title sponsor finally locked down…

Yup. Not only has the Lucas Oil AMA Pro Motocross Championship begun, but so has silly season! Remember, it’s August already, so while it feels like things are just starting, it’s getting late to keep waiting on deals. Plus, now the industry knows there will be an industry next year. (Lots of scared people back in the darkest days of March.) It’s time to start cracking on contract talks. Here’s some stuff we hear is going on.

Everyone Is (on) a Star: At last check, there are approximately 48 riders rumored to be riding for Monster Energy/Star Racing Yamaha in the near future. That’s because the team not only runs a big 250 effort and a big amateur effort, but is now rumored to be have a Yamaha factory 450 squad as well. We’ve heard this could go both ways: either Star runs a 450 team alongside the Yamaha factory effort, or the factory effort just goes away and Star runs everything. Latest scoop seems to point to Star taking over everything. If so, Star is going to be a huge effort for 2021. Try to follow along here.

The Star 250 Guys: Ferrandis and McElrath have to move up to 450s (see below), but the 250 team is already stacked up with Justin Cooper (re-signed through his remaining years on a 250), Colt Nichols, and young guys Ty Masterpool and Jarrett Frye in the wings. All signs point to Christian Craig moving to Star from GEICO Honda for ’21. Then you have a huge pack of amateurs, as we just saw Matt LeBlanc and Nick Romano on the podium for the team at Loretta’s. We might even be forgetting someone else, because Star has so many ams. Also, KTM Orange Brigade prospect Daxton Bennick is rumored to be talking to Star. This team is well loaded for the future!

The Star 450 Guys: So everyone knew that “Yamaha” would make a nice offer to keep Dylan Ferrandis on blue, but we didn’t know which Yamaha team that would actually be. It now appears to be Star, which means Ferrandis stays on the team he currently rides (and wins) for. Aaron Plessinger, also formerly of Star, has said he has another year on his Yamaha deal, so if Star takes over the factory 450 program, he’d just slide right over alongside Ferrandis. Shane McElrath is still out there in need of a 450 ride. Can Star find room for him too?

What About Factory Yamaha?: Big changes along the top of the Yamaha racing program, as longtime racing boss Keith McCarty is moving on, while team manager Jim Perry and technician “Dyno” Dan Rambert have been let go. (We all hear about record bike sales and such, but these are still tough times for some people in the industry. That’s a bummer.) Anyway, Yamaha has slotted racing department manager Jim Roach in as team manager for the motocross team this summer. Could this season be the end of factory Yamaha’s run? Remember, Yamaha’s factory team went away for while (with JGR being the official factory team) before returning in the Chad Reed/Cooper Webb days. Let’s just be honest here: the Star Racing YZ250F program has killed it during that time, but the factory 450 effort hasn’t produced much. Watching Webb leave and become an instant winner with another brand is a real gut punch. So it’s time to see if Star can work the same magic on the big bike. The real question: are the 450 troubles team-related, or is there something intrinsic to the 250F that’s awesome and the 450F that isn’t? Ask around the pits and you’ll get answers on all sides. It’ll be very interesting to watch play out on the track with Star running a YZ450F program.

On the Gas Gas: This Monster Energy/Star Racing deal collides with the other big news from the pits: KTM now owns Gas Gas under its house of brands. And if you watch MXGP, you know they’re taking the brand motocross racing—in MXGP, KTM just slid the Standing Construct KTM support team over to Gas Gas. Similarly, we heard that Troy Lee Designs/Red Bull KTM could become Troy Lee Designs/Red Bull Gas Gas. Even bigger, while TLD is a 250 team now, the Gas Gas component may include a 450 team. One of the first riders they went after? Ferrandis! Yup, the Frenchman is easily the hottest free-agent prospect, considering his supercross and motocross skills and potential, so it was worth it to make him an offer—especially by hanging the “look how much better Webb was on a KTM!” carrot in front of him. (Consider this a dangling orange red carrot.) The new Gas Gas effort doesn’t have the budget a Yamaha factory 450 team does (be it Star Racing or in-house Yamaha), but the hopes were that Ferrandis would take a pay cut to ride that bike. Ferrandis was interested, but we hear it didn’t happen and he’ll be on blue next year. But this Gas Gas deal isn’t over.

Who Else?: With Ferrandis apparently off the market, this Gas Gas team can look at the next group of free agents, such as Justin Barcia, Joey Savatgy, Malcolm Stewart, and more. Oh, McElrath is a free agent, but it doesn’t seem likely TLD would take him back after him leaving them at the end of 2019. We’ve heard both Savatgy and Barcia linked to Gas Gas. Which is the favorite to get the ride? Depends on who you talk to.

JGR: Hey, Savatgy only has a one-year JGR deal, but it’s not impossible he could just end up back there. Each year, a rumor breaks out that Suzuki is pulling its support, but we hear JGR is confident they will be okay for 2021. So why not another run with Savatgy? That seems logical if Joey doesn’t go elsewhere. On the other end, we would not expect Barcia to end up with JGR. Been there, done that.

Barcia: You could put good money on Barcia ending up on a red bike for 2021. See what we did there? Yeah, could be Troy Lee Designs/Red Bull Gas Gas or on a Honda. As Matthes mentioned above, we’ve heard about talks between Barcia and two Honda teams—MCR (SmarTop/Bullfrog Spas/MotoConcepts) Honda or Penrite Honda, which could jump up with a 450 effort for 2021. Hmmm … can you say perfect fit for Justin Brayton? Could Penrite be able to rope together a double-Justin team?

One thing to keep in mind with private teams like MCR and Penrite: they often have to put the cart in front of the horse. If they land a big name like Barcia, they could then use that to leverage more sponsorship money. Sometimes they have to take the risk and hope it pays off, as opposed to a factory, which just has the money sitting there already. This often means the factory can be more certain and firm in its offer.

Still, Barcia, who was raised as a Honda guy, could be really good on an MCR or Penrite Honda if the team has the right support. Barcia has made plenty of money already and is probably pining for a shot on something other than a Yamaha. He has all but said he’s not riding a Yamaha next year. Meanwhile, did you see how well MCR Honda riders did this year in supercross? Speaking of….

What about Malcolm?:Malcolm Stewart had a great supercross season this year. A little less Mookie Fever send it, but way, way more consistency. He tied Zach Osborne for sixth in points and was heading toward podium territory. Everyone knows Mookie can go fast; now they know he can last. On the outside, it seemed like Mookie and MotoConcepts was a great fit, but for some reason, we’ve heard he’s shopping and would like to ride elsewhere. Where will it be? He’s certainly a prospect for all those rides listed above. Could he be one of the 48 riders on a Monster Energy/Star Yamaha? A Gas Gas? Something else?

It’s early in silly season. See you in ’21, wherever you are.