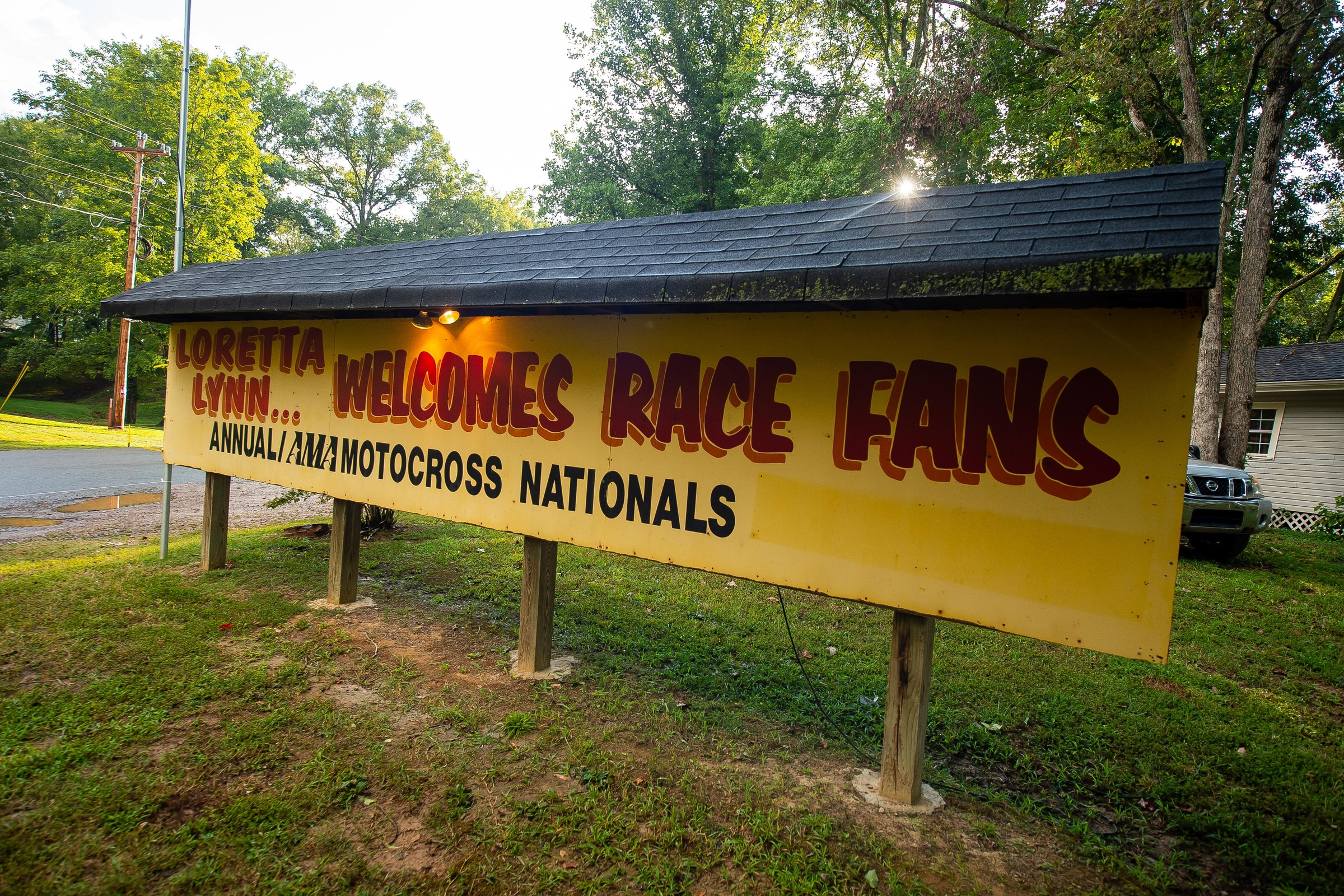 WE ARE BACK RACING! The Lucas Oil AMA Pro Motocross Championship got underway this past weekend, round one of an abbreviated nine-round series and I, for one, am happy to watch and talk about some racing again.

First up though, an admission of a wrongdoing. I thought, like more than a few others, that the Loretta Lynn’s Ranch track wouldn’t really work out. I’ve been there (a long time ago though) and I’ve certainly watched a ton of amateur races there over the years and I didn’t think the track would be very good. I was fine with that, I mean we’re in kind of desperate times so I get it but to me, the track looked easy, narrow, and has no elevation. Nothing about it screamed “NATIONAL TRACK” to me and as I said, that’s fine—I’m just glad we’re going racing. I can’t keep talking about baseball, Chick-fil-A, Quads, and whatever else on the PulpMX Show.

Well, after watching the race from my couch I have to say, it was pretty good! Track benefitted from a bunch of rain that made the first practice sessions pretty tough and then dried out during the day to give us a tough, racey track. Lots of mistakes from the riders resulted in passes and huge gaps of time gained and lost out there…which makes for exciting racing.  And I don’t know how this is possible but it also just looked (shrugs shoulders) different from the track I just watched the amateurs on a week before. Like, I couldn’t figure it out. Maybe it’s the camera angles, the prep—who knows but I thought it was a good race and better than I thought it would be. Let’s talk about a few specifics now.

[Editor’s note: Yeah, the track crew widened sections and opened up the tighter corners. Hard to even see what changed, some sections were maybe just four feet further to the right or left than the amateur layout, but putting a straightaway just a few feet further away makes the corner before it so much wider. Small changes with big results. Also, I never doubted this track. It produces amazing racing year in and year out, and yes that includes the classes with riders on 250s and 450s. Build the right lines, ruts and bumps and you’ve got yourself a race track. Thank you and good night. – Weege]

ZACH: Wow, there you go. Zach was just riding that three-month momentum (LOLZ) of getting his first 450SX main event in SLC 7 and now, his first 450 Class win as well. I’ve been high on #16’s chances this summer because, as I told him on Monday night on PulpMX Show but in a WAY nicer way, I think he’s a bit of a head case. I just mean when things are good, he’s good and when things are bad, we get the first two months of 2020 450SX. He feeds on momentum and confidence (as do most racers but Osborne I think more so) and he’s got it all rolling now. Great ride for Osborne at the ranch and can he win this 450 Class title? Yes, he can

ELI: Good ride for Eli there, the first moto was NOT what he wanted when he got passed by, are you sitting down, THREE riders to get seventh. Super weird, right? Last season, thanks to Clinton Fowler, we know that Eli was passed a grand total of six times in 24 motos. That’s it! So he’s halfway to that total after one moto! Sound the alarms? Well, no, because Tomac made some adjustments for moto two and got a strong second place. He got to within a couple of seconds of Osborne at one point so yeah, all is fine with the defending champion.

DYLAN: I mean, we all had Dylan Ferrandis pegged as the favorite to win the 250 Class title. He gave Cianciarulo a run last year and no Adam is out of the class. Now it’s riders like Jeremy Martin and Justin Cooper that are expected to give him some issues. Well, there were absolutely no problems for Ferrandis in going 1-1 on the day with big leads. He didn’t get anywhere near the start he needed in moto two and it didn’t take long before he was gone. Perhaps everyone is in for a long nine races if he can keep this up? And by the way, did you notice the starts that were there for Dylan, Cooper, and their teammate Shane McElrath in BOTH motos? Uhhh yeah, another reason why things look good for the BLU CRU.

ADAM: I know Adam Cianciarulo is tired of hitting the ground and I understand why, 1) it hurts and 2) it sucks. We saw what he did in moto two, grabbing the holeshot and pulling a lead. Then he took off a jump face without actually being on the bike and suffered a pretty big get off. He’s fine but his bike was too damaged to continue. A 6-DNF day for AC in his first ever 450MX Class race isn’t what he wanted but here’s the thing (and what I tell him whenever we chat): He’s got talent that you can’t work for, he’s a special, elite rider and sure, sometimes guys like Eli Tomac just win pretty much all the time as soon as they start, but others, like Adam, Mike LaRocco, Jeff Emig, take a while to figure stuff out before you emerge as a championship contender. AC will be there, it’s just going to take a bit to get everything unlocked. Would anyone be surprised if AC went, say, 1-3 this weekend for a podium? No.

CHASE: As in, Sexton and what a day for the rookie in the 450 class. Yeah, he got a third in the second moto which is awesome but he also qualified fastest and was going to the front in moto one when he crashed. He looked great in his first 450 National. Is it bad that I know he won a moto in 250 Class but I also can’t think of one MX race outside of that one where he was more impressive than this one? Strong start for the kid!

BAM BAM: No one will really talk about Justin Barcia and his rides at the ranch but they were very good. Strong come-from-behind third in moto one,  then he fell in the second or third turn in moto two and still got back to seventh by the end. These conditions do suit Justin and I would say they suit the Yamaha also because we saw what kind of conditions do not suit the Yamaha at SLC and these were the opposite of that! Barcia, who it sounds like will be looking for a ride on another brand in 2021, was awesome at the first round. Cool for him after a disastrous SLC SX run.

RJ: Hampshire got second overall and might’ve rode his second best national race ever and that is WITH coming off an ACL replacement. We kind of didn’t talk about him much in our pre-season shows because, duh, he was coming off an ACL replacement like four months ago! That is a quick recovery to just race, never mind have the stamina and all that to get second overall. Nice work!

#21: Jason Anderson taking off and winning the opening moto of the season with a dominant ride was very Brian Swink at Gainesville in 1994-ish. That too was the opening moto of the year and although Brian was a great rider he was better at SX than MX and he never won another moto all year long. I don’t know if Jason will not win another this year but his win in moto one was unexpected and, nevertheless, very impressive. He lost a few more spots than he probably would’ve liked in moto two but still got second overall and opened some eyes. By the way, no one ever said JA can’t ride outdoors. No one ever, ever said that. But he’s just a hair off of the elite outdoor dudes like Tomac and such, usually. So, checking out on everyone in moto one was strong.

TROLL: Great start for “us” in this championship, gotta be in it to win it, right? Alex Martin crashed once, maybe twice and still rode pretty well at the first round but I wasn’t too happy that “we” seemed to let our baby brother by in the second moto. WTF? Hard to win a title like that. I will be speaking to “us” this weekend about that.

TROLL’S BROTHER: You forget that Jeremy Martin hadn’t ridden outdoors for a looong time. He rode well to go 2-3 on the day and I know it’s only one race but he’s got to be worried about the BLU CRU machines out front in both motos. The GEICO Honda bikes are improved over years past for sure but this wasn’t what J-Mart needed to see just two motos in. Of course, he got lucky on one position when Troll moved over for him. [Eye roll emoji]

PRIVATEERS: “El Dozer” Luke Renzland was awesome in moto two and Benny Bloss was even better in moto one. Neither guy put two motos together but for Bloss to get a 10th and for Renzland to get a 12th is pretty cool. These guys are as full privateers as it comes and beat a few factory riders in their one motos of glory. Cool to see for sure, even Randy Saltine had to have been stoked.

I never saw Dean Wilson all day long but he’ll get better…Twisted Tea HEP Motorsports Suzuki has to be satisfied with Max Anstie’s 450 Class debut, almost top ten and it’s been a long time since he raced…I think that Shane McElrath is really going to enjoy the Monster Energy/Star Racing Yamaha this summer…lots of hype for the rookies at the Ranch but no one, maybe outside his family, thought that Mason Gonzales would finish inside the top ten…if Gonzales doesn’t have “Speedy” on the back of his pants, I’ll be disgusted…oh and one more thing, how long until Star Yamaha takes him from Rock River?…I really like Christian Craig but newsbreak here, it’s been a long time since he got a really good result…Mitchell Harrison was great and got screwed by having a kickstarter…Jeremy Smith has been a PulpMX Fantasy killer more times than not but there’s no denying he’s got speed and maybe now that he’s on SGB Racing/Maxxis/Babbitt’s Kawasaki and riding better, was can say it was the Honda that didn’t work for him…Justin Bogle’s DNS in the second moto was due to overheating…silly season stuff is that Ferrandis has signed with Yamaha for 2021 and Star Yamaha will run the factory Yamaha 450 effort, Gas Gas might go with Troy Lee Designs and they’re looking at Joey Savatgy, Shane McElrath, and Justin Barcia, or Barcia may go to MCR (SmarTop/Bullfrog Spas/MotoConcepts) Honda or Penrite Honda, JGRMX Suzuki looks to have that elusive casino title sponsor finally locked down…also, good job for Nick Gaines out there on the 3-D Yamaha.

Thanks for reading! Exciting to be back at the races and talking/typing about them as well. Email me at matthes@racerxonline.com if you want to chat about this race or something else.