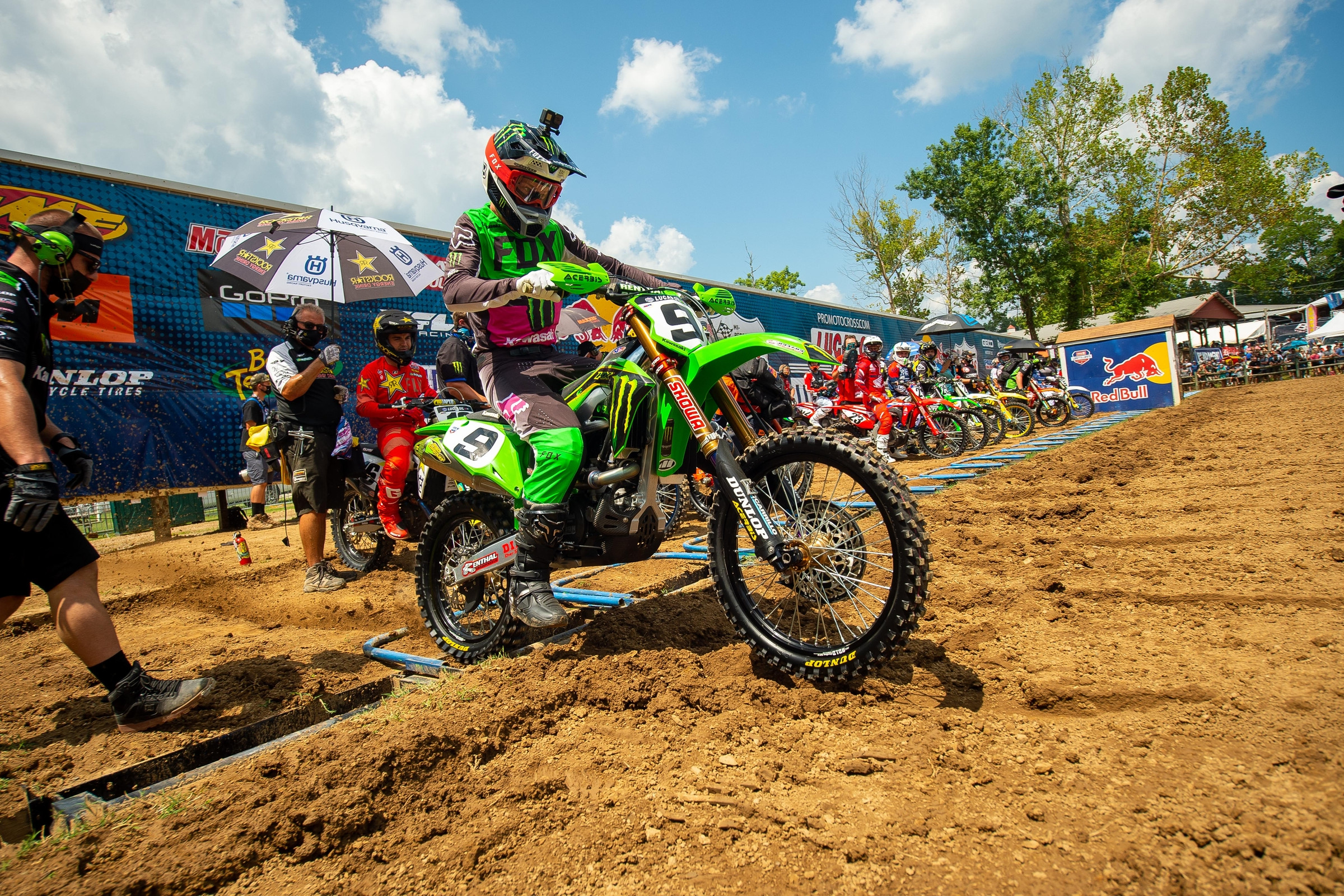 When Jason Anderson took off in the first 450 moto and completely demolished the field, it sure looked like he was going to shatter his undesirable record of never having won an overall in the Lucas Oil AMA Pro Motocross Championship. He didn’t have the same juice in the second moto and ended up sixth to earn second overall. Anderson said the track provided the tale of his two races, as he was able to get out front and ride smooth in the first race, but in moto two, while mired in a battle, the technical ruts got him, and he tightened up. Consider it the exact opposite of how Eli Tomac’s day went. A moto win is awesome, but for Anderson, who is probably beyond sick of hearing people talk about his lack of national wins, it probably felt like a missed opportunity. Anderson will get it handled eventually though, and after seeing that first moto you’ve got to think it’ll happen sooner than later. –Aaron Hansel

It’s not exactly a surprise to see Zach Osborne win the opening round. After all, he is a 250 Class National Champion and he did win the last round of Monster Energy AMA Supercross (SLC 7). The dude has pretty much been on fire lately, and judging by his strong win last week he’s got plenty of fuel left to burn. He even withstood a late charge from the defending champion Tomac, which is something very few riders can say. If he’s able to do it again this weekend it'll be a big statement for the Rockstar Energy Husqvarna Factory Racing rider. –Hansel

Justin Barcia didn’t have the best run at the final seven weeks of supercross in Utah, but by the looks of things, he’s made some big improvements since then. The Monster Energy Yamaha Factory Racing rider was 14th after the first lap of the first moto, but that didn’t deter him from smashing forward, and when the checkers flew he’d worked all the way up to third. Barcia came from way back in the second moto too, thanks to finding himself on the dirt early, and ended up seventh for fifth overall. If Barcia can improve those starts he could contend for a win on Saturday—especially on a beat up, rutted track. –Hansel

Anything less than a championship this summer will be a disappointment for Dylan Ferrandis, but if the Monster Energy/Star Racing Yamaha rider brings the same hustle to the rest of the rounds he had last week he’s got nothing to worry about. Ferrandis was ridiculously dominant from the beginning, setting a qualifying lap over three seconds faster than the nearest competitor, and following it up by sweeping both motos. Afterward Ferrandis said he felt so good at the opener he’d thinks he'll be able to go for the win every single weekend. Judging by the first race, it’s hard to argue with him. –Hansel

Adam Cianciarulo had a pretty good day going for him at the season opener. After a solid sixth in his very first 450 moto, the Monster Energy Kawasaki rider got the second moto going by putting his machine in the lead. He was looking good there too, until he got all kinds of crooked heading over a jump and found himself flying through the air with his legs high above his head. A spectacular crash ensued and Cianciarulo ended up not being able to continue because of a mangled bike. He’ll be back this weekend though, and whatever happens, it’s probably going to be fun to watch. -Hansel

Get rich or die tryin

The Monster Energy/Star Racing Yamaha bikes have been incredibly fast the past few seasons and judging from the blue wave up front in both motos last week, they’re going to be a holeshotting force to be reckoned with yet again every time the gate drops this season. That’s good news for guys like Ferrandis, Justin Cooper, and Shane McElrath, but it also means every single other title contender is going to be dealing with insane amounts of pressure when the 30-second board goes sideways. Will anyone be able to beat the blue brigade to turn one this weekend? –Hansel

Qualify fastest in your first 450 national? Check. Run the pace up front immediately? Check. Take third in a moto? Check. Chase Sexton had a fantastic showing in his first 450 race last weekend at the season opener, and despite a crash in the first moto, still took eighth overall. Afterward he said he felt he exceeded expectations, which is hard to argue with. It’s also no small thing, considering the hype that was starting to build regarding his budding relationship with the 450 as the first round approached. Now that he’s got the first race out of the way, will he be even better at round two? -Hansel

Because he hasn’t raced much lately, many may have forgotten about Hunter Lawrence, but industry insiders know the Aussie with extensive GP experience—and two moto wins here in the U.S. in 2019—is a genuine threat in 2020. Unfortunately, he never showed it at the Ranch last week due to a first-turn crash that resulted in a bike problem in moto one, which led to the 40th gate pick in moto two, and more chaos. If you see the #35 GEICO Honda up front this week, don’t be surprised. -Jason Weigandt

Now we have rookies in different stages of “rookieness.” Stilez Robertson and Mason Gonzales are fresh into the pros. Gonzales really opened some eyes last weekend with a top-ten overall in his debut, now the pressure builds for the Rock River Yamaha rider to back it up and get a ride for ’21. Robertson is locked in with Rockstar Energy Husqvarna, but his pro debut was a disaster of bad starts and crashes (similar to Hunter Lawrence, listed above). Expect him to be much better here. Then you have riders that turned pro after the AMA Amateur National Motocross Championship last year, and now in their first full pro season, like Jett Lawrence, who was solid and consistent just outside the top five, and Carson Mumford, who ran up front early in moto one. There are other newcomers in this 250 field, too, but the wait is on to see which ones hit. -Weigandt

Don’t expect any major layout changes for the weekend at Loretta Lynn’s Ranch, as the track crew never expected to host two pro races. But, the track might still seem different this time. Last Saturday’s track was defined by the rain, which soaked into the track twice leading up to the end. First, the crew ripped the prepped the track on Thursday, and it rained. Then they pushed mud off on Friday, and it rained again. It’s shocking the track dried as much as it did, but it was still slow, sticky, rutted and technical. Even if it rains again, the track will probably be sealed this time, because there isn’t any press day riding scheduled for Friday (they had ripped that track for Friday’s press ride last week). So, it shouldn’t get so deep…unless it rains during the actual motos. Then it will be much different than last week! -Weigandt