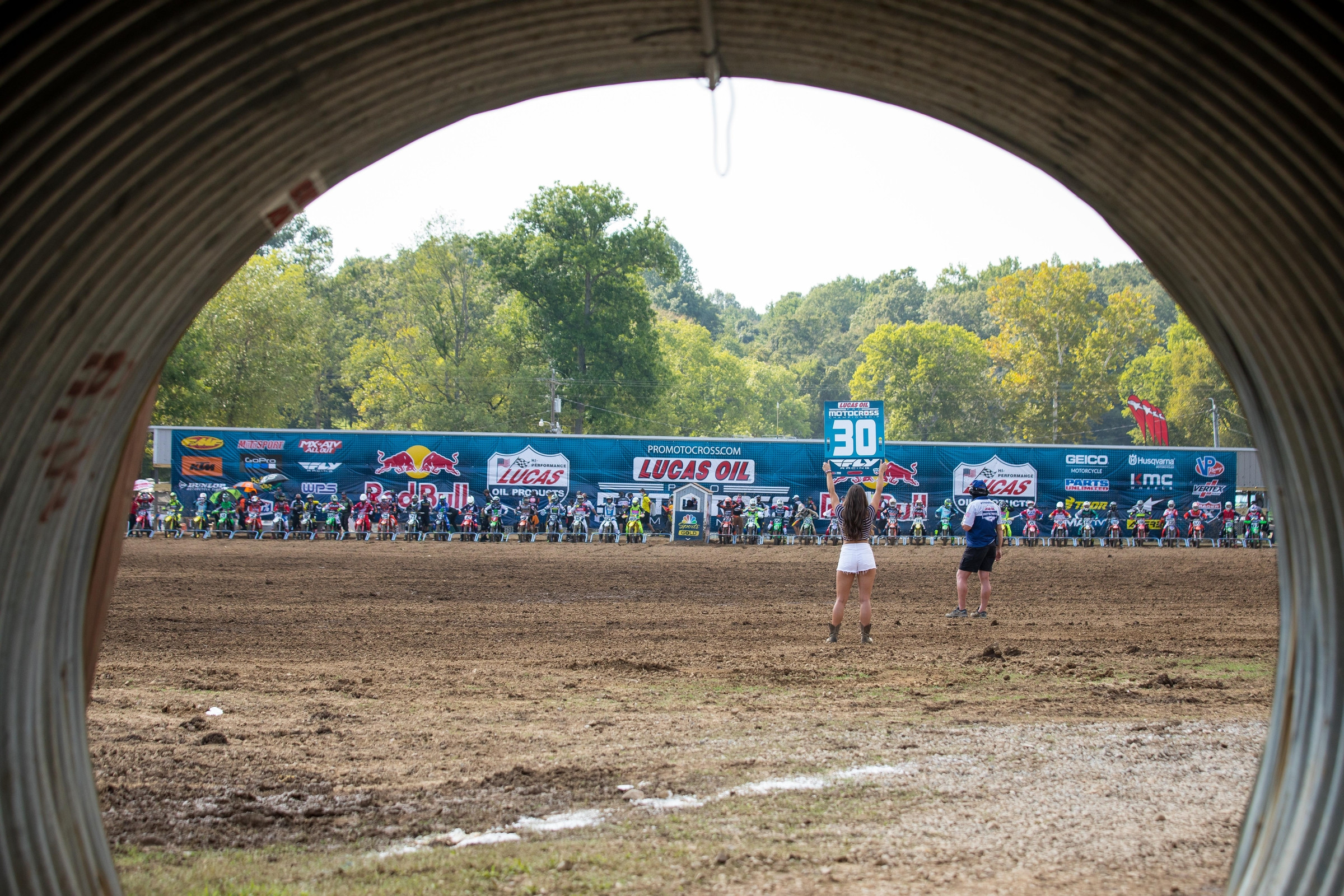 Loretta Lynn’s strikes back for round two! After an unfortunate cancelation of the much-beloved Washougal round, we’re back in Tennessee on Saturday. I don’t expect to see many track changes from round one, but maybe a few subtle modifications could help freshen up the feel. I think the most likely variable will be the weather. Last week’s rains made for a very muddy track in timed qualifying but also created a very technical, slower racetrack for the motos. The weather leading up to the race this week could again be a big factor, not to mention Saturday’s weather.

The most common talking point for the track at round one would be how an amateur-based track would respond to 80-ish of the best professional racers America has to offer. With sub-2:00 lap times expected, the crew would be under pressure to deliver a challenging track that didn’t feel too small for the moment. They accomplished that goal, but I do think the rains helped. With a 50% chance of rain Thursday, Friday, and Saturday, it’s literally anyone’s guess as to what we will see this time. Personally, I’m hoping for a drier setup in hopes of a different style of racing.

If we do get drier conditions, look for speeds to pick up and a more frenzied pace. Riders were forced to respect the track on a higher than normal level. The ruts and soft spots could catch riders out very easily, which we saw occur several times Saturday. Adam Cianciarulo crashed out of the lead due to this very reason. If your approach got careless and your aggression level got too high, the track responded and yellow flags flew.

I also think you’ll see a few different riders excel if the track is drier. Round one favored riders with a certain skillset, even if they didn’t win. We saw how potent Dylan Ferrandis was on a track that required thought and patience. Zach Osborne loves this style of track, too, but those are easy to cherry pick due to their results. A more fair example would be Marvin Musquin, although his starts kept him out of the winning mix. How a drier track would effect the results is anyone’s guess, but I do feel we will see the trends change.

Nothing is more brutal than multiple DNFs in a single moto. That’s exactly what happened in the final 450 moto for me, as Benny Bloss and Jake Masterpool both left me in tears Saturday afternoon. I wasn’t having an exceptional day as it was, but that pushed me off the proverbial cliff. Let’s take a look at a few of the highs for the fantasy world and how they might be utilized for round two.

Mason Gonzales: The rookie came out swinging with 9-12 scores, racking up 94 points for his team owners. We might have missed the value window for Gonzales.

Mathias Jorgensen: With only a 1.5% pick trend, Jorgensen wasn’t a popular pick, but he certainly rewarded his friends and family. His 78 points were the pride of ... [checks notes] Denmark. This one is still dicey for me unless you’re dead certain that Jorgensen delivers again.

Nick Gaines: I had Gaines on my team until I saw him drowning in the Mud Hole of Death on Saturday morning. Pulling him was a big mistake, as he racked up 72 points. Gaines will have less value after a solid day, but I still think there is enough here if you’re so inclined.

Jett Lawrence: I pulled Jett off my team in favor of Carson Mumford with a few minutes to spare, and it cost me four points. He will be an all-star at round two, so his upside window is limited now.

Hardy Munoz: I picked Hardy and he did okay. He was doing very well early in both motos and slowly faded back, which has me a little down on the overall performance. He should be a good pick on Saturday.

Jeremy Smith: A hot topic leading up to the event, Jeremy Smith’s qualifying time was hard to ignore. I have watched him closely over the years and have seen too many DNFs to trust the #309. Solid day for anyone willing to ignore past results, though. I don’t think I’ll be picking him at round two, but there could still be value here if he can back up his opening-round success.

Read what Smith had to say about the season-opener in Kellen Brauer's Privateer Profile interview with the New Jersey native.

Luke Renzland: The first moto was what I expected, but he really made it happen in the second. His 76 points were good enough to be the second-highest scorer in the 450 Class. Nice job for El Dozer. He is on my tentative team for round two.

Dalton Dyer: I don’t know much about Dyer, but that’s my favorite aspect of PulpMX Fantasy. Obscure riders get notoriety and become relevant over time. I could see Dyer making several teams this Saturday.

Joey Savatgy: He was on my team most of Saturday morning, but I ended up bailing in the frantic lead-up to 1 p.m. local. I had bad memories from 2019’s DNF bonanza. My questions about Joey are typically not about his riding, only if he will finish. I might give him a look this coming Saturday.

Monster Energy/Star Yamaha somehow holeshots every moto on Saturday, including both consolation races and the 450 motos.

Steve Matthes makes his return to Loretta Lynn’s Dude Ranch after a 22-year hiatus. He vows to not return until 2042.

Gas Gas is rumored to be hiring over half of the paddock for 2021. The other half will be at Monster Star Yamaha.