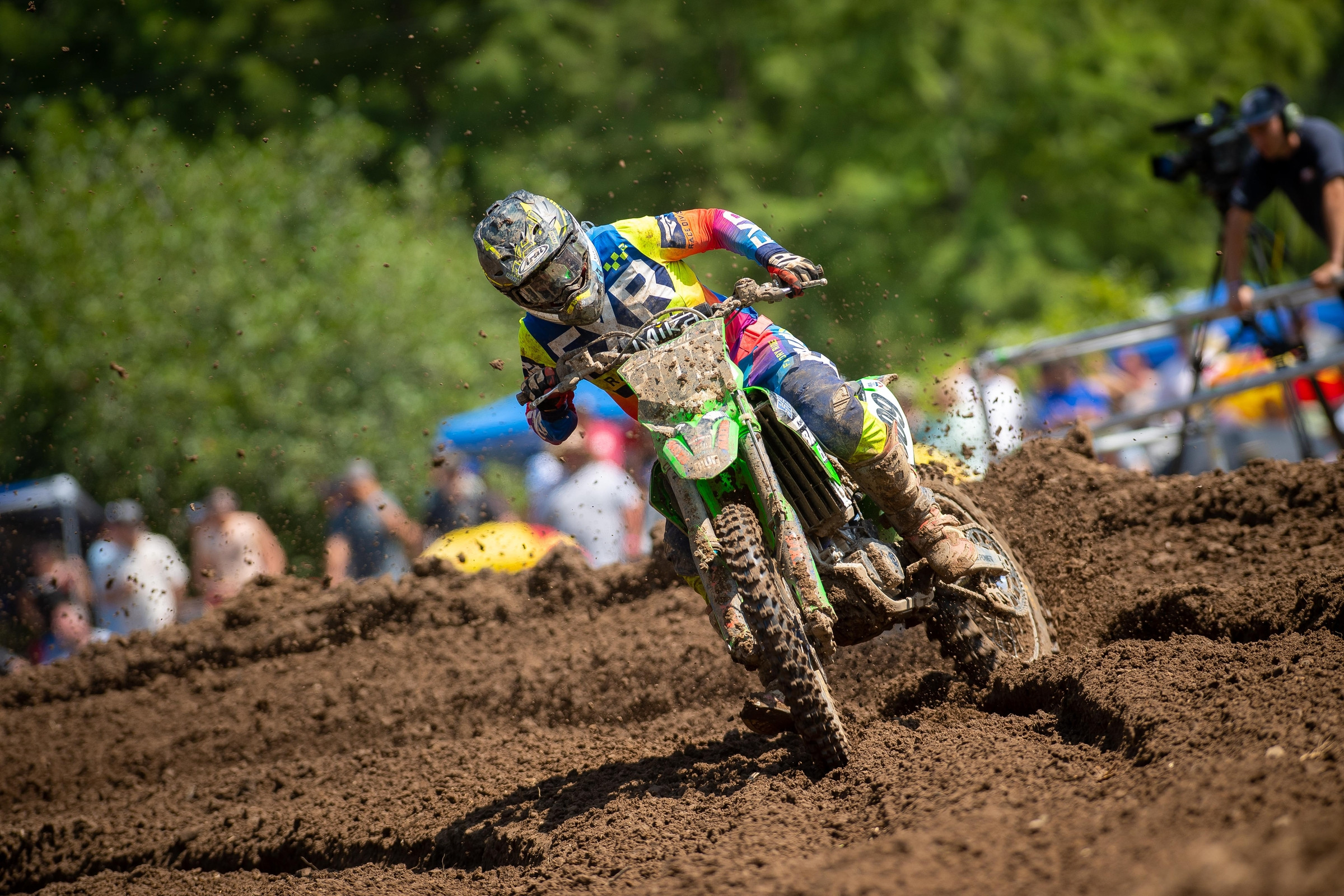 One of the less-talked-about surprises from the opening round of the Lucas Oil AMA Pro Motocross Championship was Marmora, New Jersey’s Jeremy Smith. The SGB Racing/Maxxis/Babbitt’s Kawasaki rider put together 18-16 scores to finish 17th overall in his first ride with the new team.

Smith has shown flashes of speed here and there over the years, enough to catch the eye of some PulpMX Fantasy Motocross players looking to make up big points, but this year he has a higher level of support than ever. With a team behind him, a steady climb back to full health from an injury, and a new level of confidence, Smith is looking to turn some heads in this shortened motocross season.

We caught up with him this week to hear his thoughts on the weekend.

Racer X: First off, congratulations on the ride. It had to be nice to open up the season with two solid motos in the points, I’m assuming?
Jeremy Smith: Yeah, that was great to get points in two motos. I don’t think I’ve ever done that before. I’ve either done one good moto and then one bad moto, so to start out with eight points on the day is awesome for me.

This year you didn’t do supercross at all. Obviously, things aren’t exactly like a normal season, but do you feel like only having to focus on outdoors helped a lot with preparing for the season?
Yeah. Last year around this time I got shoulder surgery. So that took about six or seven months to recover from that. The SGB team wanted me to do supercross, but I just wasn’t ready in time. So, I told them I would focus up on outdoors and get as ready as possible for that. They set me up a deal for outdoors and said, “Let’s do it.” I had plenty of time to train and get ready. I feel like this year I’m the best shape I’ve been in. I don’t want to be known as that guy who can just be a good qualifier and then suck in the race. I’m trying to be the guy who can qualify good and finish good.

What was the preparation like? Obviously not knowing really exactly when the season would start. Did you have certain goals of getting back to shape and race speed that you were hitting each month, or did you just have an end date that you wanted to be back to 100 percent?
It was hard because at the same time you don’t want to over-train. So, when it got canceled multiple times, it kind of kills your motivation. And around me there’s not many people I ride with, so doing motos by yourself gets really old. I kind of just struck through it and just kept grinding. I’d say it paid off but at the same time you got to keep going. You don’t want to wear yourself down too much. So that was pretty tough, not knowing if I should train harder or back off. I didn’t really get to race much. There were a few local races I did and that was about it. But those are super short races, so 30 plus two is a whole different game.

How has everything been so far with jumping over to the Kawi and the SGB Racing squad? How has getting the bike setup worked and how has the team dynamic worked with you?
The team is awesome. I got on the Kawi about probably five months ago. At first, I was a little skeptical on it because I’ve always been a Honda guy, but once I got used to it, I liked it a lot more. It’s almost easier to ride for me. I’m not using as much energy. The Honda is an awesome cornering bike, but something with the power and just how it is didn’t really work for my style. I can just ride the Kawi longer and it’s easier for me. So, I like it a lot better.

Did I read this right that you’ve only been to Loretta’s once ever before this?
Yeah. I only went one time. I think it was 2011, so almost nine years ago. So, I did that in supermini. I think I got 12th overall then. Then after that I kind of got hurt a few years and said, screw it. It’s not worth waiting a whole year just to get hurt for one race. So, I kind of moved up to A pretty quick and then got my license and did that.

A lot of the guys around you obviously have been [to the Ranch] many years. What do you think it was about the track or the environment that day? It seemed like everything clicked from first practice for you.
I watched the amateur race a lot, so I tried to figure out some lines through that. The track really hasn’t changed that much. It’s one of those tracks where you see what’s in front of you and you just know. There’s no blind jumps or anything. I actually even hopped on MX Sim and did some laps on that! So, I’d say that helped too.

The end result of the day was obviously really good, but I do have to ask you about coming together with Jason Anderson in practice. What happened from your perspective there?
It was about the second lap of practice. Obviously, we were both going for heaters pretty soon. He kind of went wide and I went inside. That was where the super deep rut was, so I kind of hopped out of it. He was on the outside and slid out and cut down. So, as I was sweeping wide, we kind of just hit. Then he ended up looping out. He was definitely mad about it, but it was kind of like a racing incident. He could have let off too. I could have let off too. It just happens. I know he was a little mad about it, but nothing you can really do.

I saw that he kind of yelled at you a little bit on the track. Did you go up to him or did he go up to you after the practice and say anything? Or was it just done and dusted from there?
No. I heard him yelling at me, but I didn’t really get any words out of it. I was still focused on getting another lap, so I just kind of ignored it and went on with it. An AMA dude did ask me about it and I just said that’s what [explained what] happened. He was like, alright. Nothing you can do about that. I didn’t really mean to do anything, obviously. I don’t know if the team told him or something, but who knows.

Did Husky go to the AMA and say, “That 309 guy, he’s out there taking out our guy in practice.”
That’s what I’m thinking. There’s a video out there, and I don’t really think it’s that bad, but I guess from his view he thought I just purposefully T-boned him. I don’t think it was that bad at all. Muddy track, ruts going everywhere. It happens.

I wanted to know your thoughts on having another race at Loretta’s. Were you looking forward to going to Washougal, or are you happy that it’s kind of staying on the East Coast again?
I was happy to go to Washougal because I’ve never been on that side, all the way up to Washougal. At the same time, it’s better because I think one of my team drivers, he was just going to go by himself. So that would have been rough for those guys. I can drive home too and just drive back, which is still pretty far but it might be better off just staying here because it’s just less work for everyone.

You’re basically pitting out of a semi now; which I don’t think you had done before. You have more of a team behind you. Mentally has that helped you at all with going into the races knowing that there’s more support and help for you at each round?
Yeah. I think it helps a lot because [the] SGB [owner] is a suspension guy so he’s there at every race. If I need any help in practice or anything, he can be onsite, and I can just change clickers or anything like that. At the same time, I have a mechanic and before I was basically doing everything myself every week. It kind of beats you up after a while, and you got to worry about your bike and all these parts and all that. Like right now, I just kind of focus on my racing more instead of, what if the bike is muddy, or clutches, stuff like that.

What were your expectations going into this season for you? Now that you kind of started off on the right foot, what goals are you setting for yourself moving forward?
I want to be in the top 20 every moto. If you look at the list, it’s pretty stacked. Now that I did that one race, I feel like I can do that every single race. There’s about 18 factory guys out there, so it is going to be tough. I think where my times are at, and if I can push the whole moto, then I can be right up there with some of those guys.

Did you feel like, knowing your preparation level and everything going in, that on some level you exceeded expectations, or did you end up kind of right where you wanted to be all along?
I was where I wanted to be, but the second moto was pretty rough. I got off to a top-20 start. That track was insane. It was so rutted and bumpy. My body was just feeling it, big time. I guess everyone else was too because I didn’t seem like I was getting blown by. I know even [Zach] Osborne said it was one of the hardest races he’s done in a while. So, it was tough out there. I hope it’s a little better this week. I’m still sore to this day. This week I didn’t even want to ride too much. I rode a little bit yesterday, but just a tank of gas and call it a day. I don’t want to overdo it before a race.

Who would you like to thank for getting you to the races this year and helping out along the way?
Just the whole SGB Racing/Maxxis/Babbitt’s Kawasaki team. They gave me a great opportunity this year. I almost wasn’t going to race but decided if I’m getting help, I’ve got to try it one more time. They gave me a great opportunity to race again. FXR, my family. That’s about it.