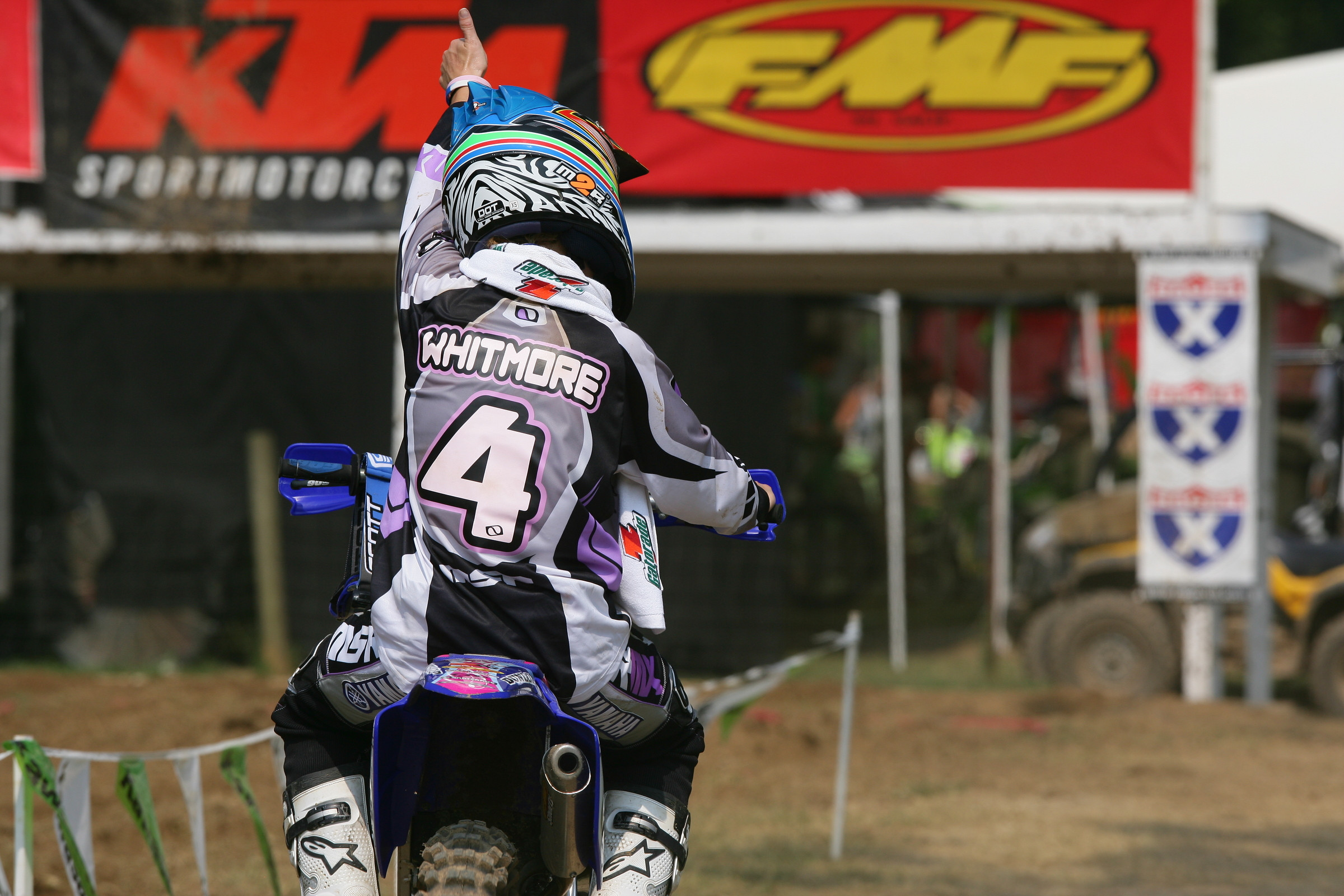 The Women’s class offers great battles almost every year. Sarah takes us through her memories of the drama.

I’m about 20 years into going to what’s now called the Monster Energy AMA Amateur National Motocross Championship at Loretta Lynn Ranch. After all those years of watching, there’s no doubt in my mind that the Women’s class offers up the best battles. When you get a year when two or three riders in that class are evenly matched, the action is going to get crazy in the final moto. There’s a saying that goes “hell hath no fury like a woman scorned.” Well, when the racers in the Women’s class have a title on the line, they will push so hard, and dig so deep, to win.

And yes, sometimes the rivalries spill of the track and become deeply personal. We asked Whitmore about it last week.

Racer X: This is your dream come true. We’re going to relive the glory days of the gnarly battles at Loretta’s. So specifically, it usually came down to you and Jessica Patterson, and you won twice?
Sarah Whitmore: I won twice.

So that was Bau at first, and then Jessica twice?
Yeah. Jessica twice. Stefy was in there once. I’m not sure what the order was.

So you were getting motivated by getting tired of these seconds?
Yeah! Who likes second place? Second sucks!

So take me through ’03, if you remember how it all shook out. To me they’re all a blur of last lap crazy drama every year and I couldn’t tell you which year was which. The Women’s class always offers some amazing battles.
It came down to… I won one of the motos. Jessica won the other moto, so we go into the last moto tied. It was the same thing as in ’02. We were both tied going in ’02 to the last moto, and she ended up just barely edging me out. We passed each other back and forth a bajillion times, but she got the edge on me in 2002. So in 2003, same scenario. I’m riding behind her, I think three laps to go. In the women’s class, the skill level is so diverse, so we do get a lot of lapped traffic compared to the other classes. So we come into the left-hander around the billboards and there’s three lappers ahead of us. So there’s five of us in this turn! I was really good friends with Katrina Wilson, who happens to be Dean Wilson’s sister, so this makes the story even better now. I was like, I know Katrina. She’s a good rider. I’ll follow her. You never want to follow a lapper, but there’s two ruts in the corner and nowhere else you can go. She freaking crashes! The rut is deep enough that I try to wheelie, but unfortunately this is a long time before I ever started dating and got married to a trials guy and practicing wheelies. So I tried to wheelie but the rut was so deep that I hit her bike, and fell down. It’s three laps to go. I get up and I’m so angry. I’m like swearing at myself in the helmet.

What about Katrina?
I was fine with her. I don’t curse at my friends. If it was somebody else. Like when I raced GNCC, when the women got dropped second or third row I would, definitely, when I was trying to make passes! But my friend I’m not going to swear at her. I was mad at myself. Under my helmet, I’m like, “You suck! You’re getting second place four years in a row! You don’t even deserve to own a dirt bike!” Just totally beating myself up, because if you get second it’s not even worth riding, at least the way I thought about it at the time. So apparently I was just really angry. The announcers even called it. As soon as I crashed, “This race is over! Patterson wins! Patterson is our champion!” And in two laps, I had caught her, passed her, and I think she really did just think she had it won.

You don’t know of a crash or anything or a bobble?
No, she didn’t crash. I think she just kind of was like, she knew I went down and she had this in the bag. Riding safe. Then all of a sudden I started riding better than I had all moto. Caught her. Didn’t even give her time. As soon as I caught her, I passed over the finish line as we were getting the white flag. Led the final lap and got it, and balled my eyes out. I was like, “Yes! You don’t suck. You don’t have to sell your dirt bikes.”

I have to ask the classic question here: so how did it feel?
[Laughs] I was crying so hard. That’s when they were on the podium, “There’s no crying in moto.” I’m like, “That’s baseball. Motocross is way harder! I’ll cry if I want to.”

Your podium speeches were always epic after these dramatic battles.
[Laughs] I think you just liked them because I’d always kiss you, because I’d be so excited.

[Laughs] Yes, and I said, “This is the only class where the riders are allowed to give me a kiss on the podium.” Okay, so then the next year you were sad sack sitting on the fence, so depressed looking.
Oh, yeah. I ended up getting really sick with Epstein-Barr. At Mammoth, I thought it was just the elevation had got to me. Back then when the nationals raced on Sunday, the women had to race Washougal on Sunday, then we had to take a red eye flight, fly to Loretta’s, and then practice Monday. So we did that for I don’t know how many years. It was at Washougal. I’m in top three and then just started fading, fading, fading, fading. If you can’t go a 15-minute moto in Washington weather, it’s probably 65 degrees and perfect, there was no way that I would have made it through Loretta’s. So we still ended up flying back to Loretta’s. I hung out all week. I was just so sick. There was no way I could race.

Did you know what was wrong, or you just knew something was wrong?
No. I think Doc Bodnar or one of the guys said it’s either chronic fatigue or Epstein-Barr, something. It’s not uncommon for riders to just kind of push yourself into the ground. Now looking back, I wish I knew now as far as nutrition and any of that stuff. So they were like, your blood sugar is low. They’re just giving me orange juice with sugar added.

That’s not what you do?
[Laughs] No. That is terrible! Sugar is the devil. So, ’04 I just got to sit and watch. That was when Tara [Geiger] was coming up. I think she won in ’04 when I was sick. So at that race in Washougal in 2005, she ended up breaking her neck. I remember in the hospital room, because we were teammates and friends, and I go and she’s just like, “Go kick her ass.”

Yeah so that’s how Geiger and Patterson felt about each other?
Yeah. There was no love lost between those two.

Did you get that gnarly?
Honestly, Tara and I got along real well on the track, but she would not think twice to run it in on me and take me out. She’s super aggressive. Patterson and I, we might not have gotten along too well off the track. She’s really quiet, really reserved, and I’m super outgoing. So I knew it would piss her off. So I’d be like, “Hey, Jessica! How’s it going?” Every single time I saw her. But she always raced me clean, always. So I really respected her for that because honestly she didn’t do that to everybody, but I raced her clean and she raced me clean. It was good because I was a twig back then!

So ’05 then. You won it again, probably another mega-battle because it seemed like that every year.
’05… I’ve had so many concussions. ’05 is a blur! I know that I won. I know that I rode a 250 two-stroke that now looking back was just the dumbest thing.

What else could you have done, though?
The women’s class was open, so you really felt like Patterson is going to show up on the 450. In ’04 I would have raced the 250 four-stroke. Those Yamaha’s in ’04 were beasts. They were not the best. The steel frame. Those were horrible. So you just kind of felt like, if everybody else is doing it… Looking back, Loretta’s is so tight. Other than the holeshot, you don’t need the power. I had the 250 two-stroke and I honestly don’t remember the moto finishes. I’m sure it was a super great battle. There was actually a really great photo of Eddie Ray, Patterson’s mechanic [and now husband], and my dad. Those two were like buddies. It didn’t matter how Jessica and I got along. Those two actually respected each other. There’s a great shot of the mechanics area. It’s tight. My dad is this little guy. Eddy is a super big, tall guy. They’re trying to pit board for us, and we’re racing so close that we’re side by side every single time. So if you’re standing in front, you’re blocking the other guy’s pit board. So my dad is down low kneeling and Eddy is standing up over the top of him and he’s holding onto my dad. So that was really cool.

That was a tough one. She was good.
Even that, that’s one of those things when you find out, once I started riding for KTM they told me she was riding a 200 that whole time with a 125 pipe on it. I was like, no wonder!

Do you feel like Loretta’s worked for you, or was it just circumstances that always worked out there?
I don’t know. It was just something special about Loretta’s. The track, the pressure, the heat… Even though I was a Michigan girl, I trained hard and I just could handle that pressure and that three-race format where everybody else decayed. If people go in complaining that it’s hot, I would never do it. Even to this day, I will not complain when it’s too hot. I complain all winter long that I’m too cold. But in summer I’ll say no, I love the heat, I love the heat. I think it’s a mindset going into Loretta’s. If you go in thinking you’re going to struggle with the heat, then you’re going to.