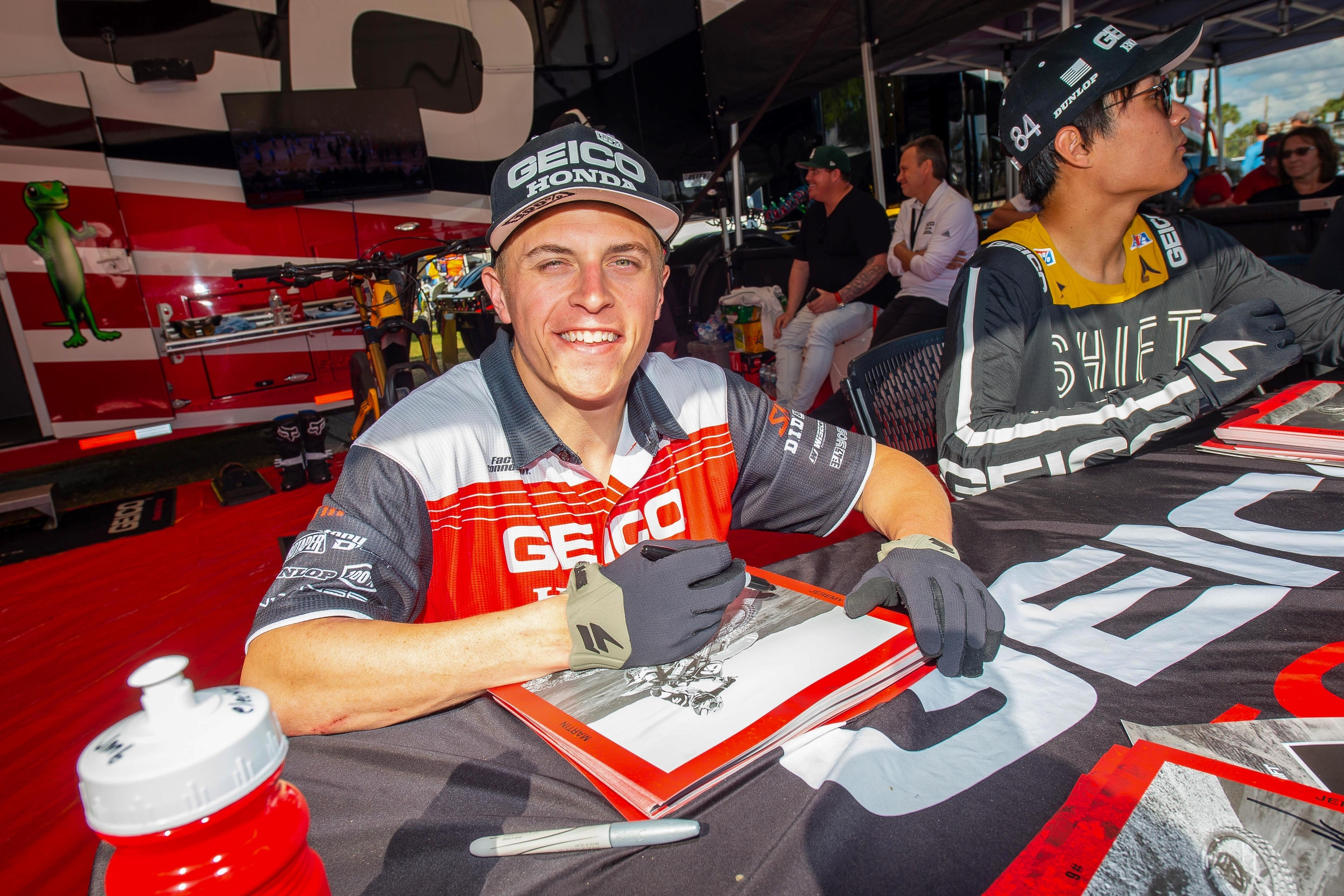 Recently, a guy from a big energy drink brand asked me if I knew the TV ratings from the Salt Lake City Supercross races. He didn’t know where to find them. The team he sponsors obviously must not be sending them to him. That summed up everything.

More on that later. For now, let’s talk about Jeremy Martin admitting he took a dive to stay in the 250 class for next year.

“To go to the 450 class in supercross after not even nipping on the heels of winning races in the 250 class, I can’t think short-term like that. I wouldn’t be able to get a ride, so it would be a terrible move for my career,” said Martin.

With that admission, 250 supercross pointing-out rules could now be discussed openly, to the point where Martin and Shane McElrath got into it on social media. McElrath skipped races last year to stay in the class, while Martin said at least he didn’t fake an injury like McElrath did, only for McElrath to counter and say he actually had a back problem. Martin apologized. However, it’s possible McElrath could have nursed the back injury through a few more 250 races in 2019, probably getting sub-par finishes. For those efforts, he would have finished inside the top five in 250SX West points, which is not considered good, and then scratched for a poor-paying ride in the 450 class. Instead he took another year in the 250s, a ride with Monster Energy/Star Racing Yamaha, three wins, and a bunch of podiums. Much better move.

“It’s easier to win in the 250 class, so if you go to the 450 class, and you’re not running near the front, some guys feel they can make more by getting podiums or wins in the 250 class from a bonus standpoint,” said Adam Cianciarulo recently on the PulpMX Show, stating what everyone already knows, but out in the open.

Don’t hate the players, understand the game. Riders all think they can succeed in the big class, but reality bites: Cianciarulo was fast this year, but the results were uneven. It took Zach Osborne lots of bumps and bruises to get to the top, and it looked very shaky at times. Aaron Plessinger is stuck in the mud now, but not the kind he actually likes, and Cooper Webb was in the same spot two years ago. No matter how good you are in the 250s, there are no guarantees in the 450s.

That’s just competition, and every sport has it. The problem is that this industry sees a 250 win as more valuable than a 10th in the 450s. This is not the same as other motorsports. The 10th place MotoGP rider has a higher profile than the winner of the Moto2 class. The 10th place NASCAR driver has a higher profile than the Xfinity Champion. That is not the case here.

Here, we talk about TV deals, exposure and outside sponsors, but in the end, this remains a sport propped up by OEM factories paying salaries and bonuses. Their goal is to prove their motorcycle is the best. If you’re Yamaha, there is little value in paying someone to get beat by nine other 450 riders. There’s a lot of value to paying someone to take your 250 to the top.

This seems obvious, but other motorsports see winning as a good thing, but not the only thing. Sponsors on a race car might not even be involved with the performance of the vehicle. Also, a lot of the budgets in racing just come from rich people who enjoy being around it. As long as they’re happy, everyone is happy.

Ally Bank doesn’t sponsor Jimmie Johnson’s car to prove it builds faster cars. They don’t even build cars. No one actually buys a Mercedes because they think they’re buying Lewis Hamilton’s car. These are spectator sports, and sponsorships are advertisements. For Mercedes, R&D in Formula 1 can train smart young engineers in a fast-pace environment. It’s worth the spend in a variety of ways.

So, you have other motorsports bringing in money from A) companies that don’t have to win to prove themselves B) rich guys who just want to be part of the big show C) research and development at the highest level.

Supercross and motocross are still on the “win on Saturday, sell on Sunday” model, which NASCAR, by the way, abandoned decades ago. Eli Tomac’s Kawasaki looked good this year. Hmmm, how about that 2021 KX450?

The other budget-builder for factory motocross is simple pride. Motorcycle companies are racing companies. They want to be winning companies. TV ratings? Exposure? Whatever. We. Just. Want. To. Win. Yes, we now have energy drinks helping to pay the bills. But these are still factory race teams, run by factories.

Those other motorsports deliver bigger audiences both in person and on TV. They are pure entertainment. The sheer exposure alone leads to massive gains in sponsorship deals, to where the 10th place car in the top series indeed does bring in more income than the first-place car in the lower series.

And another thing: some of those series have more parity. We’ve had good racing lately but three riders, Tomac, Roczen and Webb, combined for 15 of the 17 wins in 2020 Monster Energy Supercross. If you prove your product by winning, there’s not a lot of room. The tenth-place NASCAR driver could be the winner next weekend. Big difference.

My guy Steve Matthes hates the 250 rules and has even suggested cutting TV time for the small class to reduce the incentive to race there. That won’t work. Teams aren’t paying based on TV ratings. They’re paying based on the internal satisfaction of winning. I guarantee you no one at Yamaha, Star Racing, Monster Energy, THOR or any other brand that sponsors McElrath looked at the TV exposure for his wins, then did a big Return on Investment spreadsheet to figure out profit and loss. I know that teams aren’t feeding a steady diet of sponsorship exposure info to the sponsors. They just know winning is great. Also, remember, manufacturers do sell 250cc motorcycles. They need to race’ em and prove ‘em. They don’t “sell” the lower-tier equipment in other racing series on the showroom floor for average customers to buy.

There’s an argument on the other side. Why even have pointing-out rules? Doesn’t that just hurt a rider’s chance to make money? Doesn’t it ruin his career to force him up?

Well, with an economic structure that makes both classes so close in value, it would be too easy for someone to become a 250-class lifer, and thus suck up the money, wins, and titles from younger riders. You need to have some sort of mechanism to prevent someone from exploiting this model forever, or you’re going to have 25-30-year-olds winning every title and the 18-year-olds never getting a chance to break through. You want to see Austin Forkner against Chase Sexton, not against Justin Barcia or Blake Baggett.

There isn’t a perfect rule for this, but there has to be some sort of rule. We can name the few exceptions where this rule messed something up, but we ignore all the times when the mechanisms work perfectly, and the right riders move up at the right time, which is actually the case much more often.

So, in the end, the problem isn’t riders taking a dive, or manufacturers supporting it. All economic models are incentive-based. Until this sport gets so big that the money comes from exposure as much as performance, the economics of the 250 and 450 class will never change. Winning in the 250s has more value than struggling in the 450s. The money in this sport is based on performance. Just being honest about it.