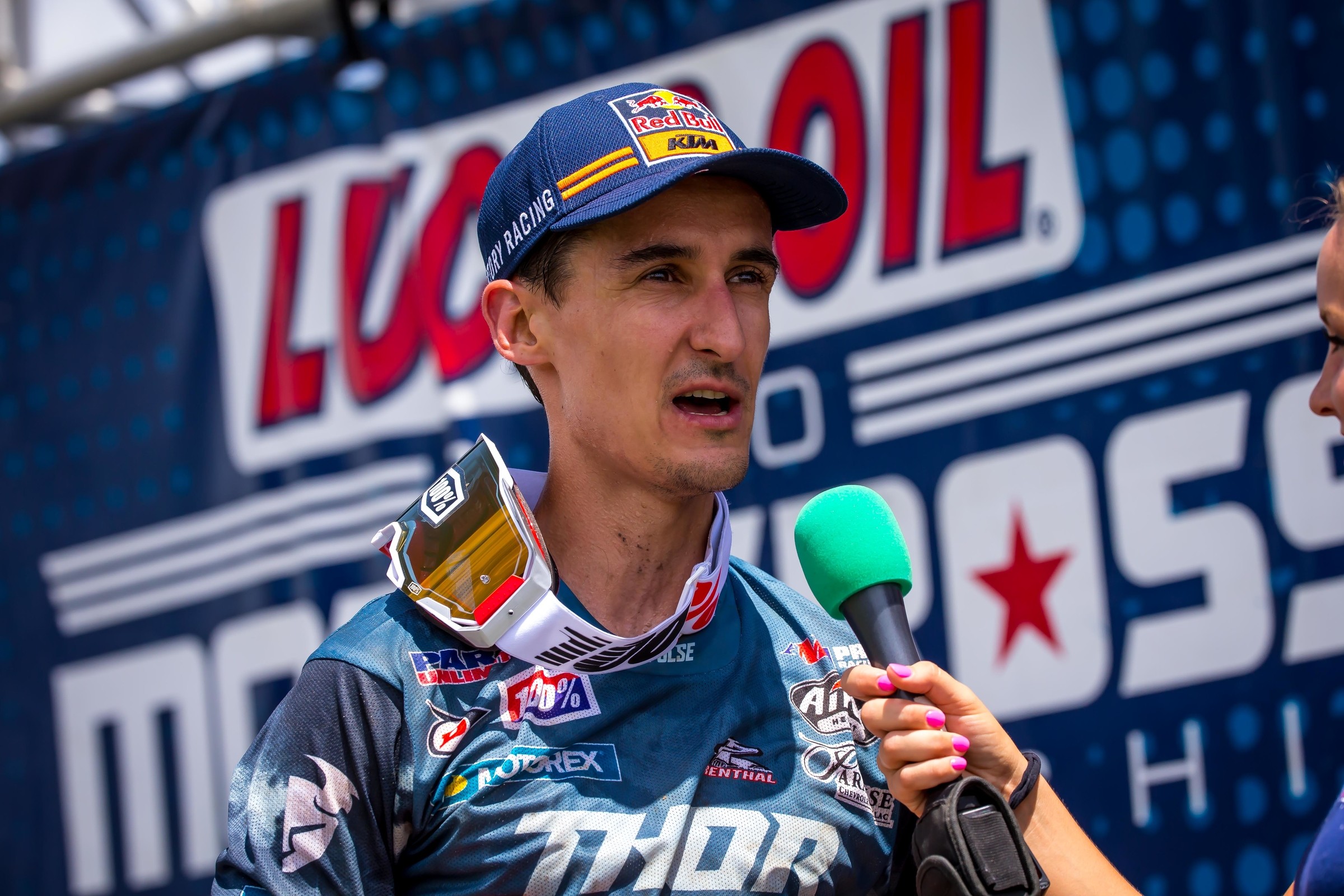 Return of the Champ

Due to a broken heel suffered at the Daytona Supercross, we haven’t seen how the 2018 250 Class National Champion stacks up against the big boys in the 450 Class yet. That’ll change this weekend when Aaron Plessinger makes his return to racing. You might expect him to take it easy in his return, but in an interview we did with him before High Point he said he’s feeling better than he’s ever felt coming back from an injury, and when he comes back he wants to be able to stake his “place in the hunt for a podium or a win, even.” With an attitude like that, things could get interesting when Plessinger lines up at Southwick! - Aaron Hansel

To say the extreme heat and humidity took its toll on the riders would be an understatement. Plenty of riders didn’t finish the second moto, and Chase Sexton, who won the first moto, wasn’t able to even compete for the second! Now, just a single week on the heels of one of the most torturous races in recent memory, the riders will return to battle in Southwick, which has the potential to get rough and nasty in its own way. We even had Sexton’s trainer weigh in on various recovery steps between tough races. Who will be ready, and who will still be feeling the effects of racing in last week’s lava pit? –Hansel

We knew it was coming sooner or later, so when Justin Cooper won the first pro national of his career last week in Florida, it came as a surprise to nobody. Interestingly enough, the Monster Energy/Yamalube/Star Racing Yamaha rider did it without winning any motos (2-2) and by staying strong in the second moto, something he’s struggled with somewhat so far this season. Now that he’s got that first one out of the way, will we see more of the same from Cooper this weekend? –Hansel

Eyes off the Rearview

It’s weird to think of third as an off-day, but after Adam Cianciarulo started the year with four straight wins, the final step of the podium was indeed not ideal for the Monster Energy/Pro Circuit Kawasaki rider. Afterward Cianciarulo mentioned he thought maybe he’d trained a little too hard during the week leading up to the race. He went on to say that whether his result is good or bad, he’s gotten better and putting it behind him and focusing forward. We’ll see how that translates in Southwick, where he’ll be coming off his first loss of the season. –Hansel

Seeing Dylan Ferrandis up front is nothing new—he won supercross races earlier this year and won four motos last year in Lucas Oil Pro Motocross. Yet somehow Ferrandis went through the first nine motos of the season without winning. That changed in the second moto in Florida, when Ferrandis won his first moto of 2019, which just happened to be the toughest of the year. With Lucas Oil Pro Motocross heading to Southwick, where Ferrandis won the overall last year, it wouldn’t be surprising to see Ferrandis back on top of the box. –Hansel

Is what RJ Hampshire has got to be thinking after yet another weekend that didn’t go his way. Hampshire has been fast but other than a fantastic first moto at Fox Raceway at Pala and qualifying fastest at Thunder Valley, it hasn’t really shown in the results. The trend continued in Florida, where Hampshire, who said he felt good all day, crashed in the first moto while charging through the pack and got caught up in a pileup in the second turn. If Hampshire can avoid hitting the dirt, and the black cloud that’s been following him around, we just might get to see a glimpse of his potential in Southwick. -Hansel

Although there are plenty of locals who regularly drop jaws with their lap times due to an intimate knowledge of the track, we’re actually talking about Eli Tomac here, who is very, very good at Southwick. In fact, the worst he’s ever finished there is second overall! In the last five times he’s raced there he’s won three times (twice on the 450 and once on a 250), which makes for a pretty good record in the sandbox. In 2016, he wasn’t even having his best season (Ken Roczen was dominating the 450 Class all summer) but Tomac came through for the 1-1 at Southwick. If he’s clicking this weekend don’t be surprised if his Southwick streak of brilliance continues. –Hansel

You know Zach Osborne is doing well. A close look at his numbers reveals an average points score of 18.2 (of a possible 25) points per moto, and has an average finishing position of 3.9. Although Osborne almost assuredly wishes it was better, those are excellent numbers, especially for his first campaign on the 450. After another podium in Florida, Zach mentioned the last step for him is to improve his sprint speed on the first three laps—he looks like a hero charging late but that’s partially because he’s digging a big hole at the beginning of the motos. So now he’s focused on fixing the beginning. Anyone think he’ll win one of these things before it’s all over? -Hansel

The only thing surprising about Marvin Musquin winning in Florida is that it didn’t happen earlier. After all, Musquin is a proven winner and has been a strong contender for the last few years. Had he not had that big crash during practice at Hangtown, this win just might have come sooner. But, better late than never, and with the series heading to Southwick, where Musquin won last year, the Red Bull KTM rider has got to be feeling good about the possibility of going back-to-back. –Hansel

Following several outstanding top-ten moto scores in a still-healthy and competitive 450 Class, privateer hero Fredrik Noren is getting a shot at factory equipment via the JGR/Yoshimura Suzuki Factory Racing team, which needs help after Justin Hill went down with injury, and fill-in Kyle Chisholm struggled while coming off the couch at High Point and Florida. Freddie is ready, but how well will he adapt to a Suzuki after years on Hondas? If you’re JGR, you have to know there’s a risk here, and you don’t want to see a privateer get slower once he jumps on your factory bike. We’ll see how it goes this weekend. -Jason Weigandt