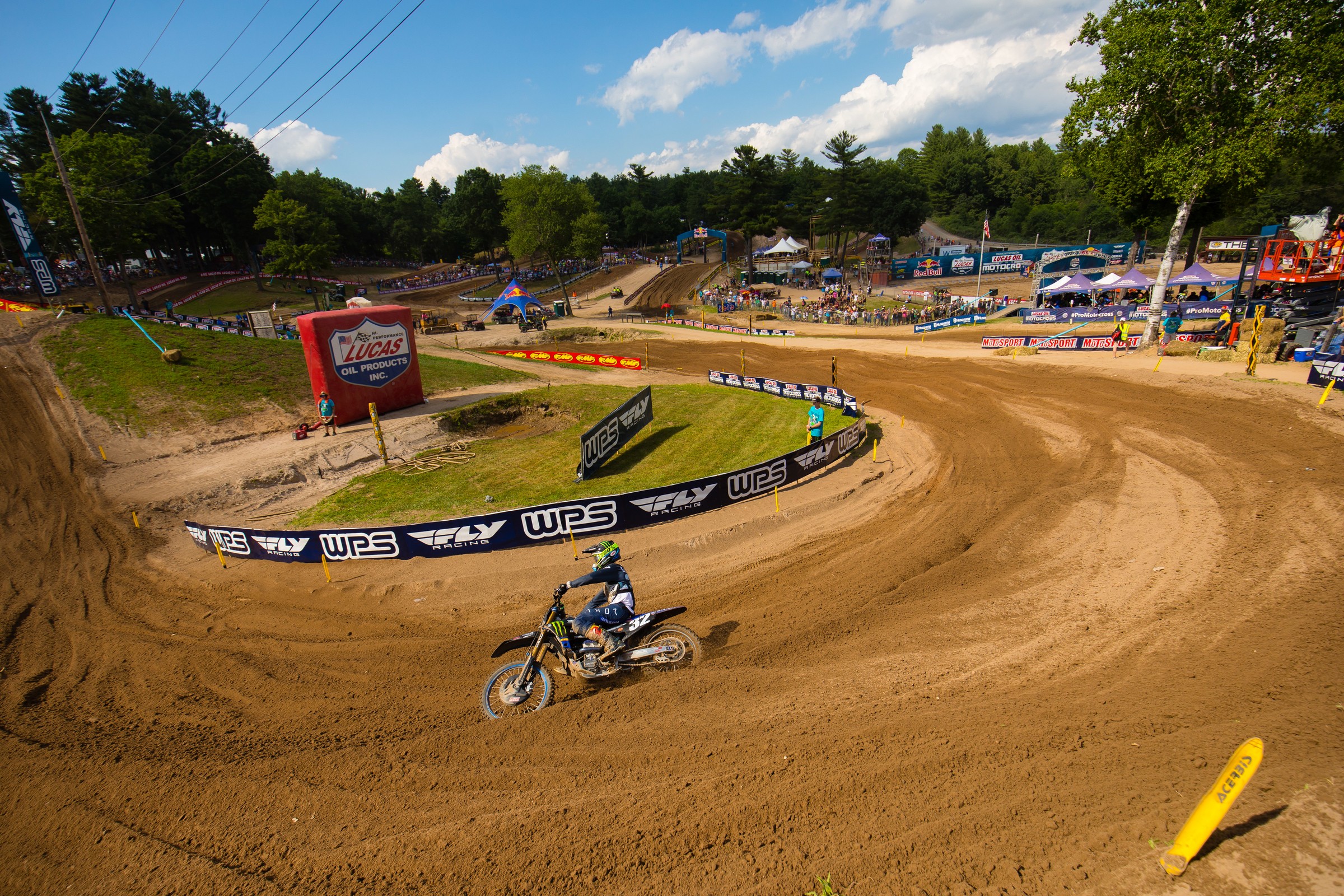 We’re once again firing off questions at long-time pro Jason Thomas for some opinions on the sixth round of the Lucas Oil AMA Pro Motocross Championship.

People were struggling badly with the slick base to the sand. Explain the weird feel this creates.

When most people think about riding in sand, they associate aggression and lots of throttle. Sand, by nature, is deep and rewards aggression. Southwick is a bit different, though. The base is harder than most would think. The inside lines of many corners are almost clay based. The outsides berm up and turn to sand but if riders tip-toe around the inside, there is no sand to be found. That unique base forces riders to pick and choose where to unleash their high RPM and where to shift up a gear and avoid wheel spin.

One of the most important aspects I can remember about Southwick was knowing which part of the corner to pick up the throttle. Most corners at Southwick get pushed wide, the soft dirt drifting more and more throughout the day. That leaves a hard entry and mid-corner where riders need to allow the bike to roll. It’s important to keep their momentum from the previous straight and not brake too hard, avoiding a start/stop scenario. When most less skilled riders would want to apply the brakes, Southwick specialists would avoid the gas and the brakes both, let the bike roll into the corner and use that momentum. As they reach the apex of the corner, they will find the softer dirt and can then pick the throttle back up. The entry and mid-corner should be one smooth motion and nearly idle until reaching the actual berm near the exit of the corner.

Most riders would make the mistake of braking upon entry, then needing to regain that momentum, try to apply throttle mid-corner where traction is minimal. That start/stop will upset the natural flow of the momentum and is far too unpredictable as that RPM is applied to the hard, blown off portion of the corner. It’s a very difficult technique to master because it feels “slow.” All of the coasting into and through the corner is hard to swallow but if the momentum is maintained, it’s much faster than it feels. More importantly, it’s predictable and efficient. Most sand tracks don’t create this hard mid-corner but Southwick is a weird duck.

Honda HRC's Ken Roczen was on of the riders who struggled in the sandy corners in qualifying, although he had this nice save.

Dylan Ferrandis said he guessed way wrong on setup for the first moto. Give us an example of a change you would make for sand instead of hardpack?

He was definitely talking about chassis/suspension adjustments. He would have make some basic changes before timed qualifying and then adjusted yet again before the first moto.

The toughest part of this is that the track changes quite a bit from his qualifying practice to the first moto. There are two more practices, plus two LCQ races, meaning there is around an hour more of riding that’s added bumps and changed lines. That means riders will have to guess a bit on setup.

If I had to guess what he would be adjusting, it would be some variation of ride height, high/low speed compression, rebound, and overall stiffness. There are an incalculable number of variations in the options I just listed but that’s where he would be looking for the right setting. Most riders nowadays love their bikes to be much stiffer than I ever did. Southwick’s sand forces that stiff setup as the sand “loads” the suspension but it also makes the action less plush and can respond violently in the hard chop bumps. That problem was always difficult for me to solve. The soft rolling bumps demand a stiffer setup but the sharp, ledge style bumps beg for something softer. It’s just another unique Southwick aspect.

You’re from Florida and all Florida riders are assumed to be sand specialist. But is Southwick like Florida?

It’s similar enough to help. Looking at the results, Florida based riders like Lorenzo Locurcio, James Weeks, and Tristan Lane all rode well. There is definitely a slightly different feel to Southwick sand but the core skills are certainly in play. Going back to my racing days, there were Floridian riders I would have to contend with at Southwick that I never really battled the rest of the year, too.

How much did Southwick change during your years there? Was the base always there?

The hard base was fairly consistent but it definitely changed in preparation throughout my career. In the Steve Whitelock era (mid 2000s), there was a decision made to leave the tracks rougher. For Southwick, they actually left the track rough from the “warm-up” race the weekend before. So the first lap of Saturday practice (it was a two-day event back then), it was still brutally rough from the last lap of the prior weekend. The track was much slower, rougher, and sandier as the outside berms were already formed. I don’t know if that was a good change or bad, but it was a much different looking race track than the current era. Go back and watch race footage from back then and see how many sand rollers are laden around the entire track compared to the choppier style of track nowadays.

Just about everyone on the podium said they were exhausted. Is this residual from last weekend or was Southwick just that brutal?

I would say a bit of both. There is no way that riders were completely recovered from the Florida national. Regardless of how they felt Saturday morning, most were still recovering somewhat due to dehydration, exhaustion, etc. Southwick is tough enough by itself but having the most difficult race of the year (so far) the weekend before added another level of difficulty.

On this same topic, I have to add that when I heard and saw riders like Chase Sexton out doing motos in the heat last week, I just shook my head. In my opinion, there was absolutely nothing to be gained by doing that. I could be wrong, it’s happened before, but I think riding last week was a big mistake for Sexton. So many riders think more is always better. Listening to your body is a skill learned over time. If you aren’t 100 percent on Saturday, you’re only doing a disservice to yourself. Sexton is in great shape due to his work ethic, but getting rest is just as critical. Mid-season rest is a very underrated aspect of the total picture, especially  between two brutal Saturdays. Hopefully he, and others, realize that to be their strongest, they need to allow their body to recover first.

Are you surprised by Adam Cianciarulo?

The first moto surprised me. He was incredibly aggressive with Justin Cooper on the opening lap, muscling him out of the way. He also dropped the hammer speed wise, opening up a gap and making life easy for himself. After Cooper’s speed in qualifying, I didn’t think he would be able to sprint away but that’s exactly what he did. He won at an event that was a big trouble spot for some riders last season. It also sent a clear message to Justin Cooper after last weekend’s breakthrough.

I was. This event is usually one where he overpowers everyone with strength and raw speed. Musquin tossed his bike into a fence trying to keep up with him in past years. Eli wasn’t terrible, obviously, but he never had that next level speed that we have grown to expect at The Wick. If you’re a Tomac fan, you can counter with him extending his points lead but I would be lying if I said I didn’t expect more. Maybe this is a new strategy, maybe he doesn’t have the same speed advantage, or maybe the other guys have closed the gap a bit. Regardless, he still has a nice cushion and probably isn’t too worried as his closest competitor, Ken Roczen, has run into difficulty.

Speaking of Roczen, what’s up with him and Sexton?

I don’t think these are the same issue. Roczen is dealing with some sort of health concern and I don’t have any more insight than that (maybe he doesn’t either). The hardest days make this concern more visible, losing big points in the last two rounds.

For Sexton, I think he is just overdoing it. I think he is training too hard and too much, putting his body into a tough spot. All I have ever heard about Sexton is how much work he puts in, so I definitely don’t think it’s a lack of trying. I think he’s his own worst enemy and needs to allow his body to catch up. He rode motos in the Florida heat this past week (as I mentioned above) after nearly collapsing after the first moto at WW Ranch Motocross Park last weekend. Hard work is incredibly important but it’s also just as important to know when to put in that work and when not to.

He’s finally coming around. We saw glimpses of this at Fox Raceway at Pala but he’s arrived. Both he and Zach Osborne need to make up a full moto worth of points on Tomac but they have to be encouraged by their progress.

Leaving High Point, I wondered if the Baker’s Factory guys could work together to close the gap to Roczen and Tomac. It seems that’s exactly what’s happening as Jason Anderson’s speed is undeniable, while Musquin and Osborne are doing damage in the overall results. We are only halfway through this series and while Tomac will have his good days, too, I think this is far from over.