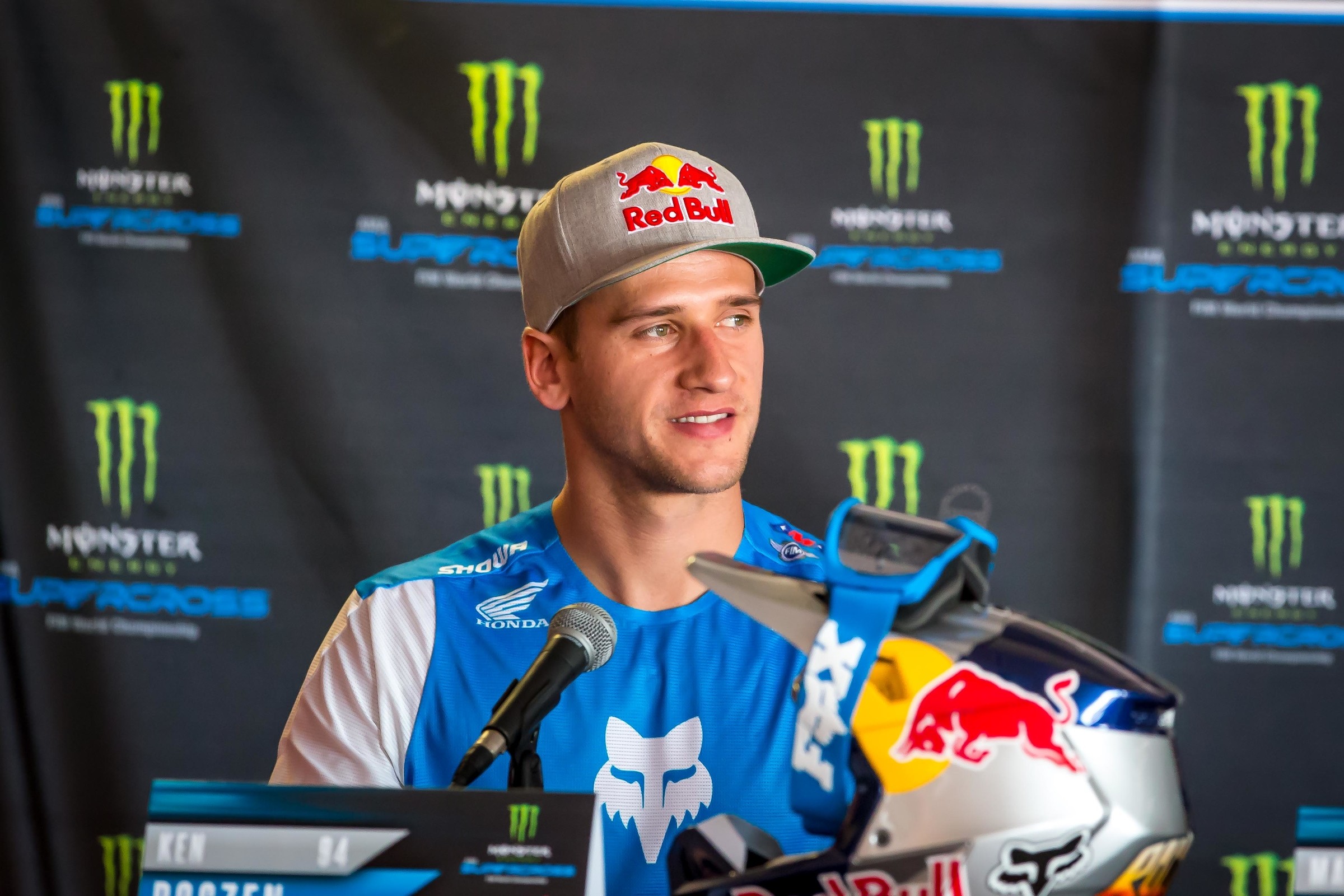 Honda HRC’s Ken Roczen didn’t win the Monster Energy AMA Supercross Championship this year, but at least he stayed in the championship all the way to the end, a much better experience than the 2017 and 2018 seasons that ended early with gruesome injuries.

Ken is still fighting some physical problems, though, and still trying to figure out what those are. But these are near-term issues—after two tough years, Kenny and Honda are glad to be at the races consistently with each other. Now they’ve announced a new three-year contract.

Kenny spoke to us about that at the Las Vegas Supercross press conference.

Racer X: This has been a big element to the whole season. You’re one of the biggest puzzle pieces that’s got to finally get put in place. When did you guys finally get to put this into paper?
Ken Roczen: Actually quite a few weeks ago. I think it might have been Daytona time, or just before Daytona. We were kind of waiting on announcing it and stuff. It just made more sense to do it here at this time. It was huge. I feel like we haven’t been showing what we can do yet. My heart is in the red pits [Team Honda pits]. We want to keep going. I think the next three years have big things in store for us.

Was there ever a time where you were nervous or they were nervous? It was a big three-year deal already. You haven’t gotten the results that I’m sure they or you wanted. Was there ever a time where you were nervous like, maybe they’re not happy with me? Or their bosses weren’t happy they signed me? Did it ever get a little bit tense?
No, not really. They have been nothing but supportive over this entire time. There has never really been any pressure. Obviously after what happened the last couple years we have to be more patient than sometimes we want to be. That’s what I meant earlier. We have to be smart. For me, I’m thinking long term. I haven’t achieved winning anything yet, really. I’ve had unfortunately some more struggles. It seems like the last three years I’ve really had some… I don’t know if you would want to call it bad luck or anything but things haven’t really fallen into place. But that will stop. I’ve got to keep thinking positive. From that side, they’re super patient. The awesome thing that I like about it, they will do whatever it takes to make the rider comfortable. So I’m really excited to have this and to keep this going. It’s really important for me, and especially also having the security with everything. It’s great. I love it.

You’ve done a really good job the last two years of branding yourself with these companies. Art Of Sport has been a huge deal. Red Bull’s been a legacy deal. Breitling’s the new one. Honda’s utilized you really well as far as in a marketing sense. For you, this just makes you the face of the brand in every way, shape, and form, the same way [Marc] Marquez is. Was that part of the deal? You probably can’t get that at another team? Across all things, too, with all power sports. The UTV stuff that you did…
Absolutely. That’s what’s cool about Honda. They have their hands in everything whether that’s UTV, four-wheel, two-wheel. It doesn’t really matter. I think that’s just me in general. The outside sponsors, I like to stand out instead of fitting in. So having these big companies like Breitling, Art Of Sport, this whole deal going on. I like to do that kind of stuff. So I think no matter where I would be, it would be the same. That’s just my personal things that I like. Same when it comes to the clothes that I wear or whatever it is. I’m just really into all this fashion type stuff. I don’t know if other riders are like that or not, but I’ve always been kind of a little bit out there and trying to do some cool stuff.

What’s funny though, when you first signed everyone was like, “Honda is so corporate, and Kenny just does what he wants. Is there going to be friction?” I think you’ve proven in the three years that it’s not an issue.
When they hired me they knew what they were getting into. You can’t catch a lion or whatever and keep it in your backyard expecting it to be a sweet, little kitty. They knew it’s me. It’s my character. I am doing all this stuff. I like doing it. So when you hire me, that’s what you’re going to get.

You say this deal’s been done since around Daytona. But there have been other rumors, “He’s looking for other places. This hasn’t worked out.” Has it been funny for you to hear those rumors, when people have no idea that we’ve already put pen to paper?
I hadn’t heard any of that. That’s new for me. I don’t even think I’m putting off the vibe that I’ve ever wanted to be anywhere else or whatever. I haven’t heard any of that. I’ve had other struggles than focusing on all that kind of stuff. I’ve just been having to figure out and just getting back to the top and getting back to a hundred percent. Right now that hasn’t really been the case.

Talk about that. We’ve got outdoors coming up, which is gnarly, and you’ve had your some sort of physical issues you’re dealing with. Are you coming in pumped on this, or is this a work in progress? Do you know where you’re at right now?
It’s in progress. I’m actually going to see a couple of specialists up in Stanford because things haven’t been right. You can see in my racing. Even some days, like Nashville I felt terrible at Nashville. My riding was really good, but obviously it doesn’t help me talking about it during race day, so I try to stay away from it. It sucks. Sometimes you feel bad or whatever it is, even when you’re sick, and then within a week you’re fine. But it’s been ongoing for so long. It’s tough to be in that position. What really kick started it off was in the beginning of the season I was good enough to be up there and fight and I had some fight in me, but what really kick started it off was San Diego, that whole lime incident. I had these burns and then they started getting infected so I had to be on an antibiotics cycle, and then shortly after that I got sick. Something must have happened with my immune system and everything and I got sick again, so they put me on another antibiotics cycle. That really collapsed my system, for whatever reason. There was a time where I was showing up on the weekend racing and I felt like I had the flu at all times, for weeks. It was not fun racing. Then some people think it’s an excuse. I don’t need a freaking excuse. I don’t want to talk about that crap all that time, but obviously you know how I’m racing. I started going really uphill. Minneapolis, Detroit. I was doing really good, getting confidence and consistency. Then during that time it all happened. I showed up at Detroit and I was just trashed. I was ill there and we had the Triple Crown race. I was so smoked after the first main event already. From there it just started crumbling, I think. It’s been a tough time with training during the week. I’ve hardly done anything. It’s been kind of funky.

So do you even know how these next couple months are going to go? Can you really put a finger on it?
We have an idea of something and everything seems to be that one thing, but I’m getting confirmation next week. It’s really tough with Stanford and some of these specialists to get in there on such short notice too, especially when I’m in Florida the whole time. It’s really difficult.

You did a three-year deal. You’re a young guy. You just turned 25 this week. Was there ever a, “Hey, I need to maybe start winding this down? This isn’t what I want to do?” Or, “No, I’m going to race into my 30s?”
I don’t know about racing into the 30s. It’s all kind of up in the air. All I’m looking for is some consistency because there are years like 2016 where I feel like it was my year. I might not have gotten the supercross title but I was starting to race really good. I was really happy. I was doing my work and there was nothing for me to ever worry about. I had to just do my thing. If every year was like that, you can race well, but then obviously the last couple were a lot different. It’s like these last two years cost me ten years of my life or something! [Laughs] So I’m hoping for a little bit more just consistency and easy living. The last three months I’ve been scrambling and going to Miami and seeing doctors and doing this and doing that. That crap wears on you.

Do you think those injuries and all the surgeries you had might have led you to be more susceptible to feeling rough this year?
Yeah, for sure. A lot of doctor’s confirmed that too, that all the surgeries and the trauma, and I was on antibiotics for four weeks at that time. My body has changed, that’s for sure. We can manage. I need to figure this out and then after that, I have a nutritionist and I’m doing everything. I’m taking more care of my body than I ever have before. That’s what’s so tough, because…

Even before you felt bad? It wasn’t like you were over-doing it? You were trying to prevent this from happening in the first place, right?
Yeah. Something funky was just going on, and I didn’t really know about it yet or whatever. But at least I was good enough to where I could do my job good and be at the gate and knowing that I’m going to hammer down. But then with all the antibiotics, it started crumbling. I was at the line sometimes like, “Dude, I should not be here right now,” just because I was weak. It didn’t feel right.

But during all this is when you kind of re-upped for three more years, so no one is worried long term?
Exactly. That’s what I meant by long term. Right now it’s important for us to stay out of injuries. Injury is the last thing that I need because I’m still trying to get all this stuff figured out. I’m trying to get back and get going. So, that’s why I haven’t won yet and I’m not in the championship. For a while it was looking really good, but for us it’s important to get some things figured out. My results will come. I’m not worried about that at all. I’m a hard worker. I like taking care of my body, especially the people that believe in me. It’s all about to happen, it’s just there have been some tough times.