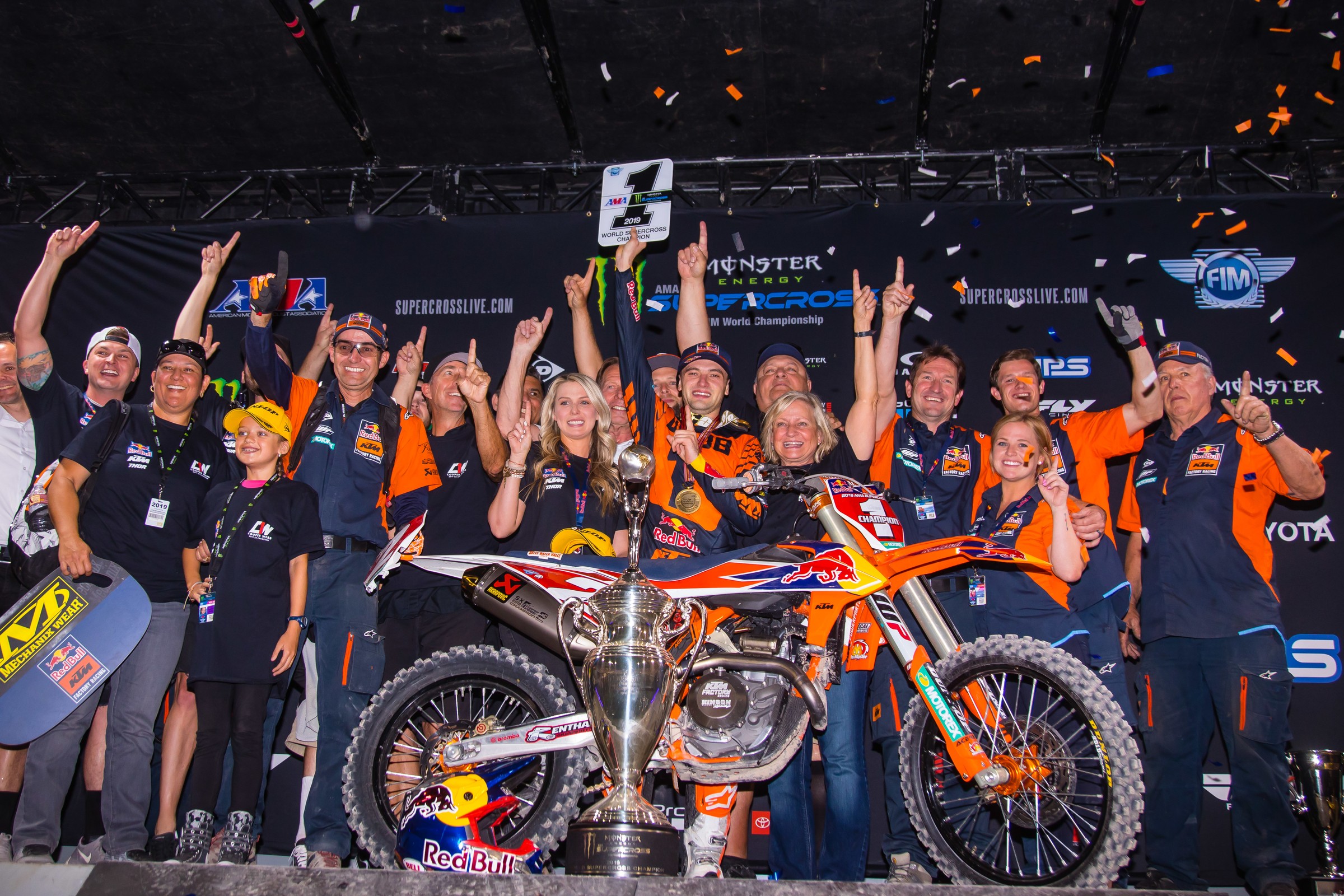 What an incredible season for Cooper Webb. How did he do this?

We all know how tough the first two 450 seasons were for Webb. I think there was a bit of negative momentum happening in 2017 and 2018, too. He seemed to be frustrated with the bike and his own riding, compounding the problem. Regardless of what he changed, the fact that he needed change was very apparent.

The move to Red Bull KTM and Aldon Baker’s program was a complete reset. New bike, new house, new tracks, new mechanics, all of it was new, new, new. He jells with the smaller KTM (Webb isn’t a big guy) and visually, he is a lot leaner than he was a year ago. Sometimes change can be the right move simply for the sake of change, freshening up the surroundings and enthusiasm. In this case, though, I think these specific changes were exactly what he needed. I think it opened his eyes to the level of commitment that his 450 competitors were devoted to. He was able to learn and absorb with two out of the top three in the previous 450SX championship (Jason Anderson and Marvin Musquin), not to mention two-time 250SX champ Zach Osborne. He got the added benefit of Musquin’s 2018 bike development, too. At every turn, it was beneficial and positive.

As for the racing season, he was relentless. He wasn’t always the fastest guy, but he rose to the occasion every single time. He didn’t have bad days. Even on the days where he looked to be struggling, he would grab the holeshot and hang on to the leaders with a death grip. In a series where Eli Tomac, Musquin, and Ken Roczen left points on the table multiple times, Webb simply didn’t. His series reminded me of Ice Man in Top Gun. “That’s him, Ice Man. That’s the way he flies, ice cold, no mistakes. He wears you down, you get bored, frustrated, do something stupid, and he’s got ya.”

Ugh, Adam Cianciarulo. How could this happen?

He just made a mistake. It’s not complicated, it wasn’t bad luck, it was just a crash at the most inopportune time. The landing of the double had a big hole in it and he caught it wrong. It shot him to the left and he clipped the Tuff Blox. It happens to guys all the time. Joey Savatgy did the exact same thing in a different section earlier in the day. The brutal fact is that it happened with four minutes left and the title secured.

In hindsight, the only real recourse he had was to completely back out of it and brake hard when he felt himself going left. He may have come up short on the next jump but it would have curbed his veer to the left. It’s so hard to judge a split-second decision when all of that is happening so fast. He knew that two of the GEICO boys were right behind him and he couldn’t afford to go backwards with Dylan Ferrandis out front. I think that added pressure pushed him to stay in it and ultimately the mistake. It was a tough thing to watch and I can’t even begin to imagine what AC has dealt with in the last 48 hours.

Conversely, Dylan Ferrandis did everything he could do to win. How much did David Vuillemin help?

That’s true, Ferrandis did his part. All he could do was go win the race and see what happened. He was in the same situation as so many others in past years, down several points and needing a big mistake from his rival. Usually, that mistake doesn’t come. This year, it did. It still says a lot for Ferrandis that when he needed to win against the full 250 field, he went out and did it.

As for DV, I think he was a big help on and off the track. DV has been in America for 20 years. He knows the ins and outs and pitfalls for a foreign rider to avoid. He has so much insight not only for racing, but for life in a new country, too. I don’t know if his influence can be overstated. He would be a good resource for any rider, but for a French rider, it’s immeasurable.

Justin Cooper and Chase Sexton battled down to the wire for the 250 East title. Thoughts?

It was much less dramatic than the West. Justin Cooper hadn’t been his best self the last few rounds and wasn’t putting Sexton under pressure either way. Sexton cruised most of the main event, never really taking big chances. I doubt he even saw Cooper in the main event. Compared to the drama unfolding for the West title, the East was mellow yellow.

Any other thoughts on this 2019 SX series?

It’s interesting to hear the narrative changing for Marvin Musquin. For the past few seasons, it was “when” for Marvin. Now, the whispers are shifting to “if” he will ever get this title. He is a spectacularly good rider. His technical skill makes me shake my head at times. To win this title, however, he is going to need to put it all together. He can’t suffer an off-season injury like he did this year, he can’t give up big points to penalties like he did at Seattle, he can’t throw away races like he did in Houston last year. He can win, yes, but it has to all go to plan. He doesn’t have to be perfect, but he will need to be close.

Who should we be on the watch for this outdoor season?

I like the trajectory of Zach Osborne. He has steadily improved in the last month or two, gaining confidence, fitness, and speed. He nearly won East Rutherford, and then won his heat race in Vegas. He is finding his groove and each time he can get up there, it will get easier both mentally and physically. He’s riding daily with three of the best riders in the series (Musquin, Webb, and Anderson). Racing against them on Saturdays will feel just like a Tuesday in Florida.

I am also interested to see how Ken Roczen handles this summer. He had made mention of some physical ailment that they can’t pinpoint yet. Suffering physically is not an ideal situation as temps rise and the tracks get rough. We are all guessing as to how that plays out but it’s certainly something to keep an eye on. With a new three-year contract, if things are going south, it wouldn’t shock me to see him bail early in hopes of getting healthy.