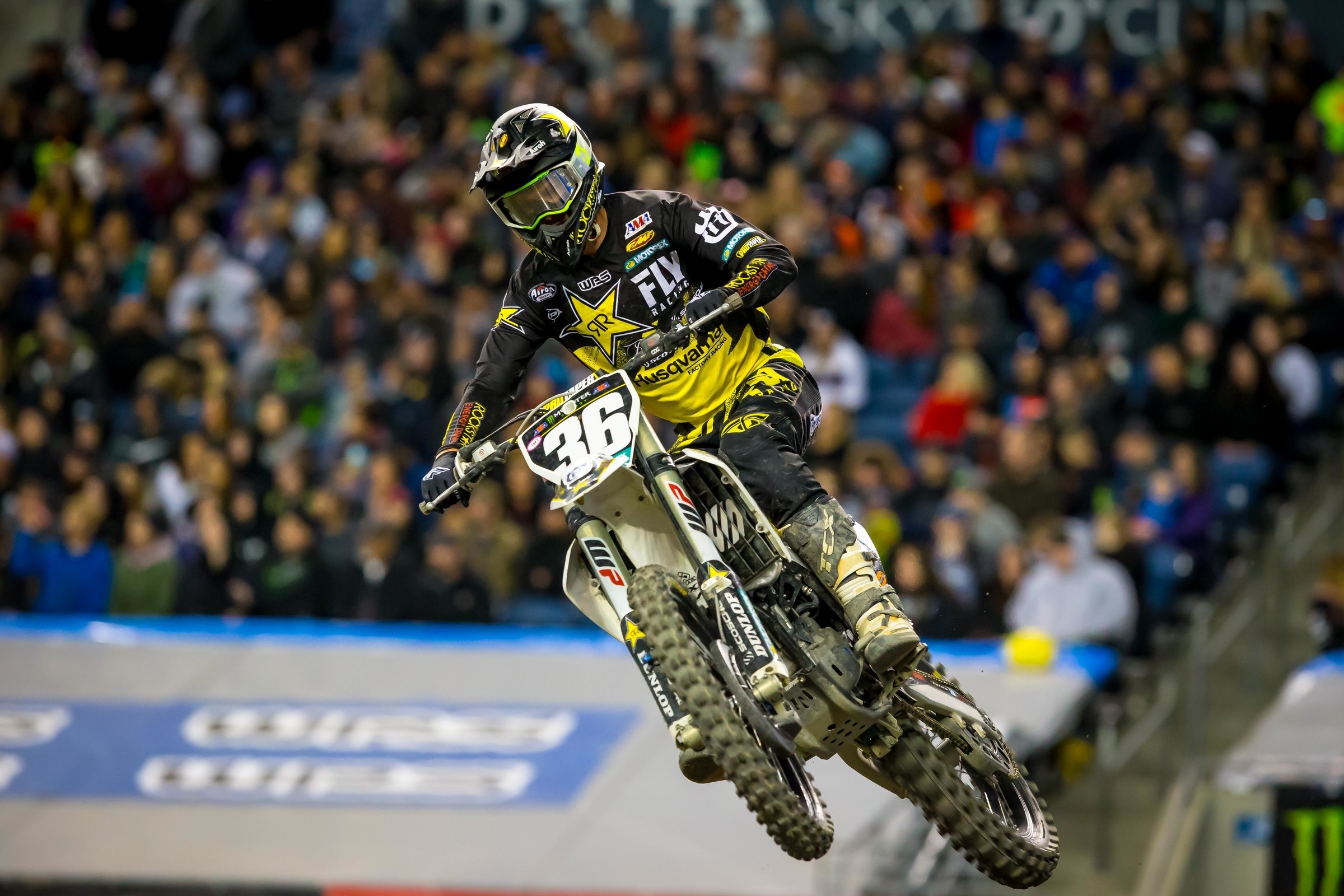 With Cooper Webb holding a 23-point lead over Eli Tomac, the only other rider who is still mathematically in title contention, things are looking good for Red Bull KTM to bring home yet another 450SX Championship. But things could still go horribly wrong for Webb. On Tomac’s side, he has to win—earning 23 points (the amount awarded for second) won’t get it done no matter what. If Tomac wins, Webb has to make sure he scores at least three points. In other words, all Webb has to do is finish 20th place or better and the title is his. Barring injury or mechanical failure, it’s all but in the bag for Webb. –Aaron Hansel

Out West there are just two riders who are still in it to win it, as far as the championship is concerned. Adam Cianciarulo, who’s won the finale in Vegas for the last two years, has eight points on Dylan Ferrandis, which means that if Ferrandis wins, Cianciarulo must finish fifth or better to take home his first professional championship. If Ferrandis takes second, Cianciarulo can take it home with eighth or better. And finally, if Ferrandis is third, tenth or better earns Cianciarulo and Monster Energy/Pro Circuit/Kawasaki a shiny new number-one plate to hang on the rig’s door. –Hansel

Technically there are three riders still in contention for the 250SX East championship—Chase Sexton, Justin Cooper, and Austin Forkner. But Forkner underwent surgery earlier this week and aims a return for the 2020 supercross season. So, with Sexton leading Cooper by nine points, a sixth or better from Sexton earns him the title no matter what. If Cooper takes second, all Sexton has to do is ninth or better. Considering fifth is Sexton’s worst finish all year, ninth shouldn’t be a problem, even with the additional talent present in the East/West Showdown. But just in case you’re wondering, if Cooper takes third, an 11th will get it done for Sexton. –Hansel

If all the title drama wasn’t enough in the respective regions of 250SX, we get to see it all play out in a single combined race when the gate drops for the final 250SX main event of 2019. That’s right, the finale is the Dave Coombs Sr. East/West Showdown race, which means we’ll get to see the best riders from each region battling for bragging rights. And for guys like Cianciarulo, Ferrandis, Sexton, and Cooper, who are all involved in title fights, the additional talent has the potential to completely turn things upside down. We’ve seen this race get crazy in the past. Will it happen again this weekend? –Hansel

The Battle for Fifth

Look, we know the fight for fifth in the 250SX West Championship probably isn’t the battle you’re excited about coming into Vegas, but it’s one you should be keeping an eye on, as it has the potential to make the racing extremely interesting. Right now three guys, Jimmy Decotis, Michael Mosiman, and Cameron McAdoo, are all tied for fifth. None of these guys want to come out on the seventh-place end of the stick, and you know they’ll be battling hard to be the one who ends the season in the top five. Pay attention if these guys find each other on the track—things could get wild! -Hansel

With his fourth-place finish in East Rutherford, Monster Energy/Pro Circuit Kawasaki’s Martin Davalos is now one point away from pointing out of the 250SX class. Because 22nd place in a main event earns one point, the 2019 Las Vegas Supercross could be Marty’s last ride in the 250SX division. Will Davalos move to the 450SX class for 2020—which is his goal—or will he call it a career after this weekend? No one really knows what’s going to happen, except for the fact that he will indeed line up behind the gate tomorrow. –Mitch Kendra

We’ve mentioned Roczen in this category in 2019 “more times than I can shake a stick at” as my dad would say, but hey, this will be the last time it’s supercross related (insert shoulder shrug emoji). We saw the #94 kicking ass early in the season—nine top-five finishes in the first ten rounds—but then he struggled a little with some health issues. He returned to form in Seattle and looked like he had done so in Nashville too, but has since been dealing with the lingering issues. While out of the championship battle, Roczen could push himself to a solid ride this weekend that would only help his confidence heading into the Lucas Oil AMA Pro Motocross Championship on May 18. This will only be his third time lining up for the Las Vegas season-finale in the premier class—could it be his best result? –Kendra

For some, their title chances rely on this weekend. Others simply want to get in one more healthy supercross ride before the Lucas Oil AMA Pro Motocross Championship starts. But for others, this race could be huge. Riders such as Brandon Hartranft and Josh Osby are making their respective cases for earning looks from factory teams for next year. Hartranft has five finishes inside the top ten this season, including the last two East rounds in Nashville and East Rutherford.

Osby was forced into the LCQ in Atlanta (which he won although he DNF’d in the main), but had two back-to-back top ten finishes in Daytona and Indianapolis. While he hasn’t had the results he’s wanted, he has the ability to go fast and has put it on display several times throughout the season. Jacob Hayes is out for this weekend but is another rider that has made a solid statement of his own. He’s finished in the top ten three times and has ran near the front on several occasions. –Kendra

Both the 250SX East and West regions will return to the gate for bragging rights again this weekend, but the field could look very different from the first East/West Showdown of round nine. Riders like Garrett Marchbanks, Kyle Peters, and Josh Osby—who took the 20-22 spots in the first Showdown—will look to better their results this time. As injuries have taken a toll on both coasts, looking at the results from Atlanta there are four of the 22 riders from the main event are out this weekend with injuries, including Austin Forkner, Shane McElrath, Jordon Smith, and Jacob Hayes. This leaves the door open for four different riders to line up behind the gate tomorrow for the Dave Coombs Sr. East/West Showdown—who will it be? –Kendra

JT pointed out the typical gnarlyness of the Vegas whoops earlier this week, and this year’s layout has its own back-to-back whoop section. If the whoops continue the tradition, look for blitzers such as Ken Roczen, Blake Baggett, Eli Tomac, etc. to be near the top of the qualifying board early tomorrow. The track in general looks like it will provide the fans with what they want to see as several turns have the phrase “block pass” written all over them and there’s some big rhythm sections that will help us declare our three class champions.

The section that eventually leaves the stadium appears as a long, tough section that requires riders to be precise when going through. It’s tough to say what the quickest line will be, but no doubt guys like Justin Bogle, Joey Savatgy, Tomac, and Baggett will make sure to test out all options. The track appears to be hard packed, which will benefit some riders who didn’t like the slickness of East Rutherford. Who will benefit most from the layout and build this year? –Kendra