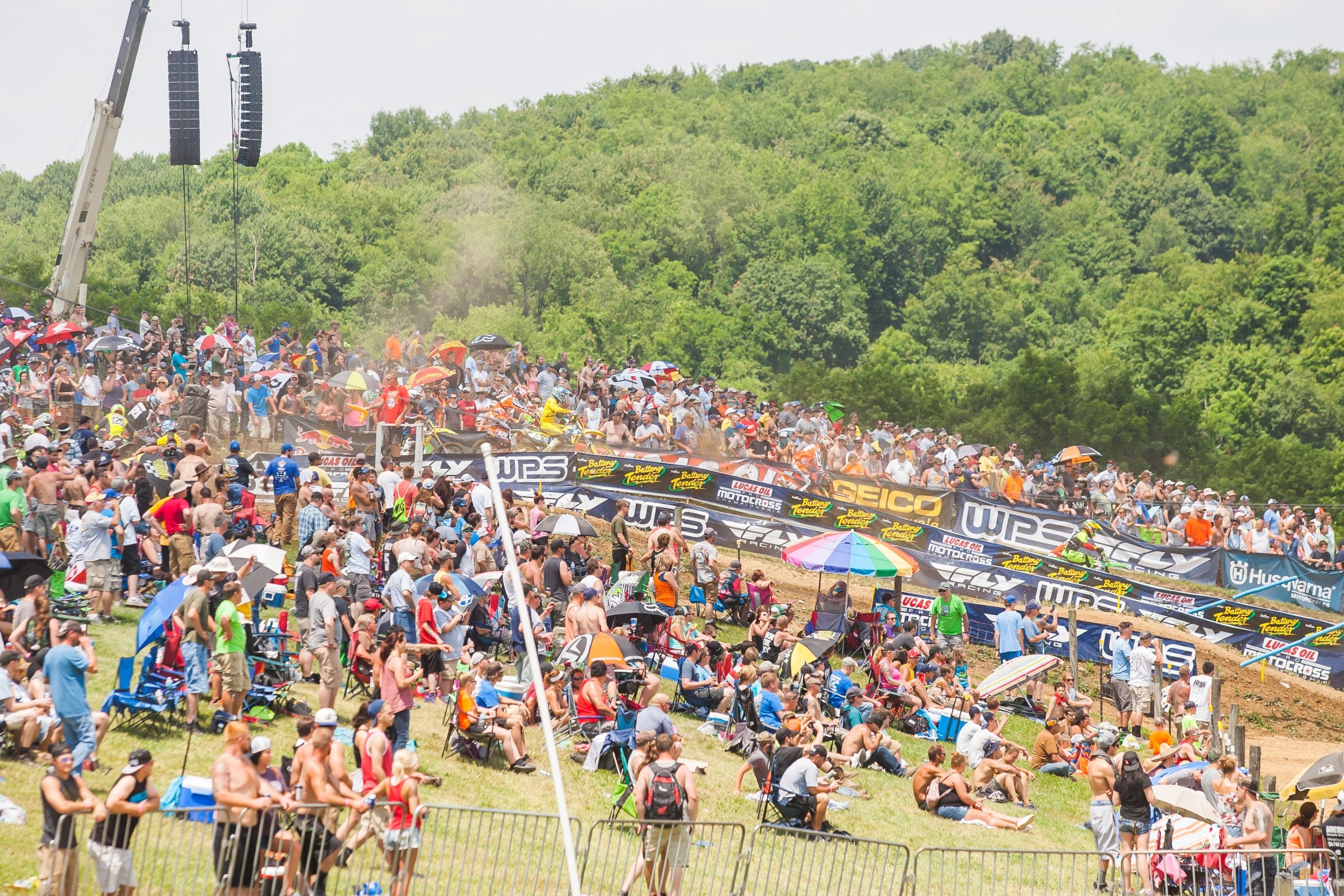 Quiz the riders about the National tracks and the answers are usually the same. Everyone loves to ride the RedBud and Millville tracks. Glen Helen is the local track for the industry. Hangtown is the traditional opener. Unadilla is one of the gnarliest, with deep tradition. Southwick is the sand track. Nearly all of the tracks have something distinct, a unique reputation for something, and yes, not always good. (Try, try as they might, no one said the Lake Elsinore National was a home run.)

Oddly, it seems to me like one National has fallen into the cracks—not anyone’s favorite, nor anyone’s least favorite. Not the best not the worst not the toughest not the roughest but not the easiest, either. Ironic for a place called High Point, this track ranks somewhere in the middle these days.

It didn’t use to be that way. In fact, during the 1990s heydays, I’d argue that High Point was what RedBud has become—the must-see, must-go, must-celebrate holiday weekend extravaganza. But then High Point had to move from its traditional Memorial Day Weekend slot. The travel pattern to get teams through the Las Vegas Supercross, get them a weekend off to prep for outdoors, then race the two California rounds, pushed High Point’s date into June. You want something to complain about? In 1997, Hangtown took place on May 4, followed by Glen Helen on May 11, then the Las Vegas Supercross came the weekend after those Nationals on May 17, and the next weekend the teams had to be in Pennsylvania for High Point, the riders trading 100-degree weather and desert hard-pack supercross for ruts, off-cambers, and rain at a National. Yes, that made no sense.

So High Point moved, and so did many other things. Look, when I was a kid I went to High Point to watch the racing. Period. I didn’t need any other attraction besides watching factory riders on a cool track. I didn’t even know that High Point had an underbelly, and it came out on Saturday night when the fans got the party started. Actually, it probably started on Friday night. Maybe Thursday. Apparently, those fans were rabid. That crowd was huge. By Sunday morning the hillsides were packed with campers and the fans were all lubed up and ready for action.

The atmosphere was something special, and I remember once, probably around 1995, when Motocross Action printed a guide to the Nationals, they said what really made High Point special was the fans—which they proclaimed to be the best in the sport.

How crazy did it get? One year some local told me High Point nearly outdrew the Indy 500 (which took place on the same day) in attendance. Indy fits 300,000 people. So that shows you A.) How big High Point felt and B.) How ridiculous some of the fans were. Turns out for the most part those wild fans were local high school kids celebrating graduation, as High Point on Memorial Day Weekend had become a right of passage (and partying) for kids all over the area. It was so wild and crazy that at one point several cars were upturned and burned.

A lot of that ended in 2002, when the party got a little too crazy and cops had to come in and the incident got interpreted on the local news as “riot at a motorcycle event” which immediately conjured up visions of Hells Angels gone wild. Not a good look. From there, the partying had to be toned down. Hardcore fans like myself never cared about the partying anyway, but any big sporting event needs that element to draw additional interest. You think all 300,000 people at Indy know the names of all the drivers? Keeping the fans intact while not letting the parties get too crazy is something all tracks have juggled—I hear incredible stories of the Unadilla “Hill People” from the 1970s and ‘80s—so kudos to RedBud, which has figured out a way to keep the animals corralled (in their infamous Lot B), yet also happy while not letting them spill over and mess with the entire event.

As for High Point, along the way the AMA changed some of the iconic sections of the track. The famous billboard turn—a berm literally made out from a piece of plywood, with sponsor logos attached—went away. From what I heard, the AMA didn’t like the track crossing perpendicular back across the start, so they jumped that triple behind the start gate, hung a brief right, and then went back left. Before, they jumped, turned right, and raced back across the start straight. That’s where the mechanics would stand and hold the pit boards. By removing the billboards, they removed the mechanics’ area, so it moved over to Bradshaw Boulevard, the section of jumps leading to the finish line. The AMA didn’t want riders jumping and reading at the same time, so Bradshaw Boulevard became much like an actual boulevard, as in no jumps. Thus, two iconic sections were gone.

Also, High Point amateur day was once a massive spectacle, but, in my opinion, when the sport went through a huge explosion of growth in the mid-2000s, everyone wanted to get a piece of the amateur pie, so events dubbed as “big amateur race” sprung up everywhere. Where the top prospects once looked for places to race, they now had too many options altogether, and I think everything simply got diluted.

Then in 2008 the race moved off of the Memorial Day Weekend date. I’ll tip the visor to my bosses from our sister company at MX Sports. Moving High Point’s date wasn’t the best move for High Point itself, but it made the calendar much better for the series, teams, and riders.

During my 17 years with this company I’ve even seen High Point change in the grand scheme of all the work we do. There was a time when High Point was the biggest, baddest, craziest, and most important thing that came out of this Morgantown office. It was our Indy 500. Times have changed, though. Now MX Sports operates the entire Lucas Oil Pro Motocross Championship, making High Point just one of 12 very important Nationals. Loretta Lynn’s and the GNCC Series have grown immensely. And Racer X, just getting started when High Point was at its peak, is now a much bigger part of this moto puzzle.

This year appears to see a concerted effort to bring High Point back to the prime days. Memorial Day is no longer an option, but the race has a permanent home on Father’s Day weekend, bringing some of the holiday vibe back. NBC’s live network coverage is locked in for the Red Bull High Point National. The track has gone through numerous changes through the years to give spectators a better view, but this year’s redesign is probably the most prominent yet. But just as important as anything is the Ryan Villopoto Happy Hour on Friday night. With two-strokes on the track, a pit bike race, and the encouragement of campfires, bench racing, and beer drinking (with RV himself, a world-class smack talker—you’ll see) the party element at High Point could relight.

Anyone reading this website is here for the racing, and the wild parity we have in both classes right now is great. But there’s much more to a successful weekend at the races than that, and High Point is hoping to capture its old glory, and build some new fans along the way.