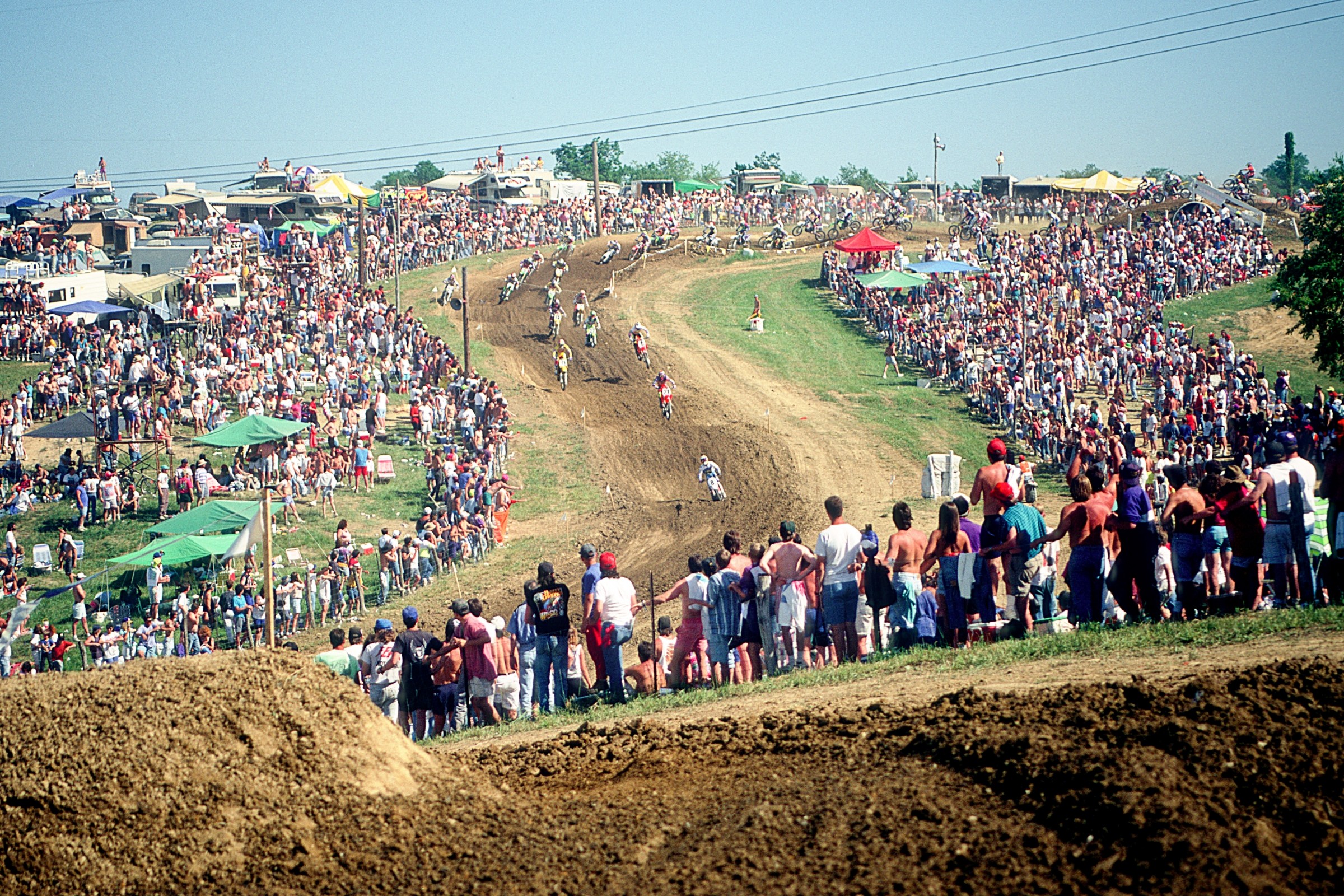 Nineteen-seventy-seven sounds like a long time ago now, as the High Point National zooms toward age 40 and readies for a mid-life crisis. What kind of crazy stuff could the track have in the works for this weekend? There have been plenty of fantastic races on the hillsides and off-cambers in Pennsylvania. For this week’s The List, we run down some of the best.

The first High Point National happened in 1977. It was the final round of the AMA 250cc National Motocross Championship (Nationals were mostly single classes back then) and it featured a battle between Suzuki's Tony DiStefano, the defending two-time champion, and Team Honda's Marty Smith, who had moved up from the 125 Class after the previous summer's stinging defeat to Bob "Hurricane" Hannah. DiStefano had the points lead, but Smith had a good shot at it if he could win the final and have someone finish between him and DiStefano. The man he needed to do it was Kawasaki's "Jammin'" Jimmy Weinert, and for much of the race it was happening the way Smith needed it to—he was winning, Weinert was second, DiStefano third. But toward the end of the moto, coming out of the bottom off-cambered section, Smith nearly looped out, which allowed both Weinert and DiStefano to pass him. DiStefano eventually won, Smith was second, and the title stayed with the Suzuki rider. A popular championship for the native Pennsylvanian!

In 1982 Ricky Johnson was just a teenaged prospect for Team Yamaha, riding a stock YZ250 against some considerable competition: Donnie Hansen, Broc Glover, David Bailey—all of them future AMA Motorcycle Hall of Famers. Johnson had won the Hangtown opener, much to the shock of his slightly older competitors, and he came into High Point with a head of steam. It was his first visit to High Point and RJ seemed to truly mesh with the track. He won what was called the Keystone National, not because Pennsylvania is the Keystone State, but because George Quay's Keystone Works Suspensions was the title sponsor! George's company eventually became Pro-Action, and RJ became the best American motocross/supercross racer of his generation.

In 1983 the AMA drastically revamped the Nationals, bringing all three classes—125, 250, 500 —together at each round. They also combined MX and SX points for one big Wrangler Grand National Championship, which would eventually be won by Honda's David Bailey. It was the 125 Class that was probably the strongest that year, featuring three-time champion Mark "Bomber" Barnett, Jeff Ward, Johnny O'Mara, Ron Lechien, and more. Barnett was the heavy favorite on his works Suzuki, but the bike proved to be unreliable at times. The Bomber also had a penchant for crashing big, which he did to start the second moto of the 125 National at High Point. From dead last, Barnett put on a charge for the ages, blitzing through the field at remarkable speed— so remarkable that his bike would later be protested and torn down. It was legal. It also only took to the 20-minute mark in the moto for Barnett to catch the last man in his way, Yamaha-mounted rookie Ron Lechien. It was arguably the best come-from-behind ride we've ever seen at High Point Raceway.

Barnett's effort would be repeated in 1990, albeit in a slightly different fashion. Jean-Michel Bayle was the heavy favorite to win the 125 Class, especially after it started raining heavily. He went out on his Honda CR125 with a towel tucked into the waist of his JT Racing pants in case he fell and needed a clean place to wipe off his gloves. He needed it on the first lap when he fell in the downhill rollers. The whole field slipped by while JMB was hung up, but his prowess with mud-riding—unknown to his competition at the time—proved to be lethal. Like Barnett in '83, Bayle cut all the way through the pack with relative ease, and by the time it was over he had his #22 Honda way out front.

In the 1984 edition there were two memorable moments. First, in the 125 Class, defending champion Johnny O'Mara led every lap of the first moto in his heated rivalry with Kawasaki's Jeff Ward, and then every lap of the second moto too. But going into the last turn, back when it crossed the old starting line, O'Mara hit a bump wrong and his right hand came off the bars of his works Honda in the last corner. Ward, following closely, knifed inside of the fumbling O'Mara and snatched the lead and the overall win, despite leading for only about five feet that day!

In the 500 Class, the David Bailey vs. Broc Glover battles continued, with Glover and Bailey splitting moto wins, but Honda's Bailey taking the overall. Along the way he turned a step-up jump behind the starting gate into a triple, jumping to the small mound on the inside of corner that followed. In an instant, Bailey became the first to conquer the triples behind the starting gate.

In 1991, the High Point fans were treated to an all-time epic battle between Damon Bradshaw and Jeff Stanton who basically passed and repassed each other all day long. Bradshaw had a rep for rough riding, but he and Stanton developed a trust and respect for each other that led to some aggressive racing, but nothing out of line. You want to see how it’s done? Check this one out. Bradshaw won the first moto, Stanton won the second for the overall.

Although he didn’t get that 1991 win, Bradshaw had begun to build a special bond with the High Point fans, as he won the 250cc overall in 1990, 1992, and even 1993, when he was fighting burnout and just months away from announcing his retirement. So when Bradshaw decided to come out of retirement in 1995, his comeback of course began at High Point. (Can you imagine Ryan Dungey announcing next spring that he wants back in the game, and that his comeback would begin at Millville? This was quite special!) That 1995 event was a mudder—as is often the case at High Point—but Bradshaw did give the fans a jolt when he led the first lap before getting swallowed in the mud. The overall winner that day? Doug Henry, the 1993 and 1994 125 National Champion who recorded his first career 250 overall win.

What did we say about mudders? The 1997 race was the high point of muddy High Point Nationals. The first motos were sloppy and then the rain kept coming, creating giant lakes covering parts of the track. Two years after his comeback began, it was clear that Bradshaw wouldn’t reach his old heights again, but he still loved High Point and still knew how to ride the mud. Late in the second moto, he jet-skied past Larry Ward to take the lead and the overall win—the first since his comeback began, and the last of his career. The fans, albeit drenched, went crazy. Interesting footnote from that one: pro rookie Ricky Carmichael won the first three 125 Nationals of the season, but crashed all over the place in the High Point mud. He finished a lowly 13th overall. Team Honda’s Scott Sheak took the win, the only victory of his pro career.

In 2003, another comeback was in effect as Kevin Windham used the Nationals to get his career going again, which stalled after he broke his femur at the 2002 Atlanta Supercross. K-Dub returned to action on the then-new Honda CRF450R, and he was faster than ever, challenging the CR250R mounted Carmichael weekly. Their daylong battle at High Point was as good as Bradshaw/Stanton in ’91, with plenty of passes and action. Back then, riders were just starting to double off the big spectator tunnel in the third turn. Windham and RC went next level that day, jumping it nearly every lap, and often side-by-side. Great show for the fans over there.

Carmichael faced a new challenger at the 2005 and 2006 High Point races, in James Stewart. High Point, the second round of the ’05 season, saw their first-ever real battle outdoors, and James (on a KX250 two-stroke) led for a while until Carmichael (on a RM-Z450) literally jumped over him to take the lead. A year later, Stewart had his KX450F four stroke and they battled hard again (another classic in the mold of Bradshaw/Stanton or Carmichael/Windham.) It ended when Stewart suffered a scary crash over the bars on the downhill double next to the start.

The legend of El Chupacabra began at High Point in 2011, when Blake Baggett launched two incredible come-from-behind rides to go 1-1 in the 250 Class. In the first moto he actually had to catch home track hero Darryn Durham, who led most of it on his privateer Eleven10 Mods Honda (even better, the Eleven10 Mods team was headquartered about 10 minutes from the track). The fans went crazy for Durham, but Baggett got him late. In the second moto, Baggett got a bad start and then crashed, knocking his visor somehow perfectly 180 degrees backwards in the wrong direction. It didn’t slow him at all, as he launched another great comeback to win the moto.

James Stewart’s amateur legend grew partially from High Point, where he routinely raced as a minicycle rider (one year they even held an exhibition 85cc race between the motos at the National, and he won it). His 2014 1-1 scores in the 450MX class marks, for now, an interesting full-circle moment for his career. Against a loaded field including Ken Roczen, Ryan Dungey, and Trey Canard, Stewart held them all at bay for a big win. Days later, it was announced James had failed a drug test dating back to the Seattle Supercross two months earlier, and a suspension was coming. He struggled at the next few races before calling it a season, and then a 16-month ban began. No one knows for certain when James Stewart will return to professional racing, but at the moment his 2014 High Point sweep stands as the last win of his career.