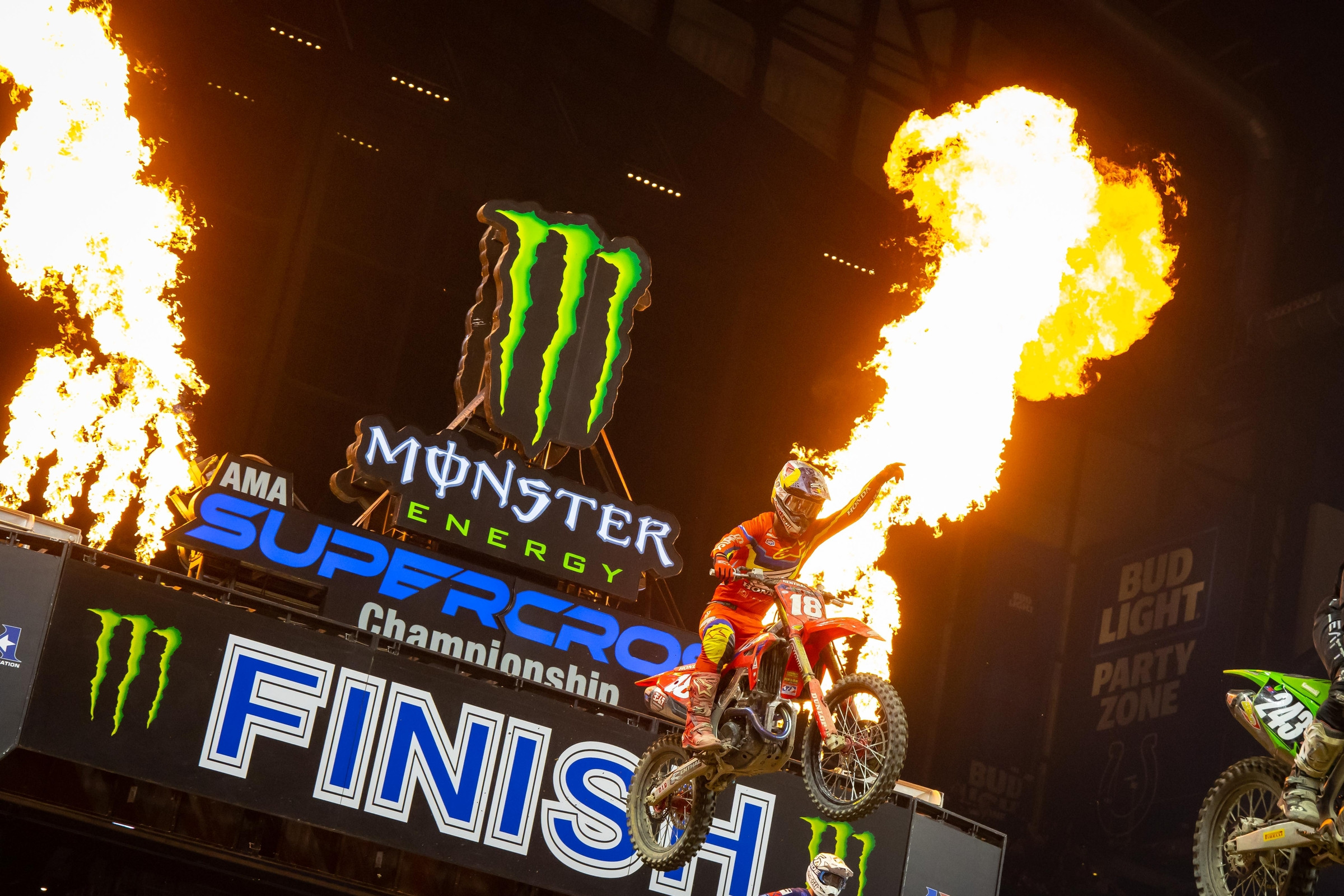 Jett Lawrence is checking all the right boxes. He has now won the 250SX Eastern Region Championship to go with his 250 National Motocross Championship from last year. A few weeks ago, we teased what clinching this title would mean for the young Australian via the numbers, but to him, there’s more to it than that. Lawrence took some hard knocks learning supercross in 2020 and 2021. While winning the Lucas Oil AMA Pro Motocross Championship is a tough grind with 24 motos and double the competition, Jett was so happy to have cleared the supercross hurdle that he ranks this year’s stadium crown as more significant.

“When you ate crap two times [two years] bad in supercross, it feels nicer,” he told our Steve Matthes. “Outdoors, I was consistent the whole time. I proved that, it was my goal in 2020 to be consistent, and my goal in 2021 was to win the championship. I just got it, Justin [Cooper] was really close and he rode fantastic, he was consistent, and he definitely made it hard for me. I definitely showed my grit, my Australian background, I guess you could say. Where this one [supercross], I was coming in, almost with a chip on the shoulder. Last year, looking great, then a silly crash, being a 17-year-old. Then going back to the year before that, 2020, that’s probably what made me pretty famous, the endo at Anaheim 3 [crashing while battling Dylan Ferrandis for the lead]. I’d say that step has made me who I am today. Those crashes, they definitely made me the person that I am and the racer that I am today, and it’s going to make me an even better 450 rider.”

Not sure when we will see Jett on the 450, but now we can square up his 250 career thus far. Jett is just the fifth rider 18 or younger to win both a 125/250F SX and MX title. Interestingly, when you look at the young phenoms who get it done, most start with the motocross title, and then supercross comes next. Note the similarities below, and by the way, James Stewart was the youngest to do so when he clinched the 2003 125cc West supercross title at 17 years, 3 months, and 22 days old. He won the AMA 125 National Motocross Championship the year prior.

Travis Pastrana was 17 years, 5 months, and 30 days old when he won the 2001 125cc East supercross title. Travis has also claimed the 2000 AMA 125 National Motocross Championship the year prior.

Ricky Carmichael was 18 years, 4 months, and 7 days old when he won the 1998 AMA 125 East Region Supercross Championship. He won every single race, by the way! Ricky had also claimed the 1997 AMA 125 National Motocross Championship the year prior.

That’s the full list right there—just five riders have ever grabbed a title indoors and out by age 18 (for you old schoolers, remember 125 supercross only started in 1985, so stars from the early days of the sport never had a shot at this record). If you’re Jett Lawrence and you’re in parallel with iconic names like Carmichael, Stewart, Pastrana, and Villopoto, you’re know you’re on the right track.