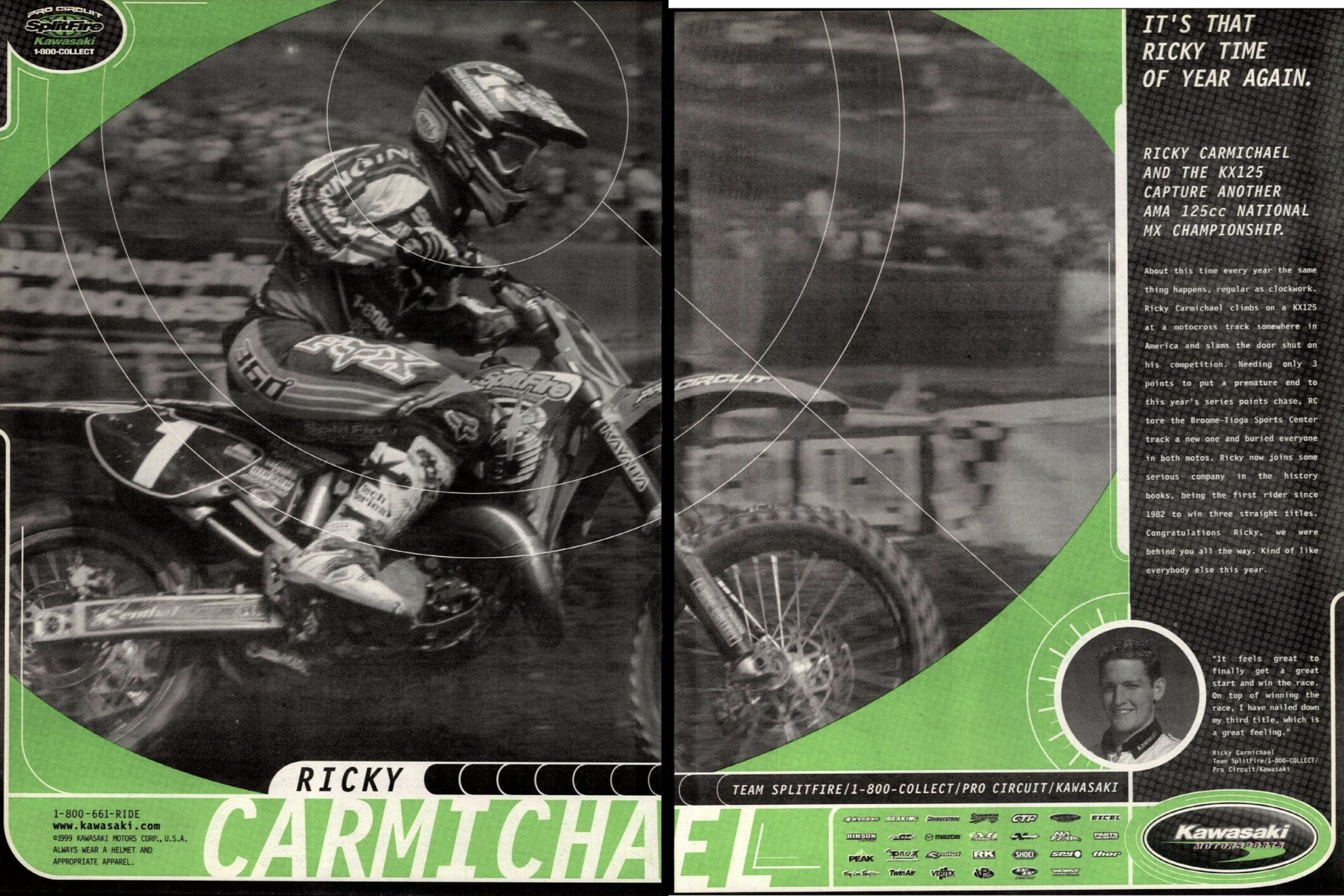 As we approach the opening round of the 2022 Lucas Oil AMA Pro Motocross Championship, we are counting down to the days by going through each of the 50 years in the history of AMA Pro Motocross. Today, the MAVTV+ Countdown hits 1999, the last of the 1990s, and honestly the last chance for mere mortals to win the premier-class title for some time to come.

Yes, that’s how 1999 would turn out when you look back in history. Ricky Carmichael was into the final of three dominant summers on a Pro Circuit Kawasaki KX125. He had already tried moving to the 250 class for AMA Supercross in ’99, but he crashed, crashed, and crashed some more. He and the King of Supercross Jeremy McGrath can laugh about it now, but in the summer of ’99, RC went back to the 125 outdoors and went back to his usual domination.

The 1998 AMA 250 National Champion was Doug Henry, but Doug kind of looked at ’98 as a career capstone, and he went into semi-retirement for 1999. He raced just a few supercross races and didn’t give the nationals his full effort, although in typical Henry fashion he still got fast at one point and won the overall at Kenworthy’s in Troy, Ohio. He took sixth in points.

Just as ’98 was a career capstone for Henry’s long journey, 1999 would end up being similar for Greg Albertyn. In 1995 “Albee” came to America on the heels of three FIM Motocross World Championships. Supercross was tough on the South African, though, as he was too advanced in his career to drop back into 125SX and develop the craft. Instead he was thrown into the deep end of 250SX (now 450SX) and he was often injured indoors, hurting his prep for the Pro Motocross Championship. Outdoors, Albee was very fast, but again too crash-prone to get the title he wanted. In ’98 he found some consistency and finished second to Henry in the standings, setting up a run in ’99.

By ’99, though, Albee was no longer the new fast thing coming from overseas. Frenchman Sebastian Tortelli, the ’98 250 World Champion, had moved to the U.S. with Honda, and while he too struggled in supercross, he absolutely did not struggle in motocross, going 1-1 at the season opener at Glen Helen in an all-time ride. Unfamiliar with the concrete start pads used at some nationals at the time, Tortelli suffered horrible starts in both motos but raged through the pack both times, from outside the top twenty to dominant moto wins. It was a statement, for sure. (Here is a Re-Raceables Podcast we did with Seb himself on that incredible AMA Pro Motocross debut)

Albertyn was down in the first turn in those motos, and the only rider even close to holding off Tortelli was Jeremy McGrath, who at this point was on a supercross-only contract, and simply racing Glen Helen as a favor to his sponsor, Chaparral, a big shop nearby. McGrath, by the way, had taken yet another AMA Supercross Championship in ’99, outlasting his rival Ezra Lusk of Team Honda. McGrath would win half of the 16 rounds and with them his fifth AMA Supercross title in six years.

Albertyn didn’t start building his title case until High Point, when he finally cleared up those first-turn crash woes and went 1-1. At the same time, Tortelli was still suffering with starts and couldn’t replicate his Glen Helen magic. Then Tortelli’s Honda teammate, Kevin Windham, caught fire and started winning races, also, leading to a pretty exciting title chase with no one rider reaching dominant status. Tortelli, Windham, Henry, Lusk, Mike LaRocco, Jimmy Button, and Albertyn, made for seven winners in 12 races! One rider who surprisingly did not get an overall win was 1996 and 1997 250 National Champion Jeff Emig, who struggled all year and eventually lost his ride at Kawasaki after a run-in with the law while partying in Lake Havasu. For the most part, though, the 250 Nationals felt wide open. It would be a long time before the 250 class would see that again.

Again, we’re getting ahead of ourselves. Tortelli crashed at Unadilla and broke his wrist, ending his season. Albertyn outlasted Windham’s run to emerge as the AMA 250 National Champion. He was the first foreign-born champ in the series since that incredible 1991 campaign from Jean-Michel Bayle, and Suzuki’s first 250 National Champion since, incredibly, Kent Howerton back in 1981! Roger De Coster and Albertyn had come to rescue Suzuki’s U.S. effort in 1995. Success didn’t come overnight, but the building blocks they put in place would pay for decades to come (only, with De Coster and Albertyn’s mechanic Ian Harrison eventually departing for KTM and continuing their success over there).

Anyway, Windham ended up second in points but he would have plenty of chances to get this 250 title. So would Tortelli. Right?

Oh, in the 125s Carmichael’s stiffest competitor was a surprise. Journeyman Tallon Vohland was from Northern California but went to Europe for years of GP racing just to keep his career going. He finally returned to the U.S on an FMF Honda and was very fast. He got an overall win at Budds Creek. Later in the summer Carmichael got into a starting slump and that opened the door for a few riders to steal some wins, like Nick Wey taking his only career overall at Spring Creek, and Brock Sellards winning at Washougal. Also, Washougal home-track hero Jason McCormick won the second moto at Washougal, a popular victory. Overall, Carmichael was still the man in the class and romped to the title with over 50 points to spare on Sellards and Vohland.

Here is Washougal ’99, one of Ricky Carmichael’s all-time best days, though it’s a rare one in that he actually lost. RC crashed off the start in both motos and came from dead last to second each time, only to lose the overall to the 1-3 of Brock Sellards:

The only place where it didn’t come together for Carmichael was the Motocross of Nations in Brazil. He crashed off the start and broke the throttle cable on his KX125 in one moto, and then had his pipe smashed off the start in the other. Windham and LaRocco rode okay for Team USA, but not exceptional, and Italy emerged with the win at the event.

A few other events during the off-season were notable. First, Kevin Windham topped the USGP at Budds Creek after being inspired by a comment by Belgium’s Stefan Everts that the Americans were too scared to line up and race against him and the other GP stars. And Jeff Emig blew everyone’s minds when he came out of exile on an FMF-backed Yamaha YZ250 and won the U.S. Open of Supercross. Unfortunately, it was the last win of Emig’s professional career as two big injuries were about to come, both while practicing. First, he snapped both wrists on New Year’s Eve as he prepared for the SX opener, and then just before the outdoor opener he broke his leg and back at Glen Helen, which forced him into retirement. And the FIM World Supercross Championship came to America in November of ’99 at the Rose Bowl in Pasadena and Honda’s Ezra Lusk won in front of a very sparse crowd.

One other thing happened that off-season that would have a huge effect of SX/MX moving forward. Ricky Carmichael’s mentor Johnny O’Mara convinced him that if he was ever going to beat Jeremy McGrath in supercross, he needed to get in much better shape. He then introduced Carmichael to Aldon Baker, a professional trainer from South Africa who had a comprehensive plan of attack that would change the whole industry. Because once Ricky got in the shape that Baker prescribed, he would become a dominant force, as we will soon see. Stay tuned.