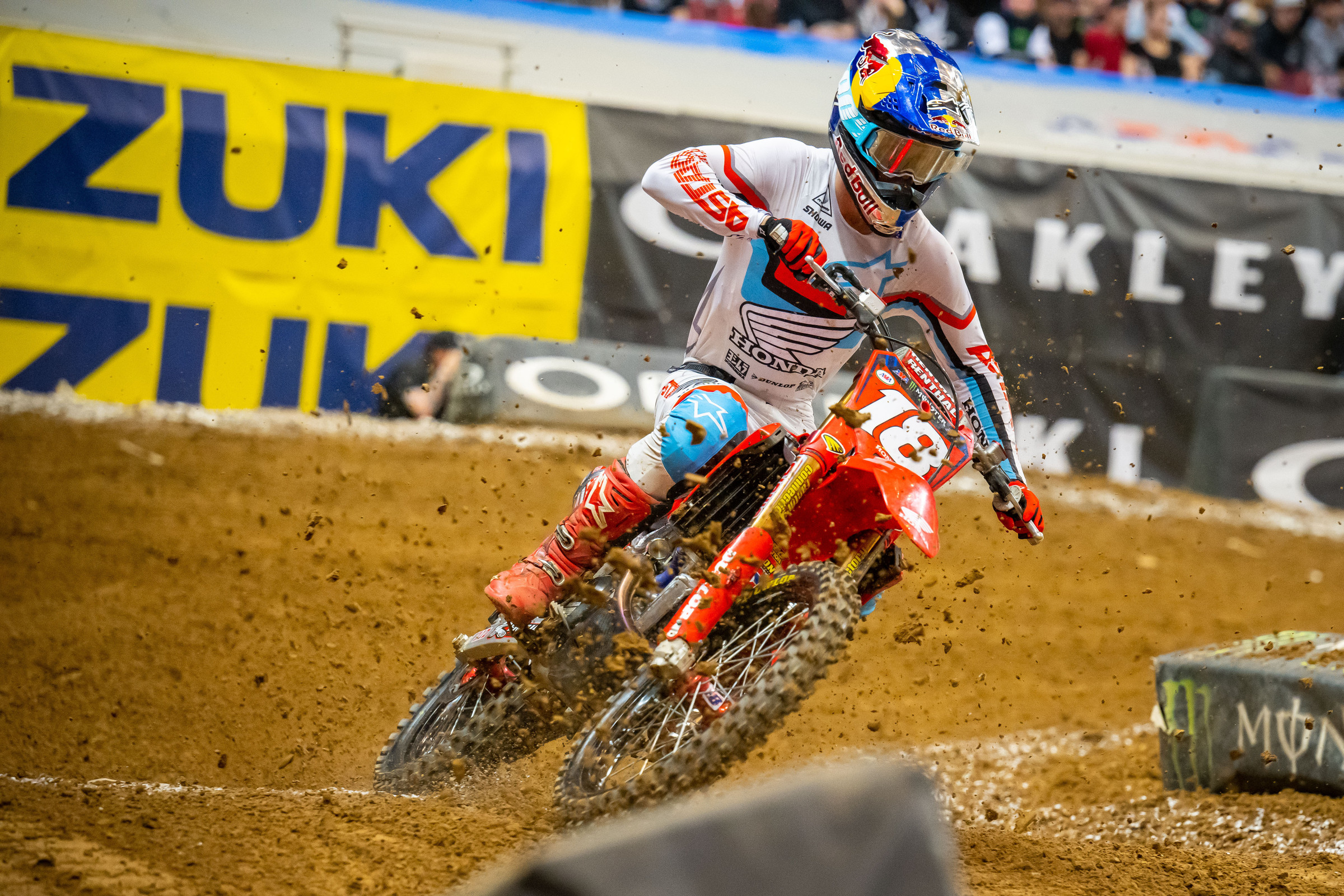 Championships don’t always go down to the wire, and 2022 almost assuredly isn’t going to be an exception. With both Eli Tomac and Jett Lawrence maintaining huge points leads, there’s a pretty significant possibility that both the 250SX East and 450SX championships will get sealed up this Saturday night. Let’s jump into the possible scenarios.

In the 450SX class only Tomac, Jason Anderson, Justin Barcia, and Malcolm Stewart are in mathematical contention for the title. Tomac leads Anderson by 53 points, has 68 points on Barcia, and holds a 72-point lead on Stewart. For either of them to even stay alive, Barcia would have to make up 17 points on Tomac, while Stewart would have to make up 21 points this weekend. Short of injury, sabotage, or the Monster Energy Yamaha Star Racing rig getting picked up by a tornado and dropped in the Atlantic Ocean, this simply isn’t happening. Unless something catastrophic happens, both Barcia and Stewart will be eliminated on Saturday.

The situation is only slightly less grim for Anderson, who can’t afford to let Tomac beat him this weekend. If that happens, Tomac clinches no matter what. The only way for Anderson to stay alive is by taking two or more points out of Tomac’s lead, which could easily happen. Anderson’s beat Tomac a handful of times already this season, and just last week he made up three points. But even if Anderson does beat Tomac, it’s not a guarantee that he keeps the championship going. For example, if Anderson finishes fourth and Tomac takes fifth, Anderson would only make up a single point on Tomac, which isn’t enough. As long as he finishes third or better, and finishes ahead of Tomac, he’s in it for another week. Otherwise, Tomac will be popping champagne in title town.

In the 250SX East Region only RJ Hampshire is still able to challenge Lawrence for the title, but saying Hampshire is in the hunt is like saying balsa wood is a good material for construction. Lawrence has a 47-point lead over Hampshire, which means Hampshire would need to make up 22 points to take this title to the wire. This means that if Hampshire took second, he’d have to have Lawrence finish in dead last. If Hampshire won, he’d need Lawrence to finish 19th or worse. Lawrence’s worst finish so far this year has been third, so about the only hope Hampshire has is if Lawrence misses the night show because he went out for donuts instead.

The real story here is the legacy that Lawrence is already beginning to build. He’s only 18, already has a 250 National Championship to his name, and will likely become a supercross champion this weekend. Winning a 250SX title in his third try isn’t particularly rare or special, but Lawrence would join a small list of people who have won both a Lucas Oil Pro Motocross and Monster Energy AMA Supercross title while they are still a teenager.

The trend coming from the amateur ranks of late has been that of a more reserved approach to transitioning riders into the professional ranks. Riders like Seth Hammaker and Levi Kitchen are even examples of riders who were no longer teenagers when they eventually turned pro. Lawrence won the Pro Motocross championship as a recently turned 18-year-old and now sits on the doorstep of a supercross title as well.

The last person to have claimed both titles as a teenager was Ryan Dungey who bookended a double title year in the 250 class in 2009 with a narrow victory over Christophe Pourcel in Pro Motocross when he was 19 years, 9 months, and 1 day old. Since 2000, only four teenagers have been able to win both an AMA Supercross and Pro Motocross title before exiting their teenage years. James Stewart was the youngest to do so when he clinched the 2003 125cc West supercross title at 17 years, 3 months, and 22 days old. Travis Pastrana was the next youngest when he clinched the 2001 125cc East supercross title at 17 years, 5 months, and 30 days old. Ryan Villopoto became the first rider to do so during the four-stroke era and was 18 years, 6 months, and 4 days old when he completed the double. And then the aforementioned Dungey was three months away from his 20th birthday when he finally claimed both titles as well.

This Saturday, Lawrence could become the fifth person to do it in this century as he would be 18 years, 8 months, and 14 days old when the checkered flag waves in Foxboro. As a further reference, riders like Eli Tomac (20 years, 9 months, 3 days) and Cooper Webb (20 years, 9 months, 10 days) were both more than two years older than Lawrence is now when they added Pro Motocross titles to their AMA Supercross championships. Lawrence would be the fourth youngest to do it since 2000 and the first teenager to do it in more than a decade.

It's rarified air, and although it doesn’t guarantee success, every single rider he’s around on that list went on to win multiple 450 class titles as well. That is, of course, barring Travis Pastrana whose career path worked out pretty well anyway. Time will tell if Lawrence also racks up the monumental victories and titles the others on that list also achieved, but there’s no question he’s laid the foundation for that success already and this weekend’s potential title clincher would simply be another step up the ladder for the young Australian.