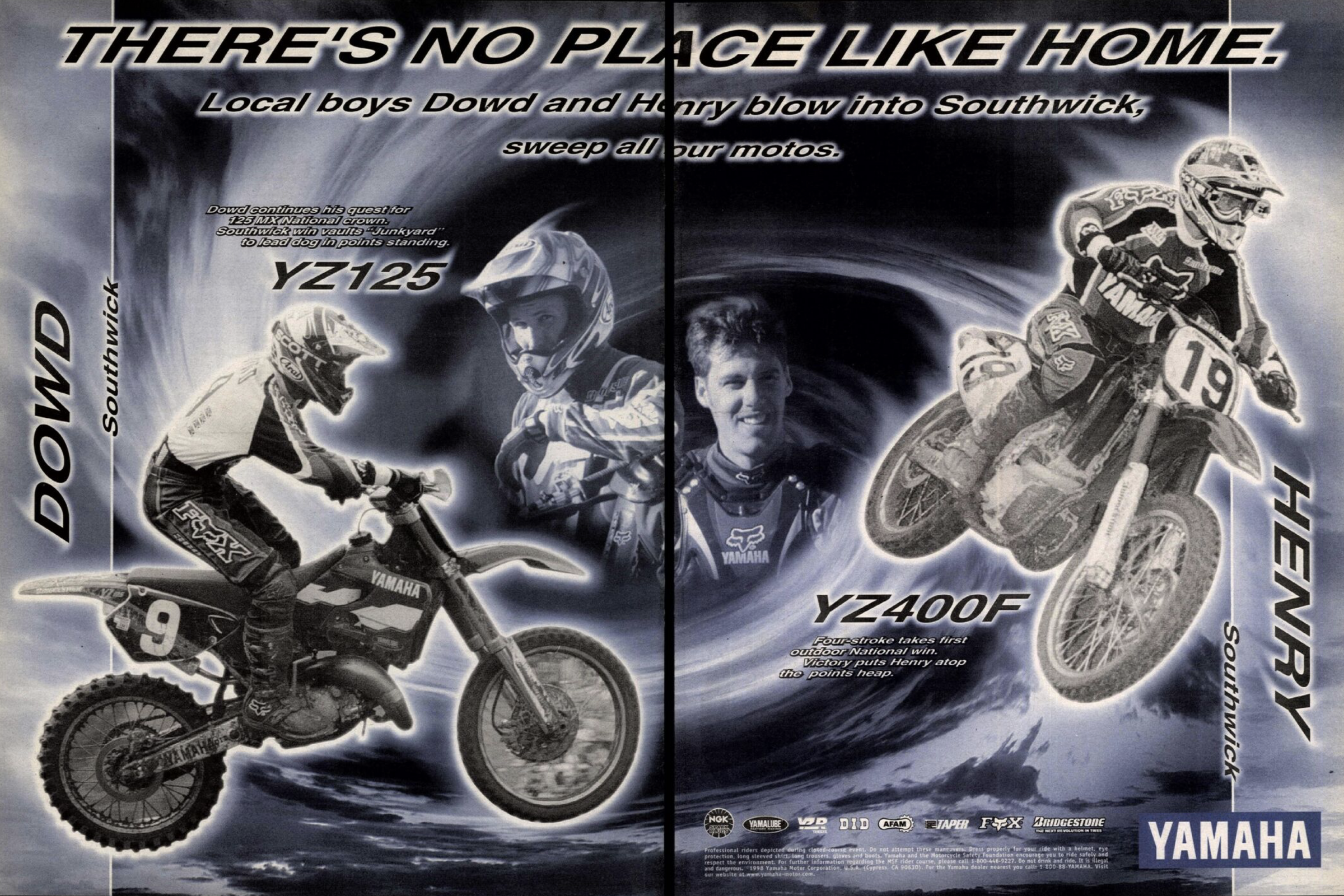 As we approach the opening round of the 2022 Lucas Oil AMA Pro Motocross Championship, we are counting down to the days by going through each of the 50 years in the history of AMA Pro Motocross. Today, the MAVTV+ Countdown hits 1998, a historic year for a legendary rider.

In 1995, Doug Henry entered the 250 class after back-to-back 125 National Motocross Championships, and immediately made an impact on a 250, battling his Honda teammate Jeremy McGrath for the early-season points lead. Then he suffered a horrific, nearly career-ending crash at Budds Creek, Maryland. He would return for the 1996 season, and now with Team Yamaha, but he was just working his way back into shape, with most of the season being forgettable, save for a surprise moto win at Washougal. By ’97, though, Henry could be a contender, especially since he started the AMA Supercross season strong and leading the points early in the year. But Henry had a curveball thrown his way for Pro Motocross. Yamaha asked him to ride its experimental YZM400 four-stroke prototype instead of a YZ250. At Budds Creek, ironically, the bike cut out on a jump and Henry crashed again, breaking both of his arms. 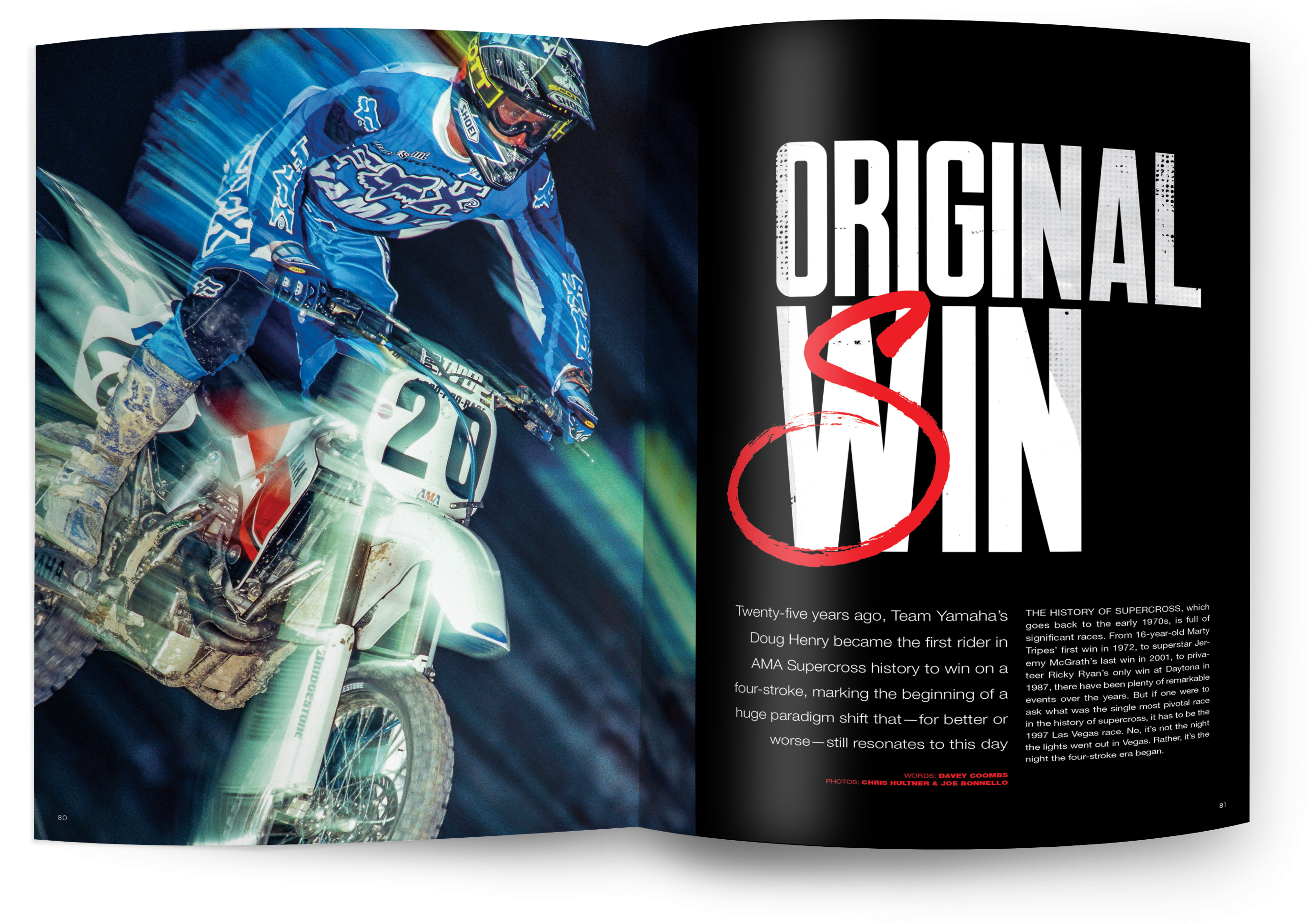 Twenty-five years ago, Team Yamaha’s Doug Henry became the first rider in AMA Supercross history to win on a four-stroke, marking the beginning of a huge paradigm shift that—for better or worse—still resonates to this day.

For the 1998 nationals, Henry was back on a thumper, this time the new production version of his old works bike, the YZ400F. He would face a loaded field, starting with Jeremy McGrath, who was now back on top of the supercross world after his failed Suzuki experiment in ’97. McGrath was also on a Yamaha in ’98, albeit a traditional two-stroke, and he regained his supercross crown. There were so many fast riders starting the ’98 nationals, but MC was the favorite, especially with 1996 and ‘97 champion Jeff Emig in a huge funk.

MC went 1-5-2-1 at the first two motos, then crashed at High Point and called it a summer with a broken wrist. He had hurt it back at the Pontiac Supercross but pulled through for the stadium title. Outdoors, he was good until the wrist finally gave out. This opened the door for many, including Honda’s new recruit Ezra Lusk, who won High Point. Then the series went to Southwick, and Henry edged Lusk to win at his home track. It was on. Henry and Yamaha had the big 400 dialed in enough, and Henry methodically began to stretch his points lead.

A four-stroke title was looking likely, but then Emig suddenly caught fire at RedBud, as he usually did, and started winning motos. Emig had struggled in the early rounds with some mechanical problems and just generally uninspired riding, but by midseason he was back on form and making a late comeback bid, just like the ones that led him to the 1992 125 National Championship and 1996 250 National Championship. Alas, this one would not work out the same, as Emig broke his thumb at Millville but still managed to win the race. After that, he had to call it a season.

Henry held on for a monumental title run, the first four-stroke to do so in modern times. Just a year earlier, the idea of a four-stroke beating two-strokes in the U.S. seemed impossible. By 1998, the new bike had just added to the incredible legend of Doug Henry. By the way, in ’98, he won the overall at Budds Creek, the track that had hurt him so many times before. Stories like that are the way Henry always played it.

There was much less to worry about in the 125s. Everyone knew Ricky Carmichael was the man to beat following his rookie-season 1997 title run, and he cleaned up again. His main challenger was another Yamaha rider, John Dowd, who at this point was 33 years old but still getting faster! Famously, Carmichael’s Pro Circuit Kawasaki KX125 blew up at Southwick and Dowd won the 125 class (he straight up beat RC in moto two that day, a rare feat) and he and Henry, local products, swept the two classes that day. The New England fans were loving it, and Dowd left with the points lead thanks to RC’s DNF. Carmichael, of course, started clicking off moto wins to take the title for the second year in a row. Second to Carmichael is kinda’ like a title for Dowd.

The year 1998 also marked the first of Carmichael’s many epic winning streaks. It started with the 125SX East Region opener and ran the whole series through the East-West Shootout in Las Vegas, then he added the outdoor opener at Glen Helen for ten in a row. His 125 SX tour in ’98 was the first undefeated series anyone had had since Can-Am’s Jimmy Ellis won all four rounds of the 1975 AMA Supercross Championship. This is the Hangtown crash that ended Carmichael’s ’98 streak:

Back to the ’98 AMA Supercross Championship, which once again went to McGrath, though this time he was on a Yamaha, as mentioned above. He wasn’t nearly as dominant on the blue bike as he was on red one two years earlier, winning seven rounds in ’98 compared to 14 in ’96, but he was much, much better than he was on the Suzuki in ’97. And what of the defending champ in ’98? After finishing second in the opener to the surprise winner Sebastien Tortelli of France, Emig went into a puzzling slump that saw Kawasaki eventually lead him to take a break from racing. He eventually got himself reset and sorted, and even reeled off some outdoor wins, but then he broke his thumb, dashing his hopes for a late-season comeback to win what would have been a third straight 250 AMA Pro Motocross title.

Here’s a little bit of bench racing trivia for you: Two Frenchman, Sebastien Tortelli and Mickael Pichon, won the ’98 AMA Supercross and 250 Pro Motocross openers, respectively. It would later turn out to be the one and only SX win for Tortelli and the one and only AMA National win for Pichon.

The ’98 Motocross of Nations went terribly for Team USA. At Foxhill in England, the rain never stopped, and the track became almost impassable. Carmichael never got to show what he had, nor did Dowd. One highlight was Henry, in his only Team USA appearance, scoring the first moto win overall, showing his New England mud skills. The rest of the day was tough and Stefan Everts led the Belgian team to the win in one of the most dominant individual performances ever seen at the MXoN. It would not be his last.

Finally, 1998 was a big year for Racer X Illustrated in that we turned our little regional newspaper into the glossy national magazine it is today. Some 25 years later, we’re still going strong!