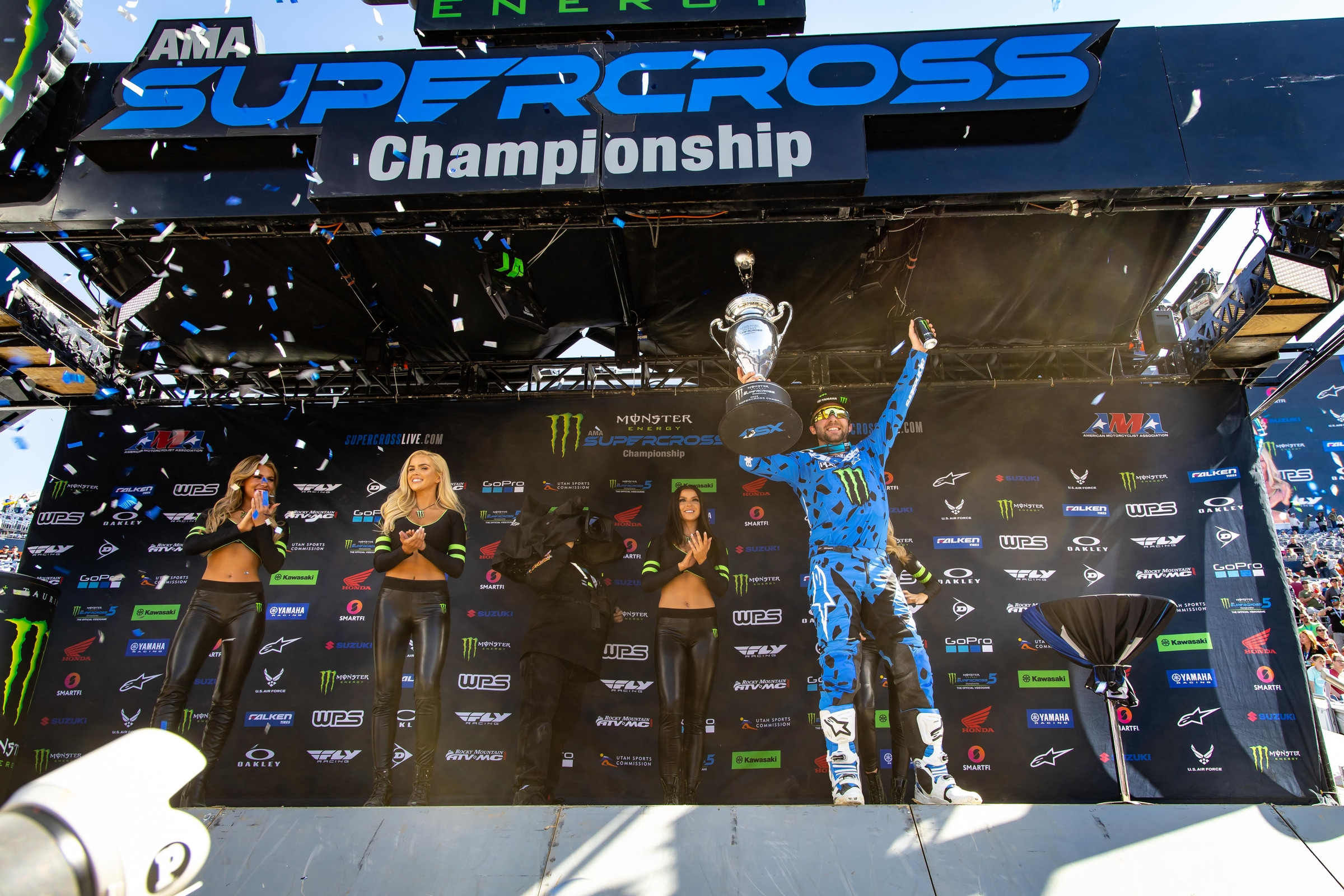 Eli Tomac will not be competing in this weekend’s Monster Energy AMA Supercross final round, which will make this race the first supercross he has missed since 2018’s round two in Houston, and just the second round he has missed since the start of his second 450SX season in 2015.

But we’re not here to talk about durability, we’re here to square Eli’s latest title in the history books and see exactly where he stands. Numbers don’t always tell the whole story of an athlete’s career, but no doubt this 2022 campaign has boosted Eli’s profile in time overall.

First, the number you have heard a lot: seven wins this year has taken Eli into a tie with Chad Reed for fourth on the all-time SX wins list (44 wins). Jeremy McGrath of course lays way ahead at 72, but Ricky Carmichael (48) and James Stewart (50) are potentially within striking distance for Eli. Racing is fickle, though, because when Eli won five-straight at mid-season it looked like overtaking Reed was inevitable. They will go all the way into next season still tied.

Yes, there will be a next season. Tomac said he is currently working on his deal for 2023 with Monster Energy Yamaha Star Racing.

Okay, on to the biggest stat, regarding championships. Eli Tomac is the eighth rider in history to get two (or more) premier class SX and MX titles.

Yup, only seven other riders in history won multiple titles in the premier class indoors and outdoors. Who are they? Well, they’re legends and Eli just joined them.

Rick Johnson: RJ is tied for second with seven titles on bigger bikes, which includes two AMA Supercross Championships. RJ also has three 250cc National Motocross Championships, but the big kicker is that they also raced 500s in RJ’s day, and he won two titles in that division as well.

Ryan Dungey: Dungey is tied with Johnson with seven premier-class championships. He has four in AMA Supercross and three in the 450 class of AMA Pro Motocross.

Jeff Ward: In the mid-to-late 1980s, if it wasn’t Johnson, it was Ward, as these two led the pack routinely for several years. Wardy was extremely versatile, becoming the first rider to ever win all four major AMA National Championships: 125MX, 250MX, 500MX and 250 Supercross. We’re counting the big-bike titles here, and Ward has six: two in 250 supercross, two in 250MX, and two in 500MX.

It’s worth noting that even if we didn’t count the 500s for this, Johnson and Ward would still remain in this elite club of riders to win multiple premier class titles indoors and out, as each have multiple AMA 250 Supercross and AMA 250 National Motocross crowns.

Bob Hannah: The first man to really start racking up multiple titles in multiple series, the “Hurricane” was up to force in the late 1970s and won three-straight AMA 250 Supercross Championships and two-straight 250cc National Motocross Championships.

Eli Tomac: Welcome to the party, big boy. Eli is now the eighth rider to have more than one title in both main classes: three in AMA 450 Motocross and now two in AMA 450 Supercross. Eli has five big bike titles now. Can he get more?