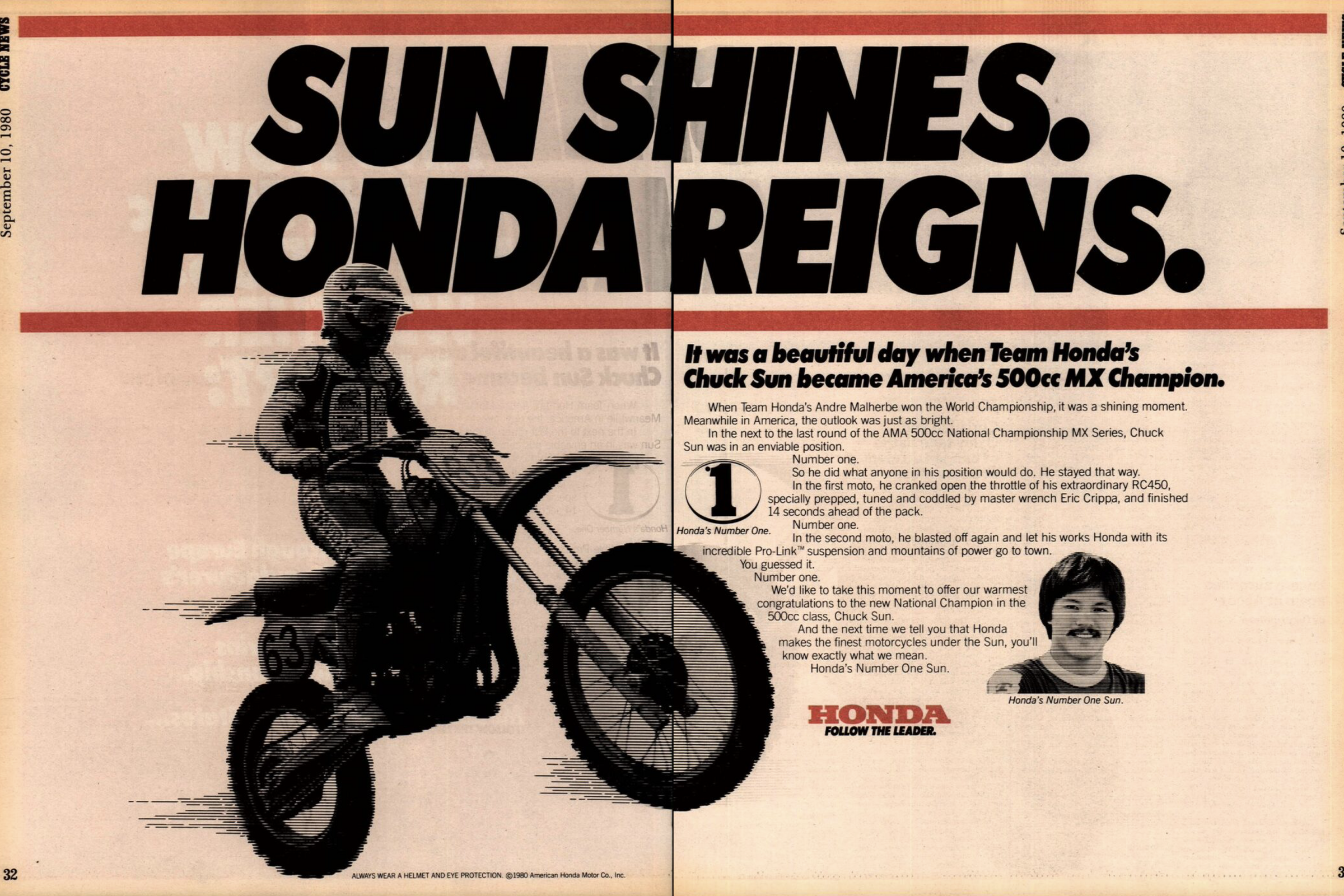 After taking a short Easter break, we are back into our MAVTV+ 50-Day Countdown to the kickoff of the 2022 Lucas Oil AMA Pro Motocross Championship. We have reached 1980, another pivotal year in the sport. The AMA Pro Motocross Championship was growing as was AMA Supercross, which by now was up to 17 rounds—the amount they actually are running 2022. It was readily apparent that SX was gaining more and more importance to the OEMs as well as race fans.

The AMA Pro Motocross nationals ran 11 different rounds, split this way: three 125/250 rounds, then four 250/500 rounds, and finishing with four 125/500 rounds. The events also still overlapped with supercross, so there was a different type of race practically every weekend. (And when the nationals ended in September, a four-race “Trans-USA” series was still running, though without any Europeans to speak of participating, that tour was on its last legs.) Among the tracks on the 1980 schedule that are still there today were Hangtown, Southwick, High Point, RedBud, Lakewood (though in a slightly different spot than where Thunder Valley is today) and, for the first time, Washougal. (Also, Unadilla was a part of the Trans-USA series.)

Also, by 1980 we were getting to the end of the line for many of the European motorcycle brands that dominated the early days of American motocross, as the Big Four from Japan had outspent and out-paced the manufacturers from Germany, Spain, Czechoslovakia and even the Swedish Husqvarna brand, which was a shadow of its former self. For example, the 1980 Oakland SX, the third of the series, only had a single European bike in the main event, ninth-place finisher Dan Turner’s Maico.

Nineteen-eighty also started with a giant hole in the field as Bob “Hurricane” Hannah had shattered his leg in a water-skiing accident and would miss the entire season, basically opening the door to a bunch of new superstars. Into the void first rode Hannah’s Yamaha teammate Mike “Too Tall” Bell, would win sweep the SX series’ doubleheader opening at the Seattle Kingdome and never look back. He would eventually clinch the title early, and then for good measure win the very last round in October in San Diego, a race without a single European bike in the main event.

As far as AMA Pro Motocross goes, Suzuki’s Mark Barnett and “Flying” Brian Myerscough would get the jump on three-times-running 125 National Champion Broc Glover, who Yamaha was finally letting race SX full-time as well. Glover would end up fourth in the AMA Supercross standings and win a few rounds but going back-and-forth between 250 indoors and 125 outdoors seemed to affect him a little more than “Bomber” Barnett, who finished fifth in the final SX standings, but got the edge on Glover in the final 125 Pro Motocross standings (215 to 205).

In the 250 class Barnett’s Suzuki teammate Kent Howerton was dominant, topping Mike Bell by nearly 70 points in what would be his second AMA Pro Motocross title. (Howerton also won the ’76 500ccc National title.)

And in the 500 class Chuck “the Rising” Sun of Oregon gave Team Honda its first AMA Pro Motocross title since Marty Smith’s last championship in 1977. Sun topped Kawasaki’s Goat Breker and the now-Suzuki-mounted Smith in the final standings there.

There were two other especially bright moments for American motocross in 1980, and one terrible tragedy. First, privateer LOP Yamaha rider Marty Moates finally became the first American to win the 500cc U.S. Grand Prix at Carlsbad with a dominant 1-1 win, while semi-privateer Johnny O’Mara shocked the world at the Valvoline 125cc USGP at Mid-Ohio with a win aboard his white Mugen Honda—his first success as a professional. The tragedy came in the fall when the highly respected veteran Gaylon Mosier, riding for Team Kawasaki, was hit by a truck and killed while cycling near Unadilla, New York, just before the Trans-USA race there. He was 26 years old.